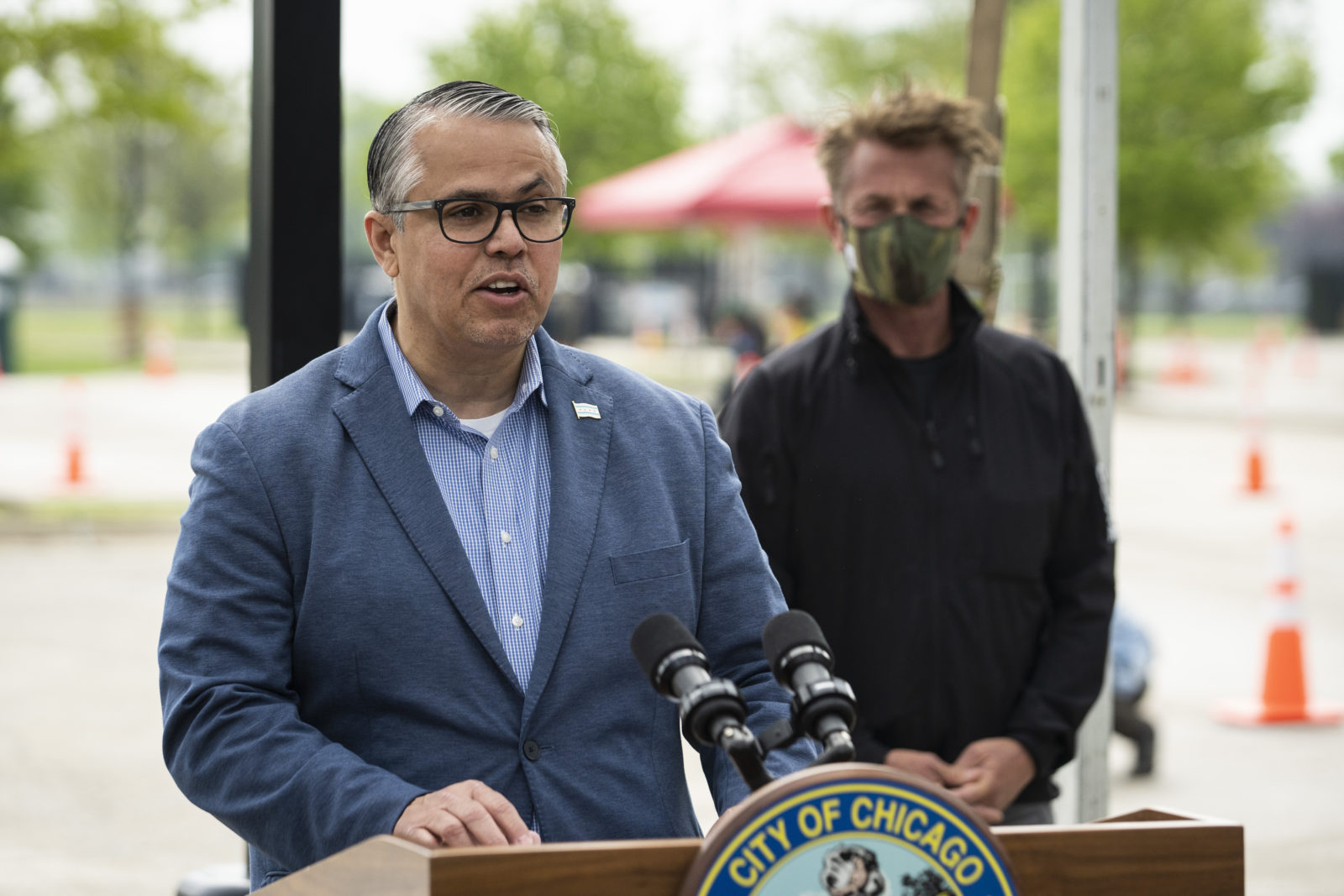 The Chicago alderman is running as a moderate in a new, heavily Latino district

Less than two months into an election year, Chicago is living up to its reputation for hard-nosed politics. In one race, two Democratic incumbent members of Congress are locked in a heated battle filled with allegations of corruption. In another, more than a dozen candidates are running to replace Rep. Bobby Rush (D-IL), who is retiring after 30 years in Congress.

The primary is not until June, and given the more hectic happenings in nearby races, Gilbert Villegas and Delia Ramirez have not attracted much attention beyond this district that is a hub of the city’s Latino community.

Villegas, a longtime union organizer, is running a moderate campaign, emphasizing public safety. He has been endorsed by fellow Marine Rep. Ruben Gallego (D-AZ) and VoteVets, a progressive veterans organization. Ramirez, a state representative, recently won the backing of Emily’s List, the Chicago chapter of the Sunrise Movement and Rep. Lauren Underwood, an Illinois Democrat who represents the northern and western suburbs of Chicago.

“Seemingly, [Ramirez is] going to be running a campaign that’s probably to the left of Alderman Villegas,” said Frank Calabrese, a Chicago political consultant who works with Villegas in his city council work but is not involved in his congressional campaign. “But she’s not really engaged in the type of rhetoric that kind of is identified with the other members of the Squad, because she just doesn’t really talk about national foreign policy issues.”

At the start of this year, Villegas led the race in fundraising, bringing in $386,000 in the fourth quarter of 2021 to Ramirez’s $113,000. But Villegas entered the race in November, a month before Ramirez, giving him additional time to fundraise. A third candidate, Iymen Chehade, raised just $41,000.

Chehade, a college professor and the son of Palestinian immigrants, serves as a foreign policy advisor on the nearby campaign of Rep. Marie Newman (D-IL). A report published last month by the Office of Congressional Ethics found that Newman had agreed to employ Chehade based upon an agreement that he not challenge her in her 2020 congressional campaign. OCE concluded that Newman may have violated both federal and House laws.

“Right out of high school, I went to the Marines. I actually turned 18 in boot camp,” Villegas, a Chicago alderman, told Jewish Insider in a recent Zoom interview. “I’ve always had a willingness to serve.”

Ramirez’s campaign team did not respond to several interview requests from JI.

Villegas was born and raised in Chicago, and he points to his upbringing in the city as his reason for running for office. His father, a Vietnam veteran, died when Villegas was 8. He and his younger brother were mostly raised by a single mom, and it was through public assistance programs that she could provide for the family.

“With the survival death benefits, it allowed her the ability to work with dignity, because it allowed her the ability to make sure that after work, she could come home, be sure we were doing our homework, making sure that two boys in the city of Chicago were doing their best to stay out of trouble,” Villegas, 51, recalled. “So I have an appreciation for those types of programs.”

At the same time, his grandmother took on an unofficial role of political liaison in her neighborhood. Born in Puerto Rico, she worked in food service at O’Hare International Airport. The neighborhood where she and Villegas’ family lived was in a moment of transition, from a heavily Polish and Ukrainian immigrant population to a Latino one.

“I remember my grandmother, who was bilingual, at the time having the ability to speak to the newly arrived immigrants and explaining to them the political process,” said Villegas. She also brought political candidates to meet immigrants and first-time voters in her neighborhood, and those connections helped the Villegas family: She reached out to one of those politicians to help Villegas’ mother get the public benefits she was owed.

“I was exposed to politics at a young age, and seeing how impactful politicians could be in people’s lives and how the policies affected us,” noted Villegas. Later, he took on a similar role with the Teamsters when he drove a truck for a Chicago bakery.

“I found myself in that same scenario where I would have dock workers and drivers who were career workers there, but really didn’t understand the importance of a contract,” said Villegas, who then became a union representative, serving as a go-between for management and workers. “They would always come to me with grievances, and then I would help them navigate the process of making sure that the companies that we represented were adhering to the contract.”

Both candidates will need strong ground games to introduce voters to new congressional candidates. A plurality of voters in the district were previously represented by Rep. Chuy Garcia (D-IL), whose district has shifted.

“First, you have to convince people they’re in this district and that they should vote, and when they see the names on the ballot for Congress that they’ve never seen before for Congress, they have to have some reason for making the choice,” said Dick Simpson, a professor of political science at the University of Illinois Chicago and a former Chicago alderman. “That’s why getting the message out is so important in this particular race.”

Garcia’s endorsement could have a strong impact on the race. He has supported Ramirez in previous races, but has yet to officially endorse her in this one. Garcia, a staunch progressive, was one of eight House Democrats to vote no last September on legislation that would have given $1 billion in supplemental funding to replenish Israel’s Iron Dome missile-defense system.

Villegas has garnered the support of a number of pro-Israel political organizations. Last month, the longtime union organizer was endorsed by Democratic Majority for Israel (DMFI) and also won the support of CityPAC, a local political action committee of Chicago professionals that supports pro-Israel candidates around the country.

“​​Gil’s experience in the Marines and being deployed to the Middle East give him a unique perspective on Israel’s right to self-defense and how Israel is an important U.S ally and partner in the region,” said Ryan Brown, a CityPAC board member. “We appreciate his pragmatic and thoughtful approach to policy and his long-term relationship with the local Jewish community in Chicago.”

Villegas traveled to Israel for the first time on a 2016 trip for Latino elected officials organized by Israel’s consul general to Los Angeles. He recalls being struck by the way Israel’s mandatory military service then yielded benefits in other fields. “Seeing how in the tech space, how those partnerships and those relationships turned from the military into business relationships — I thought that was fascinating,” said Villegas.

He also remembers going to Israeli communities near Gaza and seeing bomb shelters that were decorated with flowers to lessen the trauma for children who had to seek safety from Hamas rocket attacks, and going back to his position as an alderman energized to think about helping kids who live in Chicago’s most violent neighborhoods.

“In Chicago, we’ve had some issues with violence, and I wanted to bring that same program where the government would come in and step in whenever there was an incident and try to counsel the community to console those folks that were engaged in that type of activity,” said Villegas. He brought the idea to then-Mayor Rahm Emanuel, who told him the city already had such a program in place.

In his conversation with JI and in a position paper about his views on the U.S.-Israel relationship shared with members of Chicago’s Jewish community, Villegas pledged to be a supporter of Israel if elected to Congress, and said he would have supported the supplemental Iron Dome funding.

“I would have voted to support that appropriation just because of the fact that it just makes so much sense to make sure that we’re supporting our allies in the region,” explained Villegas. “The fact that this is becoming political gives me pause. Because when you have an ally, you have to support and work with that ally. You cannot attack it [and be] half-hearted. You have to be all in and support the only democracy in the region.”

In Villegas’ view, supporting Israel also involves opposing the Boycott, Divestment and Sanctions (BDS) movement. “I fought for America’s freedom, and I strongly believe in people’s right to express themselves, to protect that public speech, even on matters that I find distasteful. But the BDS movement is not an expression of policy differences,” said Villegas. “A movement that improperly singles out Israel, it holds them to a different standard, not applied to others. And so I think that when talking about BDS, we’ve got to call it what it is: antisemitism.”

He said he would support Congress potentially taking up anti-BDS legislation, depending on what form the bill takes. “If you have an ally, then you support that ally,” said Villegas. “If it does mean enacting legislation or passing resolutions to call that out, then definitely we should play around with that.”

Villegas criticized former President Donald Trump’s handling of the Iran nuclear deal but did not come out in favor of rejoining the 2015 Joint Comprehensive Plan of Action (JCPOA), instead urging a cautious approach to the ongoing nuclear negotiations.

“I’m dismayed by the Trump administration’s damage [to] America’s international credibility by abandoning [the] JCPOA,” said Villegas. “We’ve got to make sure that any deal moving forward has to take into account that until Iran wants to play nice in the area, we have to be concerned, given their past practices, that they’re still a threat.”

In a follow-up email to JI, Villegas explained that he wants to see a “better” deal. “I want to see the world fashion a better agreement because of how important it is to contain Iran’s nuclear ambitions,” he said.”

Villegas said he would support a two-state solution to the Israeli-Palestinian conflict, calling it “a great step towards peace in the region.” In his position paper, Villegas wrote that peace between Israelis and Palestinians must involve “recognition of the human rights of the Palestinians and efforts to alleviate their distress.” But he added that “their own supposed leadership does not work towards their benefit,” noting that the State Department has designated Hamas a terrorist organization.

Conversations with Jewish community members in the Chicago area have also led him to take a strong position on fighting antisemitism at the federal level.

“We have to make sure that we’re working closely with the communities that are being impacted in finding out what are some of the solutions that they have in place,” he said. “I know that the Nonprofit Security Grant Program that’s in place, we’ve got to make sure that it’s funded.”

The issues at the heart of Villegas’ campaign are local. “I just feel that Congress right now, it just doesn’t have enough focus on rising costs of working families,” said Villegas. It’s those cost-of-living problems that drive him — rising healthcare costs for seniors, low-paying jobs, public safety in Chicago.

But his memory of his years in the military, which took him around the world to Kuwait, Saudi Arabia, Japan and South Korea, continues to push him to serve. The Capitol riots on Jan. 6 put that ethos to the test.

“What I saw was America’s democracy under attack, and realizing how fragile our democracy is,” said Villegas. “I took the oath as a Marine to defend this country, against all enemies foreign and domestic. And that oath has no expiration date.”