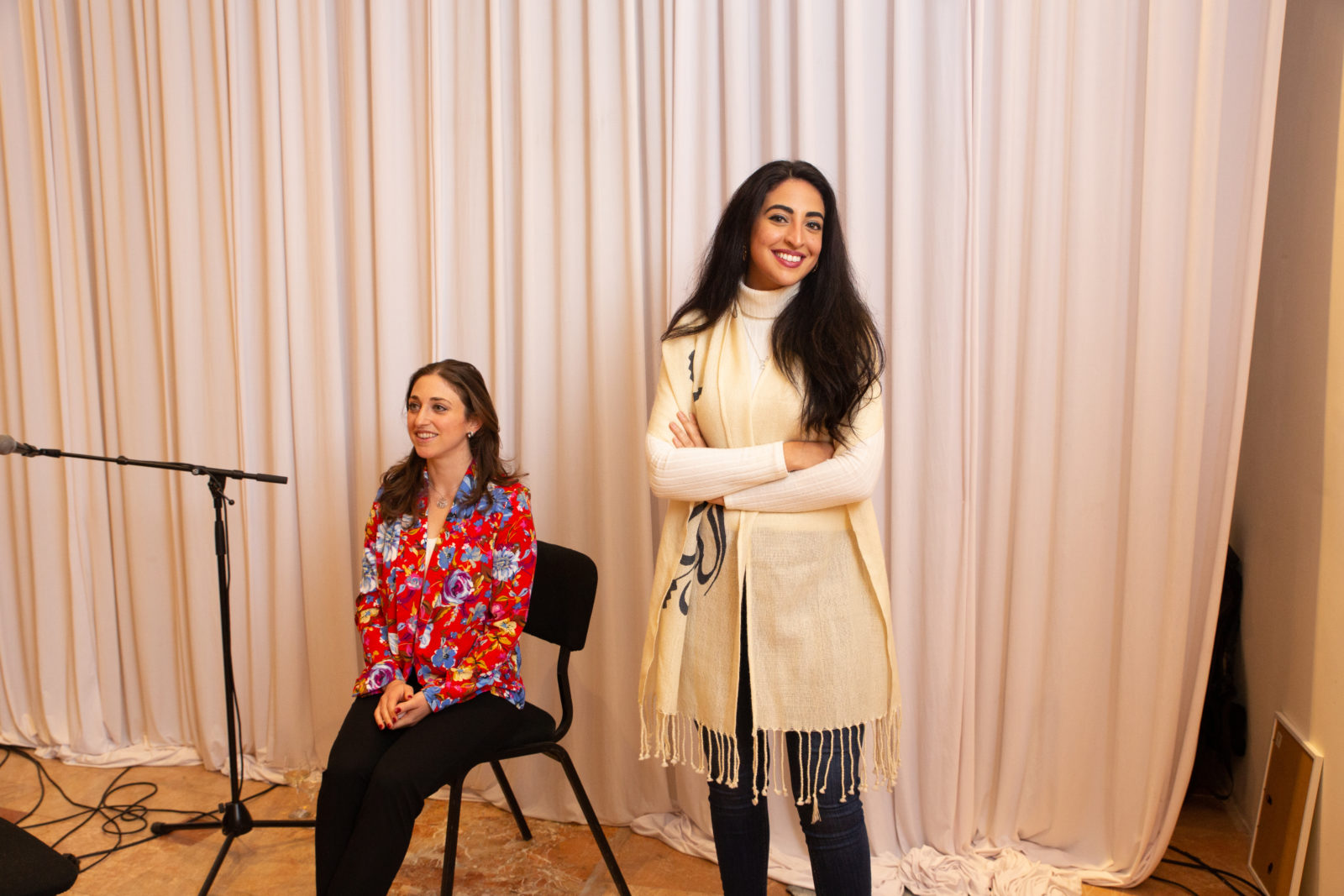 Peace is being written in new Israeli-Emirati art exhibit

In the flow and swirl of calligraphic scripts, Israeli and Emirati-based artists write a new story in wake of Abraham Accords

At a new Jerusalem exhibition featuring works by Israeli and Emirati-based artists, the writing is literally on the wall.

Entitled “Maktoub,” which means both “written” and “destined” in Arabic, some 29 pieces by 10 artists – five based in each country – display swirling calligraphic scripts in Hebrew and Arabic. The show is a result of the cultural flowering that is beginning to take root in the wake of the signing last year of the Abraham Accords between Israel, the United Arab Emirates and Bahrain.

Part of the monthlong 5th Biennale for Contemporary Jewish Art taking place in the city  through the end of the year, the exhibit, mounted in a quiet corner of the Jerusalem Theater, offers an eclectic mix of geometric and flowing letters, as well as words and texts forming mystical and defined shapes such as hamsas and horses, stars and circles.

And the twist? The co-curators, one based in Jerusalem and one in Dubai, in the UAE, like to paint letters belonging to each other’s languages.

“There are connections and similarities between the languages in the works and the way the artists think about letters, modernizing them and doing different things with the scripts — there is already a lot of common ground,” Lenore Mizrachi-Cohen, a New York-born artist of Syrian heritage, who conceived the installation and is one of the co-curators, told Jewish Insider in an interview last week.

Mizrachi-Cohen, 31, who made aliyah to Jerusalem two years ago, was raised in the Syrian-Jewish community in Brooklyn where Arabic customs and language are part of everyday life. The daughter of a sofer, or scribe, who works with Hebrew texts, Mizrachi-Cohen said that “Hebrew didn’t appeal to me in the same way Arabic letters did. Artistically, I have always loved the beautiful form and flow and curvature of Arabic.”

Being able to write in Arabic but not converse fluently has always been a source of frustration for the young artist. So has the lack of formal instruction in an artform that is strict and uncompromising in its rules.

“Even if it appears to be a more free-form, flowy type of script, it still has its own structure and to the trained eye it looks ridiculous if you’re not doing it properly,”  Mizrachi-Cohen, who taught herself using videos, told JI.

It was this frustration that led Mizrachi-Cohen to connect with teachers in the Arab world — easy when she was living in New York but a challenge that proved harder after she moved to Israel.

But in the summer of 2020, after the signing of the Abraham Accords,  Mizrachi-Cohen described having a “light-bulb moment.”

“My brain just started turning and I was like, ‘This is amazing, because I’m sure that there are other artists who would also benefit from having in-person instruction,’” she recalled. “I said, well, if a bunch of artists are coming together, we should do a residency together, then we will also have the opportunity for a cultural exchange. It would be a real opportunity for connection and learning.”

Mizrachi-Cohen reached out to Moroccan-born, Dubai-based artist and jeweler Chama Mechtaly, who joined her in curating the exhibition. For more than 13 years, Mechtaly, 30, who was raised Muslim but has Jewish roots, has used visual arts to explore her own and Morocco’s Jewish heritage. A social activist, she works to build bridges between Muslims and Jews, advocating for more recognition of Jewish and Mizrahi history in the region.

“I grew up in a Muslim context and only knew about Jews from the lens of the Palestinian conflict,” Mechtaly, who studied at Brandeis University in Boston, told JI in an interview. “It was quite disruptive to learn that my grandfather came from a Jewish family, and I sought to understand what that meant.”

Mechtaly’s journey has taken her from painting portraits of indigenous Moroccan Jewish women to Hebrew calligraphy work — featured in the exhibition — that includes a reimagined Moroccan flag bearing a six-point Star of David in place of the five-point pentagram and the word “Shalom” in Hebrew interwoven with Amazigh symbols, referencing the North African indigenous ethnic group.

Her artwork, she said, draws a variety of responses in her native Morocco, ranging from raw emotion over the loss of the Jewish community there to censorship. In 2015, she was forced by government officials to remove the reimagined Moroccan flag from an exhibition in Casablanca, she said.

As for the Jerusalem exhibit, Mechtaly said it was important for her to show that the Abraham Accords “were not forced.”

“The agreements come in the context of long-term activism and civil society efforts to engage with the Jewish community and Israel,” she said, adding that many Arab artists wanted to join the “Maktoub” exhibit but could not due to limited finances.

“I really want to make sure the Accords are not limited to political, economic and security deals, but they can also relate to the social fabric of this region,” Mechtaly continued. “Art can transform how we speak about each other and can facilitate discussion more effectively than any policy.”

Both Mizrachi-Cohen and Mechtaly say the show is a first step, designed to signal a willingness between regional artists to engage with each other on a cultural level.

“We can create a foundation for sustainable peace in the region and use this as a launching pad,” said Mechtaly. She described future plans for an artist’s residency in the UAE and taking the exhibition on the road.

Mizrachi-Cohen said the COVID-19 pandemic had severed budgets for the arts but that the show would “show whoever may be interested in supporting such initiatives how nice it can be when we put our best work forward, and when we all get together this is what we can accomplish.”