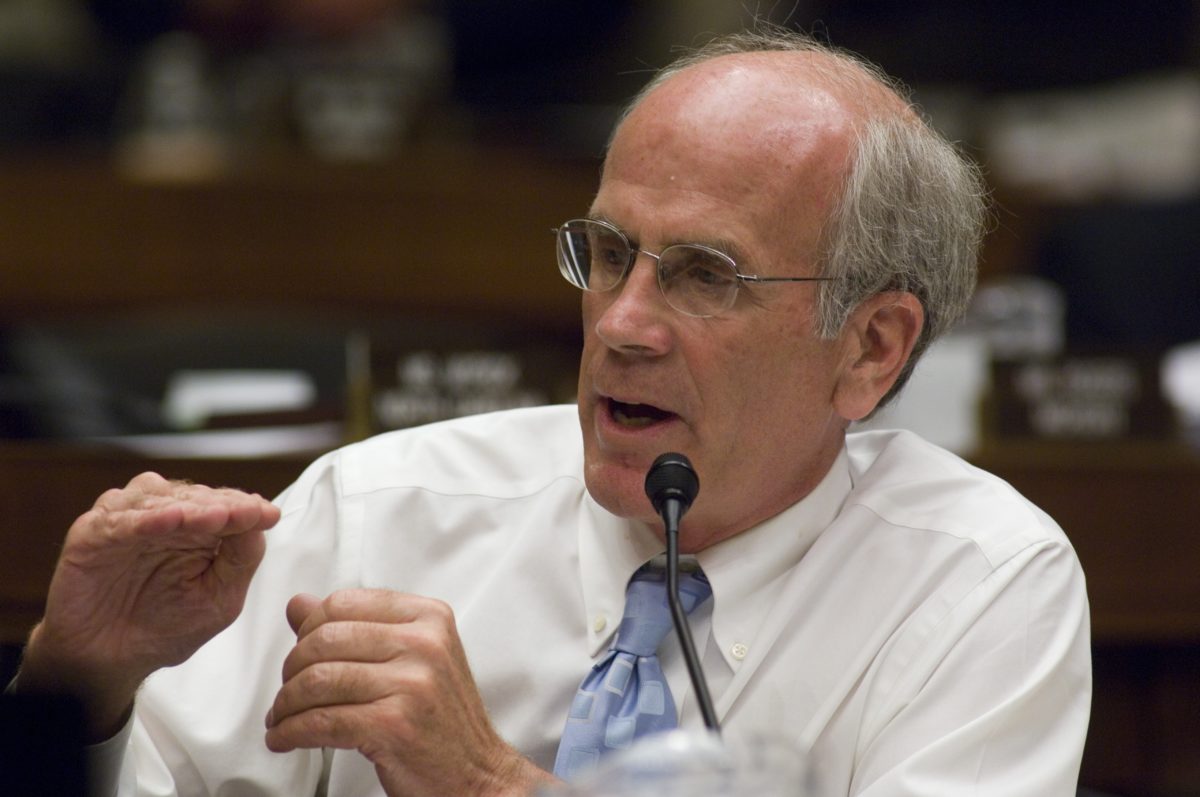 Rep. Peter Welch (D-VT) announced Monday that he would seek to replace retiring Sen. Pat Leahy (D-VT), entering the race as the odds-on favorite to win the seat and likely clearing the Democratic field well ahead of the August 2022 primary.

A member of the House of Representatives since 2007, Welch has regularly sided with the left flank of the party on both domestic and foreign policy issues — including regarding the Middle East.

The Vermont congressman, who spoke at a 2019 J Street conference, was an original cosponsor of a bill introduced by Rep. Andy Levin (D-MI) in September that would bar Israel from using U.S. aid to support Israeli settlement expansion in the West Bank. The bill would also mandate that the U.S. consider all of the West Bank, including East Jerusalem, as occupied territories and rescind the Palestine Liberation Organization’s terrorist designation.

Welch also cosponsored a bill from Rep. Betty McCollum (D-MN) seeking to add restrictions on U.S. aid to Israel. That bill accuses the Israeli military of a campaign of unlawful detention of Palestinian minors and of discriminating against Palestinians in construction planning. It further calls Israeli settlements in the West Bank “including East Jerusalem” a “flagrant violation under international law.” In 2015, Welch cosponsored a similar McCollum bill focused specifically on the Palestinian minors issue.

The congressman was one of a quarter of House members who did not sign onto a letter earlier this year that opposed conditioning U.S. aid to Israel.

In February 2020, Welch co-authored an op-ed arguing that the Trump administration’s peace plan “threaten[ed] a future where peace could prevail” and showed “disdain for diplomacy and disregard of history.”

Welch led a letter calling on former President Donald Trump to continue U.S. aid to the United Nations Relief and Works Agency for Palestinian Refugees (UNRWA) as well as direct aid to the Palestinians, both of which were cut by the administration. He also joined a letter calling for the U.S. to restore aid to Gaza and urge Israel to end its blockade.

In 2015, when former Israeli Prime Minister Benjamin Netanyahu addressed a joint session of Congress to oppose the Obama administration’s Iranian nuclear deal, Welch tweeted, “No single individual has done more to harm the vitally important U.S.-Israeli relationship than Netanyahu,” but he did ultimately attend the speech.

Welch voted in support of the Joint Comprehensive Plan of Action in 2015, cosponsored bills in 2008 and 2013 pursuing diplomatic normalization with Iran and has supported numerous measures opposing military action against Iran, although he also cosponsored four bills between 2007 and 2011 supporting increased sanctions on Iran.

Yoram Samets, a Jewish activist in Vermont, told Jewish Insider on Monday that Welch has a “very positive” relationship with the state’s Jewish community.

Rabbi Amy Small, who lives in Burlington, told JI that the community has a “close connection to Peter Welch and from my observation… he’s really a gift to us.”

“He is a strong friend of Israel and concerned for the Jewish people and for the state of Israel,” Small said.

Samets explained that Vermont’s Jewish community — like many across the nation — is “divided on Israel issues,” but consistent with the state’s progressive leanings, is weighted heavily towards the more liberal end of the party.

“I think he explores both sides fully,” Samets said, of Welch’s approach to Israel issues. “He’s very engaged, he’s very receptive, he’s easy to get to. We do very well around that with him… He’s reflective of where the Jews of Vermont are and open at the same time to the left and the right.”

“One of the reasons why Peter connects with the people in the community here… is because he is on the more progressive end of the Democratic Party, but he’s not far far left,” she said. “Here, he fits right in… The fact that he’s on the more progressive side means that some people [in the Jewish community] are not happy about that. He does have deep support for a lot of other reasons as well.”

She echoed Samets in saying that Welch is “cautious and careful” when it comes to Israel issues and “is not going to alienate people who have a strong position on the other side.

Samets told JI that Welch has been clear in conversations with the Jewish community that he opposes the Boycott, Divestment and Sanctions movement targeting Israel, which recently became a flashpoint in Burlington’s city council, and has been outspoken in recent months against antisemitism.

“Peter called me and we spoke regularly during the course of that week,” she said. “I just consider that to have been a tremendous gift… [He] made sure that I knew that if I had any concerns, I could turn to him, which I did.”

“There have been times when I reached out to him when I had concerns about antisemitism and he’s concerned about it and he welcomes that contact,” Small continued.

Matt Dickinson, a professor of political science at Vermont’s Middlebury College, told JI that Welch’s entry into the race will likely “clear the field on the Democratic side.”

“I doubt that anyone will challenge him, at least anyone with any concern about reputation within the Democratic Party,” he said. As for the Republican side: “I’m not trying to say that Republicans have no chance. The reality is, though, this will be an uphill battle for them.”

Vermont voted overwhelmingly for both President Joe Biden and Welch in 2020 (the state has one at-large congressional district), with both Democrats picking up approximately two-thirds of the vote in the state. Both the state’s current Gov. Phil Scott and former Gov. Jim Douglas — who are both popular Republicans with significant crossover appeal — have ruled out running for the Senate seat.

“The Republicans have a very weak bench here in the state, so I think that, the context of this being a predominantly blue state, all of this says that the sound money right now would be on Peter Welch,” Dickinson said.

Although Welch, at 74 years old, is comparatively old for a first-term senator, Dickinson predicted his age would not be an issue for him in this campaign.

“If he wasn’t already well-known and we didn’t already have two octogenarians [in the Senate] I think it might be a concern,” he explained. “His appearance hasn’t changed dramatically, he’s still physically active. I don’t think it’s going to be an issue. Not this term, not for this election.”

One bellwether for the race will be whether the National Republican Senatorial Committee, the campaign wing of the Senate Republican conference, will spend money in the state, according to Dickinson. “If they do, that suggests their internal polling thinks they have a shot at this,” Dickinson said.

Given that midterm elections are generally weak years for incumbent presidents’ parties and that Vermont is a “cheap state, relatively speaking” to run in, the Republicans could “take a shot at funding a candidate,” he continued.

“I think it’s far-fetched, but you can think of a scenario in which this race becomes more competitive than it looks right now,” he said.