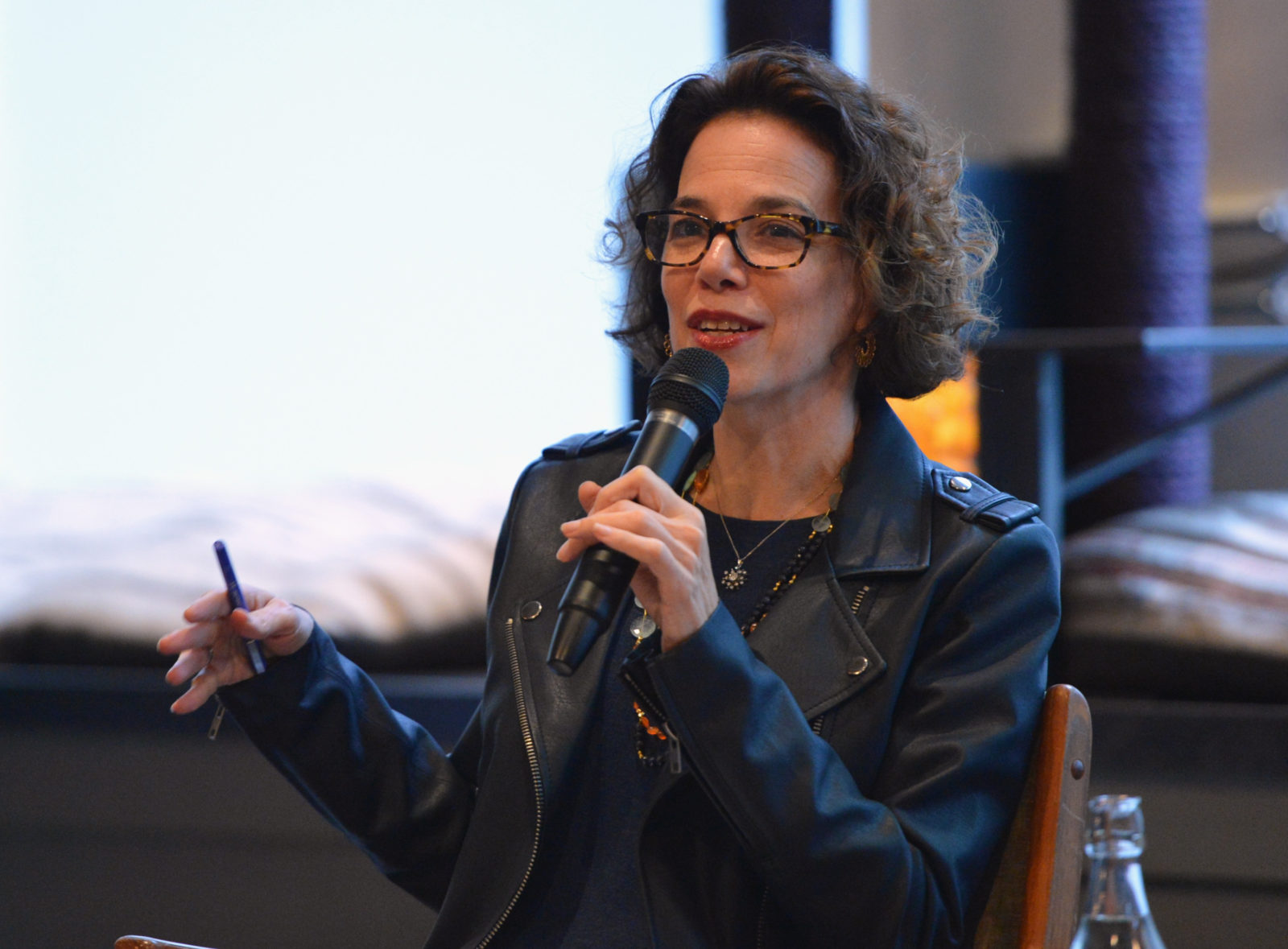 The longtime Food and Wine editor weighs in on women in the culinary space, pandemic home- cooking and her favorite Jewish foods

For most Americans, early COVID-19 lockdowns meant plenty of free time, and three meals to fill each day without the possibility of going to restaurants. Home cooking became a near-universal hobby: First there was banana bread, and then sourdough starter. Food writer and TV host Samin Nosrat convinced thousands of people to cook lasagna simultaneously through a New York Times livestream.

Former longtime Food and Wine editor Dana Cowin experienced this, too. Used to elaborate nights out at the world’s best restaurants, Cowin was not an exceptional home cook. She published a cookbook in 2014 premised on the fact that she was, actually, a terrible chef.

“We were all stuck at home, trying to figure out what to cook for dinner,” Cowin told Jewish Insider in a recent phone interview. “I for one really needed shortcuts because cooking — though obviously I’ve been in the food world for decades, I’m more interested in having other people cook and learning from them than doing everything myself.”

To bolster her cooking and to support women entrepreneurs in the food space, Cowin created Giving Broadly, a website serving as a guide to, and one-stop shop for, products from female-owned brands. It features interviews with all of the “makers” behind more than three dozen companies, including links to purchase products. The site has a wide array of offerings, including Soom tahini from Amy Zitelman, jerk seasoning from Fauzia Abdur-Rahman and Masala Mama Indian sauces from Nidhi Jalan.

“Giving Broadly, which is all packaged products to make your cooking better, was a dream for me, trying to help these women and then putting it out in the world so that other people would be exposed to their stories and the food so that they can either give them as gifts or make better food at home themselves,” Cowin explained.

Giving Broadly is the latest women-centered venture from Cowin, who has spent the five years since she left Food and Wine magazine helping promote and coach female chefs and creators. Giving Broadly was a spin-off from her podcast, “Speaking Broadly,” where she has interviewed diverse culinary figures like the American-Israeli cookbook writer Adeena Sussman and the Palestinian-American chef Reem Kassis.

“I did indeed create Giving Broadly during the pandemic, but it follows this deep interest that I have in women in hospitality, and helping people to find their path,” Cowin said.

For more than three decades, Cowin was on a relatively straightforward career path. After a handful of positions at magazines including Vogue, House and Garden and Mademoiselle, she spent 21 years as editor-in-chief of Food and Wine. She oversaw the design of glossy magazine spreads, spoke at prestigious culinary events around the world and occasionally judged cooking competitions; it was a good gig, even as advertising revenue and subscription numbers began to drop precipitously in the precarious and dwindling print media market.

She also left because she was bored. “I could not do another Thanksgiving cover. I was out of ideas,” she said. “Thanksgiving was always the greatest issue because you got to reinvent something, and it’s so exciting and new. Everyone’s gonna read that issue. And it was like, I can’t do it.”

Her first gig after leaving the magazine, as chief creative officer of Chefs Club International, an international restaurant group, did not go how she hoped.

“It was horrible,” Cowin acknowledged. “The job was like the bad boyfriend after the solid marriage — like, I’m so done with this marriage, and then you’re like, ‘Playboy!’ There wasn’t even the fun playboy part of it.”

She no longer updates Giving Broadly, but the project was emblematic of the other projects she now works on. Cowin still puts out her podcast, and she also consults for women in the hospitality industry and invests in women-owned businesses: “I hate the word coach, but it’s more like a creative innovation advisor for people who are trying to figure out what to do next,” she explained.

Cowin’s three decades in the culinary magazine niche were not marred by especially memorable or major instances of sexism directed at her. But she saw the industry recognize and honor men far more frequently than women. And with a few years of hindsight, she sees how even well-intentioned programs from Food and Wine put male chefs at an advantage.

“The sexism that I think we saw most rampant is how hard it is for women to get to those top positions,” Cowin noted — things like her former magazine’s best new chef award. “There was a feeling for a long time that the reason that women weren’t in the top positions,” Cowin explained, was “that they had chosen different ways to be in the food world. They’ve chosen to do pastry, they’ve chosen to run a business, they’ve chosen to do catering,” three areas that are less visible and less prestigious than being head chef at a gourmet restaurant.

“What emerged over time is that they made the choice, but it was also because they were completely shut out. And there was no accommodation for parenting, which is still a tremendous issue in the industry,” said Cowin.

She left the magazine industry before the racial justice reckoning last summer that was sparked by the police killing of George Floyd. Bon Appetit in particular was racked with staff discontent and turnover after a photo emerged showing then-editor Adam Rapoport dressed for Halloween in a stereotypical depiction of a Puerto Rican man. But Cowin said that, while she thought about diversity during her tenure as editor-in-chief at Food and Wine, she knows she could have worked harder at it.

“I asked all those questions, but I was too satisfied with the answers that I got,” she admitted. Since then, she has aimed to make diversity central to her work. “If you look at the podcast I’ve made, I’m only doing stories of people who are extraordinary. But I’ve worked harder at finding people across a really diverse universe.”

As a person who spent decades trying to identify trends, Cowin previously might have focused on a new French restaurant or other traditionally “gourmet” cuisines. But lately, “we’ve just moved really far away from the white tablecloth model,” Cowin said. “I am interested in trying things I haven’t tried. I am interested in exploring and exposing either cultures or foods or people who haven’t gotten very much attention, which isn’t trend-averse, but it’s prioritizing exposure and other things over what’s hot.”

Cowin has been described as “one of the country’s leading tastemakers,” and she described that process of spotting the next trend as “instinctive.”

“I’m like, ‘Oh my god, this is gonna be the next thing,’” Cowin explained of her creative process.

She can remember only one major miss in her career: vegan food.

​”I was on a panel [20 years ago] and someone said, ‘What do you think of vegan food?’ And I said what everyone at Food and Wine said — who are, like, the authorities — and they’re like, ‘The vegan food that’s not just straight, great vegetables is just awful. And I don’t see that gaining so much traction.’ And I was so wrong, obviously,” Cowin recalled.

Cowin’s discovered a love of food all on her own. “Food just wasn’t the center of anything,” said Cowin. “My mother didn’t cook. My father kept a very strict diet.” She had one cousin who sometimes cooked on holidays, when the cousin would serve “venison that had just been shot and that had, like, bullets in it.”

As a college student at Brown University, her grandma would send her a gift card to eat at a restaurant once a semester. “That was pretty special,” said Cowin.

Now, it’s sometimes a chore to get her family to care about New York’s hot restaurants. “My husband, not at all. He could not care less,” Cowin said, although “he really loves scotch and he loves wine and so he was really engaged in that part of the food scene.”

One of her college-age children “has a standing order of, ‘I have to go to Zabar’s,’ which is near us, to buy particular matzah balls, and their chicken broth, not just a standard chicken broth,” Cowin said. Other classic New York Jewish foods are family favorites — Russ & Daughters bagels, herring and cream sauce (though Cowin says that’s mostly her guilty pleasure, not her family’s), rugelach, challah that’s “squishy.”

These days, with Manhattan’s restaurant scene bustling again, home cooking is not a priority for Cowin. But sometimes, she still relies on her go-to pandemic meal, of “everything roasted.”

It’s “the dish that I’ve perfected over the pandemic in, like, 95 different versions,” Cowin said: chicken, vegetables, potatoes, “and then either some amazing incredible sauce that went on after roasting everything in the oven, or tossing with olive oil and different kinds of peppers.”