Despite Paul’s long opposition to foreign aid, ‘It hurts more now than at any other point,’ Rabbi Shlomo Litvin said 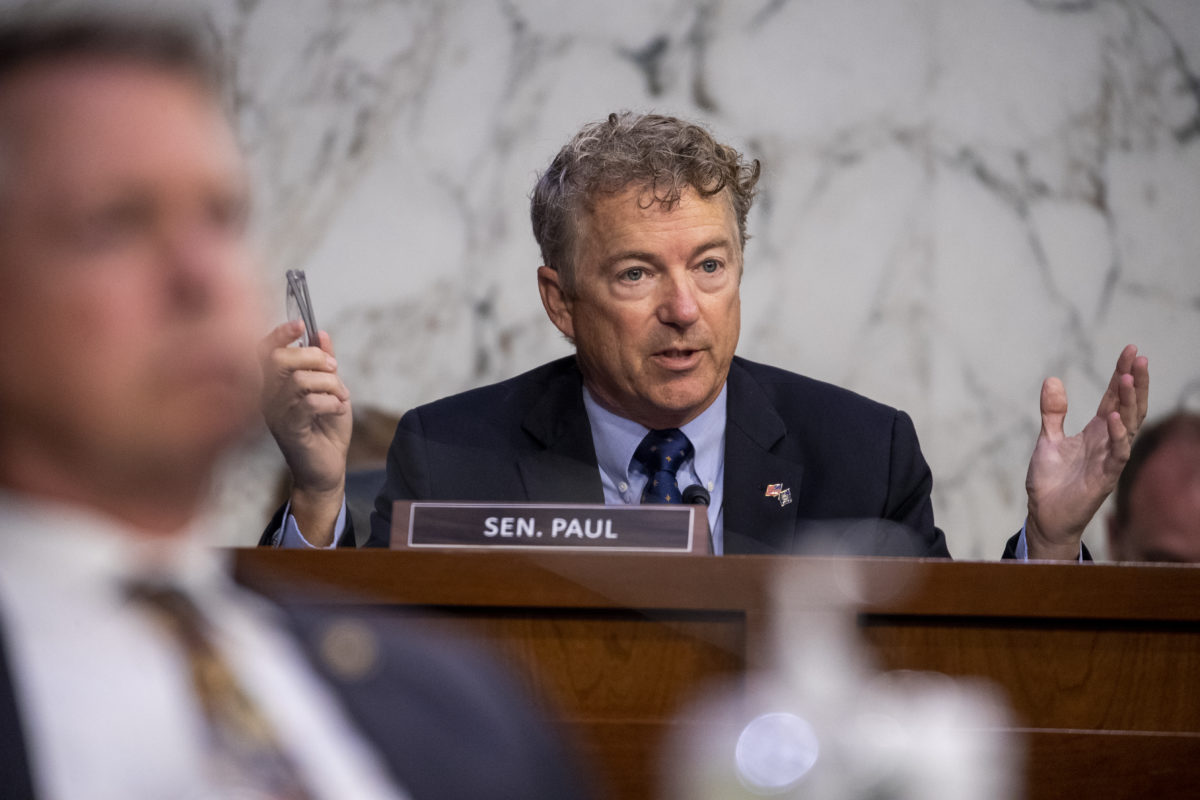 Sen. Rand Paul (R-KY) delivers remarks to Secretary of Health and Human Services Xavier Becerra as he testifies during a Senate Health, Education, Labor, and Pensions Committee hearing to discuss reopening schools during the COVID-19 pandemic on Capitol Hill on September 30, 2021 in Washington, DC.

Members of Kentucky’s Jewish community are feeling “hurt” and “thrown for a loop” by Sen. Rand Paul’s (R-KY) continued moves to block a supplemental funding package for Israel’s Iron Dome missile-defense system from passing quickly through the Senate, political leaders within the community told Jewish Insider on Monday.

Paul is the only senator preventing the $1 billion additional aid from being fast-tracked through the Senate, demanding an amendment that would fund the supplement by pulling $6 billion in aid to Afghanistan. Rep. Thomas Massie (R-KY), the only House Republican to vote against the Iron Dome aid, also hails from Kentucky.

Rabbi Shlomo Litvin, who is well-connected and active in Jewish and pro-Israel politics in the state and serves as chairman of the Kentucky Jewish Council, said he was not surprised that Paul opposes Israel aid.

But in the context of what Litvin called “blatantly antisemitic” moves by some House Democrats to strip Iron Dome aid out of a larger government funding bill last month, Paul’s opposition to the Iron Dome support “felt different” to pro-Israel activists.

“It hurts more now than at any other point,” Litvin said, recounting recent conversations with Jewish and pro-Israel advocates in the state. “While they intellectually know the senator’s point of view, it hurts more this time.”

Daniel Grossberg, a Jewish political activist with ties to several Jewish community organizations in Kentucky, said that some Jewish activists were “thrown for a loop because [Paul] has repeatedly said that, even though he doesn’t support foreign funding, that he would make [an] exception for Israel.”

“The Jewish community is generally frustrated when people express that they’re going to support and then vote against [Israel aid],” Grossberg, who ran for the Kentucky state House last year as a Democrat, continued. “If they’re going to vote against you, we want to know upfront so that we’re not relying on that support, we’re not expecting it to come.”

Paul spokesperson Kelsey Cooper responded to the criticisms. “Democrats are the ones who blocked Dr. Paul’s proposal to fully fund Iron Dome using money that would have otherwise gone to the Taliban,” she said. “All Republican senators approved Dr. Paul’s proposal.” Paul is the only senator blocking the original Iron Dome funding bill passed by the House.

“Any Israel advocate in Kentucky knows Dr. Paul has stood with Israel on a variety of issues and the Jewish community on a variety of issues. It bothers a lot of Jewish Kentuckians when we see comparisons made between him and people who say that Israel is ‘hypnotizing the world’ and all that other garbage,” he said, referring to an old tweet by Omar that has been widely criticized as antisemitic. “It certainly hurts to see Kentucky’s name associated with an antisemitic attack on the Jewish state and the Jewish people.”

Litvin also told JI that he spoke to members of Paul’s staff last week to discuss concerns about Paul’s activities, and they responded that Paul’s efforts to block aid from going to the Taliban would ultimately benefit Israel.

In the long term, Litvin believes that this dustup over Iron Dome will not impact Paul’s relationship with the Jewish or pro-Israel community because Paul has, in general, been “incredibly consistent” in his support for Israel and Jews in Kentucky.

Grossberg, who is a strong supporter of Charles Booker, a 2020 Democratic Senate candidate planning to challenge Paul in 2022, credited Paul for his willingness to continue to foster a relationship with the pro-Israel community amid policy disagreements.

“He’s always willing to continue the dialogue,” Grossberg said. “Does this affect the relationship? Yes. Does it…give us pause on a number of issues? Absolutely. But with him, I don’t have the concern that this is ending the dialogue with him or his office.”

D. Stephen Voss, a political science professor at the University of Kentucky, noted that Democrats might struggle to challenge Paul on this particular issue in the 2022 election, given that Booker’s progressive constituency tends to be less supportive of Israel than more centrist Democrats.

“If [Paul] faces a more moderate or centrist Democrat…that sort of mainstream or moderate Democrat could very much try to make foreign policy one of the prongs of an attack on Rand Paul,” he said.

While Booker frustrated some in the Jewish community earlier this year with tweets critical of Israel, Grossberg praised him for meeting with Jewish leaders to discuss the issue and said that meeting improved his relationship with the community

Grossberg speculated that the Iron Dome controversy could open up a window for Booker — whose mother is a pastor — to pick up support from Kentucky’s small Jewish community, as well as its larger evangelical community, which also holds a strong affinity toward Israel.

“[Booker] is not in the strongest place, but he still has an opportunity,” Grossberg said. “Rand Paul might be making a fatal miscalculation by abandoning the evangelical base by not fully supporting Israel.”

Booker did not immediately respond to requests for comment on his position on Iron Dome.

Litvin and Grossberg took a much darker view of Massie’s vote against the Iron Dome aid than of Paul’s objection to it.

“When I saw there was one Republican vote against defending Jewish children, it was unquestionable who that vote was,” Litvin said.

“What I’m hearing [in the Jewish community] is that the guy has said and done a number of antisemitic things in his career, and it’s not just a singular incident,” Grossberg said.

Grossberg cited Massie’s tweet characterizing AIPAC — which criticized Massie for his vote against Iron Dome funding — as “foreign interference in our elections.”

Both Livtin and Grossberg said that it’s been difficult for pro-Israel activists to establish a relationship with Massie.

“He’s refused to meet with us,” Litvin said. “So I don’t think it’s comparable [with Paul’s actions].”

Massie did not respond to a request for comment.

Litvin speculated that Massie’s vote on Iron Dome could re-invigorate pro-Israel forces in an attempt to oust him in 2022. Pro-Israel groups initially supported Massie’s primary challenger in 2020 but pulled their support after his history of incendiary tweets surfaced. Massie ultimately defeated the challenger by more than 60 percentage points.

Grossberg disagreed, arguing that one of Massie’s current Republican primary challengers “makes him look sane, rational middle of the road.”

The University of Kentucky’s Voss also noted that the Iron Dome issue has little salience with many Kentucky voters; he told JI that he has seen no coverage of Paul’s or Massie’s activities on the issue in any local media.

Grossberg and Litvin are also split on the extent of antisemitic and anti-Israel sentiment within Kentucky politics.

Grossberg said he doesn’t believe it’s a coincidence that the only two Republicans in Congress who opposed Iron Dome funding hailed from the Bluegrass State. “I would say that it’s something in Kentucky politics, not Kentucky Republican politics… it is not easy being a Jew in politics in Kentucky — Democrat or Republican,” he said.

Litvin indicated he views the issues as more isolated, but particularly prevalent within the state Libertarian Party.

“I think in the broader picture, you also see the differences between the two,” Litvin said. “It’s also worth noting that some of the most pro-Israel voices in Congress are coming from Kentucky… Kentucky was the 25th state to have an anti-[Boycott, Divestment and Sanctions law], the first state to have recognized the [International Holocaust Remembrance Alliance working] definition of antisemitism.”