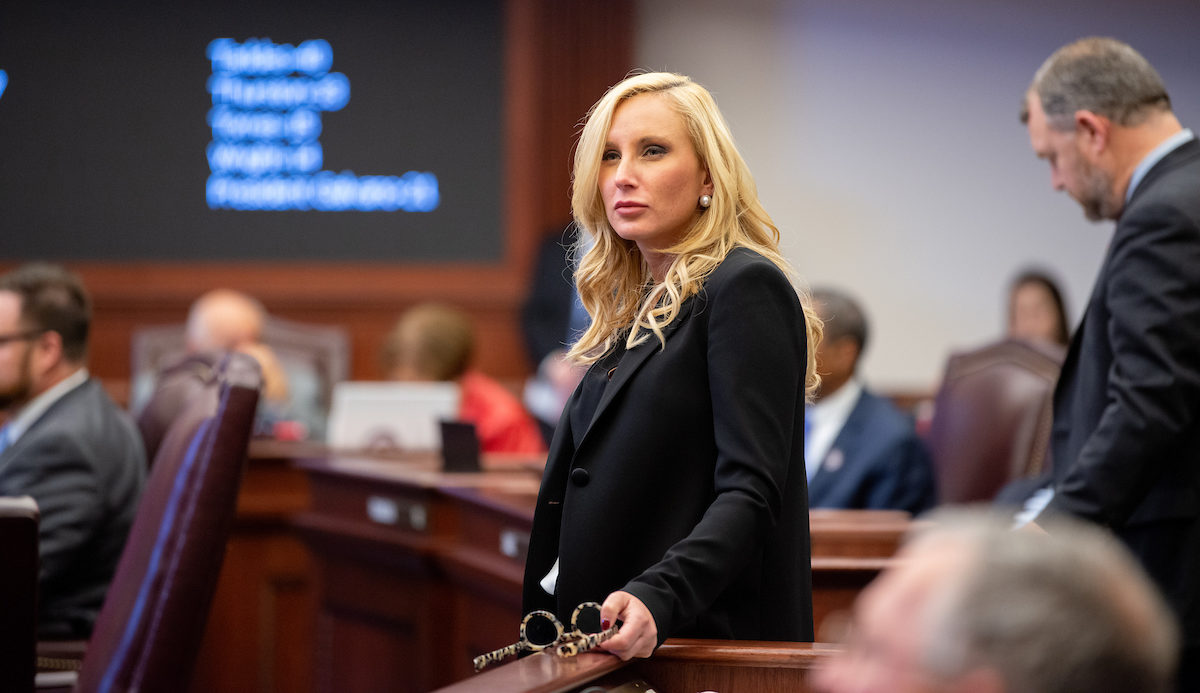 When Lauren Book launched her bid for Florida Senate in the summer of 2015, she was embarking on a somewhat predetermined path, given her pedigree. Her father, Ron Book, is one of the state’s most powerful lobbyists — as much a presence in South Florida, where he resides, as he is in the state capital of Tallahassee. And she has often leaned on him as a source of institutional knowledge during her time in the state legislature.

“He’s such a valuable resource for me to sort of walk through and talk through all the traps,” Book told Jewish Insider in a recent interview. “He’s been around so long, he knows a lot of those traps.”

But it is one thing to wield power in the shadows, as her father has done, and quite another to shape state policy in public view. During her first five years in office, Book, a Democrat who represents Broward County, has proved adept at the task, building a track record as an effective and empathetic lawmaker who is widely regarded as a bipartisan workhorse on such varied issues as child advocacy, Holocaust education and gun safety. “She’s a true consensus builder,” said Shevrin Jones, a Democratic state senator in South Florida who has known Book for years.

With the 2022 election on the horizon, Book may be banking on that reputation as speculation swirls over whether she will pursue statewide office. Though Book, 36, hasn’t yet publicly stated her interest in running for a seat in the Florida Cabinet, which includes three members who serve in the state government’s executive branch, she is currently weighing her options, according to a recent Politico article, “with a likely landing spot being a race against Republican Chief Financial Officer Jimmy Patronis.”

In conversation with JI, Book emphasized that she is now preoccupied with the more immediate challenge of curbing the pandemic as well as running for reelection to another term in the Senate. But she didn’t rule out the prospect. “Any opportunity that I have to be a voice for those in my community, I will do it,” Book said. “I’m focused on what that means for here and now, but going forward, obviously, my duty is to serve, and so I will do that in any capacity that I possibly can.”

Statewide office bids remain daunting for Democrats hoping to break out of South Florida’s blue bubble. Nikki Fried, Florida’s agricultural commissioner and the lone statewide elected Democrat, defied the odds when she prevailed by a razor-thin margin over her Republican opponent in 2018. Fried, the first Jewish woman ever elected to statewide office in Florida, is something of an outlier, but she also charted a course for future statewide Democratic candidates. “You can’t not have respect for her,” said Book, who is also Jewish, “the things that she has done and the trail that she has blazed.”

The admiration goes both ways. “Senator Book has consistently been a strong advocate for Floridians with different abilities, women’s rights, protecting people from sexual abuse and many other crucial issues,” Fried told JI via email, adding that Book has “always fought hard for good public policy.”

Steven Schale, a Democratic strategist in Florida, agreed with that view. “Lauren is immensely talented,” he said, adding, “Because of the advocacy work she did prior to getting elected, she has come to Tallahassee hitting the ground running.” Running for statewide office, Schale cautioned, “is a tall order,” but he was confident Book would “be able to put together the resources to win” should she pursue a cabinet post.

“This combined with her work in Tallahassee, and her compelling life story,” Schale added, “makes her a very strong potential candidate.”

Her story is a moving one — all the more so because of the struggles she overcame on her way to elected office. Book is a survivor of childhood sexual abuse perpetrated for six years by her live-in nanny, an experience that, “for a long time, defined who and what I was,” she told JI.

Now, she said, “the most important thing is that I utilize my voice as somebody who lost their voice for such a long time. Being a survivor, being a child in that situation and having your voice taken from you and your power taken from you — I have committed to myself, and to everyone around me, that I will never let that happen again. It’s my responsibility to be that voice for others that don’t have it.”

In 2007, Book founded a nonprofit organization, Lauren’s Kids, with the goal of raising awareness around child sexual abuse. Since joining the Senate, she has used her bully pulpit to advance legislation around child welfare and hazing, among other things, ascending to chair the Committee on Children, Families and Elder Affairs — a rare position for a Democrat in the Republican-controlled state Senate and one that gives her outsized influence.

“She’s a victim’s advocate, and that’s probably where she’s done her greatest work, quite frankly, being a victim herself and knowing what that’s like,” said Jared Moskowitz, Florida’s director of emergency management who is close with Book, “creating a more comfortable environment for people to tell their stories.”

As the new legislative session begins, Book has a number of goals in mind, such as closing a loophole that allows sex offenders to avoid registries. Book is also optimistic that she will finally pass a bill she has been working on for five years to ban restraint and seclusion in schools. “It would surprise people, I think, to realize that today in our state we have these things that are called seclusion rooms,” Book explained. “Children with exceptionalities in our public schools, they can be secluded and restrained at any point in time during the school day, and up until a few years ago, teachers didn’t have to report that to parents. But it’s still happening.”

“I’m hopeful that this year is going to be the year that we’re able to get that one past the finish line,” she said.

Much of Book’s legislation is informed by her personal background. Last session, she successfully passed a Holocaust education bill that mandates additional instruction around antisemitism. “I grew up learning about the Holocaust, so the thought of people thinking that it didn’t really happen is abhorrent to me,” she said, alluding to a public school principal in Palm Beach County who made headlines in 2019 for denying the Holocaust.

As the bill went through committee, Book invited an Auschwitz survivor, Magdalen Bader, to testify on its behalf. “You could hear a pin drop, and just watching people watching her share her story,” Book said, “was probably one of the most special things.”

Book was moved to pass the bill upon returning from a trade mission to Israel during which she visited the Yad Vashem Holocaust museum. It wasn’t her first time in the Jewish State — she was, in fact, bat mitzvahed there. But visiting as a public official, Book used the trip as an opportunity to educate herself, arriving only a year after the shooting at Marjory Stoneman Douglas High School in Parkland, Fla., which sits in Broward County.

“I really wanted to look at how they were doing school safety in Israel,” Book recalled. “There’s nobody that knows safety better than Israel. I mean, there’s just not. They know it, they’ve figured it out — and so I went to several schools in Israel and looked at security.” Her conclusion was that schools in Florida could learn a good deal from Israel’s security protocols. Though she was unable to incorporate what she gleaned from the trade mission into legislation, she maintains that the effort is still a priority. “We’re definitely still looking at some of those ideas.”

After the trade mission, Book, who is raising twin toddlers with her second husband, Blair Byrnes, said she became more attuned to Judaism, bringing her children to Israel, for instance, and conducting their naming ceremonies at the Western Wall. “It’s a piece of your life, your world, and how you connect to your family,” she said of her faith. “I have no living grandparents, so I feel like it’s an opportunity to connect with all of those parts. We have a rich culture, and so I want to be able to impart that to our children.”

Though Book said she never experienced antisemitism growing up in South Florida, she worries her kids won’t be as lucky. “I’m very, very cognizant of the fact that I am raising two Jewish children who will probably experience a little bit of a different world than I did when I was growing up,” she said, mentioning the man who wore a “Camp Auschwitz” shirt during the Capitol breach. “Those things are very real.”

Still, Florida as a whole is more welcoming than ever to statewide Jewish candidates, according to Ron Klein, a former Florida congressman who chairs the Jewish Democratic Council of America. When Klein moved to Florida 30 years ago, he said, “to be Jewish and statewide, it was almost viewed as ‘don’t think about it,’ because North Florida is just very conservative, very southern. There was a lot of antisemitism.” Things are different now, however, he said. “I would say today that’s not an issue anymore.”

Nikki Fried’s 2018 victory demonstrated as much — though whether Book will follow a similar course remains to be seen. For the moment, Book says, she is “knee-deep and head-first” in helping her constituents get through the coronavirus crisis as cases have surged across Florida.

Mitch Ceasar, a former longtime chair of the Broward Democratic Party, said Book’s areas of focus will serve her well if she pursues higher office. “Her scope is not overly broad, and when you specialize, I think you become much more effective, as she has, in family issues, children’s issues, things like that,” he told JI. “Those kinds of issues cut across political boundaries.”

“She has a political story, she has a personal story,” Ceasar said. “Her personal pain has translated into a universal language to people regardless of their political affiliations.”