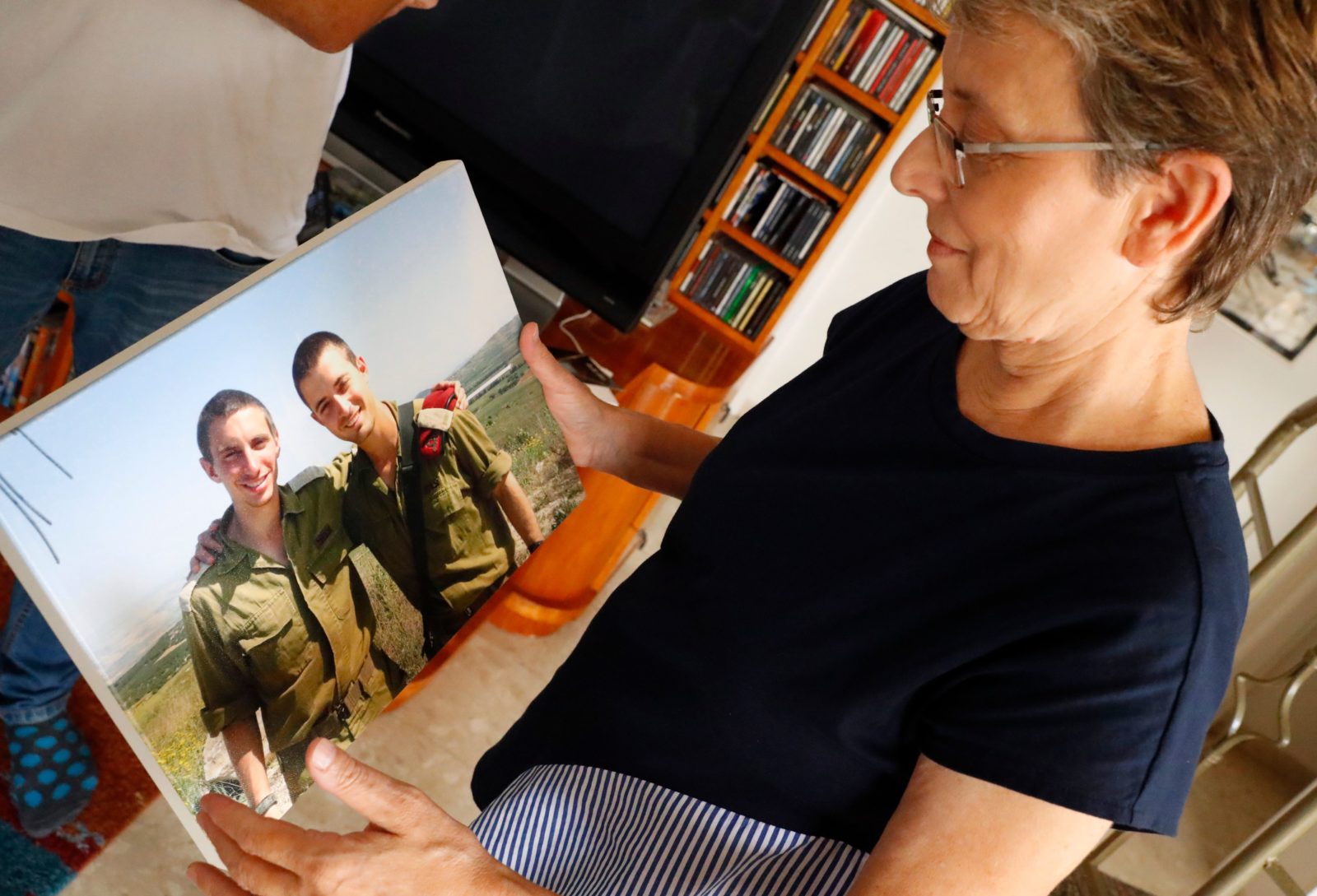 Goldin believes negotiations on rebuilding Gaza provide an opportunity to pressure Hamas into releasing the remains of her son, who was killed by the group in 2014

The last time Leah Goldin spoke to her son Hadar, a soldier in the elite Givati Brigade fighting along the border between Israel and Gaza during Operation Protective Edge in 2014, she was planning to visit him during his unit’s downtime. Hadar waved her off of the idea, sure that rumors of an impending cease-fire meant that he would be home soon.

Hadar Goldin did not come home for Shabbat. Hours after the declaration of a 72-hour U.S.-brokered cease-fire between Israel and Hamas following several weeks of rocketfire and a ground invasion of Gaza by IDF troops, Hadar’s unit was ambushed in a tunnel that ran from Gaza. He was taken by Hamas, while two fellow soldiers in the unit were killed. Israeli authorities soon concluded that Hadar did not survive the attack. The conflict would continue for several more weeks until a more permanent cease-fire was brokered in late August.

For seven years, Hamas has held onto Hadar’s remains. And for seven years, Leah Goldin has fought to get them back. Her journey has taken her to the U.S. countless times, as she has sought to pressure successive administrations to work to retrieve her son’s body.

Goldin traveled to New York and Washington this week for more meetings, including with U.S. Ambassador to the U.N. Linda Thomas-Greenfield and U.N. Secretary-General Antonio Guterres, with whom she met alongside outgoing Israeli President Reuven Rivlin.

As world and regional powers begin discussions on rebuilding Gaza following last month’s 11-day conflict between Israel and Hamas, Goldin argues that the U.S. should condition any aid on the return of the bodies of Hadar and Oron Shaul, another soldier who went missing after an attack by Hamas and is presumed dead, as well as two Israeli civilians who went into Gaza in the months after that summer’s conflict and have not been seen or heard from since.

“We are now in a very narrow window of opportunity,” Goldin explained. “Because we are now [a month] after the last war, and it’s the same — the Americans are leading a cease-fire, along with the Egyptians that are the mediators, and the Qataris that are the money providers. And America decided to invest money in Gaza. So I keep saying the stars are aligned. The same players are doing the same… So now is the time and the opportunity to put the return of my son Hadar as a confidence-building measure to any agreement they do.”

Because a cease-fire had already been called at the time of the ambush on Hadar Goldin’s unit, the soldiers lacked the equipment necessary to defend against a surprise attack.

His mother alleges that Hamas knew that the unit was vulnerable and strategically planned the attack. “Hamas violated the cease-fire, knowing the IDF protocol is not to shoot,” she said.

Several years after her son’s death, Goldin found an ally in then-U.S. Ambassador to the U.N. Nikki Haley. Goldin connected with Haley, whose husband was an officer in the South Carolina Army National Guard, on a personal level. Haley, Goldin explained, “got the ball rolling.”

“My heart goes out to the Goldin family who have persevered through such hardship. The withholding of remains is one of many barbaric practices of the Hamas terrorists. We must always keep that in mind when dealing with them,” Haley told JI.

Also speaking at the 2017 meeting was Irwin Cotler, the former Canadian justice minister and founder and chair of the Raoul Wallenberg Centre for Human Rights. Cotler laid out a number of violations of human rights and international humanitarian law that Hamas was committing in refusing to repatriate Hadar Goldin’s remains. Among the violations were Hamas’ refusal to provide information about the soldiers’ situation and status and refusal to allow their families to provide a proper burial.

“Hadar Goldin, in particular, was abducted and murdered in the course of a U.N.-mandated, E.U.-supported, U.S.-brokered humanitarian cease-fire,” Cotler told JI. “So the very abduction and murder was itself a standing violation, and a violation of U.N. principles regarding protective international peace and security.”

In 2019, the U.N. Security Council adopted a resolution specifically addressing individuals who go missing during armed conflict. UNSCR 2724 sets forth a number of requirements of parties to armed conflicts, including that they should “enable the return of their remains, and to account for persons reported missing without adverse distinction and to put in place appropriate channels enabling response and communication with families on the search process.”

UNSCR also calls on parties “to respect the remains of the dead… to return them, whenever possible, to their relatives, consistent with applicable obligations under international humanitarian law and human rights law.” The resolution also requires the U.N. secretary-general “to brief the Security Council every twelve months on the implementation of the resolution, within the annual briefing on the protection of civilians.”

To date, such a briefing has not occurred, and Hamas has given no indication that it is willing to return the remains of the soldiers or civilians who have been presumed dead for nearly seven years.

In addition to those requirements, the language states that “the steps set out in this resolution can contribute to the process of confidence building between parties to armed conflict, expediting peace negotiations and settlement, transitional justice processes, reconciliation, peacebuilding and sustaining peace.”

That clause, Goldin argues, gives the U.S. an opening to use the return of her son’s remains as a tool in handling talks with the Palestinians.

“This is our norm of doing business in the Western world,” she said. “When you’re doing [an] agreement, you ask for confidence-building measures. It’s normal.”

In her meetings she talks about Hadar, the art enthusiast who worked to see the good in all people and to take care of others. “I’m just a mother,” Goldin told JI. “I’m not a diplomat, I’m not a lawyer.”

Cotler is hopeful that Goldin will be successful amid a change in both Israeli and U.S. administrations. “There’s enormous pain and suffering, [there’s] human faces behind all this,” he said. “So we can talk about resolutions… The Goldin family suffers every day. And it is true, also, for Oron Shaul’s family, and it’s true for the civilians’. So we’re talking about human tragedies here. Families should have a right to be able to bury their sons in dignity, according to Jewish law.”