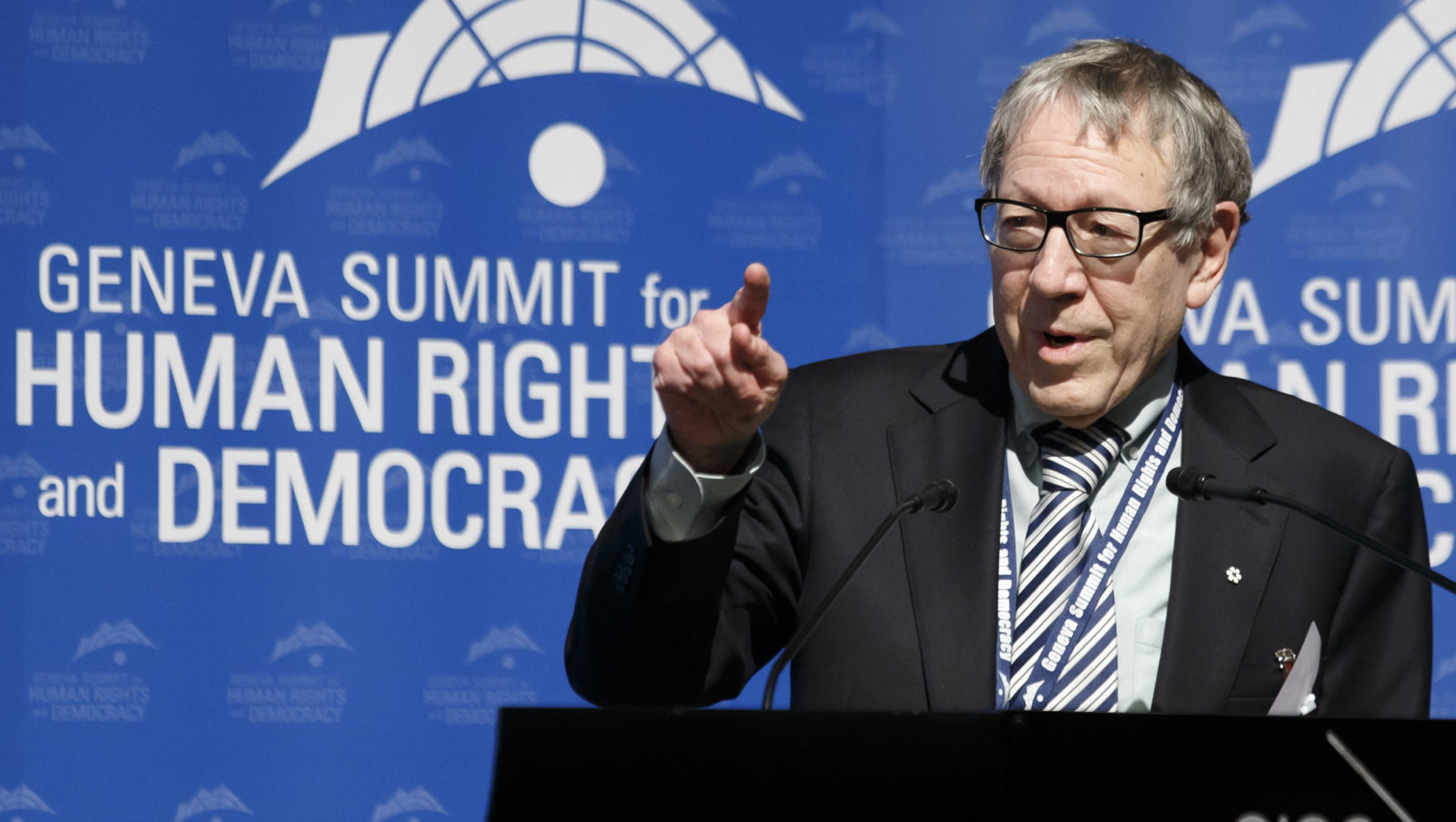 At 80 years old, human rights lawyer Irwin Cotler is busier than ever

Serving as Canada’s new antisemitism envoy is a pro bono gig for the former MP, who also defends dissidents via Zoom

Irwin Cotler’s days start early and end late. He now spends most of his time working from home, but still oversees or contributes to the legal defense of dissidents around the world.

“It’s hard to sleep when you’re defending political prisoners who may be in a COVID-infested prison,” Cotler told Jewish Insider in a Zoom interview last week. “It keeps you up at night.”

At 80 years old, the international human rights lawyer — who formerly served as Canada’s minister of justice and attorney general, a member of Parliament representing Montreal and a law professor at McGill University — remains as busy as ever. Before he spoke to JI, he had been on a call with Canadian Prime Minister Justin Trudeau.

Cotler is the chair of the Raoul Wallenberg Centre for Human Rights, which he founded in 2015, and in November, was appointed by Trudeau to serve as the country’s first special envoy on preserving Holocaust remembrance and combating antisemitism. “I sleep very little,” Cotler admitted.

Cotler remains actively involved in human rights cases around the world, the most recent being that of Raif Badawi, a Saudi writer who was arrested in 2012 for the crime of “insulting Islam.” After his arrest, Badawi’s wife and children fled to Canada, where they met Cotler. His wife “asked if I would serve as international legal counsel to her husband. That was just before he ended up getting 50 lashes,” Cotler said. Badawi has continued to speak out, and recently has advocated for Saudi normalization with Israel.

In Cotler’s view, the comments that got Badawi arrested several years ago reflect a sensibility that is now commonplace in Saudi Arabia. Badawi was arrested “for saying then what [Saudi Crown Prince Mohammed bin Salman] has been saying himself the last three years, calling for a more open Saudi Arabia, a more moderate Islam,” said Cotler. But Badawi remains imprisoned, and bin Salman has continued to take action against dissidents, including Saudi-American journalist Jamal Khashoggi.

Khashoggi’s 2018 killing occurred a mere two months after a diplomatic feud erupted between Saudi Arabia and Canada following calls from Canada’s foreign minister for Riyadh to release Badawi, leading Saudi Arabia to cut off diplomatic ties between the nations and recall more than 15,000 Saudi students studying in Canada. While Saudi Arabia was supported by several Arab states, Western democracies did not come to Canada’s defense. “The silence of the democracies, in fact, enabled [bin Salman] to believe that he could act with impunity,” Cotler argued. “I always thought there was a straight line between the two,” he said, referring to the diplomatic rift and Khashoggi’s murder.

One of Cotler’s personal goals is to see more global leaders take a human rights approach to foreign policy. He suggested that Israeli Prime Minister Benjamin Netanyahu might use a future meeting with bin Salman to raise the issue of Badawi’s imprisonment. “Israel’s got interests, but there’s also values involved,” Cotler said. If Netanyahu were to raise these points, “I think that it would serve everybody all around: It would be good for the cause of justice. It would be good for the relations between Saudi Arabia and the U.S. And it will be good to see Israel taking up the case of a political prisoner who, I might add, has been supportive of the Abraham Accords.”

Cotler has similar hopes for President Joe Biden, and already feels relieved by the administration’s early stance on human rights issues. In the previous administration, “Trump would treat adversaries as allies, and treat allies, like Trudeau of Canada, sometimes as adversaries,” Cotler noted. “We have now a president and an administration that has made the promotion and protection of human rights and democratic priorities both domestic and foreign policy.”

Still, Biden has been criticized for his recent response to a U.S. intelligence report connecting bin Salman to Khashoggi’s murder. Biden opted not to sanction bin Salman, despite the report’s finding that the crown prince personally approved the killing of Khashoggi. As an explanation, White House press secretary Jen Psaki said earlier this month that America’s “objective” with Saudi Arabia is “to recalibrate the relationship, prevent this from ever happening again and find ways… to work together with Saudi leadership.”

When asked about Biden’s response to the report, Cotler said that as a former lawmaker, he empathized with the government’s need to “calibrate values and interests,” and the difficulties that arise when balancing a nation’s strategic goals with its political principles. “I happen to, at this point, believe that the Biden administration is moving in the right direction,” Cotler said.

Unlike most other activists, Cotler might be lucky enough to have a direct line to the person handling U.S. foreign policy. He had a decades-long friendship with U.S. Secretary of State Tony Blinken’s stepfather, Samuel Pisar, a Holocaust survivor. “When I was a law professor at McGill, we inaugurated the Raoul Wallenberg Lectureship in Human Rights,” Cotler recalled. The first person to give that lecture was Elie Wiesel; the second was Pisar, sparking a friendship in which Cotler visited him at his homes in New York and in France. 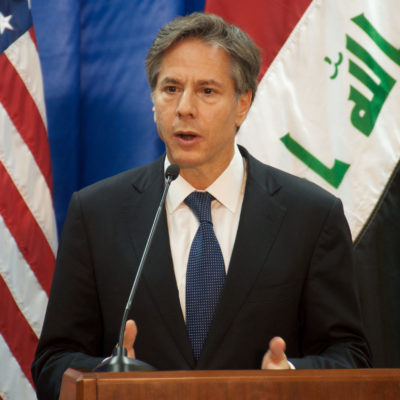 But human rights work is only half of Cotler’s portfolio — he also has another full-time job, as Canada’s antisemitism envoy. He took the job pro bono, he said, with practically no budget, to handle a huge portfolio that includes both domestic and global antisemitism, domestic and global Holocaust remembrance, and chairing Canada’s delegation to the International Holocaust Remembrance Alliance. (Canada has adopted the IHRA working definition of antisemitism, which Trudeau says is part of the nation’s “anti-racism strategy.”)

Cotler sees a straightforward connection between his two passions: the Jewish community and international human rights. “I take a human rights approach to combating antisemitism,” he explained. “While [bigotry] begins with Jews, it doesn’t end with Jews. So for me, all these things converge, and there’s a universal resonance, both of the lessons of the Holocaust and the combating antisemitism today.”

Some on the political left might call this framework intersectionality. But Cotler is not trying to apply a political ideology to his fight against antisemitism, and he says he feels fortunate that Canadians by and large do not politicize the issue. “People are not weaponizing antisemitism. You don’t have the right weaponize it against the left, and the left weaponizing it against the right,” he noted — unlike Canada’s neighbor to the south. “The big difference is Canada is not as polarized or as divided as the U.S.,” and “there still is a consensus.” His biggest concern is what he calls the “normalization” of antisemitism, where “it gets mainstream, and it doesn’t elicit the condemnation, or maybe the outrage, that it deserves.”

One of Cotler’s goals as Canada’s global antisemitism envoy is to address what he views as antisemitism at the United Nations, in the double standard he says the U.N. applies to Israel. “The rights of Israel deserve equal respect, not that human rights standards should not be applied to Israel. They must be. But these standards must be applied equally to everyone else,” Cotler said. He pointed out that Syria was recently appointed to a top position on the U.N.’s Special Committee on Decolonization, despite its well-documented history of brutal repression during the country’s civil war.

Cotler noted that some in the pro-Israel community who criticize the U.N.’s treatment of Israel simply oppose the institution entirely, but he is not among them. “If you’re Canadian, the United Nations is part of your DNA,” Cotler explained, noting that “human rights is a centerpiece of our foreign policy, [and] international law is part of my identity.”

His work truly is international: The cases currently in his docket include Badawi in Saudi Arabia, along with dissidents from China and Russia. During his conversation with JI, he received a call about a matter related to political persecution in Venezuela. “That’s another priority,” he said. For Cotler, every matter related to global injustice is a priority: “I get energized by the work.”