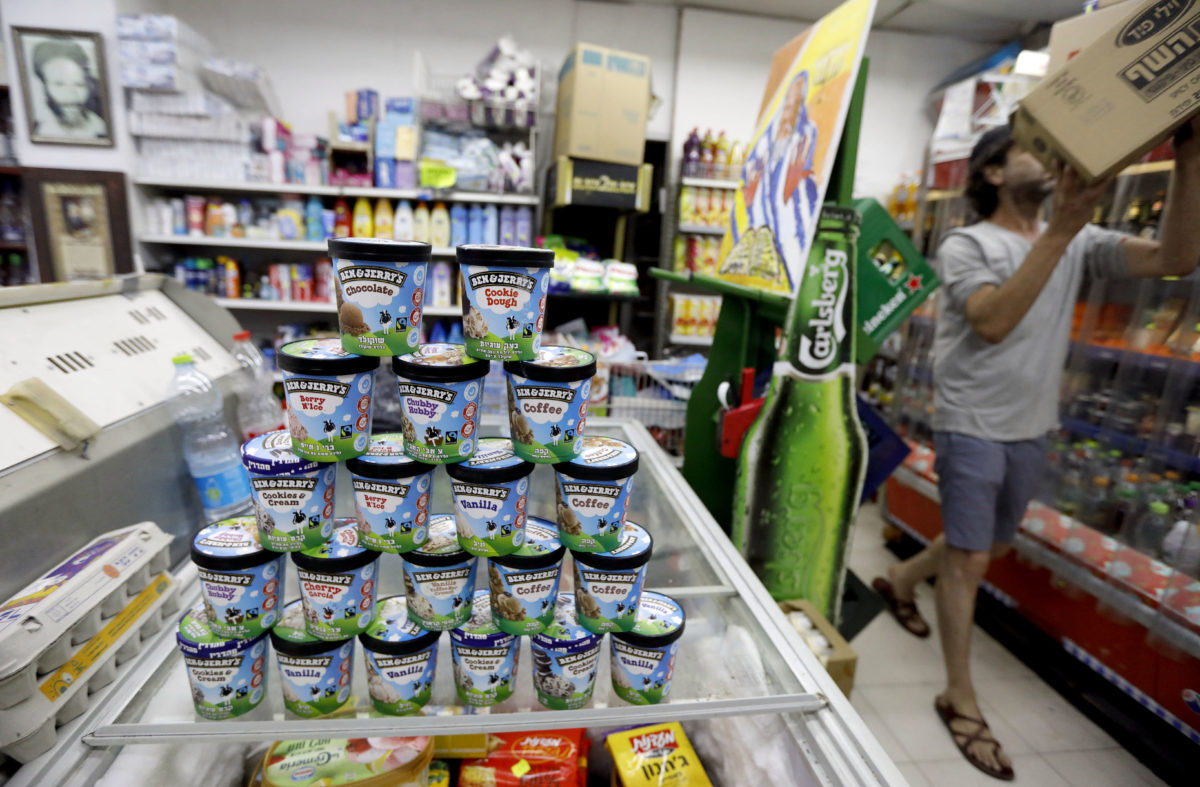 Following Ben & Jerry’s announcement on Monday that the ice cream company will cease sales of its products in what it called the “Occupied Palestinian Territories,” states that have enacted legislation opposing the Boycott, Divestment and Sanctions (BDS) movement against Israel are being urged by Jewish community leaders and Israeli officials to enforce the laws, some for the first time.

Thirty-three states have adopted anti-BDS legislation that ranges from prohibiting a state government from signing contracts with entities that support BDS to barring investments in pension funds with companies that boycott Israel. Some states, including New York, Texas, Florida, Nevada and North Carolina, restrict both.

While most states are unlikely to have contracts with Ben & Jerry’s, some do with Unilever, which acquired the Vermont-based ice cream company in 2000. An NBC News report revealed that Unilever had pushed out the Monday statement about the halting of sales without sign-off from Ben & Jerry’s board, members of which opposed including a sentence that the company would continue to sell its product in Israel.

“Any chance that Unilever had to walk away from this and put it on Ben & Jerry’s and say, ‘Oh, well, Ben and Jerry’s, their board makes these social impact decisions,’ they kind of shot themselves in the foot,” said one person familiar with statewide efforts to push anti-BDS legislation. “It’s now very clear that Unilever has the ultimate say.”

That could force the U.K.-based conglomerate into a sticky legal situation in the U.S. Unilever’s subsidiaries sell a range of products including food, cleaning products and personal care items.

“I’m sure there’s lots of soap, dishwashing detergent and Lipton iced tea and other products in the Unilever umbrella, that are purchased by state prisons, state hospitals, state universities and other state entities that would very much be called into question as the boycott takes hold,” William Daroff, CEO of the Conference of Presidents of Major American Jewish Organizations, told JI.

While many states do not publicly list the companies associated with their pension funds, an individual with knowledge of the state-by-state legislation confirmed that Texas includes Unilever in its pension portfolio.

The phrasing used in the announcement — “Occupied Palestinian Territories” — raised questions among some who questioned exactly where the ice cream products would no longer be sold.

“I think it speaks to the fact that Unilever hadn’t done their homework and wasn’t totally prepared,” Daroff said. “Otherwise, why would they use a term of art that has no real meaning?”

The last time a global entity received widespread attention for issuing a separate set of guidelines for the West Bank was in 2018, when Airbnb announced the decision to ban listings in Israeli settlements — a move that was reversed months later.

“Much as I don’t believe Airbnb had a long view before they made their announcement, my sense is that Unilever also did not have that sort of long view of the consequences that could befall them as a multinational corporation,” Daroff told JI.

The response in Washington has been largely muted. Rep. Cori Bush (D-MO) tweeted in support of Ben & Jerry’s, and Rep. Alexandria Ocasio-Cortez (D-NY) boosted Bush’s tweet. Rep. Lee Zeldin (R-NY), who recently announced his candidacy for governor, called on Albany to “follow the 2016 Executive Order that prohibits state agencies from conducting business with institutions or companies that promote BDS.”

Rep. Debbie Wasserman Schultz (D-FL) told JI on Tuesday afternoon that she considered tweeting about the issue, but ultimately held off because “at the end of the day, it’s ice cream.”

“If [Ben & Jerry’s is] going to have a boycott over [oppressive] policy, they have a lot more countries to go,” Wasserman Schultz said. “The fact that they seem to have started with Israel, and the West Bank and Gaza, just shows you that it’s not a well thought-out policy. It’s irresponsible. And it’s not grounded in morality.”

Wasserman Schultz said she hadn’t bought Ben & Jerry’s for six years because “it’s been clear to me that most of their decisions are not aligned with my values,” and most of her family members have now also sworn off the brand. The Florida congresswoman, whose state is one of the dozens that have enacted anti-BDS law, said she hadn’t given any thought to whether that should come into force in this case because, she reiterated, “it’s ice cream.”

Marc Rod contributed to this report.