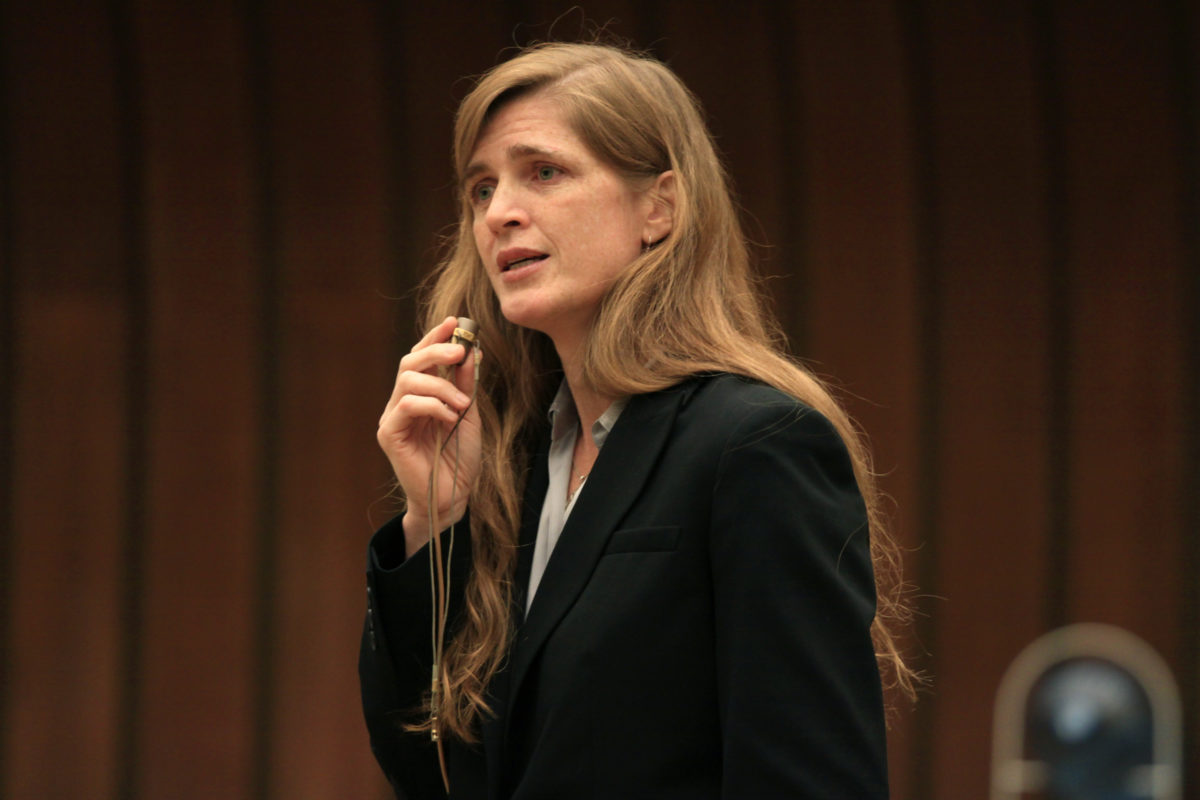 Samantha Power speaking about Sergio Vieira de Mello at an event at the United Nations Office at Geneva on June 1, 2010.

During a House Appropriations subcommittee hearing on Monday, U.S. Agency for International Development Administrator Samantha Power offered assurances that emergency aid to Palestinians in Gaza in response to the recent Israel-Hamas conflict would not end up benefiting terrorism or violate U.S. law.

“[Vetting is] incredibly important. We have to be faithful to the taxpayer above all and we need to prevent these resources from falling into the wrong hands. Everything in that region is vetted in accordance with the Taylor Force Act, in order to prevent anything from being diverted to Hamas,” Power said, referencing the 2018 law prohibiting the U.S. from transferring economic aid to the Palestinian Authority until it ceases payments to the families of individuals killed while conducting terror attacks against Israelis.

The legislation is named after an American tourist who was stabbed to death in March 2016 in a Palestinian terrorist attack.

“In the case of the Taylor Force Act,” Power added, “it also cannot benefit the Palestinian Authority,” she said. “There is the most vigilant and stringent scrutiny of our prime awardees but also those sub-grantees or grantees under the prime awards, and I think people can have confidence that this is going to the intended beneficiaries. We have systems in place.”

The Biden administration announced its intent to reinstate aid to the Palestinian Authority that was cut during the Trump administration, raising concerns among Republicans that such aid would violate the 2018 law.

Power, the former U.S. ambassador to the United Nations during the Obama administration, said that the U.S. is currently working with organizations like Catholic Relief Services, the World Food Programme and the East Jerusalem Hospital Network to provide aid to Palestinians, as well providing food vouchers and cash directly to individuals.

She added that the U.S. is also focusing heavily on water and sanitation programs with the goal of preventing disease outbreaks, as well as aiding individuals displaced by airstrikes in Gaza. Those Israeli airstrikes also reportedly destroyed some sewage systems in Gaza.

Amid the recent conflict, the USAID mission in the West Bank and Gaza is ramping back up — after being reinstated by the Biden administration — Power said, adding that the director of the mission arrived in the region last week, and humanitarian funding is moving forward after Republican senators lifted their objections.

In the longer term, Power said the U.S. is looking to promote development programs, such as the Middle East Partnership for Peace — a fund that provides support for people-to-people programs and joint Israeli-Palestinian economic ventures — to change the underlying conditions surrounding the conflict.

Power sparred with Rep. Mario Diaz-Balart (R-FL) over her approach to Israel including her abstention as U.N. ambassador from a December 2016 vote on U.N. Security Council Resolution 2334, which condemned Israeli settlements.

The U.S. abstention on UNSCR 2334 came at the direction of President Barack Obama, she claimed, and added that the resolution “includes the tenets that administrations in both parties have stood behind for a long time, namely support for a two-state solution.”