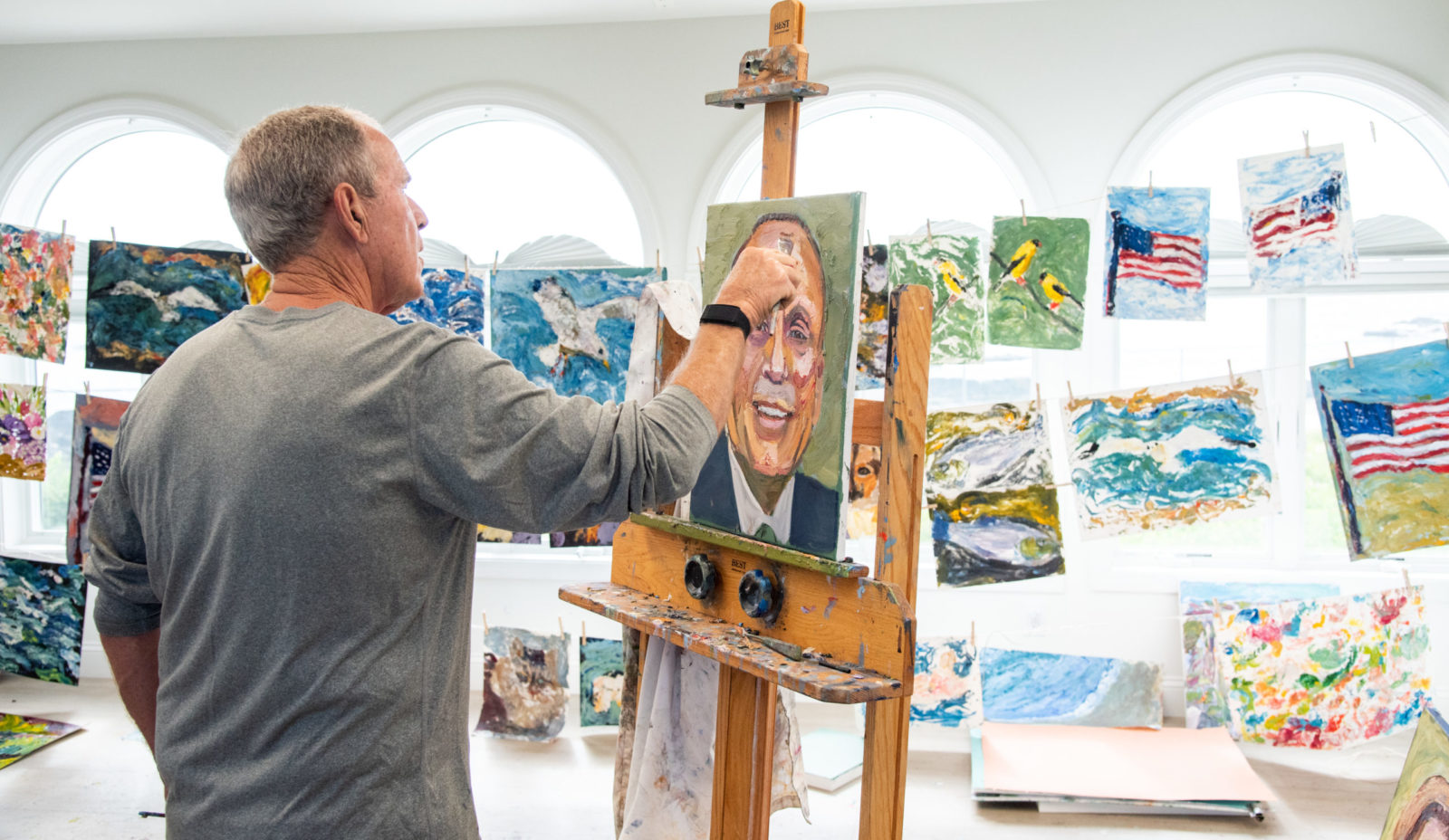 In his new collection of oil paintings, Out of Many, One: Portraits of America’s Immigrants, former President George W. Bush has assembled a deeply personal tribute to a long list of immigrant entrepreneurs, intellectuals, activists, athletes, public servants and other figures whose contributions to American society he admires.

“Throughout my life and career, I have had the privilege of seeing the profound and positive influence of newcomers,” writes Bush, whose subjects include former Secretary of State Madeleine Albright, professional baseball player Albert Pujols, former PepsiCo CEO Indra Nooyi and Chobani founder Hamdi Ulukaya. “I painted the portraits of people who, in the face of seemingly insurmountable obstacles, never lost faith in their future.”

The portraits — 43 in all — make a compelling argument for the value of immigration, now a subject of intense debate in American politics. So intense, in fact, that Bush admits he delayed publishing the book, which was released last month by Crown, until after the election. “I did not want the people I painted to become exploited politically,” he says. “While I recognize that immigration can be an emotional issue, I reject the premise that it is a partisan issue.”

“Today, Americans rightly worry about the consequences of a fast-changing world and a broken immigration system,” Bush acknowledges. “Unfortunately, as in the past, fear seems to dominate the discourse. In the process, we tend to forget the contributions immigrants make to our nation’s cultural richness, economic vitality, entrepreneurial spirit and renewed patriotism.”

In making the case for a humane approach to immigration, Bush has put forth a series of expressive, colorful and creatively textured portraits that demonstrate his increasing maturity as a painter. He took up the pastime a few years after leaving office, and since then has trained his brush on a variety of world leaders and veterans, who are the subject of his 2017 collection, Portraits of Courage: A Commander in Chief’s Tribute to America’s Warriors.

But Bush makes clear that his newly developed painting chops shouldn’t overshadow a more urgent message. “My hope,” he concludes, “is that this book will help focus our collective attention on the positive impacts that immigrants are making on our country.”

With that in mind, Jewish Insider spoke with four of the book’s subjects about the president’s message on immigration as well as the unique experience of being painted by a former president.

“I think he makes me look like a thinking person,” Henry Kissinger, the 97-year-old author and former statesman, said approvingly of Bush’s handiwork in an interview with JI. “I thought he did a terrific job, and if one considers that he had never had a paint brush in his hand until after he was president, that’s quite an achievement that he could do it.”

Kissinger, who is Jewish, arrived in the United States in 1938 as a refugee from Nazi Germany before ascending to the upper ranks of American government, most notably as President Richard Nixon’s secretary of state and all-around éminence grise, where he exerted a powerful — and polarizing — grip on American foreign policy.

During Bush’s two terms, Kissinger was often on call to lend his advice and input on any number of matters. “I was a good friend of Bush,” he told JI, “and I saw him quite often when he was president.”

“I think it was an important thing for the president to paint people who came to this country and contributed to the country,” Kissinger said, adding: “It is a tradition of this country to be receptive to immigrants.” Kissinger said he was “honored” that Bush had decided to paint him. “I’m very pleased with it,” he said of the portrait. “I’m going to hang a copy of it. Probably in my office, but in a very noticeable place.”

Dina Powell McCormick, who served in the Bush administration as director of presidential personnel and then as assistant secretary of state for educational and cultural affairs, was born into a Coptic Christian family in Cairo and moved to the U.S. when she was five years old.

“We’ve often talked about the fact that another big reason people come to the United States is to practice their faith freely,” Powell McCormick said of her conversations with the former president. “It’s extremely humbling as an immigrant to be part of President Bush’s new book,” she added, “and particularly, featured among such incredible immigrants who really represent the very best in our country.”

Powell McCormick, who now works as global head of sustainability and inclusive growth at Goldman Sachs, served as former President Donald Trump’s deputy national security advisor between 2017 and 2018. “I am so incredibly proud to be a citizen of our country and so proud that our nation is a place that so many people from all around the world have such a strong desire to come to,” she said. “I think that’s the message in the book.”

Powell McCormick said she has enjoyed reading the book with her daughters. “That’s probably been the most fun for me, is having them read the stories about these incredible immigrants,” she told JI, “and having them see that the common thread of all 43 is this intense desire to give back to a nation that’s given us so much.”

Mariam Memarsadeghi was born in Iran and came to the U.S. when she was seven years old, during the Islamic Revolution of 1979. Since then, she has become an outspoken advocate for democratic reform in her native country.

In 2010, she founded Tavaana, an educational initiative dedicated to empowering Iranian citizens, and now works as a senior fellow at the Macdonald-Laurier Institute, a think tank in Ottawa. In 2017, she was picked to serve in the Presidential Leadership Scholar program, a collaboration between several presidential centers, including Bush’s.

“It’s really constructive that President Bush has done this,” Memarsadeghi said of the book. “Particularly for the Republican Party, it’s important to recognize that we are a land of immigrants, and that the United States has historically gotten its hope, hard work, patriotism, optimism — and so much more, really — from immigrants, a source of constant renewal for democracy.”

At the Bush Center four years ago, Memarsadeghi saw some of the former president’s veteran portraits in person, and recalls being moved by them. “I had seen how he takes a very personal and passionate attachment to what he’s painting,” she told JI. “He tries to make other people feel the importance of these people’s lives through the portraits and the biographies.”

Growing up in Moscow under and after Soviet rule, Lev Sviridov was often beaten up for being Jewish. In 1993, he moved with his mother to the U.S. and endured further hardship while homeless on the streets of New York City. Through the Lawyers Committee for Human Rights — now Human Rights First — he met the businessman Tom Bernstein, now a mentor who helped Sviridov and his mother get back on track. Bernstein is a friend of Bush’s, which is how Bush found out about him.

Sviridov, a chemist and Rhodes scholar who directs the Macaulay Honors College at City University of New York’s Hunter College, said he was flattered when the former president’s chief of staff reached out to see if he would be interested in participating. “I thought, ‘Why not?’” Sviridov said.

“I think it’s great that he started by painting people who were political figures and allies of his and moved on to celebrating veterans and trying to bring awareness to veteran issues,” Sviridov told JI. “But I think in many respects, especially now, to bring out the issue of immigration, and to try to highlight the issues that immigrants face and the assets that they bring to this country, and to try to change the narrative, is quite important.”

Right before the pandemic, Sviridov got the chance to spend time with Bush at an event in New York. “He showed me some of the drafts and sketches,” Sviridov said. “The only thing I said was that my nose was coming in too sharp,” he joked. “But he said that he thought he nailed it, so what are you gonna do?”

“What can I say? I’m a chemist,” Sviridov added. “I’m not an art critic.” Still, Sviridov suggested that witnessing the former president’s artistic process was ultimately profound. “There’s nothing, frankly, more intimate than sitting down to paint someone,” he said. “But I’m also cognizant that this is a great way for us to refocus a broader debate and a broader conversation on what it means to be an immigrant in America.”