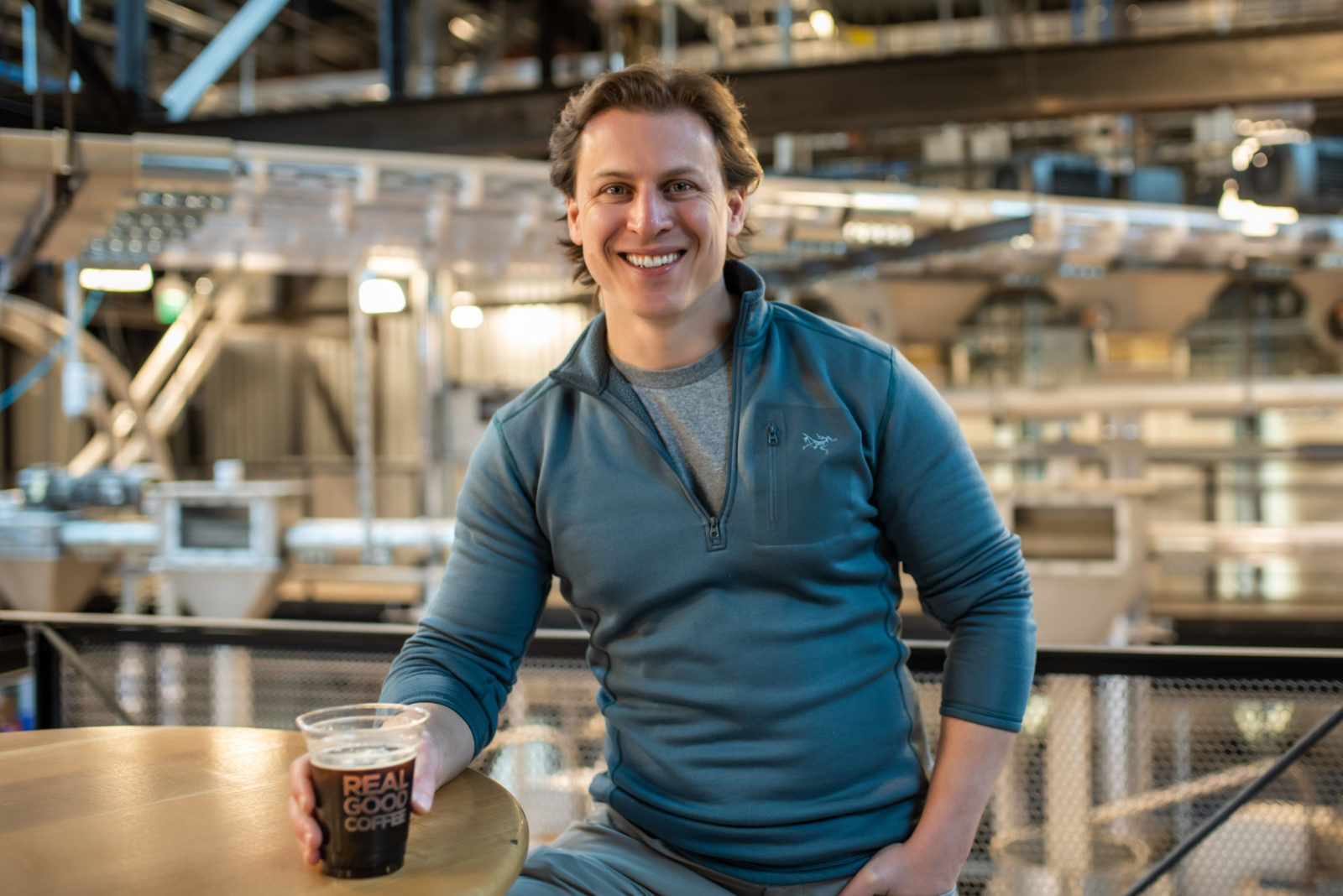 When I visited Compass Coffee’s new Washington roastery last week, Compass co-founder Michael Haft greeted me with a cup of his company’s blend in hand. It wasn’t his first cup of the day; he usually starts with a shot of espresso, before switching to cold brew and then chamomile tea in the afternoon.

Inside the 50,000-square-foot roastery, Haft, 34, poured me a glass of cold brew from a pitcher in a mini fridge that sat in an unoccupied corner of the warehouse. Tape on the floor next to the fridge showed the outline of where a coffee bar would be built when the roastery opens to the public with a full-service cafe in a month and a half — or, more likely, longer. ”In construction, you always say six weeks,” Haft joked.

Located in Northeast Washington’s Ivy City neighborhood, the roastery will eventually be able to accommodate several dozen cafe-goers who can enjoy their coffee while watching the next batch being brewed. A winery, breweries and distilleries dot the streets of this formerly industrial neighborhood, and Haft and his neighbors are gearing up for what they pray will be a busy, post-pandemic summer. Although Compass has occupied its Ivy City space for five years, it took the coronavirus pandemic to jump-start construction on the facility that will eventually produce 10 million pounds of coffee a year.

In the seven years since Haft and his business partner Harrison Suarez opened their first cafe in Washington’s Shaw neighborhood, Compass has become a local favorite. “You don’t meet many people like him in Washington. There are a lot of lawyers. There are a lot of government folks. There are very few coffee entrepreneurs,” said Aaron Miller, associate rabbi at Washington Hebrew Congregation, the synagogue where Haft had his bar mitzvah. Haft now sits on the steering committee of the synagogue’s young professional network.

Haft’s path to becoming a coffee entrepreneur was unconventional, particularly for a Jewish kid from a well-to-do family, whose father, Robert Haft, was himself a well-known serial entrepreneur. Haft decided to join the Marines after a summer finance internship in Bethesda. “I hated it so much,” said Haft, who at the time was an undergrad at Washington University in St. Louis. But one day on his commute home, he passed a Barnes & Noble bookstore and picked up One Bullet Away, a memoir by Dartmouth student-turned-Marine Nathaniel Fick.

In the book, Fick described a 10-week training program he did before officially joining the military. “You can literally just go and train with the Marine Corps, and, you know, they’ll beat the shit out of you, and at the end of it, you can walk away,” Haft said. The idea sounded crazy at first: “Nobody in my family is in the military. I don’t think I knew anyone in the military,” he said, “but I was so disillusioned with finance and office culture. It just felt soulless.” He decided to join the Marines.

It was 2007 — “not a great time in Iraq,” Haft acknowledged. “My parents were quite upset. They’re like, ‘We didn’t raise you to do this,’” he recounted. But eventually they came around and supported his decision.

Years later, his now-girlfriend — Sofia Gross, head of policy partnerships and social impact at Snap, Inc — reached out to him on the dating app Bumble after seeing that he had served as a Marine. “She swiped right, because Jewish Marine? There’s not a lot of them,” he said, smiling. (He only knew of one other Jewish Marine who had served at the same time as he did.) His girlfriend’s grandparents had survived the Holocaust, which inspired her to consider joining the IDF — perhaps a more common path for Jewishly involved young people than joining the U.S. military — but she ultimately joined the U.S. Navy. “That’s why she wanted to talk to me as a Jewish Marine. She wanted to meet somebody else who was Jewish in the American military,” Haft said.

Before launching Compass Coffee together, Haft and Suarez served together for the entirety of their time in the Marines, from training camp to combat in Afghanistan. “It happened by accident. It’s so, so strange. It never happens that two people make it all the way through this process together,” Haft said. Suarez had also attended Washington University, but it took joining the Marines for the pair to become friends.

When they left the military, the pair knew they wanted to go into business together, but they weren’t sure in what field. Their first plan was to do digital publishing, which they attempted with an e-book on coffee, called Perfect Coffee at Home. They quickly learned that digital publishing — though “a lot of fun” — was “not a good business,” Haft said, and “we lost money doing it.”

So instead, they took what they learned in writing their coffee e-book and scaled up. “That’s been the last seven years, learning every step in the process from sourcing to roasting to packaging to distributing and making drinks, to teaching baristas about how to engage with customers,” Haft said. He and Suarez had to learn everything about coffee from scratch, but Haft said that process was “quite liberating — [learning] without the constraints of, ‘This is how it’s always been done.’”

Building things from scratch is somewhat of a mantra at Compass. The roastery’s basement houses a furniture shop, where a design team creates and builds each cafe’s chairs, tables and couches. Everything in the roastery, too, was engineered from scratch. Chas Newman, who oversees engineering at Compass, explained, in engineer-speak, that the industrial roaster is just a “different version of every other conveyor system, so once you start to figure out how anything works, it becomes easier to apply it.” Sounds easy enough, until you look around and see the obvious complexities of outfitting a massive warehouse with the machinery to efficiently roast, grind and package beans, and make Compass’s homemade syrups, and ship e-commerce orders.

Haft turned on the massive roasting machine to demonstrate how the coffee beans get roasted. Thousand-pound silos house the beans, which are then transported to the roaster, which heats the beans at 1,000 degrees for 15 minutes. Different “aromatic milestones” mark each step of the process. “When we get to about 300 degrees, the coffee starts smelling like wet grass. It’s not sexy,” Haft explained, pulling out some beans to sniff. Next up is “hay, and then baking bread, and then cookies,” before the machine gives off the distinct smell of freshly roasted coffee beans.

Before the pandemic, Compass operated 12 cafes in Washington and Northern Virginia. Many are in now-empty business districts. “Last year, in March, we were dropping 5 to 10% every day,” Haft recounted. “The first day you’re like, wow, that’s crazy. And then at the end of the week, you’re down, like, 70%.” When it became clear that the pandemic would not be a short-lived phenomenon, Haft and Suarez shut down half of Compass’s locations.

Two downtown cafes recently reopened for the first time in nearly a year. Haft has an app on his phone that allows him to compare sales at any cafe to a week, month or year prior. At the reopened locations, the numbers were up from zero — yet sales remained lower than they had been even during that first horrible week last March when the numbers had plummeted.

“We’re trying to stay alive as a business,” Haft said. Compass Coffee is now sold at Whole Foods, and he hopes other grocery stores will be next. People can also buy the coffee directly from Compass’s online store. But it’s not a perfect solution: “E-commerce is hard. Packing boxes, I know it sounds silly, is a lot of work,” Haft explained.

Another COVID-era innovation for Compass has been Haft’s weekly appearance at a virtual Torah study event. Each Wednesday morning, he kicks off Washington Hebrew’s “Espresso Shot of Torah” parsha discussion by teaching attendees something about coffee.

“We have 50 people who show up pretty regularly. Any one of them could be a barista based on his training,” said Miller, the Washington Hebrew rabbi. His relationship with Haft predates the pandemic, back to a time when Compass would donate coffee and snacks for events at the synagogue. “He’s always volunteered. He’s donated freely, and with an open heart,” Miller added. 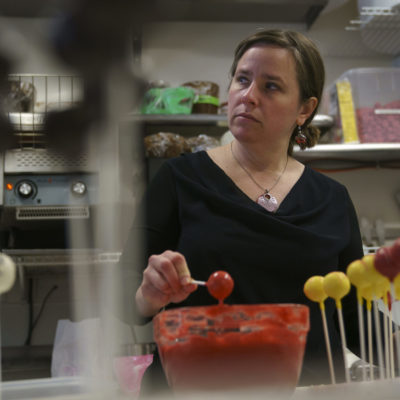 The Jewish community is not the only local community Compass has served during the pandemic. The company recently hosted a chai tasting with the Washington region’s Muslim Bar Association, where members received a chai kit from Compass but also had the opportunity to share their own chai recipes. And during the Black Lives Matter protests last summer, a Compass van would show up wherever people were gathering to deliver water and snacks. “People at Compass generally want to be involved in the community,” Haft said.

He applies the same thinking to his family. When our meeting ended, Haft left to drive across town to pick up his mother. She was finally due for her COVID-19 vaccine appointment, after a winter of family visits outside his parents’ Dupont Circle home. “He has a generous soul,” Miller said. “He really does.”