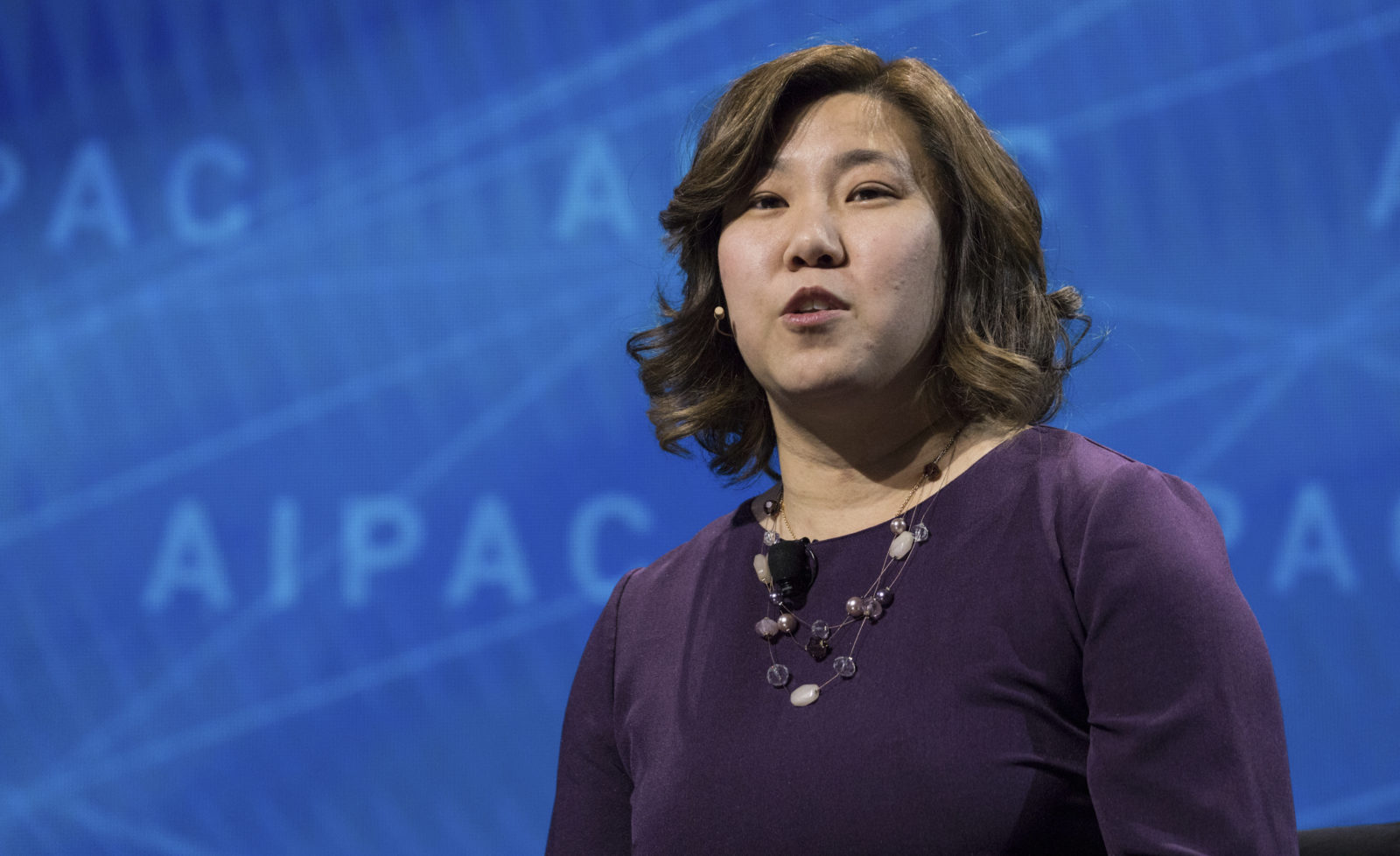 Grace Meng vows to protect her constituents from rising hate

Since she assumed office in 2013, Rep. Grace Meng (D-NY) has earned a reputation as a staunch ally of the Jewish community and a vocal advocate of pro-Israel causes. The 45-year-old Queens congresswoman has jumped into the fray on a range of issues, including a successful effort early in her tenure to secure federal disaster aid for houses of worship and several bipartisan resolutions such as those honoring Israel’s independence, recognizing Israeli-American heritage and commemorating the liberation of Auschwitz. More recently, Meng was among a group of representatives who spoke out against the solicitor general for siding with Germany in a Holocaust-era art restitution case.

All the while, she has emphasized her support for Israel as a member of the powerful House Appropriations Committee which helps oversee funding for the Jewish state.

“Whenever there’s an issue involved with the Jewish community, you always see Grace’s name,” said Mark Weprin, an attorney who served with Meng in the New York State Assembly before she ascended to the House of Representatives. “She’s like a haimish hero.”

As she enters her fifth term in Congress, Meng is now expanding her portfolio on Jewish issues. In February, she was selected as vice chair of the appropriations subcommittee on state and foreign operations, and last week, she was named co-chair of the House Bipartisan Task Force for Combating Antisemitism — an appointment she views as an opportunity to unite two seemingly disparate communities as incidents of antisemitism have increased alongside hate crimes against members of the Asian-American community.

It’s an approach that typifies her time in Congress. “I represent a district that’s really diverse,” Meng, the daughter of Taiwanese immigrants who represents Bayside, Flushing and Forest Hills, among other neighborhoods in Queens, told Jewish Insider in a recent interview. “The heart of my district is Main Street, where on one side is a predominantly Asian community, and on the other side is a predominantly Jewish community.”

“For the seven or eight years or so that I’ve represented this district,” she said, “I’ve always tried to find ways to bring the two communities or different communities in general closer together.”

That view extends to Israel — an issue that, somewhat unusually, was front and center during Meng’s first campaign for Congress, in 2012. The primary, in which Democratic candidates were locked in a heated battle to earn support from Jewish voters, came to be known informally as “Israelapalooza.” Since her election, Meng has proven that her support for the cause was not merely superficial.

This past week, Meng held a virtual meeting with Gilad Erdan, Israel’s newly appointed ambassador to the U.N. and U.S. “I invited him to our district, so hopefully that will happen,” Meng said, adding that they discussed, among other things, her work securing nonprofit security grants for synagogues in her district.

“Just in the last few days, we had a break-in at one of our local synagogues,” Meng told JI. “Fortunately, they had the equipment, like the cameras, to catch the perpetrator and to see exactly what happened, and luckily, no one was hurt. But this is something that is really important.”

“Grace is somebody who we in the organized Jewish community can depend on and rely upon,” said Michael Miller, executive vice president and CEO of the Jewish Community Relations Council of New York, who accompanied Meng on her first trip to Israel when she was a state assemblywoman. “She is a true friend, both with regard to her Israel positions, her concern for the welfare of Jews all around the world and, clearly, the welfare of the American Jewish community.”

David Greenfield, CEO of the Met Council, agreed. “She’s been one of the top Democratic leaders in the country who are vocally pro-Israel,” he told JI. “She doesn’t have to do this,” Greenfield added. “But it matters to her, she’s passionate, and she really goes out of her way.”

Meng has occasionally found herself at odds with some Democratic Party members on Israel, particularly in New York, where over the summer the Democratic Socialists of America released a questionnaire asking local candidates to pledge not to visit Israel if elected. Though Meng denounced the questionnaire as “irresponsible and divisive,” she views such debate as healthy, particularly for those who have not given much thought to the Boycott, Divestment and Sanctions movement.

“Even though that was an unfortunate situation, because of that survey, a lot of conversations were had, and people were able to better understand the antisemitic nature of the BDS movement,” she told JI, adding: “We need to have these conversations. There are people who are newer to politics, newer to Democratic Party politics, and we need to use these opportunities to take a stand on issues like BDS. I think, if it opens opportunities for these sorts of important discussions, then ultimately that’s a good thing.”

Given this view, it’s no surprise that Meng believes the apparent rift between moderates and progressives has been overplayed since the November election, when several vulnerable Democrats lost their seats.

“Right after the election, when there seemed to be this sort of finger-pointing, I don’t accept any of that,” said Meng, who recently completed a four-year term as a vice chair of the Democratic National Committee. “We don’t have space for that. I don’t have patience for finger-pointing. I think there’s something to be learned from everyone, and I think that we can do a better job at getting the message out to make sure that we understand what Democrats are doing to improve people’s lives.”

Still, Meng hasn’t always taken the conciliatory route. Most notably, in 2016, she bucked the party line in voting against the Iran nuclear deal — a decision that put her at odds with the majority of her Democratic colleagues. Ultimately, though, she is comfortable with the choice, noting her concerns regarding inspection procedures as well as the sunset clauses that she believes were set to expire too early. “I know it wasn’t a popular opinion amongst my colleagues and my party at the time,” she said, “but I’ve never regretted that vote.”

Now, as Biden weighs reentering the agreement, Meng is taking a wait-and-see approach, just this week having signed on to a bipartisan letter loosely laying out a middle path on how best to proceed on rapprochement with Iran. Though Meng believes former President Donald Trump’s decision to withdraw from the deal was imprudent — and may have damaged America’s reputation abroad — she argues it would be unwise to rush back into a flawed old agreement.

“I know there’s a lot of pressure on President Biden to rejoin the deal, and I understand that we want to show the world that diplomacy is back,” Meng acknowledged. “But it’s very complicated, it’s not going to be easy, and we can’t just automatically settle back into the agreement. So I’m just pushing for slow, cautious and measured actions on the side of all parties, and to make sure that any deal that we head into is based on the situation today, what’s on the ground, what’s happened, and precautionary measures that would need to be included that were not, in my opinion, five years ago. That deal was five years ago. We need to be very careful.”

With the new term heating up, Meng has a number of other more concrete goals in mind. She is optimistic, for instance, that a bill she introduced last year will have more luck on the second go-around. Dubbed the COVID-19 Hate Crimes Act, it calls for increased resources at the Department of Justice to combat and keep track of hate crimes.

“We just need more data and making it easier for people to report it,” Meng told JI, “to get that information from local law enforcement to the federal government, which has really been a challenge in years past.”

Jonathan Greenblatt, CEO of the Anti-Defamation League, commended Meng’s efforts on such initiatives. “Representative Meng is leading the fight against the rise in discrimination against the Asian American and Pacific Islander community,” he told JI. “This is a natural role for her, not only as an Asian-American leader, but as a person committed to fighting hate in all forms.”

“I look forward to her continued leadership on this issue,” Greenblatt added, “and her leadership as one of the new co-chairs of the House Bipartisan Task Force for Combating Anti-Semitism — one of the most important institutions in Washington for keeping the fight against antisemitism from being dangerously politicized.”

Ari Berman, president of Yeshiva University, where Meng received her law degree, said the congresswoman “represents the best of our great institution” in an email to JI, adding that she is a “trailblazing national leader, advocates for Israel and stands for justice and fairness to all.”

Meng’s profile in state and federal politics is rising after nearly a decade in Congress, leading to speculation that she may outgrow the seat in the near future. A recent Politico article posited that Meng could prevail in the next gubernatorial race as New York Gov. Andrew Cuomo faces mounting accusations of sexual impropriety.

“I was honored to be mentioned amongst many of my qualified colleagues,” Meng said of the mention, leaving it at that.

While some Democratic lawmakers have called for the governor to resign, Meng has taken a characteristically more cautious approach. “I’ve called for an investigation that is independent,” she said. “I support our attorney general. I want to make sure that she has the opportunity to conduct that investigation. The allegations are disturbing, but he is also entitled to due process. So for now, I’m reserving further judgment until after the investigation.”

When she isn’t busy with her day job, Meng said she has been meeting with candidates in New York City’s upcoming elections for mayor, comptroller and City Council. “I will be making some endorsements, and that includes in our district where the Jewish community and our leaders are very involved and very vocal,” she told JI.

Ever mindful of her constituents’ interests, Meng emphasized that she would be carefully weighing their concerns as she arrived at her decisions. “I want to make sure that they have a voice in the process.”