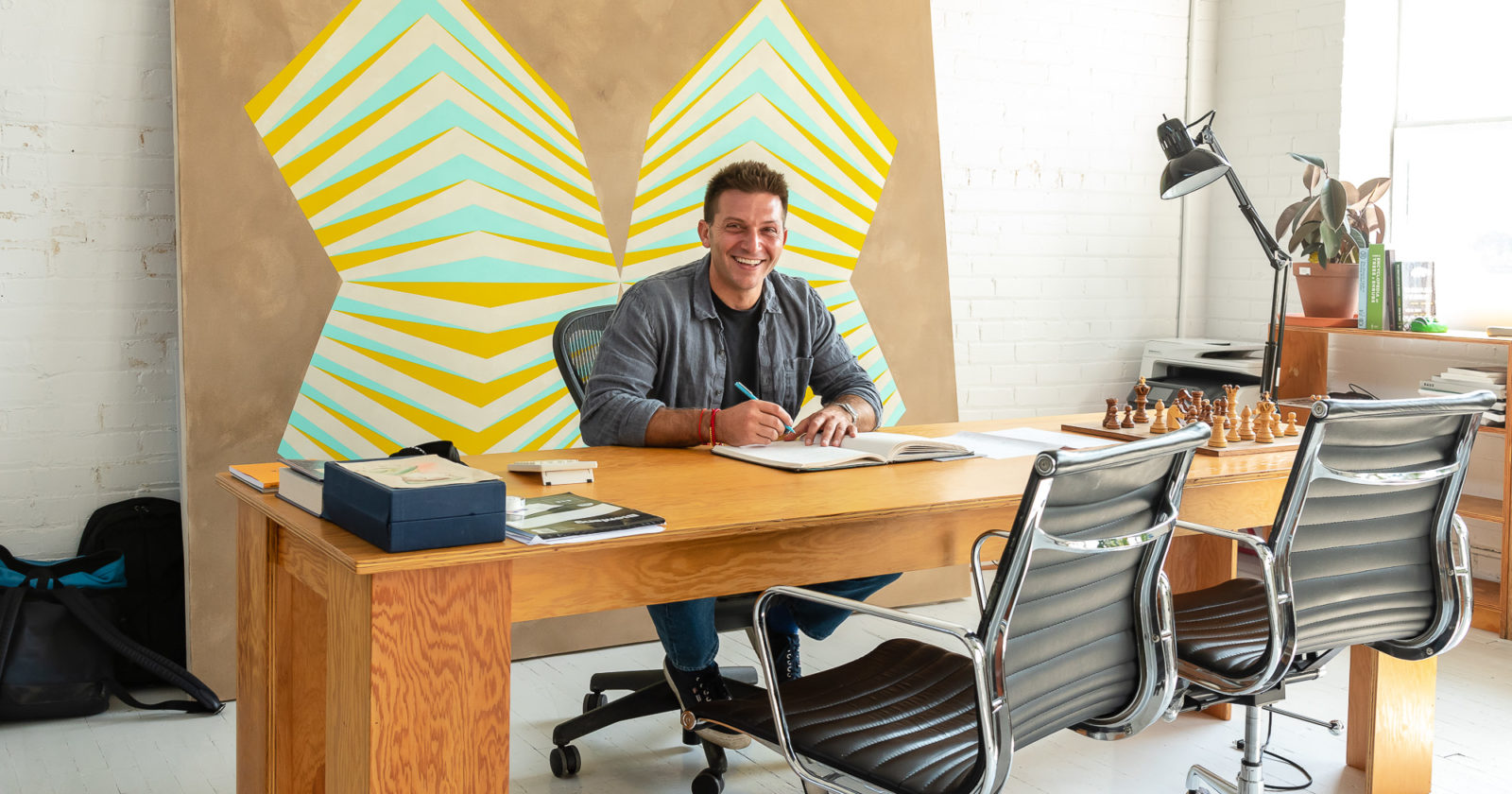 From Motor City to the Holy Land

Real estate developer Philip Kafka has left his mark on Detroit. And now his heart is set on Israel

But now Kafka, founder of the Prince Concepts real estate firm, is looking to expand his cultural and spiritual horizons — in Israel.

“I just applied for my Israeli citizenship,” Kafka told Jewish Insider in a recent interview. “I want to start spending more time in Israel, and this is the time to do it.”

The 34-year-old Texas native is no stranger to new adventures. In fact, he’s built quite a career setting up shop in new places and forging new paths. Born in Dallas to a father from Brooklyn and a mother from the Lone Star State, Kafka studied philosophy at Northwestern University, and pursued a brief professional tennis career. He then landed in New York in search of his first real job — but never found one.

Instead, he launched his own billboard business, Prince Media Company, in 2010, and built it up until he sold it in 2015 as “the second biggest sign company in New York City proper,” he said.

“I’ve never had a job,” Kafka told JI, noting that he was always focused on his tennis game. “And then I started my own business and it’s worked.” Kafka credits his parents for imbuing him with an entrepreneurial spirit. “They gave me confidence and endowed me with a sense of fearlessness, so to speak,” he said. “Everything I felt like I needed to know I was learning from my parents. And they were always great role models to me.”

Kafka’s first visit to Detroit didn’t come until 2012, when he arrived on a business-related trip for Prince Media. But something about the down-on-its-luck city spoke to him, and he found himself returning again and again. Where others saw a city in decline — it famously filed for bankruptcy in 2013 and its population has plummeted — Kafka saw potential.

“If you really sort of look at the fundamentals of it… you still have a metroplex area — Detroit and the suburbs are [around] five million people,” he said. “There just seemed to be this void in the middle of it.”

And he ignored the advice of those around him as he dove straight into his vision.

Starting with a restaurant that opened in 2016, Kafka has expanded his Detroit footprint immensely over the past five years, implementing more than a dozen projects, largely focused around the Core City neighborhood.

“It was fundamentally what anybody in real estate would tell you not to do,” he said. “There was nothing around me, there was no market… there were just no people. I bought this totally empty area, and I bought three old industrial buildings and I got four acres of land,” he recounted. And several years later, he said, “I have 20 acres of land over here, I renovated all these old industrial buildings. I’ve got restaurants, coffee shops, all the startup businesses are moving into my buildings over here. I built an awesome housing project, which has won a ton of awards.”

His first Detroit venture, the successful Takoi eatery, was a trial balloon of sorts.

“I never wanted to be in the restaurant business,” he said. “When I started buying real estate in Detroit, I knew what my big vision was.” After purchasing multiple buildings and land in an area “off the beaten path,” he said, “I needed to figure out how to bring people there. And the number one way that I knew how to bring people somewhere new was food.”

The project, in collaboration with chef and food truck operator Brad Greenfield, was also a way “to take people’s temperature, to really understand the market, do people spend money here, what are people like here, what are their spending habits?”

The Thai-inspired restaurant became a major success, although Kafka experienced somewhat of a setback when burglars set a fire that destroyed much of the eatery less than a year after it opened. But the incident didn’t scare him off.

“I knew exactly where I was doing business,” he said. “I was in Detroit, Michigan, a tough town. And I came back up and I started rebuilding the restaurant immediately,” this time with a “16-foot architectural cage that goes around the entire property, and now it’s become an icon.” The restaurant returned to its earlier success, “and that really invigorated me.”

Kafka and Greenfield later opened another eatery, Magnet, in 2019, but the restaurant closed last year, a casualty of the pandemic, and the two dissolved their partnership.

“I owned three restaurants before COVID, and now I own zero restaurants,” Kafka said. “I never really wanted to own restaurants anyway, but I ended up with them,” he averred. “Now I’m just a landlord to three independent tenants in their own businesses.”

And Kafka has never been afraid to think out of the box — or in this case, the house. One of his earliest and most iconic Detroit projects is True North, a residential neighborhood made up entirely of Quonset huts: eye-catching semi-cylindrical structures made of corrugated steel and based on an old military design.

“I knew they were fast and cheap to build,” he said, “but I also knew that we could build them tall and wide, with no columns in the middle, and make a great quality space.” The prefab structure, he said, meant he could “create a great quality apartment for a low cost,” and design “museum-quality spaces to live in.” To that end he teamed up with famed architect Edwin Chan, a veteran partner of Frank Gehry. The 10 Quonset hut rental units, which opened up in 2017 with a tenant waiting list, have since won awards for innovation and design.

Kafka has faced accusations of gentrification by some in Detroit, but he maintains that his work has been welcomed in the area.

“I planted myself right in the middle of the neighborhood,” he said. “I’m a guy that’s on the streets; I’m wearing jeans and a T-shirt every day.”

Are people “in the city more skeptical of a young white guy from New York coming in? Yes, but I proved myself,” Kafka added. “My work speaks for itself, my office is right in the middle of the neighborhood — I’m here all the time. I’m not some developer that’s running this project from some office downtown or even worse, from some office on the coast. I’m actually in the neighborhood on a daily basis.”

And over the past five years, Kafka has continued to work on a series of projects building out from the True North development, with a focus on expanding the Core City project — which includes extensive public areas and green spaces. At the moment, he is completing work on “The Caterpillar,” another Quonset hut — this time a 9,000-square-foot structure housing six residences and two live-work spaces.

But as Kafka’s professional success has grown, he found himself searching for more meaning.

In Detroit, he said, “I’m not surrounded by a ton of Jewish people. And as I get older and as — thank God — I have more success and I achieve more fulfillment in my professional life, I realize how limited that is,” Kafka added. “I want to get closer to the spiritual world, and that’s our religion, and Israel, I feel, is very close to that source. I feel great there — culturally and spiritually.” While Kafka doesn’t have any immediate family in Israel, he has visited many times over the years, including a two-month stint studying Hebrew in 2019.

“I just want to get closer to my culture, my roots,” he said. Kafka, who described himself as more culturally than religiously Jewish, said “we had Shabbat dinner as a family every Friday night growing up, but I didn’t go to Hebrew school after I had my bar mitzvah. We did go to synagogue on the High Holy Days.” But in recent years, he said, he has become “more connected to Judaism.”

Once his aliya paperwork is in place, Kafka hopes to eventually split his time 50/50 between Detroit and Israel. But his plans in the Holy Land are focused more on the personal and less on the professional.

“Great work emerges, it doesn’t descend,” he said. “I don’t want to go to Israel with a preconceived notion of what I can do and just try to impose or descend upon the market, whether it’s real estate or whatever I choose to do there.”

“I’m a creative person so I’ll always come and find ways to work,” he added. “But I’m not going to look for my primary source of income to come from Israel… I want to really get to know the market,” he said. “I don’t have to hit the ground running. I want to take time to really figure out what I would want to do there.”

At the end of the day, he said, he is guided first and foremost by his faith.

“The only thing that we can trust and really have faith in is God, I do believe that,” he said. “I think that when you have faith in God, and real faith and real trust in God’s plan, you just have the courage to go through life. And you just believe and you work and things happen.”