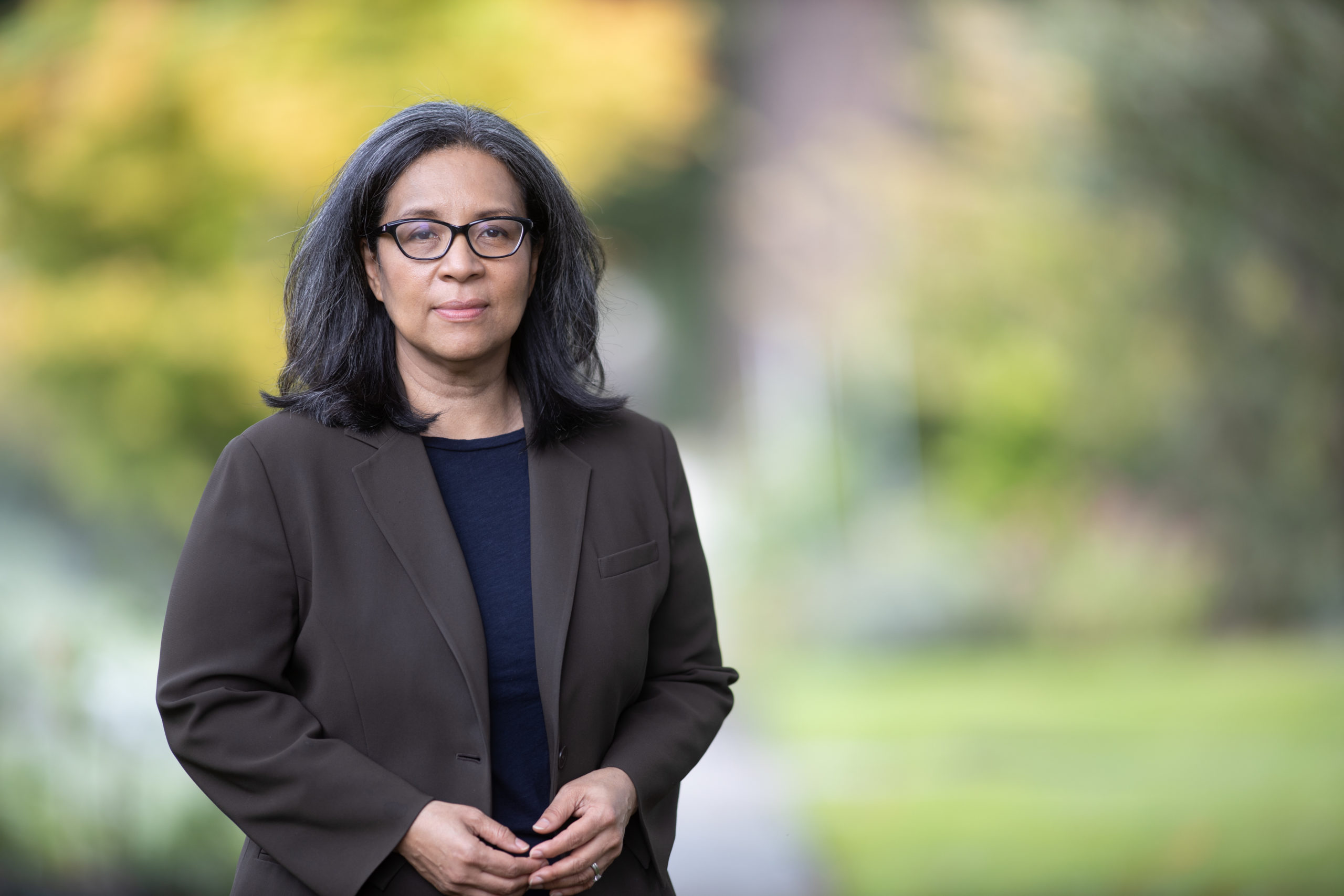 Marilyn Strickland has a city hall handbook for Congress

When Rep. Marilyn Strickland (D-WA) appeared at her swearing-in ceremony on Sunday wearing a traditional Korean hanbok, she was both highlighting her unique background and nodding to a historically diverse congressional makeup that includes unprecedented numbers of both women and racial minorities.

“As a woman of both Korean-American and African-American descent,” Strickland, who was born in Seoul, wrote on Twitter, “it was deeply personal to wear my hanbok, which not only symbolizes my heritage and honors my mother, but also serves as a larger testament to the importance of diversity in our nation, state and the people’s House.”

The 58-year-old congresswoman set a variety of precedents when she was elected to represent Washington’s 10th congressional district in November, defeating her opponent, fellow Democrat Beth Doglio, by nearly 14 percentage points. Strickland is the first Black representative from the Pacific Northwest and — along with newly elected Reps. Michelle Steel (R-CA) and Young Kim (R-CA) — one of the first Korean-American women in Congress.

“The freshman class on the Democratic side of the House is smaller — it’s only 15 people,” Strickland said in a recent interview with Jewish Insider, comparing her party’s haul to Republicans who picked up a bounty of seats this cycle. “But we call ourselves small but mighty.”

As she navigates life on the Hill, Strickland is drawing in particular on her experience as mayor of Tacoma from 2010 to 2018. Her previous role, she says, gives her insight into some of the tasks she expects to take on as a congresswoman, including the more immediate goal of securing additional relief for struggling Americans amid the coronavirus crisis.

“You have to focus on doing most of the things that are not sexy,” she said. “We tend to highlight or amplify the things that grab headlines when, generally speaking, it’s doing the mundane stuff that just keeps things going, which really is why you’re sent there.”

In December, Strickland was appointed to the House Committee on Transportation and Infrastructure — her top choice for a committee assignment as she seeks to address mass transit infrastructure, broadband and clean energy in her district, which includes the state capital of Olympia. “Those are things that definitely have an impact on the 10th,” said Strickland, who served as CEO of the Seattle Metropolitan Chamber of Commerce before she ran for Congress.

“She has a really strong record, and I think she’s going to really govern on the issues that she ran on,” said Jessyn Farrell, a Jewish community member in Seattle who previously occupied a seat in Washington’s state legislature. “She’s going to be a great urbanist and she’s going to be a really great champion for workers and small businesses.”

In conversation with JI, Strickland spoke enthusiastically about President-elect Joe Biden’s nomination of former presidential candidate and former South Bend, Indiana, Mayor Pete Buttigieg as transportation secretary. “I remind folks that Anthony Foxx is a former mayor who served as secretary of transportation,” said Strickland, swatting away criticism that Buttigieg is unqualified for the job. “I think Pete is innovative, he brings the lens of local government, he has an approach that’s very inclusive, and he will also think about equity.”

On Tuesday, Strickland was also granted a spot on the House Foreign Affairs Committee, according to a staffer from her office — an appropriate posting given, for one, that Washington is among the most trade-dependent states in the country. “We have to restore our place in the world,” Strickland declared. “People look to us for global leadership, and we want to make sure that we have trust and credibility not just here at home but abroad.”

Strickland has garnered widespread support from pro-Israel activists in the Pacific Northwest, and notched an endorsement from the grassroots advocacy group Pro-Israel America during her campaign. The congresswoman supports a two-state solution to the Israeli-Palestinian conflict, rejects the Boycott, Divestment and Sanctions movement, and is in favor rejoining the Iran nuclear deal, as President-elect Joe Biden has pledged to do.

“It’s one of those issues that was controversial when it took place, and even within the Jewish community, people are divided about it,” Strickland said of the agreement. “The reality is that Iran does pose a threat in the Mideast, and we always want geopolitical stability and national and global security.”

“I think the question is going to be, ‘How do you go about it?’” Strickland added. “You have elections coming up in Iran this summer. We need to form relationships and find out what we need to do. We need domestic support and international support. More than anything, we have to make the case to Iran that it’s in their best interest to cooperate.”

Though she has never been to the Middle East, Strickland intends to visit Israel once it is safe to travel again after the pandemic has subsided. “I look forward to that trip,” she said. “You read a lot about places, you talk to people, but until you actually have the chance to physically visit, it just gives you a very different perspective.”

During her campaign, Strickland earned support from Congressional Black Caucus heavyweights including Reps. Hakeem Jeffries (D-NY), Joyce Beatty (D-OH) and Jim Clyburn (D-SC) — alliances that will serve her well now that she has joined the caucus.

“I am pleased to work alongside Congresswoman Marilyn Strickland in the 117th Congress,” Clyburn, the House majority whip, said in an email to JI on Tuesday. “As I’ve said before, she is the kind of proven leader we need in Congress. I have no doubt she will work tirelessly on behalf of Washington’s 10th congressional district while doing her part to rebuild America and secure America’s families.”

Strickland casts herself as a moderate Democrat. Following an unexpectedly poor showing on November 3, progressives have taken heat from moderate representatives who blamed far-left messaging around socialism and defunding the police for driving voters away in swing districts. During the election, Doglio, Strickland’s opponent, earned endorsements from progressive stalwarts like Sen. Bernie Sanders (I-VT) and Rep. Alexandria Ocasio-Cortez (D-NY) in a race that some experts came to regard as a microcosm of the growing ideological divide within the Democratic Party.

But the newly elected congresswoman from the Evergreen State was mild-mannered in addressing her party’s schism at a moment when Democratic leaders are hoping for unity as they hold onto a slim majority in the House.

“People call it a big tent, but the tent is pretty enormous,” Strickland said of the Democratic Party. “We have a lot of people from different parts of the country with diverse backgrounds, in every sense of the word, who may have differences on how we achieve some of our goals. But I still come back to this whole concept of shared values and why we all got into this.”

She acknowledged that there are “absolutely” some disagreements. “But even during freshman orientation, when we were nominating and electing leadership in the party, I would see people who were moderates nominating progressives, I would see progressives nominating and seconding moderates,” Strickland said. “I think that there are relationships that exist that are strong and united, and sometimes the rift seems more overblown.”

Strickland succeeds former Rep. Denny Heck (D-WA), who stepped away from his House seat to run for lieutenant governor. “I will definitely take the mantle for him,” she said, noting Heck’s role in increasing funding for affordable housing.

As for other role models, the congresswoman pointed to Rep. Marcia Fudge (D-OH) — who backed Strickland during her campaign and is now poised to lead Biden’s Department of Housing and Urban Development — and Rep. Lauren Underwood (D-IL), who flipped a historically Republican district of Illinois in 2018 and was elected to a second term this cycle. “One of those people who just quietly gets it done without fanfare,” Strickland said of Underwood. “She’s very effective.”

Since being elected, Strickland has joined — along with the Congressional Black Caucus — the Asian Pacific American Caucus and the New Democrat Coalition, which inducted four other new members ahead of the new term: Reps. Sara Jacobs (D-CA), Carolyn Bourdeaux (D-GA), Kathy Manning (D-NC) and Deborah Ross (D-NC).

“The New Dems were very instrumental in helping me get elected, and my politics allied with theirs,” Strickland said of the centrist caucus, adding her view that the coalition exists as a kind of “policy shop” of the House Democratic Caucus. “Most of the policies have their fingerprints on them and have gone through people who are part of the New Dem coalition.”

In large part, Strickland credits her policy credentials for influencing voters to send her to Washington.

“I just think that having served as mayor for eight years, and my message of focusing on economic recovery and demonstrating that I was not just about slogans but about actually doing the work, is what resonated with more voters in my district.”