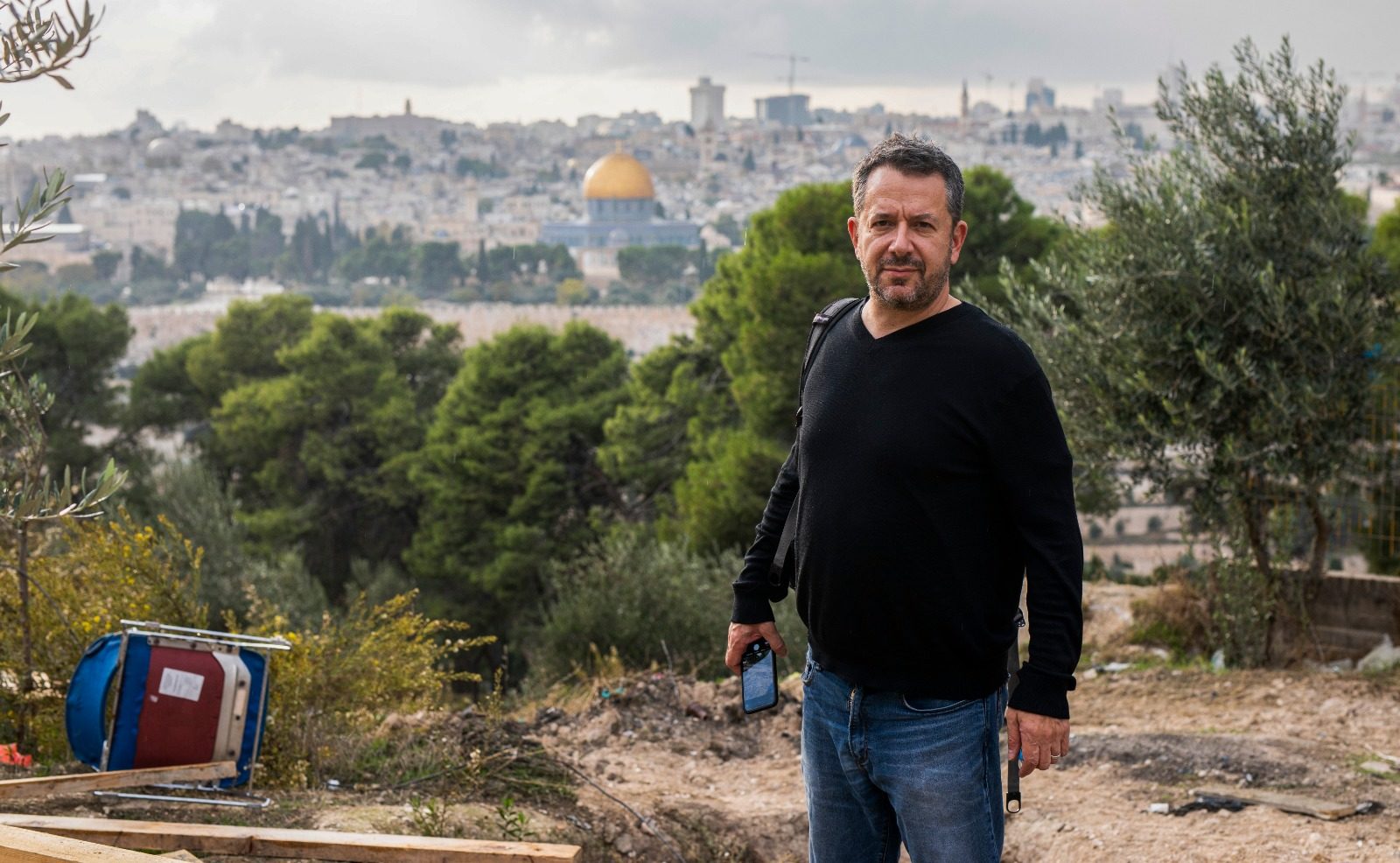 ‘This is hands down the most amazing, rewarding, three and a half years… it was easily the highlight of my career’

When David Halbfinger arrived in Israel in August 2017 as the new Jerusalem bureau chief for The New York Times, it was the realization of a dream he first pursued in 2003.

“I got pretty close to it at the time… but the moment slipped through my fingers,” recalled Halbfinger of his first shot at what has been called “the most sensitive job in journalism.” But 15 years later, the opportunity presented itself again, and after a brief deliberation, he packed up his life and transplanted his wife and three kids to Jerusalem in the span of just a few weeks.

“When I was looking to get this job in 2003, it was a dream job but… it just seemed like it was a mountain to climb,” Halbfinger told Jewish Insider from New Jersey, a day after arriving back in the United States following three and a half years in the job. “As a Jewish American, it of course had a lot of resonance for me. And I knew that intuitively it was hard and it seemed like the ultimate journalistic challenge, and I kind of was dying for that chance. But what I didn’t know was how enriching in so many different ways it would be.”

Halbfinger, who will be replaced by veteran foreign correspondent Patrick Kingsley, said the job was “challenging, grueling at times and exhausting all the time,” but richly rewarding.

“We had this huge emotional investment as a family, but we got enormous rewards from it,” he said. “This is hands down the most amazing, rewarding, three and a half years… for me, it was easily the highlight of my career.”

The veteran New York Times reporter admits that when he first arrived in Jerusalem, he was not particularly prepared for the gig, in part due to the accelerated timetable of his departure. “I had ordered like a dozen books right away, but I cracked the first one on the plane over.”

But he was amply prepared for the level of criticism he knew would come his way, and the “thick skin” he would need to adopt. “That was the one thing I didn’t need to be told.”

“There’s a very large number of very vitriolic people,” he said of many regular commenters on his work, including those who were “calling me a self-hating Jew, and somebody is calling me a Zionist imperialist pig, an antisemite — on the same story.”

But it was important for him to also place that in context. “I think until the Trump era, the Jerusalem job probably took the worst incoming,” he said. “But I wouldn’t dream of suggesting that I had it any worse than Maggie Haberman or others in our Washington operation.”

On occasion, though, the backlash still took him by surprise, and never more so than with a May 2020 story — and matching tweet — about the IDF’s COVID-19 operations, that began: “The Israeli Defense Ministry’s research-and-development arm is best known for pioneering cutting-edge ways to kill people and blow things up.”

“I knew when I was writing it that there would be people who would object to it,” said Halbfinger, but he defended the opener as a “perfectly innocuous and commonsensical way to draw your readers into something that is unaccustomed. This is not something they were accustomed to doing.” He also noted that the wording echoed similar comments made by Israeli reporter Ilana Dayan in a March interview with a Mossad operative tasked with tackling COVID-19. (Dayan said: “I know I’m saying something cliché and banal, but I was thinking that normally you’re scheming in order to take lives sometimes — sometimes. And now you’re scheming to save lives.”)

But when it comes to regrets, Halbfinger said he doesn’t spend too much time thinking about errors or the occasional correction.

“I had my share of corrections, for sure,” he said, “but I’m the kind of person who — my survival mechanism is not to dwell on those things.”

He does regret, however, that the final year of his posting was heavily constrained by the COVID-19 pandemic.

“It really just decimated stories,” he said, including a planned followup to an early March article about Israel’s strained health, education and transportation infrastructures. “I haven’t been able to roam free and do the close-up, carefree reporting I would have liked all over the country,” he noted, pointing out that he was also unable to enter Gaza for an extended period.

The same restrictions also curbed the social lives of his family. Halbfinger said he and his wife, Kimberly Brown, made the decision to place their three children in Israeli schools rather than international schools, “and that became a really difficult challenge, an emotional trauma for them and for us.” His two younger children, he said, emerged largely fluent in Hebrew, while his oldest daughter “became socially rooted in Jerusalem in an amazing way,” bringing together her friends who were Palestinians from east Jerusalem with religious Israelis from the Bnei Akiva youth group. But with their adventures largely hampered by the COVID-19 pandemic in the final year of their posting, “it was very wistful” to depart. “We all felt robbed.”

While COVID-19 overshadowed much of his last year in the job, in some ways, Halbfinger felt that his three-and-half-year tenure provided him with a wide mandate.

“It was busy, but we didn’t have a war to deal with that was like, all consuming,” he said. “We had major stuff happening, but we had a lot of room to either do enterprise [reporting], or to really try to get out in front of the news in an interpretive and analytical way.”

Halbfinger pointed to two stories that he was distinctly proud to have produced. One is a December 2018 in-depth exploration of the death of Rouzan al-Najjar, a 20-year-old Palestinian medic killed in Gaza, which won an award from the Overseas Press Club of America.

“We did something that nobody had done, we took crowdsourced images of this very chaotic scene, and we were able to gather the imagery from like 100 different smartphones and wire service photographers and so on,” he said, “and put them together into this three-dimensional recreation, in which we were able to basically chart the trajectory of a single bullet in the middle of all that fog of war.”

A second story that stands out, he said, is a July 2020 article written with Adam Rasgon and Mohammed Najib about Palestinian security officers, who are the subject of scorn among Palestinians for their cooperation with Israeli forces and treated with disdain by their Israeli counterparts.

“I always felt the most poignant story on the Palestinian side in the runup to annexation was of these security forces,” he said. “These are guys who are constantly vilified as traitors because they cooperate with Israel… These guys were really despondent, and we were able to get to them and hear their stories and bring out exactly what that experience had meant to them all that time.”

But if there was one overarching narrative that drove his time in the job, Halbfinger said, it was the same one that dominated much of world news over the past four years.

With one eye constantly on the news back home, Halbfinger said, “it was striking how this was the only foreign policy playground where the Trump administration was really effective.”

That made it fitting, in some ways, for the final story he published before departing Israel to be a buzzed-about in-depth exit interview with former U.S. Ambassador to Israel David Friedman.

“It was a good bookend,” he noted. “I had an interesting relationship with him.”

And while he joked that Israel’s upcoming fourth election in two years was not enough of an inducement to stick around, Halbfinger said he will be closely monitoring the news even now that he is back in the U.S. — with his next assignment still undetermined.

“I don’t think I’ll ever read the coverage the same way again,” he said. “I’ll be following it closely.”

While the Times covered the second and third Israeli elections in a more thematic manner, Halbfinger said it was fascinating to witness the political turmoil firsthand.

“I found it to be a really interesting period,” he reflected. “It’s sort of like Israel is this ship that’s run aground. And you can kind of feel the shudders of the hull as it’s trying to change direction, or not… You can feel the engine straining in one direction — it’s a really fascinating moment.”