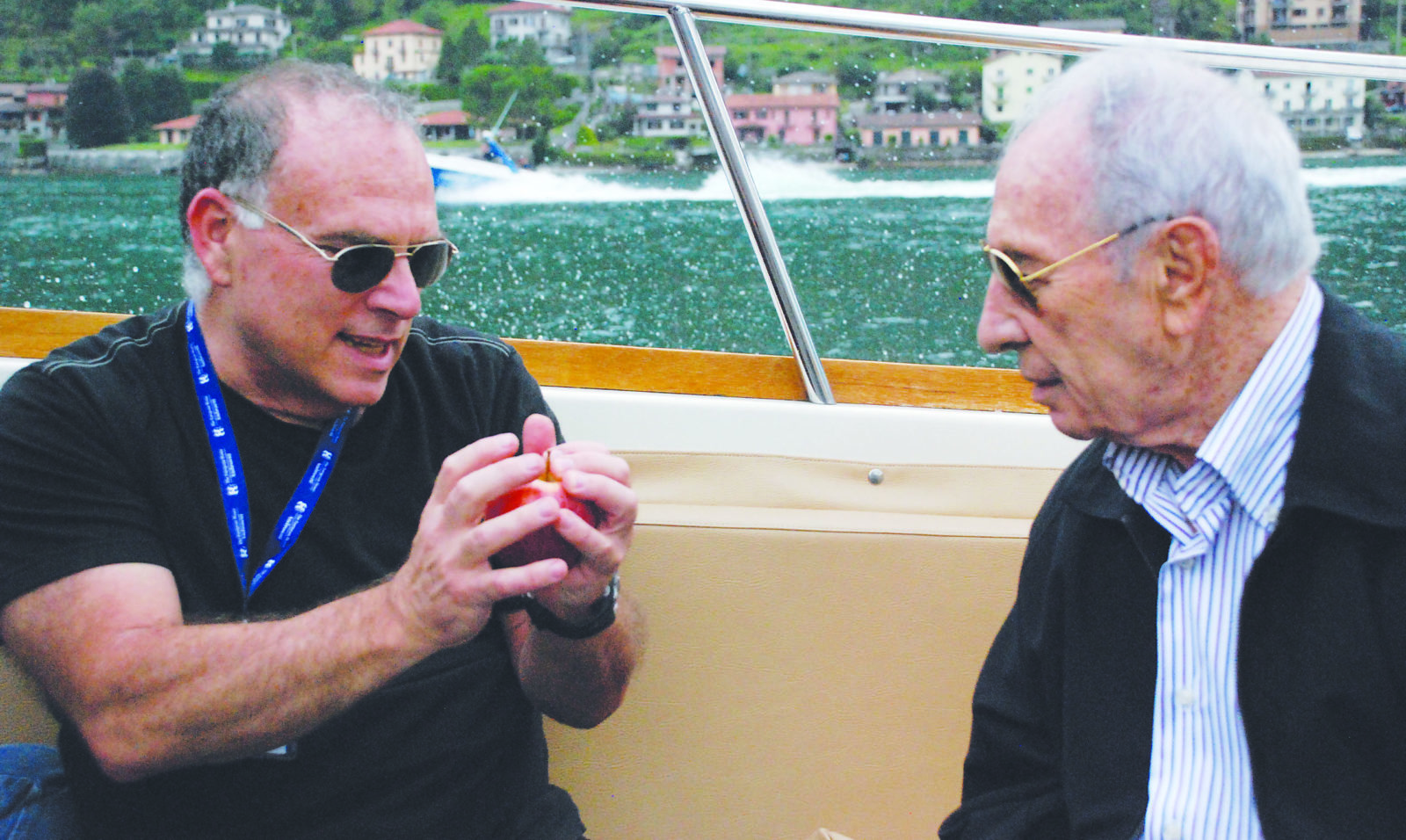 The hidden side of Shimon Peres

In a new book, Avi Gil, a longtime aide to the late Israeli president, pulls back the curtain on the secrets and drama he witnessed over multiple decades

For more than 25 years, Avi Gil was an aide, confidant, advisor and friend to Shimon Peres. From Peres’s time as finance minister in the late 1980s through his roles as foreign minister, prime minister, founder of the Peres Center for Peace, a second stint as foreign minister and his eventual election as president in 2007, Gil was a constant, behind-the-scenes presence in the elder statesman’s life.

While Gil, 65, remained largely in Peres’s shadow throughout his career, two years following the former president’s death, Gil published a remarkably candid portrait of his time in formal and informal government service, now translated into English by Eylon Levy as Shimon Peres: An Insider’s Account of the Man and the Struggle for a New Middle East.

“I didn’t feel it was right to write the book before he was gone,” Gil told Jewish Insider in a phone interview this week from his home in Tel Aviv, noting that Peres repeatedly pushed him to write his memoirs. And even when Gil pointed out that Peres would not necessarily be flattered by his account, “he said ‘you should write the truth, I have no problem with the truth.’ That was his reaction, and I was quite surprised, because it’s not typical to the average politician.”

The book, based on Gil’s diaries, notes and memories of several decades in political life, paints a humanizing and often unflattering portrait of one of Israel’s most prominent and enduring politicians.

He is blunt about Peres’s consistent role as “a supporting actor who aspired to a leading role” in Israeli government, repeatedly losing elections and having to fight for his dreams and ambitions from the sidelines. Gil details the deep enmity between Peres and Israeli Prime Minister Yitzhak Rabin, who could never quite put their rivalry to rest even when they were reluctant partners.

“We maintained strict discipline regarding Rabin for the sake of industrial peace,” Gil wrote. “We refrained from publicizing the disagreements between Peres and Rabin, and we did not fan media attention with stories of the friction between them.”

Gil, who is currently a senior fellow at the Jewish People Policy Institute, also admits to Peres’s pettiness and desperation for attention, noting “his inability to be magnanimous toward his own staff and his voracious appetite for credit.” He details dirty political machinations and backstabbing, as well as media manipulation including lying to the press, leaking damaging information and planting fake stories.

Looking back, Gil said he regrets some of the dirtier political behavior in which he engaged. “There is a toxic impact of being in such a position,” he told JI. “You have all sorts of illusions about your wisdom and your impact — and over time you learn to adjust yourself to reality. Definitely there are things that I would not repeat.”

Gil began working with Peres in 1988, when Peres was the foreign minister under a power-sharing national-unity government between Labor and Likud’s Yitzhak Shamir. But Gil said there is little to be drawn from that arrangement that can apply to the current fractured coalition between Prime Minister Benjamin Netanyahu and Defense Minister Benny Gantz.

“What we are seeing today is almost without comparison to the unity government that we had many years ago,” he told JI. “Although there was a feeling of enmity between [Peres and Shamir], still there was a sense of loyalty to the common cause, and there were some unwritten rules which were clear that no one was going to trespass.”

In the book, Gil shares numerous intriguing behind-the scenes anecdotes from his time and travels with Peres. The book includes mentions of when the 70-year-old Peres went dancing at a nightclub in Paris until 3 a.m. after a day of negotiating with the Palestinians, and when Peres introduced Palestinian advisor Nabil Shaath to Hollywood producer Arnon Milchan, during which the then-foreign minister attempted to convince Milchan to create a “Free Willy”-style film about a camel who inspired Middle Eastern peace.

Gil also revealed how, when Peres was president and Netanyahu was prime minister, Netanyahu blamed Peres — with some justification — for providing President Barack Obama with the idea of calling for negotiations based on the 1967 borders.

“Peres told me that Netanyahu had called him in a fury, suspecting that Obama’s move was coming from things the Americans had heard from us,” Gil recounted in his book. “He asked Peres to call the Americans and implore them to keep the question of the 1967 lines for a conversation between him and President Obama… But Peres did not walk back on his letter.”

Much of the book details the intensive undercover negotiations Peres conducted that led to both the 1993 Oslo Accords and the 1994 peace treaty Israel signed with Jordan — including the disguises Peres and Gil donned to slip across the border into Amman.

“Peres would have been the first to congratulate Netanyahu on these peace agreements,” Gil said. “But in the same breath, he would warn that we must not delude ourselves that the division of land between us and the Palestinians continues to be the indispensable condition for peace.”

While the Oslo Accords are widely viewed as a failure in Israel today, Gil is clear in the book, and in conversation, that he continues to believe the agreement is a fundamental building block toward peace — and that it will be vindicated by history.

“I’m not blind to the deficiencies of Oslo,” Gil told JI. “However I believe that Oslo is a tremendously important breakthrough point, because this is the time where Israelis and Palestinians recognized each other as nations… the mutual recognition between Israel and the Palestinians, this is something of historical importance, and in my view it will ultimately lead to the division of the territory between the Mediterranean and the Jordan River, and it will enable Israel to sustain its characteristics as a Jewish and democratic state.”

Gil was close with Saeb Erekat, the longtime Palestinian negotiator who died of COVID-19 last month. He said the pair met several times this year, and even exchanged messages following Erekat’s diagnosis.

“For me it was a big loss,” he said, suggesting that Erekat was a misunderstood figure among Israelis. Gil recounted a story of a seminar in Jordan, during which Iranian officials were calling for the end of Israel, “and Erekat stood up, openly, and he said, ‘you, the Iranian people, instead of preaching to erase Israel from the map, you should preach for establishing a Palestinian independent state next to Israel, and that both countries would live in peace together.’ He was quite a brave guy.”

Gil said if and when peace negotiations resume, the Palestinians “will feel his loss in a major way.” But he is not particularly hopeful about talks picking up in the immediate future.

“At this stage, the parties… are not very ripe for successful negotiations,” he said. “Each side has its own problems… the bottom line is, in my estimation, the most important figure who could do things in that regard is the American president. However, he has many other things on his plate,” Gil added. “Joe Biden, he is the player that can make a difference in my view, but I’m not sure that our situation is his priority.”