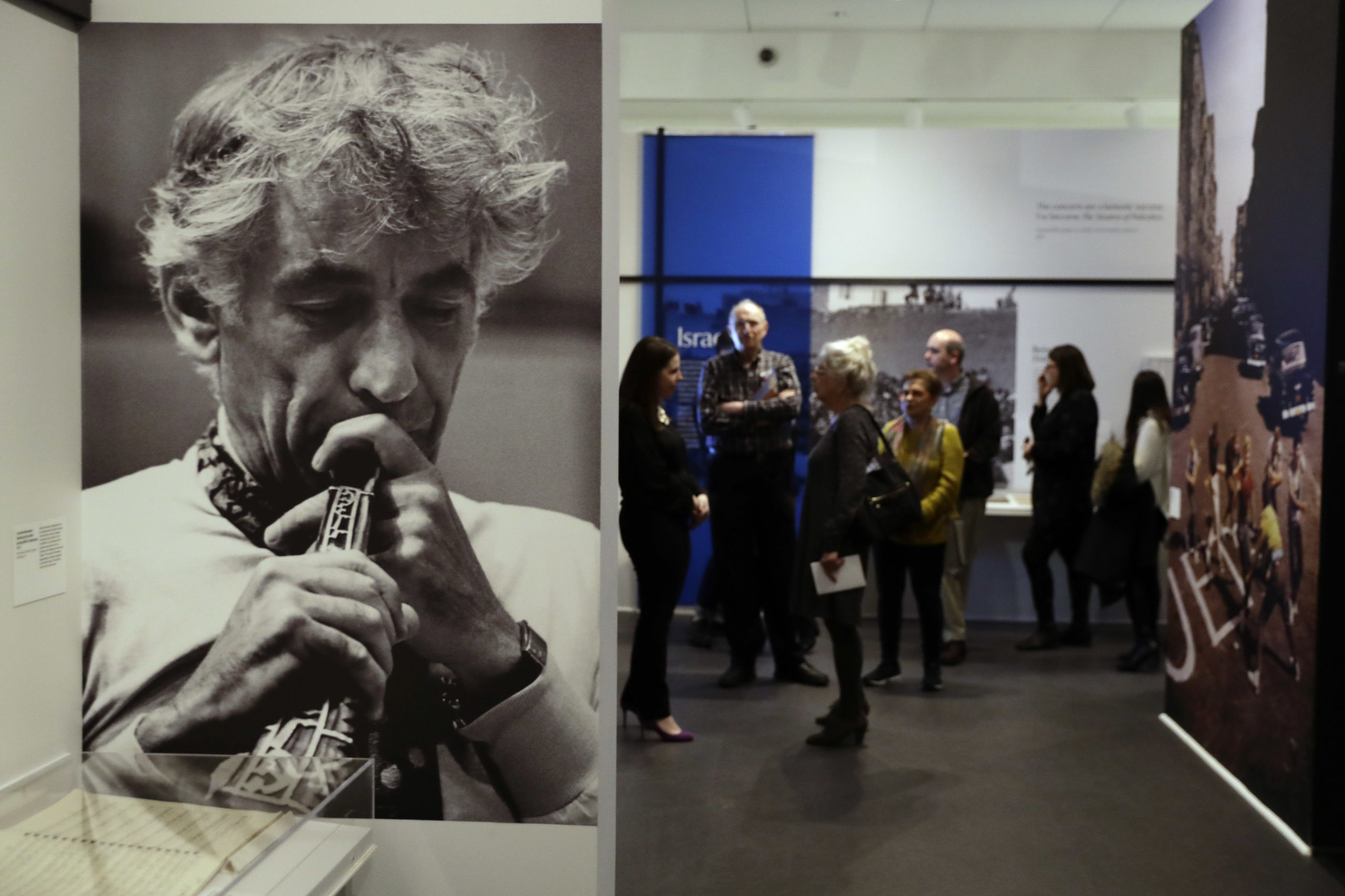 Will magic save the National Museum of American Jewish History?

Two important things are happening at the National Museum of American Jewish History in Philadelphia this month, both of which, if successful, will require a disappearing act. Magician David Copperfield will perform sleights of hand at an online event celebrating his and Harry Houdini’s induction into the museum’s Hall of Fame. And just a few days later, the museum’s last scheduled bankruptcy hearing will take place.

Museum leadership is hoping that the judge in the U.S. Bankruptcy Court for the Eastern District of Pennsylvania will discharge about $20 million of the $30 million in debt it owes to Bridgehampton National Bank and a dozen bond holders, including several members of the museum’s board of trustees, each of whom invested $1.2 million. Another half million dollars, museum leaders say, is owed to unsecured creditors, including the companies that provide security and cleaning services to the museum.

Until the museum filed for bankruptcy — two weeks before the first pandemic restrictions forced it to close its doors — 20% of its operating budget was being spent on servicing its debt, confirmed Misha Galperin, the museum’s CEO. Because it filed for bankruptcy before the start of the government-mandated shutdown, the museum did not qualify for federal relief funds that would have enabled it to keep paying its staff, two-thirds of whom were laid off in the spring.

If the museum is relieved of two-thirds of its debt, leaders are hopeful it will be able to emerge from Chapter 11 bankruptcy, which would allow the non-profit an opportunity to establish the firm financial footing it has sought since before 2007, when it broke ground on its current building, located on Philadelphia’s Independence Mall just across the plaza from the Liberty Bell.

“We should be able to exit bankruptcy around the end of the year or early next year, and it would be with significantly less debt than we have now,” Philip Darivoff, chairman of the museum’s board of trustees, told Jewish Insider. “People in the inner circle, as well as a number of philanthropists, [say] that when the debt is at a level [they will be] more confident in our future.” Darivoff told JI that he personally contributed $1.2 million to the museum’s bond issue.

But it will take more than a judge — or a magician — waving a wand over the museum’s debts, acknowledged one leader, to put the museum in the black. “David Copperfield won’t make our debt disappear,” said Galperin.

Galperin was hired as interim CEO last year to dig the museum out of its financial straits, and has since been named CEO, though he works in that role part-time.

The NMAJH accrued significant debt almost from the time it started building. The museum itself was founded in 1976 at nearby Congregation Mikveh Israel, and initially planned to expand into a new building on synagogue property. Those plans were scrapped when a CBS radio building went up for sale on Philadelphia’s Independence Mall.

Museum leaders, then headed by the late George Ross, who was a Goldman Sachs partner, bought it for just under $10 million, demolishing it to make way for a new building designed by architect James Polshek. The museum has 100,000 square feet of floor space over six stories, and construction costs ended up surpassing $150 million.

“It ended up being more expensive than we originally planned,” Darivoff told JI.

From the start, raising money was an uphill battle. The executive director at that time, Gwen Goodman, is quoted in Ross’s New York Times obituary saying that potential donors saw no need for the museum, given the number of existing museums containing Jewish art and artifacts in other major U.S. cities. Ross died in 2011, nine months after the museum opened its doors. He was also a mentor to Darivoff, who got involved with the museum 13 years ago at Ross’s request.

“I had hoped to get the money I invested in the bonds back with interest,” said Darivoff, who is a chairman of Vibrant Capital, a New York City firm specializing in structured credit. “It hasn’t turned out as I had hoped. I am prioritizing not just the viability of the museum, but for the museum to have a flourishing future. I hope through this bankruptcy that we come to a solution that provides for that flourishing future.”

Initially there was a bank construction loan of $150 million, said Darivoff. Above that, museum leaders “raised enough money to pay for the whole building, all of the exhibits, the design and the materials. The plan was to continue on that significant capital raising effort to build an endowment that would support the operations of the museum,” according to Daviroff.

Much of the initial loan was paid off through large gifts, including one from Steven Spielberg’s Righteous Persons Foundation, which donated $1 million in 2008. Other major donors included Sidney Kimmel, founder of Jones Apparel Group (now Nine West Holdings) and namesake of Philadelphia’s Kimmel Center for the Performing Arts, the Eli and Edythe Broad Foundation and the Michael & Susan Dell Foundation.

The balance was refinanced through Bridgehampton National Bank, to which the museum owes $16 million, and by raising another $14 million through the bond issue.

“We haven’t yet been able to raise the endowment to support the museum’s operations,” said Darivoff. “The museum has had a challenge in its first few years raising the annual funds to pay the annual operating costs, plus debt service.”

From the beginning, operations, as well as construction, cost more than had been budgeted, and money meant to pay down the construction debt instead went to cover those costs, he said. “It is a common problem with most museums,” Darivoff said. “The operations and annual fundraising of the museum is not sufficient to pay for the entire cost of the museum. The difference is typically provided by endowments which produce annual income to support the operations, and many are supported by federal, state and local governments.”

On top of that, “we were just coming out of the great financial recession [of 2008] when we opened. It wasn’t the best environment for raising funds.”

Philadelphia’s Independence Mall lacks the level of tourism that Washington’s National Mall enjoys. Federal museums in Washington, from the Smithsonian to the U.S. Holocaust Memorial Museum, are largely subsidized by taxpayer funding, and admission is free. That isn’t true of the museums in Philadelphia.

When the museum was being developed, Jane Eisner worked as vice president for national programs and initiatives at Philadelphia’s National Constitution Center, also located on Independence Mall. She subsequently worked as editor in chief of The Forward and currently serves as director of academic affairs at Columbia University’s journalism school.

“Working at the Constitution Center gave me new appreciation for how difficult it is to draw people to a museum time and again when you have to charge them money,” Eisner said. “The Philadelphia museums faced a really big challenge. It was a concern at the Constitution Center, particularly when you have the challenge of bringing in new exhibits that will bring repeat visitors.”

Eisner added that, “when you have a history museum about an idea, it’s a lot harder to find the right kinds of exhibits. It’s not the same as creating a Picasso exhibit. I can understand what the Jewish museum was up against from the get-go.”

Jonathan Tobin, who was the executive editor of Philadelphia’s Jewish Exponent when the museum was being planned and is now editor-in-chief of the Jewish News Syndicate, was critical of the endeavor from the start.

“The museum’s plight is an object lesson on the misapplication of scarce Jewish resources and how the vanity of big givers can lead to colossal mistakes for which the community must pay,” Tobin wrote in a March 2020 column soon after the museum filed for Chapter 11.

Museum leaders’ ambitions “outran even the prolific amount of funds raised as the costs of fulfilling its architect’s vision and compiling an extensive collection rose,” Tobin wrote. “The scale of its expenses was still way out of proportion to the good that it could do.”

For his part, Darivoff looks forward to the museum emerging from bankruptcy and eventually reopening, so he can revisit his favorite object: George Washington’s 1790 letter to the Hebrew Congregation of Newport, Rhode Island, in which he promises religious freedom.

“The expression he uses is ‘No longer will we speak of tolerance as if the rights of one class of people is granted by another’ — a very powerful statement. At the time, the most open and liberal communities in the world had laws of toleration, where they would tolerate Jews to live among them. Washington is saying ‘No, this is not about our tolerating you. You are a citizen of this country. This is your home.’ Jews weren’t welcomed anywhere in that way at that time,” Darivoff said. “Every time I study it, it makes me well up with emotion.”