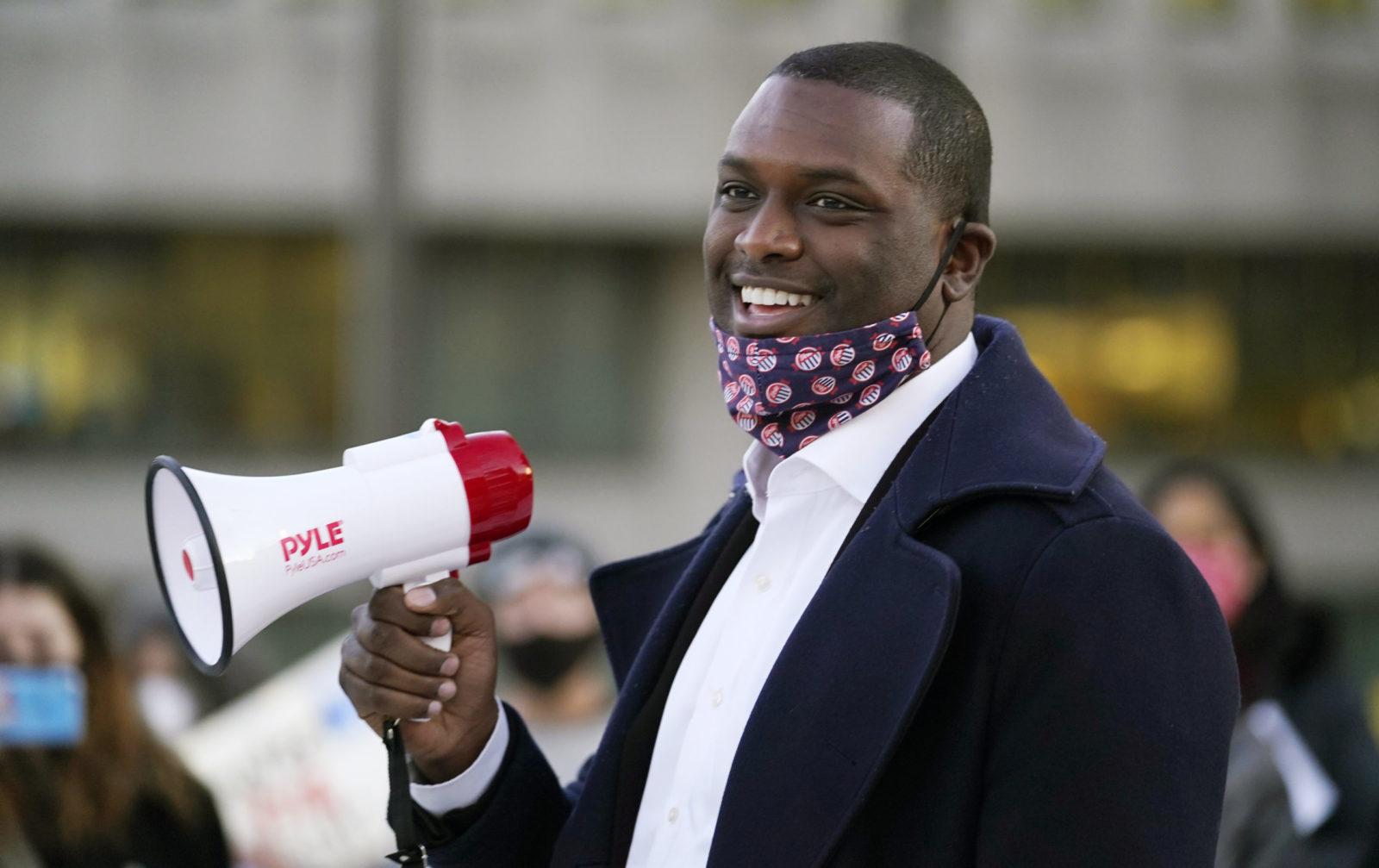 Mondaire Jones says he wants to bridge the ideological divide

After his unanimous selection as the freshman representative to House leadership, Jones says he is ready to work with all his fellow lawmakers

Mondaire Jones, the newly elected Democratic representative from Rockland County, has had a swift rise since he embarked last year on his longshot bid to dethrone Rep. Nita Lowey (D-NY) in New York’s 17th congressional district. When Lowey nullified his challenge by announcing her retirement, Jones capitalized on his early presence in the race, emerging from relative obscurity to fend off seven candidates in the crowded primary and going on to defeat his Republican opponent by double digits.

It was a remarkable outcome for the 33-year-old Democratic upstart, who had never run for public office but whose aptitude for grassroots campaigning served him well during the pandemic. Since arriving on the Hill for orientation, Jones, one of the first openly gay, Black men to serve in Congress, has only seen his profile increase. In a unanimous vote last month, he was named freshman representative to the House leadership, a position guaranteeing him an influential perch even before he is sworn in.

“It’s a big deal,” Jones marveled to Jewish Insider in a phone interview from Washington, D.C. on Wednesday, sounding somewhat awestruck at the notion that he had already ascended to the upper ranks of Congress. “I was just on a five-and-a-half-hour call yesterday for the Steering and Policy Committee.”

In his new role, Jones has been tasked with, among other things, making recommendations on committee assignments and chairmanships, while meeting on a weekly basis with members of the Democratic House leadership, including Speaker Nancy Pelosi (D-CA), Majority Leader Steny Hoyer (D-MD) and Majority Whip James Clyburn (D-SC).

Speaking with JI, Jones made clear that he respects his party elders, a quality that suggests he could serve as a kind of generational mediator at a moment when many of the party’s younger, more left-leaning members have found themselves at odds with the predominantly older House leadership. Jones affectionately described his still nascent relationship with Pelosi and Clyburn as though he were speaking about an aunt and uncle.

“Oh, I adore them,” he said, adding that he was encouraged by the overall support he has received from several of his colleagues in the House. “So many people have taken time out of their busy schedules to begin the process of mentoring me. I continue to receive phone calls from people for whom I have tremendous respect, just giving me advice, offering to connect my staff with their staff for purposes of being helpful in the transition. It’s just been a really, really wonderful, welcoming experience. It’s been perfect.”

His experience would seem to cut against the narrative that moderate and progressive Democrats are in conflict over messaging on such issues as defunding the police, a rift that appears to have deepened since the election.

“I think it’s overstated, and I don’t think that it will be a significant problem moving forward,” Jones told JI, offering his on-the-ground assessment. “Everyone wants to pass legislation in the best interest of the American people and are disappointed that so much media attention has been given to disagreement among a handful of folks on television.”

While Jones campaigned on progressive issues like Medicare for All and the Green New Deal, his political sensibility, at least, seems to veer to the moderate and perhaps more independent end. When asked if he identified with the coalition of progressive representatives dubbed “The Squad,” whose ranks have grown this cycle, Jones was reluctant to directly equate himself with the group. “I appreciate the question because other people have made assumptions,” he told JI, alluding to the scores of articles that have characterized him as an incoming Squad member.

“What I have always said in response to that question is that I’m going to Congress to be Mondaire Jones and to distinguish myself and to work with everybody,” Jones added, noting that he is interested in collaborating with a wide variety of representatives from both parties in an effort to deliver results for his constituents.

As an example, Jones said he was planning to work with Republican congressman-elect Andrew Garbarino of Long Island, whom he described as a friend, to restore the state and local tax deduction in New York. On other matters, Jones said, he will seek out “the most progressive members of the House of Representatives” for partnerships.

Jackie Shaw, executive director of the IFCA Housing Network in Ossining, a village in Jones’s district, said the congressman-elect’s approach was in keeping with her experiences conversing with him when he was a candidate. “He has a way of connecting with people and building bridges to work with others in a collaborative manner,” she told JI.

Still, Jones hasn’t shied away from conflict. Like many of his progressive colleagues in the House, Jones is vehemently opposed to the possibility that President-elect Joe Biden may pick Rahm Emanuel as his transportation secretary because of Emanuel’s controversial handling of a police shooting as mayor of Chicago. “Rahm Emanuel covered up the murder of a Black teenager, Laquan McDonald, while he was Mayor of Chicago,” Jones tweeted on November 20 amid reports of the appointment. “That he’s being considered for a cabinet position is completely outrageous and, honestly, very hurtful.”

“It is the president’s prerogative to make personnel decisions, and I have been very respectful of that,” Jones elaborated to JI. “I have only weighed in on the issue of Rahm Emanuel because I view that to be a red line and a major slap in the face to the Black community that elected Joe Biden to the White House. I’ve really wanted to be patient and respectful of that process, and to the extent that I have recommendations, to communicate those through private channels — and that’s, I think, what you’ll continue to see from me unless there are other red lines that I feel are on on the verge of being crossed.”

On the whole, Jones said he was looking forward to working with the incoming Biden administration. “I continue to believe that Joe Biden will be the most progressive president in United States history,” he said. “Biden is showing that he’s prepared to meet the moment,” Jones added, praising his selection of Ron Klain as chief of staff. “I would love to see greater racial diversity in his cabinet appointments, and so I’m waiting to see what he does with respect to the attorney general decision and other cabinet-level decisions.”

As he prepares to take office, Jones has been working closely with Lowey, whose legacy he says he admires and whose counsel he appreciates. “She’s delightful,” he said. “She and her staff have been very helpful in the transition process.”

In an email to JI, Lowey said she was “proud to support Mondaire” and that he “has proven his enthusiasm for and dedication to solving the most urgent problems our communities face.”

Jones offered a concise list of goals he hopes to accomplish in his first term. “Number one is COVID-19-related,” he said, emphasizing the urgency of securing relief funding that would extend supplemental unemployment insurance benefits. “We also have to press forward on democracy reforms,” he said, such as enacting automatic voter registration and replacing “partisan gerrymandering” with independent redistricting commissions.

“It is unfortunate that you can be a QAnon adherent and safely coast to victory in the general election after coming out of your primary,” Jones said, referring to Congresswoman-elect Marjorie Taylor Greene, whose Democratic opponent dropped out of the race weeks before the election. “There’s nothing normal about that.”

Jones represents a district that is home to the largest Jewish population per capita of any county in the U.S., and he plans to visit Israel during his first term — if it is safe and possible to do so — as part of an effort to better understand the concerns of some of his constituents. In previous interviews with JI, he has positioned himself as a strong advocate of the Jewish state, rejecting the Boycott, Divestment and Sanctions movement while supporting a two-state solution to the Israeli-Palestinian conflict.

Elliot Forchheimer, executive director of the Westchester Jewish Council, said he has had productive conversations with Jones and that he looks forward to working with him when he assumes office. “He has a good understanding, I think, of the place of Israel as the democratic ally of the United States,” Forchheimer told JI, adding that Jones was well attuned to his constituents’ needs because of his connection to the district.

“It’s important to remember,” Forchheimer said, “that Mondaire Jones is new in his role as a congressman-elect, but he’s not new or unfamiliar with Westchester.”

Jones was raised by a single mother in nearby Rockland County, the entirety of which he also represents. A graduate of Harvard Law School, he worked as a fellow in the Justice Department during the Obama administration and, after a stint in a New York law firm, returned to his home district where he was an attorney for Westchester County’s Law Department, helping to address an uptick in acts of antisemitism and racism in the region while serving as a legal advisor to the Human Rights Commission.

His devotion to local matters appears to have paid off in his quest for a congressional seat. Though absentee ballots in Westchester have still not yet been counted, Jones was energized by the fact that his race was called shortly after Election Day while other contests in New York were held up for weeks because of the close vote tallies. “It was a significant victory,” Jones said, adding that he defeated his opponent by 13 points in his home county — a point of pride for the congressman-elect, who hopes his vision will appeal to voters across party lines.

“I’m just really proud to have gotten Republican support in Rockland County,” he said, “and to be bridging these ideological divides.”