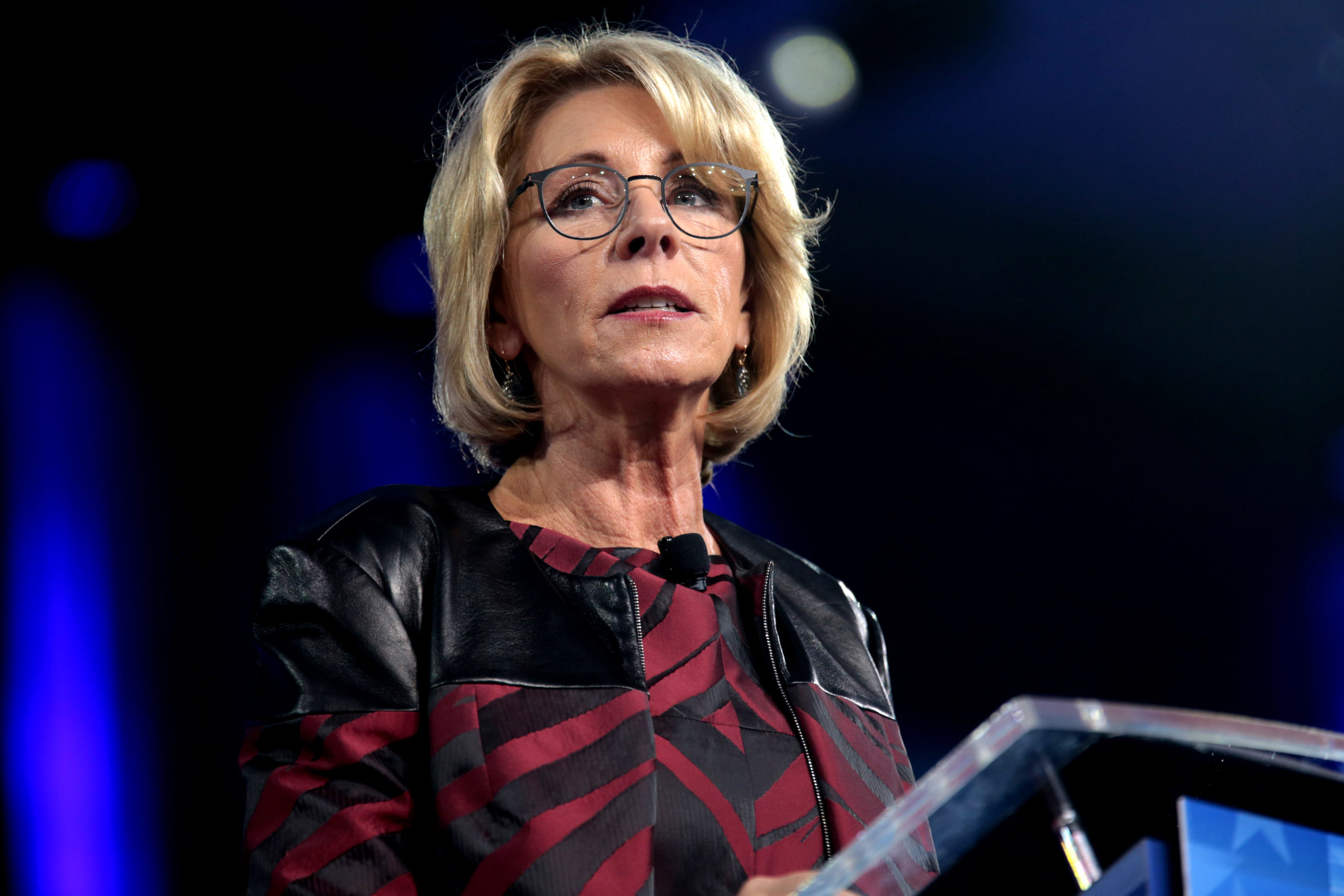 Over the past four years, Secretary of Education Betsy DeVos found support among some in the Jewish community for her department’s aggressive approach to tackling antisemitism on college campuses and her advocacy of government funding for non-public elementary and secondary schools.

But former Department of Education officials who served under DeVos relayed to Jewish Insider how the administration was often divided on issues of interest to the Jewish community.

In December 2019, in an effort to address rising antisemitism on college campuses, the administration issued an executive order including antisemitism on a list of forms of discrimination addressed in the Civil Rights Act of 1964.

The administration was split over tackling antisemitism on campuses, according to Ken Marcus, who served as the assistant secretary of education for civil rights from 2018 until earlier this year.

Since the executive order was signed, there have been several complaints filed alleging university administrations did not adequately protect Jewish students or provide a campus environment free of discrimination, and there is at least one currently open investigation into antisemitic activity on a campus.

While serving in the George W. Bush administration in 2004, Marcus, then the deputy assistant secretary for enforcement at the DOE’s Office of Civil Rights, wrote that the department would protect students harassed due to their religion. Six years later, Russlynn Ali, who held Marcus’s role in the Obama administration, reaffirmed that guidance.

But according to Marcus, DeVos was initially opposed to adopting the International Holocaust Remembrance Alliance’s working definition of antisemitism within the department, ultimately a key part of the Trump administration’s executive order.

“Her reasoning was that the department did not adopt definitions of discrimination under Title VI. So at the beginning, that was the view that she had developed prior to my arrival at the department, and prior to the discussions with the White House,” Marcus said. “By the end of the administration, of course, President Trump had adopted the executive order and Secretary Betsy DeVos welcomed it and of course, under her leadership, it is being administered.”

Additionally, a Trump administration push to pass a federal tax credit program for contributions to scholarship organizations — a key plank of DeVos’s and the administration’s school choice push, which was a top priority for parochial schooling advocates — died in Congress.

Jason Botel, who served as a senior White House advisor for education and an acting assistant secretary education, among other roles, told Jewish Insider that DeVos’s efforts were undercut by a lack of support from the White House and from Trump.

“I just didn’t see the president weighing in all that much when it came to education issues of any kind,” Botel told JI.

Botel said the White House repeatedly failed to advocate strongly for the Education Freedom Scholarships and Opportunity Act and similar initiatives during the budget negotiating process with Congress.

“In spite of some of the rhetoric that we heard from President Trump when he was a candidate and even afterward, we just didn’t see… the White House really push for those things,” Botel said. “When the White House was really pushing the things that mattered most to it to get into a budget, that was not on there, it never really made it through. If it was a true priority, there’s a lot more that could have been done.”

“Under the leadership of Secretary DeVos, the Department of Education has advanced many of the president’s policy priorities for America’s students and families,” Deere said. “The president and his administration have been a tireless advocate for school choice and instrumental in implementing policies responsible for bettering the education and lives of children across the country.”

Marcus praised DeVos for working to implement a new set of questions to gauge the level of antisemitic activity in elementary and secondary schools within the Office of Civil Rights’s Civil Rights Data Collection program.

“It certainly was a tribute to Secretary Betsy DeVos that she accepted my recommendation that the department do this,” Marcus said. “There had been some within the department taking different views… but I’m pleased that Secretary DeVos has been strongly behind this.”

Marcus also highlighted the steps the department has taken under DeVos to investigate colleges’ Middle East studies programs, as well as foreign funding — particularly from Qatar — received by some American universities, and some schools’ failure to properly disclose the contributions. Marcus argued that such funding can shape the way Israel-related issues are taught on campuses.

“These [foreign funding] investigations under Secretary Betsy DeVos, with particular leadership from Deputy Secretary Mick Zais and acting General Counsel Reed Rubinstein, have been an eye-opener,” Marcus said. “And they’ve been the first of its kind within the history of the department.”

Marcus further praised DeVos as a fierce opponent of the Boycott, Divestment and Sanctions movement.

“DeVos was perhaps the first cabinet secretary to be very specific and explicit about the evils of BDS,” Marcus said, referring to a speech DeVos made last year at a Justice Department summit on antisemitism. “She said… BDS stands for antisemitism. That brought down the house. And she’s been very clear since then, that BDS is not just a political movement, it’s a form of bigotry. So I think that her thought leadership on this issue has been important.”

Marcus believes DeVos’s commitment to fighting BDS and other antisemitism is deeply rooted in her own beliefs.

“I think it starts with her own faith as a Christian and her belief in the importance of religious freedom. I think that she has a strong sense of justice and injustice,” he said. “And in her heart, I think that she is deeply concerned with what’s happening to Jewish Americans in colleges and universities.”

Although DeVos and the Trump administration failed to pass legislation advancing school choice initiatives — the most significant federal moves on school choice under Trump came in a July Supreme Court ruling — Jewish parochial schooling advocates nonetheless praised DeVos for elevating the issue in the national discourse.

“She clearly put school choice at the forefront of the education agenda in Washington and the policy debate that no previous secretary of education had,” said Nathan Diament, executive director of the Orthodox Union Advocacy Center. “The next time that Republicans return to power her legacy might be that it is more at the forefront of the next Republican president’s agenda.”

Rabbi A.D. Motzen, the national director of state relations for Agudath Israel of America, added that the administration’s work has helped advance school choice initiatives at the state level.

“Most school choice issues [are] really on the state level. The secretary and president and vice president have talked about this issue when they were in other states. And I think that has helped raise the issue on a state level,” Motzen said. “So I think that might have a lasting effect, no matter who is running the Department of Education or sits in the White House.”

“Even within the Republican Party, there is more support for school choice over the last few years,” he added,”because of the constant public education on this issue through the secretary’s comments and through the White House.”

Despite what they saw as progress on private schooling under the Trump administration, neither Diament nor Motzen were optimistic about further steps under the incoming Biden administration.

“The rumors are that [Biden’s secretary of education pick] is going to be somebody from the world of teachers unions, who are not traditionally supportive of school choice,” Diament said. “So in the relatively short term, if it plays out that way, there’s not going to be much of a school choice agenda in Washington.”

Biden officials have pledged that the president-elect will choose a former public school educator as his secretary of education, although they have not clarified whether they are considering individuals with backgrounds in higher education.

Motzen emphasized that significant steps can continue at the state level, even if the Biden administration de-emphasizes the issue.

On the issue of antisemitism, Brandeis Center President Alyza Lewin said she’s hopeful that progress will continue under the Biden administration, as it has among recent previous administrations. “Each administration builds on what came before it,” she explained.

Motzen characterized DeVos as a committed friend to the Jewish community, recounting a story from the 2018 White House Hanukkah party.

According to Motzen, DeVos was informed that a group of Holocaust survivors was sitting at the back of the room. DeVos spoke with the survivors and spoke to White House staff to ensure the group was moved to the front row of the event — a feat Motzen compared to dividing the Red Sea.

“She literally went down on her knees, held their hands, talked to them, listened to their stories,” she said. “And then she turned to me and said, ‘This is not right. Why are they all the way in the back?’”

At the event, DeVos also told the survivors that her great-aunt and uncle — who ran a bakery in the Netherlands — had saved Dutch Jews by hiding them in flour sacks. The department did not respond to a JI request for more details about this account.

“That’s the kind of thing that I have experienced with her,” Motzen said. “She listens. She’s a caring, compassionate person. She cares about kids. People have disagreements on her policies — OK, I get it. But she does not get enough credit for the person that she is, which I’ve known for many years.”