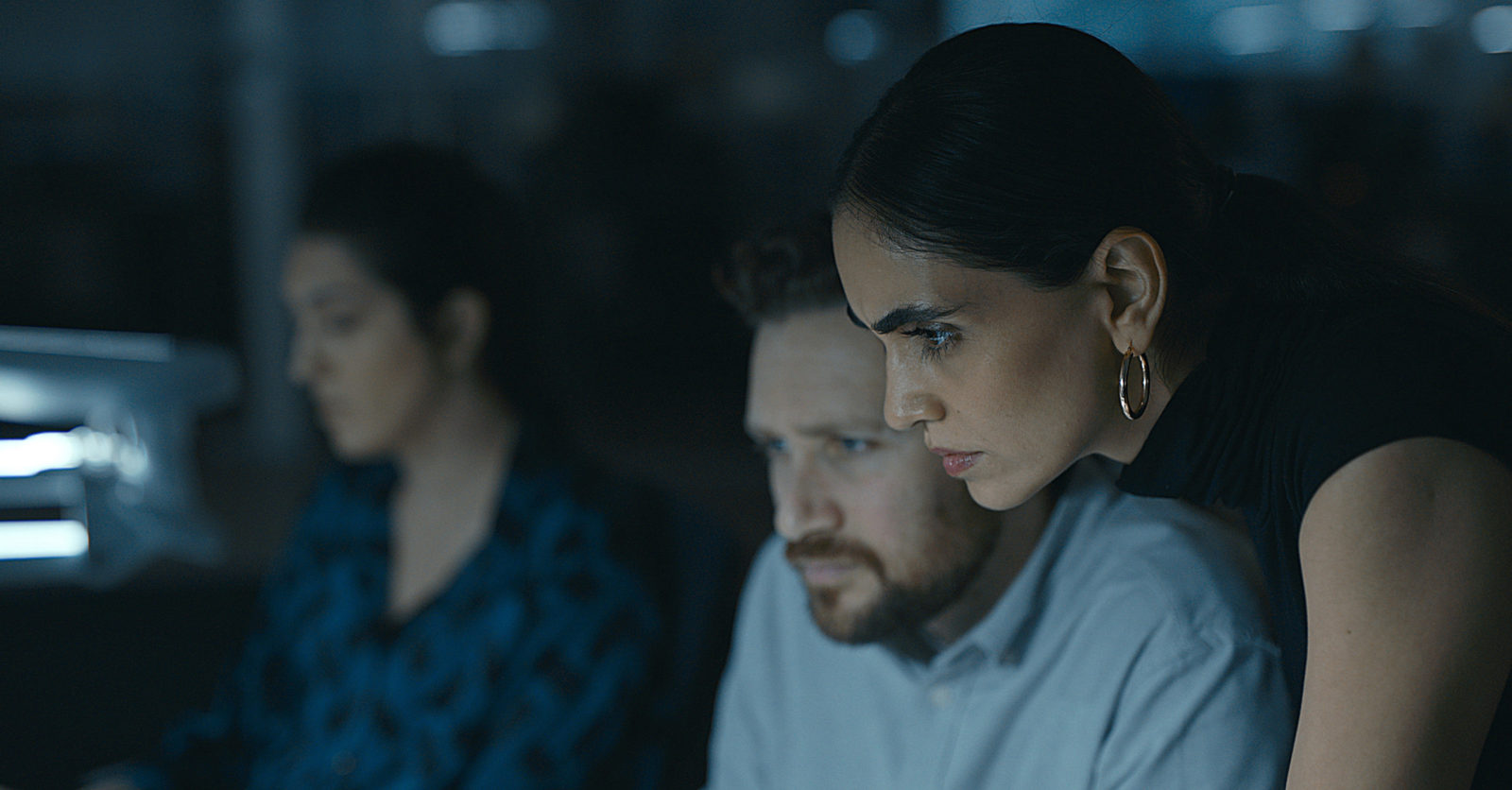 The ‘Tehran’ star bringing Israelis and Iranians together through music

Liraz Charhi dishes on hew new album, her role as a Mossad agent — and that shocking season finale

Liraz Charhi has long felt suspended between two worlds. The Israeli-born actress and singer grew up in a Farsi-speaking household with two Iranian-born parents, who raised her on stories of Tehran in a home imbued with Persian culture.

“Cultural-wise, I felt like I was growing up in a very, very cultural Iranian home,” said Charhi of her childhood in central Israel. “And it was pretty tough for me to understand at some point: Who am I? Am I Iranian or am I Israeli? Because each time I was walking from home to school, I felt like I’m switching countries.”

That dichotomy has played out in her work over the past year. In the new Apple TV+ thriller “Tehran,” Charhi, 42, plays Yael Kadosh, an Iranian immigrant to Israel who works as a Mossad handler, utilizing her fluent Farsi to build connections and operate undercover. And on her new album Zan, out next week, Charhi secretly collaborated with Iranian artists to create the record’s Farsi-language electro-dance tracks.

While her parents spoke to her in Farsi, Charhi said she always answered in Hebrew, something she regrets now and admits came from being embarrassed of her roots. But once she grew up, “I understood that my heritage is my story, and I don’t have to choose sides and to fight over my identity,” she said. “I’m built of layers — I’m both Iranian and Israeli and I don’t have to feel sorry about it. It’s a good thing, it’s not a bad thing.”

When she was cast in “Tehran” as Kadosh, Charhi thought her Farsi language skills would all come flooding back to her. “I can’t believe how naive I was,” she said. “I said, ‘Yes, it’s my language, my language from home.’” But when the Iranian expats all gathered on set, she said, “each one of us had different dialects. So we actually needed to build a new language for the TV series,” aided by multiple dialect coaches on set. “It was pretty tough,” she said. “It was very challenging, but it was so fun because we had great teachers.”

Charhi said she related strongly to the character of Kadosh, who also grew up caught in between two worlds. “She moved to Israel when she was 16, and she has pretty much the same story of my parents and myself,” she said. “She’s very complex, she’s very gentle, but at the same time very determined to prove herself in a very masculine world.” Like herself, Charhi said, Kadosh is “asking the question: Who is she? Is she Iranian or Israeli? I felt that this role was actually written for me. And I could identify with her story immediately.”

Spoiler alert: The following contains spoilers for the season finale of “Tehran.”

Charhi read through the season’s full script before shooting even began — so she knew how the character arc of Kadosh would play out. But she tried to prevent the agent’s final act of betrayal from influencing her portrayal throughout the season.

“It was pretty tough, challenging for me… I wanted the people to be surprised about my decisions,” Charhi told JI. “I chose a side at some point in the series. I chose one side, which is painful for the other side, and for myself as well. But as a spy and as an agent, I needed to do what I needed to do.”

The character, she said, was a complex one, whose decisions were not necessarily easy to understand.

“She had to choose a side at some point to protect her own life,” Charhi said. “I needed to tell Yael’s story and not to be afraid of what people will say. People here in Israel say ‘oh, you’re the betrayer, you betrayed Israel.’ Maybe Israel betrayed me on the way and I needed to do what I needed to do. They don’t know the whole story.”

Charhi said the finale of the show, which aired on Apple TV+ on Friday, was left intentionally vague to keep viewers in suspense. A second season of the show has not been officially confirmed by Apple, but industry insiders suggest a follow-up installment is in the works.

Charhi, a married mother of two who calls Tel Aviv home, has developed a varied and colorful career in TV, film, stage, music and voiceover work. Her aunt, Rita, is a famous Israeli singer who was born in Tehran and performs in Farsi — and represented Israel in the Eurovision in 1990.

Charhi had an early breakout role in the 2004 film “Turn Left at the End of the World,” which garnered her a prestigious Ophir Award nomination. Later, she appeared in the 2010 film “Fair Game,” starring Naomi Watts as unveiled CIA agent Valerie Plame, and in the 2012 film “A Late Quartet,” which stars Philip Seymour Hoffman and Christopher Walken.

For several years while pursuing a Hollywood career, Charhi said, she was spending significant amounts of time in Los Angeles — where, to her surprise, she discovered a vibrant Iranian expat community.

“Suddenly I am exploring beautiful neighborhoods with beautiful Iranian people that actually approached me to speak to me in Farsi,” she recounted. She discovered Persian music shops and lugged CDs back to Israel, delving into the music of Iranian female singers from the 1970s, pre-revolution — something she never encountered at home. “I felt the layers and the mix of cultures that got inside their music,” she said, “and I felt that I can identify with their stories because I am built from the same layers.”

That journey led her to record music in Farsi, first on her 2017 album Naz, and again on her latest album, Zan, which means “woman” and will be released on November 13. For Zan, Charhi digitally collaborated with a range of Iranian artists — an experience she said was fraught with tension.

“It was like a rollercoaster,” she told JI of working with the Iranian artists. “Some of them were really, really happy to work with me. But some of them disappeared in the middle, changed their profile, they were very afraid that someone would catch them and [discover] that they’re working with an Israeli artist, while some of them couldn’t care less.”

Charhi put out a call on social media for Iranian artists who were interested in contributing to the album. Many eagerly replied, sending lyrics, melodies and some even conducting joint recording sessions over Skype.

The experience was “challenging and painful. And it was a miracle. It has so many layers, you know, like our relationship. It’s complicated.” Charhi said that in the aftermath of America’s targeted killing of Iranian Gen. Qassim Soleimani — and the subsequent shooting down of a Ukrainian airliner by the Iranian Revolutionary Guard in Tehran — she lost touch with many of her collaborators.

“We lost connection with them for almost two weeks,” she said. “And it was crazy because I didn’t know if something happened to them, I didn’t know if the material is gone, and I was stressed and had anxiety and I had sleepless nights because I was very, very worried about them.”

Across social media, Charhi has received plenty of feedback on both her role in “Tehran” and her upcoming album — including the single, “Injah,” (“Here”) that dropped in September.

“I get messages from all over the world,” she said, including from Iranians who contact her on Facebook and Instagram with largely positive comments. “Maybe I got like two haters” amid a sea of positivity, she said. “They even love the fact that I don’t sound like a real Iranian, they love the little accent I have.”

Charhi said she hopes both her music and her acting career can help show how much average citizens of Israel and Iran have in common.

“We are complex countries and it’s a complex issue,” she said. “And I think the ‘Tehran’ TV series and my albums as well are telling the stories behind the big enemy countries. It’s a fact that we’re not living in peace. But you know, we — the simple people — we love each other, and we do live in peace. We are doing art together, which is the most beautiful thing we can do.”