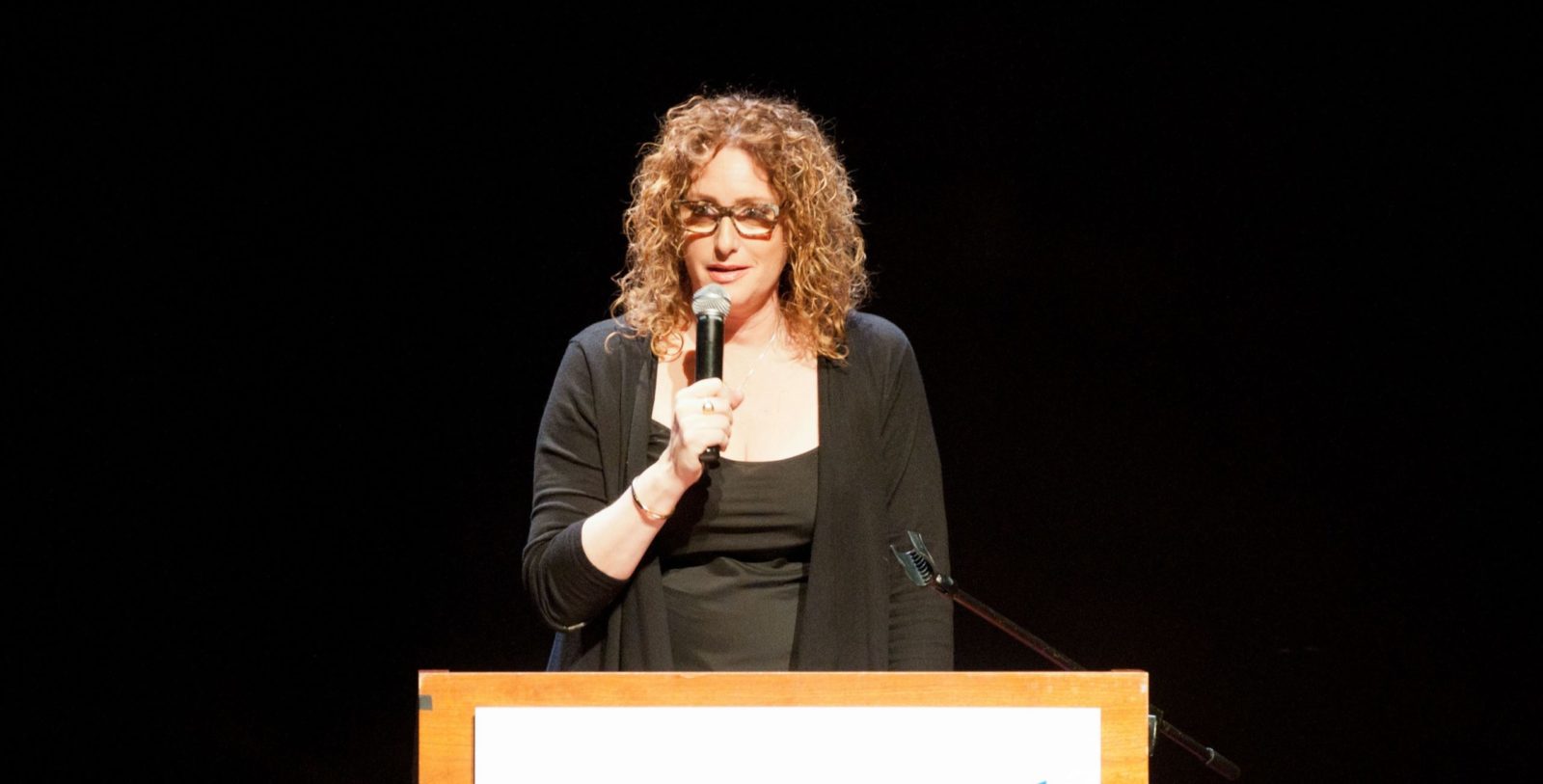 The outspoken Jewish comedian has penned a new book, ‘Yes I Can Say That,’ defending free speech in satire and stand-up

Judy Gold will not apologize.

She won’t apologize for being a 6’3” outspoken Jewish lesbian. She won’t say sorry for past jokes that have since been deemed offensive. She certainly isn’t apologetic for supporting friends and colleagues who have come under fire for their own questionable behavior. And she isn’t sorry for loving the State of Israel either.

There’s little that the veteran comedian and actress believes is out of bounds, in particular when it comes to stand-up comedy. And that’s partly why she jumped at an offer to write about comedy, free speech and censorship. That book, Yes, I Can Say That: When They Come for the Comedians, We Are All in Trouble, hits shelves today.

“When you try and shut down satire and silence comics, that’s really the end of free speech,” she told Jewish Insider in a recent interview from her home in Provincetown, Mass. “Free speech means free speech, especially when it’s comedy, and comedy is subjective.”

In her well-researched and often caustic book, Gold, 57, takes politically correct culture to task, decrying its chilling effect on free speech and criticizing the price some comedians have paid for past jokes. She recounts how, not too long ago, comedians like Lenny Bruce and George Carlin were arrested and fined for using obscenities in their stand-up acts.

The situation today, Gold claims, is dangerously close to that era.

“When we stop the discourse, when we say ‘well, we can’t talk about that anymore,’ that’s when we… become more ignorant,” she said. “It’s not like it doesn’t exist anymore if we don’t talk about it.”

In the book, Gold rails against terms like “microaggressions” — something she said she was subjected to from her mother daily — and “trigger” words — a phrase she claims is utilized “by delicate flowers who use it to describe words, actions, or events that cause them even the slightest bit of unpleasantness.”

“When you start telling people you can’t use that word and you can’t say that idea,” she told JI, “when people take comedians’ jokes out of context and don’t take into consideration a comedian’s intent — that’s when we all get into trouble.”

There are a few lines that Gold would never cross. She says she would never use the n-word, because “it’s not our word to use.” By the same token, she points out, there are jokes that she — as a Jewish, lesbian woman — can tell that she believes others should not.

“Can non-Jews talk about the Holocaust?” she asked. “I feel like you can talk about anything, but if better be f***king funny. It better be educated. You can’t discuss a topic like that — it cannot be frivolous. It has to be funny.”

In her book, Gold recounts jokes she has made about Hasidic men laundering money — “I think they are innocent, because those Hasidim don’t launder anything” — or Sen. Joe Lieberman’s failed 2000 vice presidential run amid the High Holidays — “the heat of the campaign is in the fall, which also happens to be Jew season. Can you imagine his answering machine message?” While she received some pushback over the years, Gold said she isn’t particularly moved by the negative responses.

“We’re all products of our history, and stereotypes — earned or not — are part of our legacy,” she writes. Comedy, she notes, is practically designed to offend, and walking into a stand-up act and then getting offended is “your choice.”

While Gold has never faced the kind of career-ending backlash that many of her colleagues have, she is defensive of — most of — her friends who have. That includes Kevin Hart, who stepped down from hosting the Academy Awards after his past homophobic tweets resurfaced.

“He addressed it and he apologized,” Gold said. “I know him, he’s a nice guy. Why are [comedians] held to a higher standard? Why is it never enough?”

In one chapter, Gold compares the behavior of Louis C.K., who was accused of multiple counts of sexual misconduct, with Bill Cosby, who is imprisoned for three counts of aggravated indecent assault.

“Louis didn’t do anything considered criminal, and yet people are saying ‘oh he shouldn’t be able to perform,’” Gold told JI. “But that’s what he does, that’s his art… if you hate him because of who he is and what he did, then don’t go see him.” Gold said C.K.’s behavior was “uncalled for and kind of sick,” but she doesn’t believe it should end his career.

Forgiveness, she writes, appears to be in short supply these days.

“Comedy is a democracy, a working democracy, where character matters,” Gold wrote. “Banishing comedians means depriving us of laughter that heals, educates, and connects us. Banish wisely.”

Gold has also been watching over the past weeks and months as high-profile celebrities and athletes have become engulfed in antisemitism controversies. And she’s not too surprised.

“Growing up, my mother was constantly talking about how everyone hates the Jews,” she said. When she was younger, Gold said she always assumed her mother was overreacting. But not anymore. “She was right! We are blamed for everything. It’s been going on for thousands of years… and it’s here to stay.”

“We’re not perfect, but no one is,” she added. “If you hate us so much, then live in this world without the contributions that we have made, and see how you like it.”

Gold predicted that Israel would be the first to develop a COVID-19 vaccine and “save everyone” — but it wouldn’t change much.

“We could get the vaccine for corona and save everyone’s life and they’ll still hate us,” she said.

Gold is, if you haven’t yet guessed, outspoken on the issues that matter to her, including gay rights, antisemitism and her feelings about the president, who is referenced in a chapter title simply as the “orange f**kface president.” But a great deal of the hatred sent her way on social media is simply because she’s Jewish.

“I get so much, especially on the internet,” she said. “It is unbelievable, the amount of antisemitism, the hatred. It’s really bad.”

Gold also isn’t surprised when people cherry-pick jokes from her past acts or comments she’s made during radio or podcast appearances in an effort to “cancel” her. But she refuses to change her pull-no-punches approach.

“I have no edit button, I’ve never had an edit button,” she said. “I have to call things out or I feel really uncomfortable.”