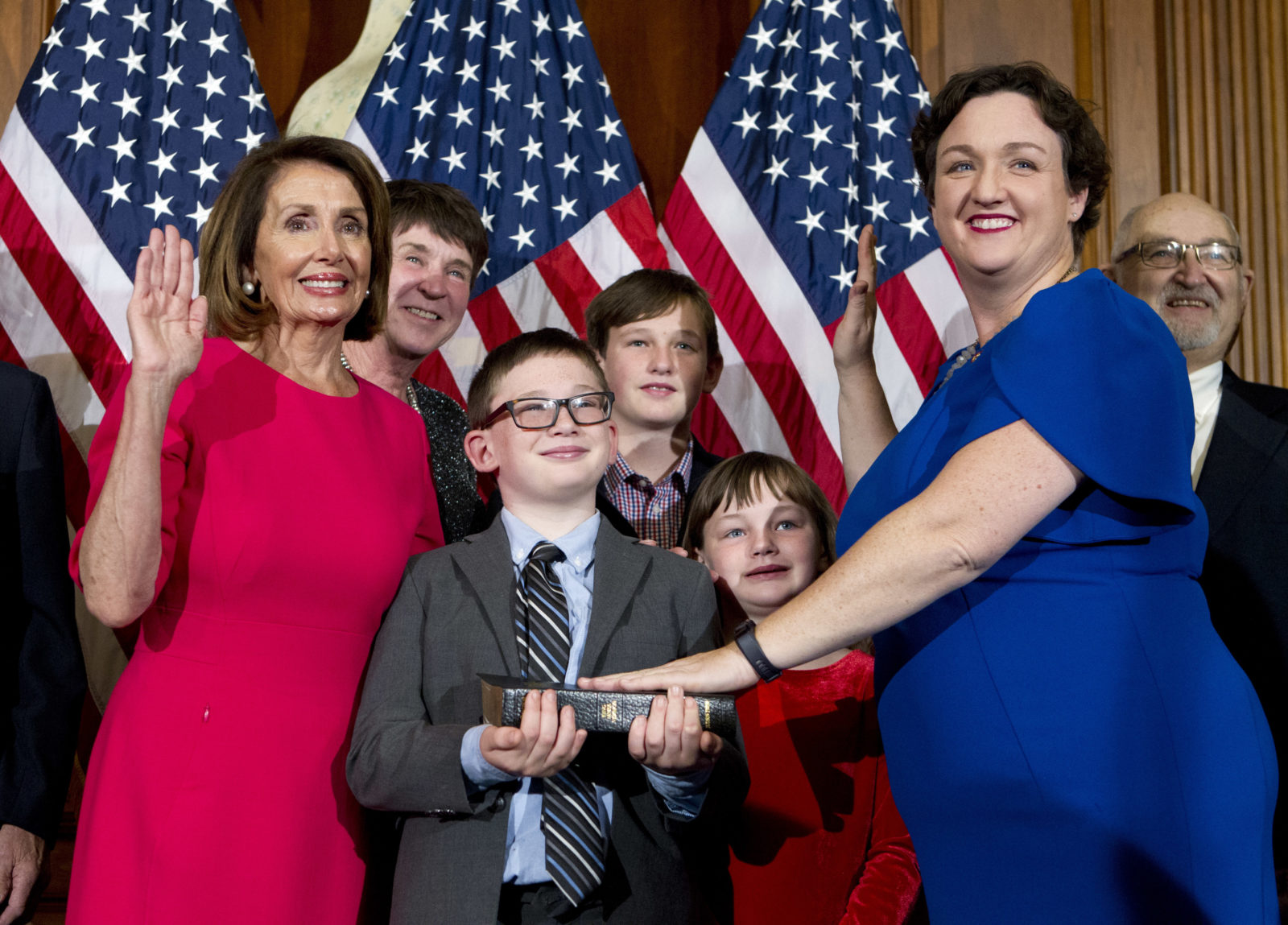 Rep. Katie Porter (D-CA) has earned a national profile for her rigorous and combative approach at congressional hearings, hurling pointed questions at government officials including Secretary of Housing and Urban Development Ben Carson and Centers for Disease Control and Prevention Director Robert R. Redfield. But when she is in her home district, Porter is often the one being cross-examined. The freshman congresswoman recalled a town hall at a synagogue last November, when a constituent stood up and asked her, point blank, why she hated President Donald Trump.

Porter, 46, has gotten used to fielding such questions during her term representing California’s 45th congressional district, a traditionally conservative portion of Orange County. Still, the progressive Democrat and former law professor seems to relish the opportunity to engage in conversations with her constituents, whatever beliefs they may hold.

“The thing that allows me to be successful in representing a really diverse population is that I’m pretty frank,” she said. “I try to be respectful in how I communicate, but I’ll just say to people, like, ‘I see it differently,’ or, ‘here’s how I think about it,’ or, ‘these are my concerns with that.’ And I think the willingness to have an honest dialogue with people, even when there is disagreement, buys you a lot of good will.”

Porter is banking on that good will as she defends her seat this cycle. In 2018, she flipped the district when she beat two-term Republican incumbent Rep. Mimi Walters by just four percentage points — and became part of a wave of newly minted Orange County Democrats including Reps. Gil Cisneros (D-CA) and Mike Levin (D-CA).

This election season, Porter is in a better position than she was two years ago, thanks perhaps to some of her viral moments on the Hill. She has raised more than $8 million in her effort to fend off Mission Viejo City Councilman Greg Raths, who has pulled in only about $750,000, according to the latest filings from the Federal Election Commission.

Porter seems relatively unworried by her opponent, having recently launched a political action committee, called the Truth to Power PAC, whose stated motive is to support progressive candidates around the country. The congresswoman has already had some apparent success with her efforts: she backed Mondaire Jones, Jamaal Bowman and Ritchie Torres, all of whom are projected to have won their New York congressional elections.

Porter has also thrown her support behind Ammar Campa-Najjar, who is running for Congress in a historically conservative district of southern California. “Katie Porter is an outstanding member of Congress who is actually dismantling the status quo that’s left too many behind,” Campa-Najjar told JI. “She’s masterfully exposing corruption and corporate greed in a way that’s inspiring people to demand serious change.”

Porter told JI that she carefully selects the candidates she chooses to support.

“I’m really interested in trying to support candidates who don’t necessarily come from the kinds of backgrounds where there is a built-in fundraising ability or a built-in network of expertise,” Porter said. “I’m really looking for people who are thoughtful in how they approach issues. I’m looking for people who are going to bring their unique and different life experiences to Congress. I think one of the things about the class of 2018 that’s really different is most of us — not all of us, most of us — weren’t elected before. We didn’t work our way up.”

For her part, Porter has worked her way up, though not in the way she means. She grew up in rural Iowa, where she witnessed candidates traveling through on the campaign trail, “which gave her a sense of the good politicians could do as well as the emptiness of political promises,” said Rabbi Arnold Rachlis, the spiritual leader of the University Synagogue in Irvine. “I think that has forged her into being the congresswoman that she is today,” he told JI.

Before she became a congresswoman, Porter was a law professor who studied under now-Sen. Elizabeth Warren (D-MA) at Harvard Law School. Josh Mandelbaum, a Des Moines city councilman, took law courses with Porter when she taught at the University of Iowa and regards her as a mentor.

“You definitely wanted to be prepared for every time you were in her classroom,” he said. “She’s a lot like what you see publicly. In law school you deal with the Socratic method, and she’s very quick not just with the first question but with the follow-up question — and if you weren’t fully prepared, she was quick with the sort of witty rejoinder. She’s sharp and quick-witted as a professor, but also what comes across, too, is she’s thinking about how you use the law to solve problems and help people.”

Mark Oppenheimer, an editor at Tablet magazine who teaches English at Yale University, is a college friend of Porter’s. He says the midwestern clichés — earnest, quiet, polite — do not apply to his former roommate. “She definitely would have held her own in any dairy restaurant on the Lower East Side,” Oppenheimer quipped, imagining that as a congresswoman, Porter is “constantly thinking of cutting remarks” that her aides have to talk her out of.

Porter’s straight-talking ethos has, perhaps, earned her some sighs from her aides. Recently, she was on Samantha Bee’s Full Frontal when she dropped an expletive that became headline news. “If you’re full of bullshit, I’m coming for you,” Porter said in response to a question from Bee about “appearing in every Republican’s nightmares.”

Porter says she hasn’t tempered her views in her own district, where such statements might alienate her constituents, but she hastened to add that she mostly tries to avoid instances of partisan one-upmanship. “I really almost never talk about President Trump or about Democrats or Republicans,” she said, adding, “I don’t find that naming and creating these different divisions is particularly helpful.”

“I am eager to learn, willing to listen, not afraid to ask hard questions and have tough conversations, and I think that is a really important part of representing an area like this,” she said. “We have that same level, I would say, of ideological diversity among the Jewish community that I represent.”

Porter has never been to Israel but plans to go next year if she can. “I would have loved to have gone this year, but my children are very young and being a single parent, [it’s] really tough to be away from your kids as much as I am already in Congress.”

The congresswoman believes that Israeli Prime Minister Benjamin Netanyahu’s policies have been misguided. “I think annexation is counter to Israel’s national security interests,” she said. “I think it will undermine a future two-state solution, which I support. And that’s not just my opinion. That’s really what I have learned in talking to people who are experts, including Israel’s former military leaders.”

Porter supports continued U.S. aid to Israel, but she put forth a kind of tough-love approach that is typical of her no-nonsense style.

“The overarching purpose of aid to Israel is to help it become strong and secure, and to bring peace and stability to that region,” she said. “Whenever there is a discussion about any action that might undermine that goal, I think it’s important for us to be pointing out that, you know, it’s called ‘security assistance,’ because the purpose is to help keep Israel safe and secure, and we think that this decision or that decision would be a move in the wrong direction and would destabilize the region and would expose Israel to greater risks.”

Before the pandemic, Porter lobbied for the United States Holocaust Memorial Museum’s traveling exhibit to be displayed in the library at the University of California, Irvine, where she worked as a law professor.

“We have seen a spike, like some of the other areas, in hate crimes,” Porter said, “and so I think it’s really a wonderful opportunity, given the diversity of this community — and that we are relatively far from major museums, which are more likely to be in L.A. — for us to have that exhibit.”

It has been delayed because of the novel coronavirus, which has also thrown a wrench in traditional campaigning. As the general election looms, Porter has been getting into campaign mode even as she has devoted some of her war chest to supporting other candidates around the country.

“I represent a district where Republicans still outnumber Democrats, and I’m taking nothing for granted when it comes to reaching voters in the 45th District,” she said in a statement to JI after the interview. “Especially with the coronavirus pandemic preventing traditional means of voter contact, our grassroots donations will help us have conversations with the full diversity of Orange County families, including those whose voices have not traditionally been heard in our political process.”

Despite his meager campaign chest, Raths told JI in a statement that he was confident voters would choose him over Porter. “This is a right-of-center district, and she is a hero of the progressive left,” he said, adding, “We will show my proven track record as a city councilman getting things done for the people of my city, in contrast to her record chasing the national spotlight.”

At the moment, Porter seems more concerned about engaging with constituents than dealing with Raths. “Orange County is a place that has been Republican for so, so, so very long that it has a lot of people here who are not comfortable with political conversations,” she said. “So, how can we replicate what makes those door-to-door conversations effective?”

“People talk about politics when someone knocks on their door because they’re comfortable in their home — it’s literally their fortress; it’s a safe place to have those conversations,” Porter said. “So how do you go about replicating that environment while respecting public health? That’s certainly something that I’m thinking a lot about.”

One way her campaign is planning to get around door-to-door canvassing, she said, is by engaging in peer-to-peer personalized texting.

Not that she is, necessarily, imagining that every text exchange will result in a kumbaya moment. Some may be more like the town hall in which she was accused of hating Trump, but she embraces the tension nonetheless.

“While I may not agree with them,” she said of those who take issue with her politics, “their thoughts and perspectives are welcome.”