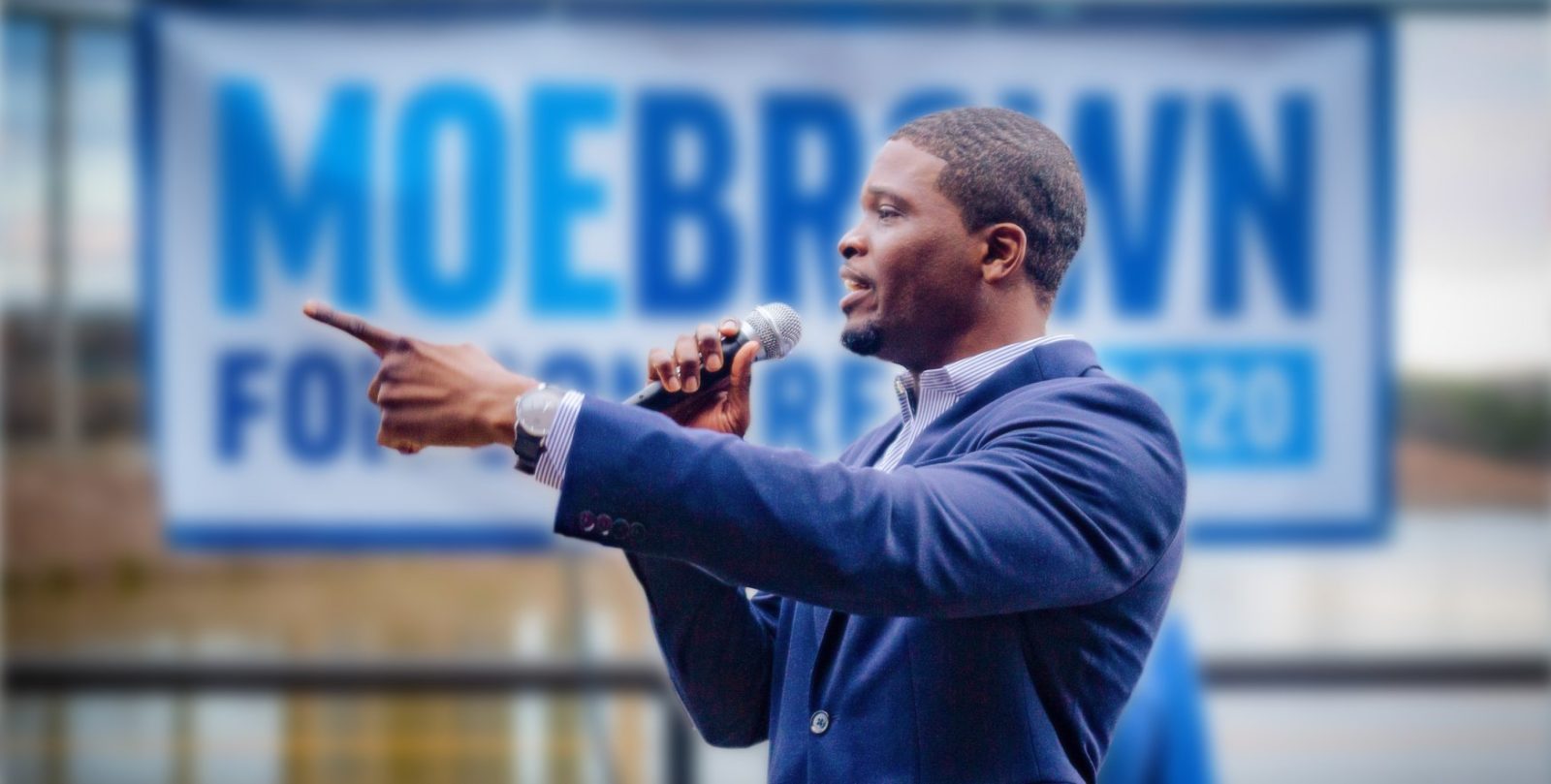 At first glance, former University of South Carolina Gamecocks football captain Moe Brown may not seem like a conventional candidate for Congress.

From the day he was born, Brown has overcome the odds, triumphing over family hardship, the death of his younger brother and the end of his football career. Now, Brown is positioning himself as the Democratic Party’s pick to take on Rep. Ralph Norman (R-SC) this November in South Carolina’s 5th congressional district.

Brown was born to a 16-year-old single mother, and his family struggled with financial instability throughout his childhood. He excelled in football from a young age and earned a spot on the University of South Carolina’s team, becoming the first in his family to attend college. When his dreams of playing professional football did not pan out, Brown, now 32, took a position in the South Carolina Department of Commerce under then-Gov. Nikki Haley.

As the only Democrat actively campaigning in the district, he’s almost certain to clinch the nomination in Tuesday’s primary and face off in November against incumbent Norman, who has held the seat since a 2017 special election. Brown will have an uphill battle to unseat Norman, who won the district by more than 15 points in 2018; though in 2017 he pulled off a much narrower victory of 3 points.

As Brown reflects on his childhood, he does not focus on the hardships, but rather the support and encouragement he received from his family and faith leaders.

“What I did have was a lot of people who love me, and a lot of people who pushed me and, I think the most important thing was, a lot of folks who held me accountable,” he said in an interview with Jewish Insider. “That helped shape me into the person that I am and how I fundamentally see life. Be a person of your word, and keep your word.”

He cited his grandmother, a pastor and other members of his family who served as clergy as models for leadership. “I always found myself in a leadership position… I just kind of grew up in it, and that was all I was around,” he said. “So me… running for Congress is not terribly surprising to a lot of the people around me.”

But politics were far from Brown’s mind when he was younger. “When I was a kid, I wanted to play football,” he said.

His years spent playing the sport helped shape Brown’s outlook on the world. “It set me up to be able to handle anything,” he said. “Because when you have so much pressure on you to perform on such a high level, and literally hundreds of thousands of people believe in you as an athlete to make or break their Saturdays or Thursdays… you become very self-aware.”

Brown said that football helped him develop self-awareness, perfectionism, collaboration and leadership skills that have carried over into many aspects of his life. “But for that, I don’t know that I’d be here talking to you,” he told JI.

But the day before Brown’s graduation from college, tragedy struck when his younger brother died by suicide in prison while serving a 15-year sentence for armed robbery. Walking across the stage in Colonial Life Arena to receive his diploma “was just very surreal… I was in kind of a daze,” Brown said. “I was there in person, but in a lot of ways I was somewhere else.”

Brown, who said he was both a brother and a father figure to his brother, seems to shoulder some of the blame for his brother’s imprisonment.

“He knew that I held him to a very high accountability level because he was just so talented and gifted… I always had a sense that I was supposed to protect him as a big brother and keep pushing,” he said. “And when I found out, one, he had got in trouble, and, two, what he did to get him in prison, I was so hurt by that. I cried, for almost two hours. And then to lose him in prison, a part of me felt like I did not protect him as a big brother.”

After graduating college, Brown pursued a professional football career, turning down multiple attempts by then-Secretary of Commerce Joe Taylor to recruit him for the agency. But after months without an offer from an NFL team, Brown, who had studied marketing and finance in college, accepted an internship with the Department of Commerce. Three months later, he accepted a full-time position as a project manager for the department, working with businesses looking to set up shop in the state.

As a Democrat working in a Republican administration, Brown said he rarely encountered partisan conflicts in his work. “The reality of bringing jobs and investment to the state was way more important than the identification of who was the Republican or the Democrat,” he said.

The rare instances when politics did rear its head during Brown’s time at the Department of Commerce were because, he said, “I was making stands on stuff that really meant something to me,” such as in an op-ed he wrote in 2015 about racism in the U.S. Following the op-ed’s publication, he was called in to talk to his supervisor and ultimately ended up discussing the points he wrote about with the secretary of commerce, which he said was “very productive.”

That attitude is a major part of Brown’s pitch to voters in the district.

Another divide he’s prepared to tackle is the Israeli-Palestinian conflict.

“I know that the two-state solution is really the only solution that will allow Israel to remain both a national homeland for the Jewish people and a democracy,” he said. “I believe the United States has a role to play in that. We’ve got to make sure that we can be an honest broker to achieve that face-to-face solution between Israel and Palestine. If we can do that, I think it will be not only good for that region but it will be good for the United States.”

“It will just tamp down some of the conflict that you’re seeing in the area. When you make people desperate, they get desperate and they will find a way to find the solution that they need,” he said. “If they’re not getting aid, and they’re in just desperation, conflict will just go on the rise. So I think we do need to give that aid back to them. I think it’s in our best interest.”

Brown’s road to Washington may have its hurdles, but he’s got the support of a popular name in the state: the former chair of South Carolina’s Democratic Party and current Senate candidate Jaime Harrison.

“Electing Moe Brown is about the emergence of a new South that’s diverse, inclusive and bold,” Harrison, who is campaigning with Brown, told JI. “I look forward to working with him on the campaign trail and calling him my colleague in Congress this November.”

Brown also has some personal experience relating to current national conversations over discrimination in law enforcement. While in college, he was pulled over and arrested for speeding on the way to his first day of summer school and summer workouts for the Gamecocks. Brown said he tried to explain the situation to the officer, but was asked to step out of his car.

“What [I thought] was going to be just a simple traffic ticket escalated to me getting out of the car,” he said. “I don’t know if that would have been different if I had a different skin color. But it definitely could have maybe been the case.”

During the stop, Brown informed the officer he had a registered firearm in his car — a sequence of events with similarities to the 2016 shooting of Philando Castile, who was killed by a police officer who initially pulled him over for a broken taillight. “It could have escalated a whole lot worse… it could have been bad,” Brown said. “But fortunately, I was… calm and trying to tell her what was going on. And it didn’t get to that point.”

Brown said that, to address on a systemic level the issues that have sparked nationwide protests, the U.S. needs a “cultural change.”

At a time when national tensions are running high, Brown feels he has a hopeful message to bring to Washington.

“The continuing bickering and the hyperpartisan nature that we’ve seen in our politics I think goes against the fundamentals of what our country was built upon,” he said. “It was clear to me that well, Moe, you feel so strongly about this and you want to see a better America. Do something about that.”