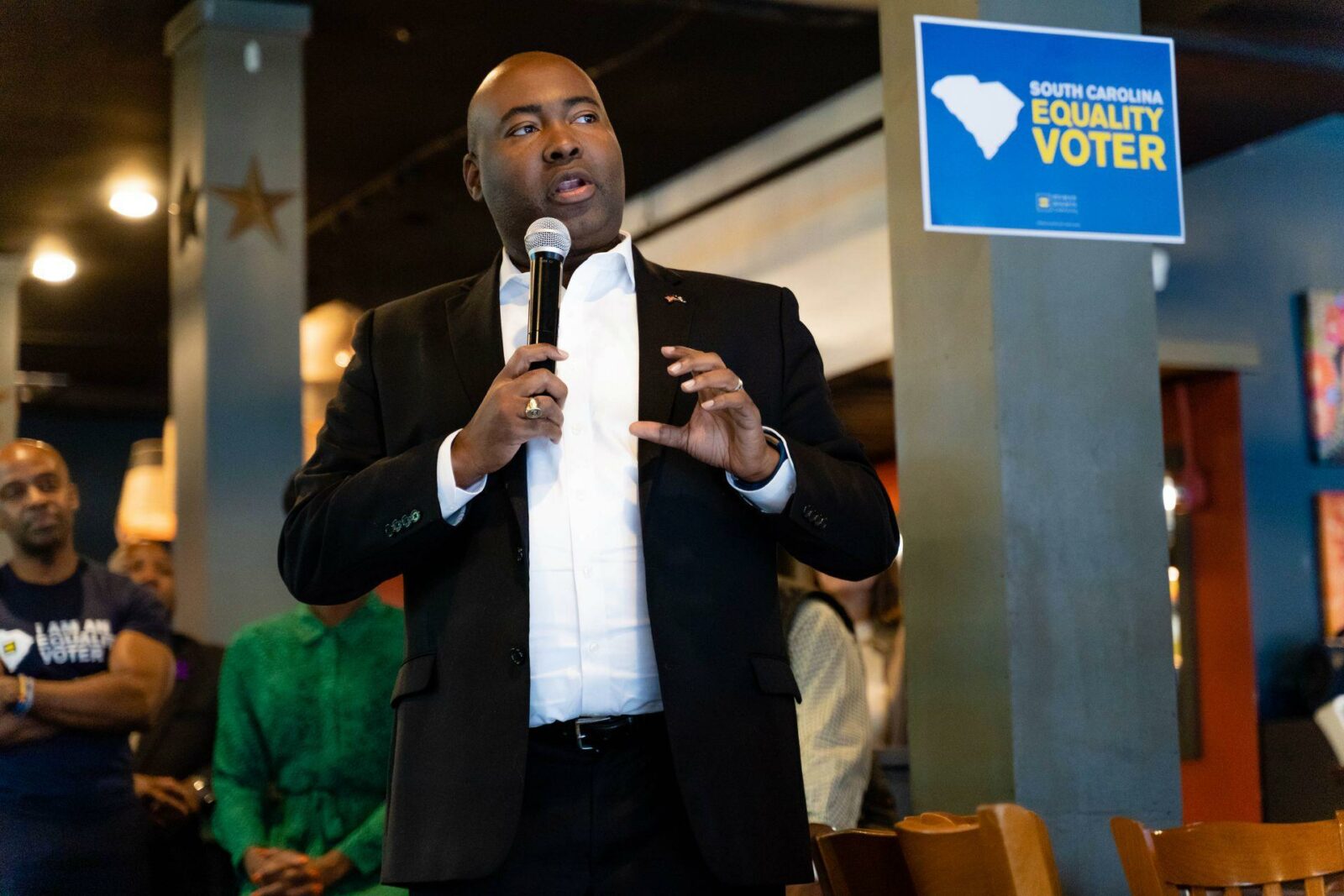 A battle between David and Goliath in South Carolina Senate race

A story Jim Clyburn thinks about from time to time is the Old Testament tale of David and Goliath. The 79-year-old House majority whip, who grew up in a parsonage under Jim Crow, knows from underdogs, having served since 1993 as a Democrat in solidly red South Carolina.

Clyburn brought up the biblical story — in which David vanquishes his foe using only a sling shot — while assessing the prospects of another South Carolina Democrat: his protégé Jaime Harrison, now running a long-shot campaign to unseat Lindsey Graham in one of the most closely watched Senate races in the country.

Harrison, an associate chairman of the Democratic National Committee, is facing “an uphill battle,” according to Clyburn. That may be an understatement: It has been 14 years since a Democrat won statewide election in South Carolina.

But Clyburn hastened to add that he believed his young charge still has a fighting chance.

Graham, one of President Donald Trump’s closest confidantes, has established himself in recent years as an estimable force in Washington, where he chairs the Senate Judiciary Committee.

But back in his home state, experts say, the 64-year-old Republican’s sharp turn to the right could potentially alienate some of the more moderate voters in South Carolina’s electorate.

Harrison’s allies believe that gives him an opening in the general election. “The extent to which people see Lindsey Graham as an enabler” of the president, Clyburn said, “improves Jaime’s chances.”

Anton Gunn, a former member of the South Carolina House of Representatives, was more optimistic. Harrison’s bid represents the “best chance since Reconstruction,” he claimed, to elect a black Democrat from South Carolina to the Senate.

Harrison, 44, has a compelling story he believes will help him make his case to voters.

He was born to a single mother in a small city outside Columbia, and raised by his grandparents. As a junior at Orangeburg-Wilkinson High School, he called Clyburn out of the blue and asked if he would be willing to swear him in as president of his honors society.

“Any 11th grader that’s got enough guts to call his congressman and ask him to come to his high school and swear him in because of his honor society shows you something about him,” Clyburn recalled. “And I suspect it tells you something about me, because I went,” he added. “When I met him, I just knew that I was meeting somebody special.”

Years later, Harrison would go on to serve as Clyburn’s director of floor operations and then as the executive director of the House Democratic Caucus.

During an eight-year stint as a lobbyist at the Podesta Group, Harrison became the first African-American chair of the South Carolina Democratic Party. In 2017, he ran unsuccessfully for DNC chair, losing to Tom Perez.

Harrison, who lives in Columbia with his wife and two sons, announced his Senate bid last May and has since raked in an impressive sum of approximately $7.5 million, according to the Federal Election Commission.

“I’m a different candidate,” he told Jewish Insider in a recent interview, arguing that his experience growing up poor in the South — coupled with his tenure working for corporations — makes him a candidate who can appeal to a wide swath of voters.

Harrison said he had encountered a number of constituents who have taken issue with what he described as his opponent’s “flip-flopping” — Graham was initially critical of Trump but has since warmed to the president.

“You can walk around the state of South Carolina and ask people about Lindsey Graham,” he said, “and one of the first questions you get from them is, ‘What happened to that guy?’”

“I had respect for the old Lindsey Graham, even though I disagreed with him on a lot of policy issues,” added Harrison, a moderate Democrat whose platform centers on such issues as infrastructure, the environment and paid family leave.

“But this Lindsey Graham is someone who doesn’t have a moral compass.”

A spokesman for Graham declined to comment for this article.

Harrison seems willing to give his opponent credit on only one matter — Israel — telling JI that the senator “has had a really strong record” when it comes to the Jewish state.

Still, their approaches to the Middle East differ significantly. Graham, a fervent pro-Israel advocate, is a foreign policy hawk who voted against the Iran nuclear deal, pushed for the U.S. to recognize the Golan Heights as sovereign Israeli land and sponsored the Taylor Force Act, which conditions U.S. aid to the Palestinian Authority on efforts made by the PA to cease payments to terrorists.

“He is such a believer,” Fred Zeidman, a Houston-based GOP donor and Jewish communal leader, said admiringly of Graham.

Norm Coleman, the former Republican senator from Minnesota and current chair of the Republican Jewish Coalition, agreed. “He is by far the best friend that Israel has in the United States Congress, and his record reflects that,” Coleman told JI.

Harrison, on the other hand, believes that protecting Israel’s security also includes giving aid to the Palestinians — which, he said, helps create stability in the region.

He added that it was important the Palestinian Authority “meet its international commitments with regard to the recognition of the state of Israel and the rejection of terrorism.”

Harrison believes that Trump’s actions in the region — moving the American embassy to Jerusalem and putting forth a peace plan written without Palestinian cooperation — have been destabilizing. “I think he’s created more tension,” Harrison told JI.

“The priority should be, how are we creating a two-state solution?” said Harrison, who first visited Israel about 15 years ago as a congressional staffer. “How are we making sure that we protect Israel and protect its security? What can we do in order to create more harmony in the region rather than creating more anxiety in the region?”

Harrison’s views on the Israeli-Palestinian conflict have earned him an endorsement from J Street, the liberal advocacy group.

Ilya Braverman, J Street’s national political director, said in an interview that it seemed as if Harrison’s commitment to a two-state solution was more than just a talking point — and that he believed Harrison would advocate for a peace plan that respected Palestinian self-determination along with Israel’s right to defend itself.

Whether Harrison will get the chance to push for such a plan depends on his performance in the June 9 primary and then in November, when he is expected to square off against Graham, whose last election was in 2014, during the Obama administration.

Since then, the Republican party has moved considerably to the right, and the senator has followed, more out of a sense of survival than ideological conviction, according to Gibbs Knotts, a political scientist at the College of Charleston. It’s a strategy Graham has employed to fend off primary challengers from within his own ranks.

“But it does make him a little more vulnerable in the general election,” Knotts said.

Harrison will likely have to rely on a surge in African-American voter turnout in order to pull off a win this fall, according to Knotts. And with his millions in donations, he has the resources to hire staff and get his message out — though the novel coronavirus pandemic has disrupted that effort.

“We’re trying our very best to stay connected with the public and communities across South Carolina,” Harrison said.

Harrison has a valuable supporter in Clyburn, whose endorsement of former Vice President Joe Biden in the late-February South Carolina presidential primary helped give the Democratic presidential candidate a pivotal win over Sen. Bernie Sanders.

Robert Oldendick, a professor of political science at the University of South Carolina, was less sanguine.

“Jaime is probably as strong a candidate as the Democratic Party could put up against Sen. Graham,” he told JI. “Having said that, Sen. Graham has a lot of advantages in this state,” including name recognition, fundraising and incumbency, along with the state’s partisan breakdown, which favors Republicans.

For his part, Clyburn is holding out hope. In conversation with JI, he brought up a passage from the New Testament — Hebrews 11:1 — that he felt was relevant in light of Harrison’s underdog status: “Now faith is the substance of things hoped for, the evidence of things unseen.”

“Just because we can’t see it,” Clyburn said, alluding to a scenario in which Harrison comes out on top in November, “doesn’t mean it can’t happen.”