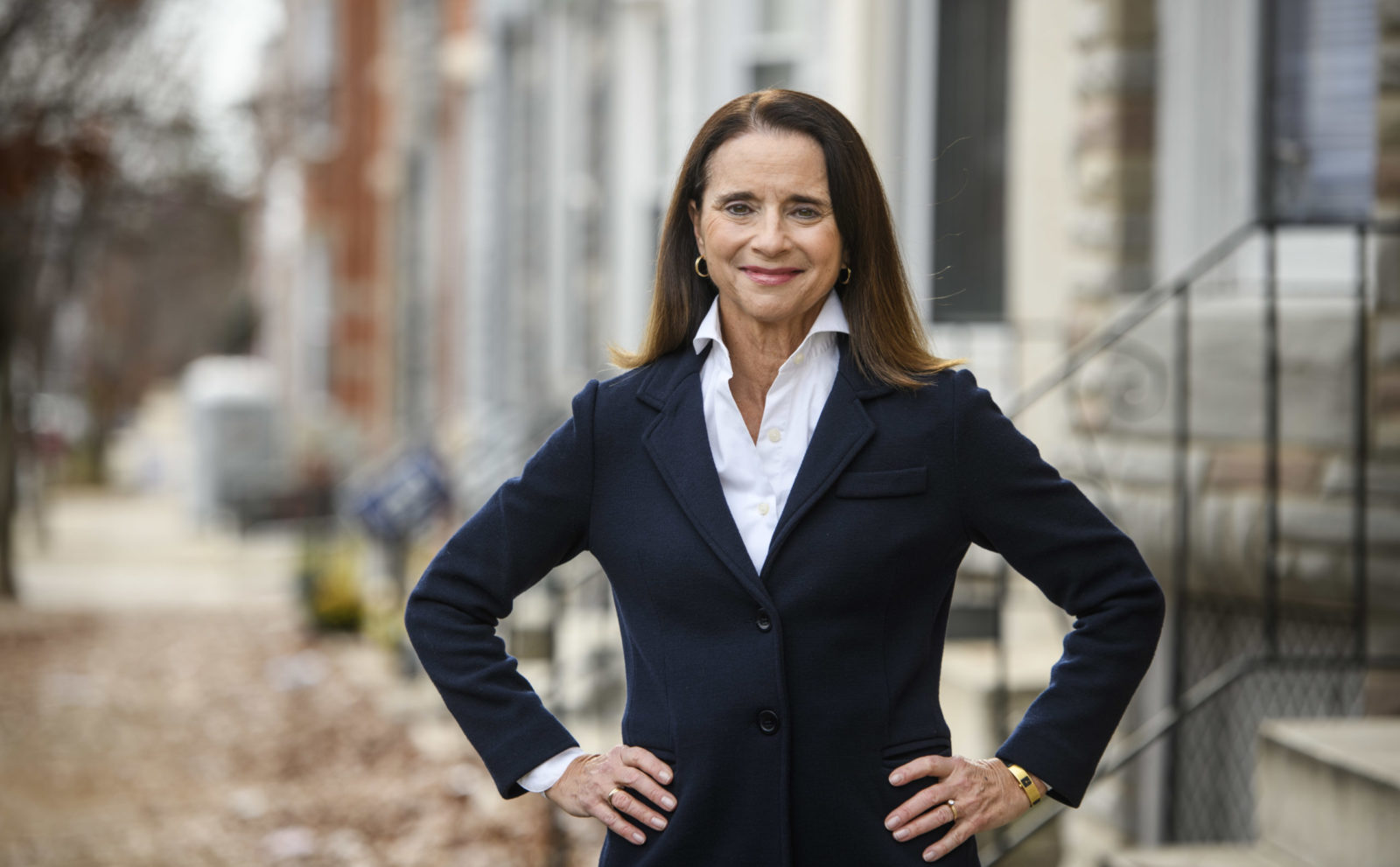 Can this Treasury Department veteran bring Baltimore back?

Mary Miller has called Baltimore home for 34 years, and now she wants to bring a 'fresh perspective' to City Hall

When Mary Miller gets asked about her work at the Treasury Department in the late 2000s, a smile crosses her face, and she begins talking about financial markets and debt management. Five minutes later, she has completed a lecture fit for a college macroeconomics class. This is when her advisors tend to step in and tell her, politely, to turn down the policy jargon, because Miller is not a professor. She is, for the first time, a politician.

Miller decided in January to run for mayor of Baltimore, the city where she has lived for 34 years. To get the job, she’ll have to unseat the city’s incumbent mayor, Jack Young, and defeat 22 other candidates in Maryland’s June 2 Democratic primary. (Fewer than 10% of Baltimore voters are Republicans, so the Democratic primary effectively decides the race.) In an independent poll released last week, Miller was tied for the lead — with 18% of the vote — with Sheila Dixon, a former Baltimore mayor who resigned in 2010 after she was convicted of embezzling gift cards meant to be donated to charity. The poll indicated that 22% of voters are still undecided.

The race caps off a difficult decade for Baltimore. Five years after Dixon’s resignation, Freddie Gray, a young black man, died after sustaining a neck injury while in a police van, sparking protests across the city. Violent crime has spiked in recent years. Last year, Mayor Catherine Pugh resigned following accusations of “self-dealing” connected to the sale of thousands of copies of Healthy Holly, her children’s book, and in February she was sentenced to three years in prison. Then the coronavirus pandemic struck, leaving tens of thousands of Baltimoreans unemployed and infecting nearly 5,000 in the city of 600,000.

Enter Miller, a self-proclaimed “problem-solver,” who contends that the city needs a seasoned manager who can bring investment dollars back to Baltimore, and bring down crime and systemic racism along the way. “We need a new kind of leadership,” Miller said in a recent Zoom interview with JI. “We also need much stronger management of this city if we’re gonna get things going in a better direction.”

The coronavirus pandemic has made it easier for her to make the case that her background in investment banking and in the Obama administration has prepared her to get Baltimore out of this mess. “I’m bringing in a fresh perspective that I think could really serve the moment where we are going to have to do things quite differently as a city,” Miller argued.

Miller grew up in Ithaca, NY, but nurtured a love of cities, which became the guiding principle of her career. After graduating from Cornell, she moved to Washington and worked on Capitol Hill, where she was inspired by Congress’s passage of what she described as “big programs to try to drive investment in environmental and infrastructure projects across the country.” After a year she decided to study public infrastructure and public investments and left for the University of North Carolina at Chapel Hill, where she earned a master’s degree in city and regional planning.

She returned to Washington in 1980 to join the Urban Institute, a think tank founded in 1968 by President Lyndon Johnson to advance research on eradicating poverty. Three years later she took a position as a municipal bonds analyst at T. Rowe Price, a small Baltimore investment firm that went public soon after Miller arrived, and now employs more than 7,000 people. Miller, with no experience in the private sector, was a “nontraditional hire,” she said. “I might be a nontraditional candidate for mayor, too.”

Baltimore in 2020 is very different from the Baltimore of 1980. Harborplace, a shopping center that opened that year on Baltimore’s Inner Harbor and now sits half-empty, was at the time, she said, “a spanking new, beautiful symbol of everything Baltimore offered to the world. Tons of tourists. Downtown was coming alive with new investments, hotels and office buildings.” The National Aquarium, which opened a year later, was a “home run for the Baltimore Harbor,” Miller said. “You were excited about Baltimore. It just felt like a cool place and a city on the move.”

In retrospect, Miller realized that “we still weren’t bringing the whole city along.” Baltimore remains racially segregated from a decades-long history of redlining. As Miller worked her way up to T. Rowe Price’s management committee, she participated in occasional community service projects with groups like Habitat for Humanity. “We painted houses and volunteered at neighborhood cleanups and so forth, but we weren’t changing the economic reality of those neighborhoods,” Miller came to understand. “We weren’t giving people that lived there meaningful jobs. We weren’t giving them a good education.”

This is where the policy wonk in Miller kicks in. She draws on what she learned in the first half of the decade, when she served as under secretary for domestic finance at the Treasury Department. She talks about rebuilding the mortgage-financed market, running Treasury auctions, and issuing debt. She talks about the “fiscal stabilizing role the government can play.” This jargon might not mean much to most people, but Miller claims that her experience — even if voters don’t fully grasp it — is what matters. “There are financial tools and aid” that cities can use to recover from the economic shock of the coronavirus, Miller said, “but you need to know how to go get it and put it to work.”

Miller, who is white and Catholic, is asking most Baltimore voters to support someone who doesn’t look like them — the city is 63% black and 32% white — and who hasn’t met most of them, since the coronavirus pandemic virtually shut down in-person campaigning in March.

“Baltimore is a very conservative city,” said Mark Reutter, a longtime Baltimore journalist who writes for the independent news site The Baltimore Brew. “People like to know who they vote for, and they would rather vote for the devil they know, which in some cases would be Sheila Dixon, than some unknown like Mary Miller.”

But the coronavirus changed how Baltimore does politics. Every registered Maryland voter received a mail-in ballot for the state’s June 2 primary (which was initially scheduled for April 28). Reutter thinks the all-absentee election will skew heavily toward older voters. The question is whether older white voters, who will likely support Miller, vote in larger numbers than older black women, who have rallied around Dixon.

Miller has done something else unusual — she spent more than $2 million of her own money on the race, earning near-unlimited air time in front of Baltimore voters who are stuck at home. “She’s on television several times every evening on every channel,” said Matthew Crenson, professor emeritus of political science at Johns Hopkins. Voters might not have met Miller but now see her daily in their living rooms. “The fact that she has a lot of money to spend is one of the things that has helped her, but the other thing is the pandemic.”

Miller also has her dedicated supporters. Earlier this month, a group of 30 former Obama administration officials endorsed Miller, and last week her campaign released a letter signed by 142 “women leaders” who support her. She has also earned the backing of a number of clergy associations, including the Interdenominational Ministerial Alliance and Clergy for a Better Baltimore.

Miller recently participated in a Zoom call with members of Baltimore’s Orthodox Jewish community about issues in Northwest Baltimore, where many members of the community live. Miller said they discussed plans for vacant buildings in the area “and concerns about losing any of the public safety presence in the neighborhood,” as well as the project that will overhaul Pimlico Race Course, which hosts the annual Preakness Stakes horse race.

On Wednesday, several prominent members of the Orthodox Jewish community endorsed Miller, explaining that “we think Baltimore City has been going in the wrong direction, and if we are going to change the course, it starts with better leadership at the top.” Their letter included a statement from former Treasury Secretary Jack Lew, himself an Orthodox Jew (who does not live in Baltimore). “For over four years, Mary worked tirelessly on behalf of the American people, leading the U.S. Treasury Department’s efforts to tackle some of the most difficult challenges facing our country,” Lew said in the letter.

“I appreciate the work, and I’ll frankly say the load that the faith community carries in Baltimore in terms of community service and providing aid to people directly,” said Miller, who previously served on the board of Catholic Charities of Baltimore. Her church, St. Ignatius, hosts an interfaith prayer service on New Year’s Eve with Baltimore’s Christian, Jewish and Muslim communities. “I feel like we could have leadership at the top of the city that could partner better with nonprofits, with the faith community, to get everyone on the same agenda for Baltimore,” Miller explained.

Last month Miller marked her first Passover Seder, hosted by her son Tom, who recently converted to Judaism and spent last year’s fall semester studying law at Hebrew University. Miller suspects her son’s inclination toward Judaism and Israel might have come from her husband, James Dabney Miller, a senior associate at Johns Hopkins’s Bloomberg School of Public Health. “He was kind of an oddball, Atlanta-raised Episcopalian on a kibbutz,” Miller said of her husband, who took a year off of college to live at Kibbutz Neve Eitan, south of the Galilee. “There was something there that I think reached my son,” Miller said.

Miller has largely kept her family and her personal story out of the race, instead cultivating an image as a nose-to-the-grindstone technocrat with the leadership know-how to make change. In a normal election, that might not be enough for Baltimore voters. But this is not a normal election. Crime and vast unemployment call for a “break-the-glass sort of change where we stop disinvesting in ourselves and restore confidence in this city,” Miller said.

She made it to the C-suite. Now she wants to take on City Hall.