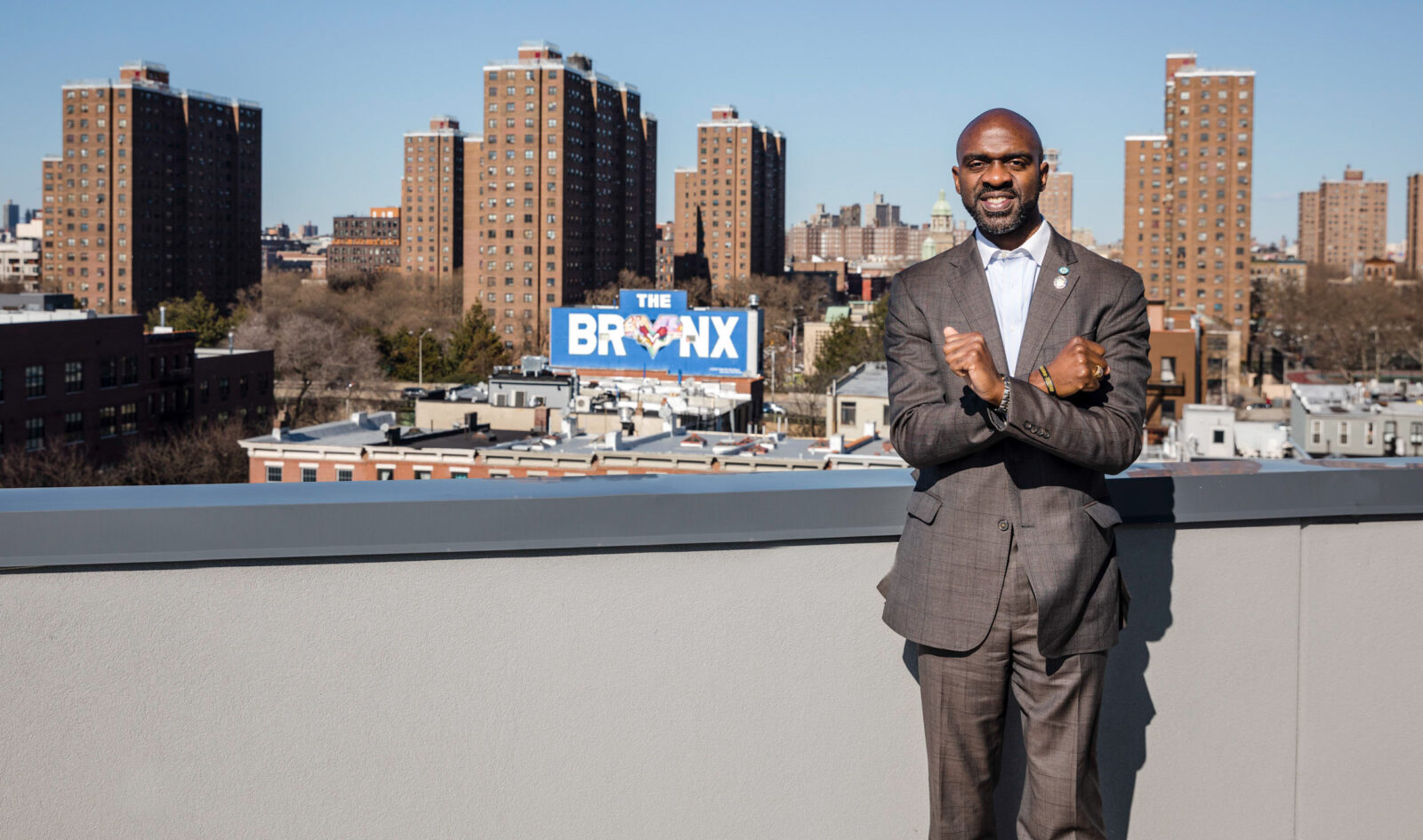 Michael Blake arrived at his South Bronx campaign office as if he were pulling up to a red-carpet event. Around noon on a Saturday in late February, the 37-year-old state assemblyman, now running to represent New York’s 15th congressional district, alighted from a black SUV accompanied by the actress Alfre Woodard and a couple of photographers who were snapping away.

Inside, however, Blake was greeted by a somewhat modest crowd. The room had recently been occupied by an assortment of Blake supporters, but they were all out collecting signatures ahead of the April filing deadline. By the time Blake arrived, about 45 minutes late, the office had cleared out considerably, with the exception of some campaign staffers, union members and small business advocates there to greet the aspiring congressman.

“We’re ready,” Blake boasted in an interview with Jewish Insider as he sat down in a cramped room in the back of his Lincoln Avenue headquarters. “And you’re seeing it. You are physically seeing it, right? It is four months from the election, and multiple unions are here. This is not what people usually see in a South Bronx race. They’re not used to that. We’re serious about winning this thing.”

The Bronx native, who currently represents the 79th Assembly district, often touts his connections — and they are impressive. Blake’s resume includes a pivotal stint as an Iowa political director with Barack Obama’s first presidential run more than a decade ago — when he met Woodard, now a friend, who has stumped for him in the past.

“Blake has always used his street cred as an organizer for Obama, and Obama’s popularity, as his calling card,” Joe Hirsch, an expert on Bronx politics who edits the Mott Haven Herald and Hunts Point Express, told JI. “He almost always brings it up.”

The experience has paid off in other ways, too. Blake — who followed up his campaign service with a position in the White House as a deputy associate director of the Office of Intergovernmental Affairs and then worked on Obama’s re-election effort — is now vice chair of the Democratic National Committee, which on Monday appointed a new Jewish liaison.

Asked how the party’s 2020 platform plank on Israel will pan out, Blake explained it is too early to say. “Until someone’s a nominee, there’s still plenty of time on that premise,” he said. “I think our job at the DNC is to make sure that we’re creating that space for voices to be heard.”

Still, Blake insisted that the party would continue to stand by the Jewish state. “We have been attentive to the previous conversations that have happened in terms of making sure there’s not language in there that would be anti-Israel,” he said.

Despite his position with the DNC, it has not always been smooth political sailing for Blake. In 2018 — three years into his tenure as an assemblyman — Blake mounted an unsuccessful run for New York City public advocate, a position that could have put him in line to succeed the mayor.

“He comes across as a climber,” said Michael Benjamin, an associate editorial page editor of the New York Post, who occupied Blake’s spot in the Assembly from 2003 to 2010. “And I think, from the way he was elected to the Assembly, a lot of people got that impression — that he was looking for his next post.”

Still, it was clear that Blake is connected to his community during his Saturday stroll with Woodard through the South Bronx, stopping in at local businesses to say hello, solicit signatures and distribute campaign materials. Dressed in a long black coat, a checkered purple scarf and a blue and gray flat cap, Blake was a poised, attentive and congenial candidate.

His can-do attitude notwithstanding, though, it’s an open question whether he will make it to Congress as he goes up against more than a dozen candidates who have entered the race since Rep. José E. Serrano, the district’s longtime Democratic representative, announced his retirement last March.

Though Blake has been endorsed by a number of congressmen, as well as several major unions, there are two frontrunners in particular who may spell trouble for him in the June 23 primary.

The first is Rubén Díaz, Sr., the Pentecostal minister who represents the more conservative side of the Democratic ticket and has a sizable constituency in the predominantly Hispanic district, which is said to be among the poorest in the country and includes the neighborhoods of Hunts Point, Mott Haven and Fordham Heights. The cowboy hat-wearing Díaz is a flamboyant presence in Bronx politics who has expressed his support for President Donald Trump.

The second is Ritchie Torres, a 31-year-old city councilman who, despite his relative inexperience, has a fairly decent shot of making it through to the general election. Torres has already raised more than $1 million, according to the Federal Election Commission — more than Díaz and Blake combined.

Other notable candidates include former City Council speaker Melissa Mark-Viverito as well as Samelys Lopez, a community organizer whose chances are slim but who has been endorsed by Rep. Alexandria-Ocasio Cortez’s new political action committee, Courage to Change.

With the exception of Díaz — a former state senator and current city councilman who opposes gay marriage and has compared abortion to the Holocaust — the leading candidates are, from an ideological standpoint, functionally similar.

In conversation with JI, Blake rattles off a number of causes to which he is dedicated, including student loan forgiveness, public housing and supporting businesses owned by women and minorities.

When it comes to foreign policy, Blake positions himself as an unequivocal supporter of Israel. In a position paper, he outlines his views on Israel and the Middle East, opposing the Boycott, Divestment and Sanctions movement, for instance, while arguing that “continued economic and diplomatic pressure can persuade Iran to return to the negotiating table” in order to ensure that the Islamic Republic abandons its “nuclear ambitions.”

Blake was circumspect when asked for his take on Sen. Bernie Sanders’s description of Israeli Prime Minister Benjamin Netanyahu as a “reactionary racist” in a recent debate.

“Whether it’s a good idea or not, that’s on Sen. Sanders,” Blake told JI. “I think the reality, though, is that there is a cloud surrounding Bibi that cannot be ignored. And there is rhetoric being used that is intensifying things. For us to have true peace, there has to be a two-state solution at some point. We can’t ignore that. And let the people decide. Clearly, there is tension in the air.”

Blake has been to Israel twice — with the AIPAC-affiliated American Israel Education Foundation and New York’s Jewish Community Relations Council respectively. Both visits, he said, were eye-opening experiences.

“If you want to grow, you need to go see,” he mused. “When you can spend time and meet Miss Israel, who’s Ethiopian, that’s powerful — I was like, ‘Wow, OK’ — and then have conversations where you have Ethiopian Jews who say they didn’t know that there were white Jews. But you think about that, like, ‘Oh, I didn’t think about that because I’m in New York.’”

Bringing his visit to Israel back to the local level, Blake said that he saw parallels between his experience as an African American in the Bronx and the plight of the Jewish people as antisemitic incidents have increased at home and abroad.

“If I’m here in the Bronx and I hear sirens, I may think about a police car,” Blake said. “If I’m in Israel, I hear sirens and I know a missile’s coming. So that appreciation I’m going to take with me to Congress. That’s my responsibility as a Bronxite. Here in the Bronx — in the north Bronx, in Riverdale in particular — that premise and that connection to the Jewish community is intertwined.”

During his business tour of the South Bronx not long ago, Blake’s connection to the community was on full display. Early on, he stepped into a shop called Bronx Native and held up an “El Bronx” T-shirt. “For the Puerto Rican Day Parade and then when I went to Puerto Rico,” he told Woodard, “we wore these shirts.”

“Oh, perfect,” she said with a laugh.

At several stops, however, it seemed that Woodard was the center of attention as she posed for photos with fans while brandishing a Blake campaign flyer.

That an Academy Award nominee who has appeared in countless films and TV shows would garner more attention than Blake wasn’t surprising. But it remains to be seen if his star connections will help him get to Congress this fall.