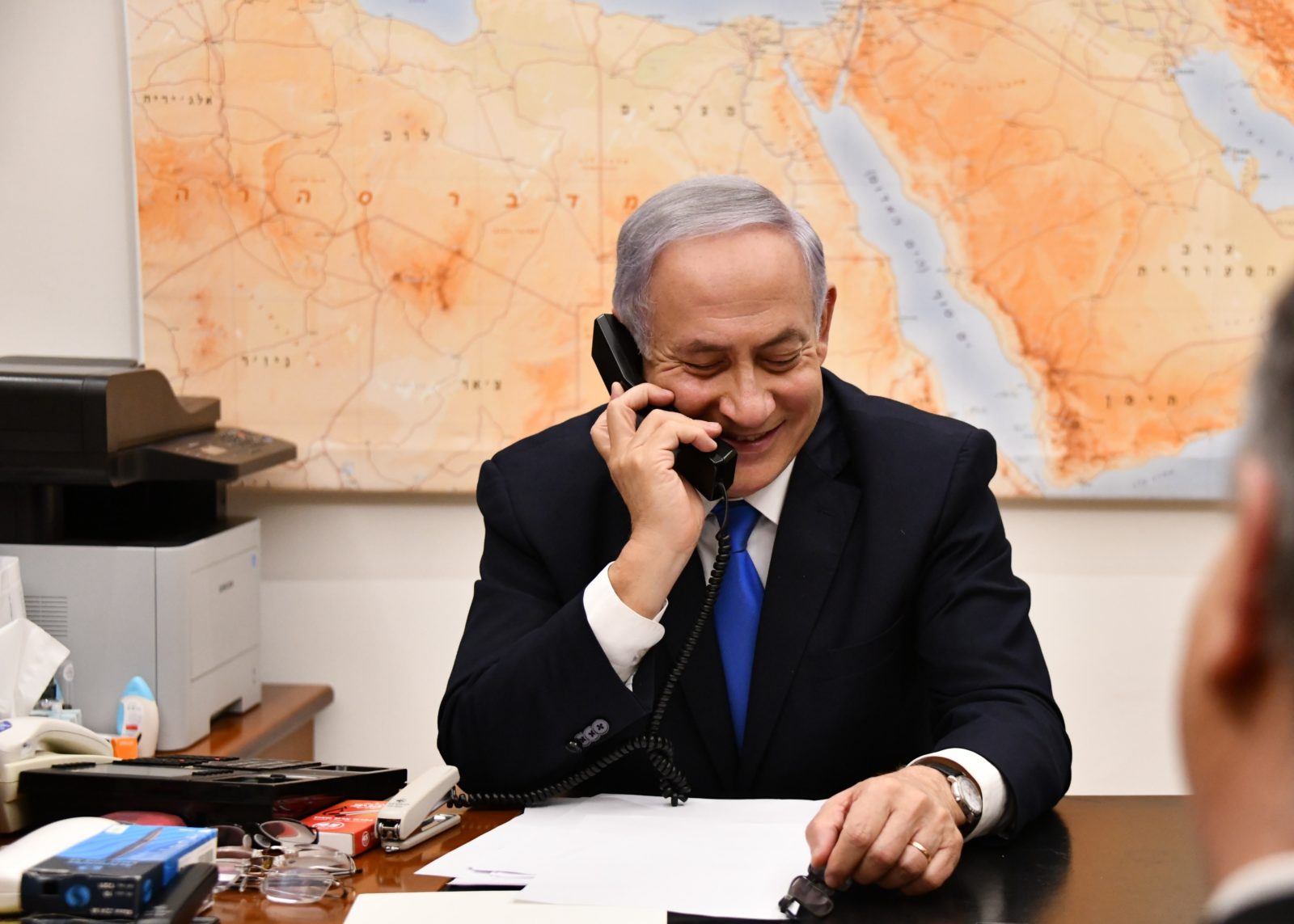 Bibi faces an upcoming election rematch and a slew of corruption cases. His legacy is still undetermined, say his critics and his supporters.

As Benjamin Netanyahu fights for his political life, he fights, too, for his freedom. Months after winning a mandate but failing to form a government, Netanyahu is seeking the trust of Israeli citizens to serve as their leader for a fifth term. Notwithstanding the results of the upcoming September 17 election and a ruling on his corruption cases, Netanyahu is set to mark a career and historical milestone — becoming the longest-serving prime minister in Israel’s history. On Saturday he will surpass David Ben-Gurion, hitting 4,876 days in office, which he first assumed on June 18, 1996, and returned to in 2009.

Jewish Insider spoke with several former aides, people who have served under him, and diplomats who have worked with him to discuss Netanyahu’s legacy as Israel’s number one political survivor.

Netanyahu’s most immediate goal, according to Shalom Lipner, a 26-year veteran of the prime minister’s office who worked under Netanyahu until 2016, is winning the next election and forming a governing coalition.

“By all relevant parameters — ambition to cement the gains of his tenure, disdain for his rivals (whom he believes are all unqualified to replace him), and desire to fight the legal allegations against him from the bully pulpit of a sitting prime minister — Netanyahu knows that he’s best served by extending his term ad infinitum,” Lipner tells JI.

Remaining in power is Netanyahu’s ultimate goal and perhaps his best chance to avoid prosecution or punishment, agreed Dan Arbell, a 25-year veteran of the Israeli Foreign Service, and Alon Pinkas, a former Israeli consul general in New York.

“I think that only Netanyahu knows what his next goals will be, but I assume that his primary goal is to stay in power and out of jail,” opines Susie Gelman, chair of the Israel Policy Forum.

But according to the Washington Institute’s David Makovsky and former Ambassador Dennis Ross, Netanyahu’s desire to remain on the political scene is also due to unfinished business on issues that, according to recent polling, the Israeli public still believes he is best suited to tackle.

“I think he wants to neutralize the Iranian threat — both the potential nuclear threat, and the one posed by Iranian rockets and potential precision guidance provided by the rockets in Syrian and especially Lebanon,” Ross said. “With the Iranians incrementally now shrinking their breakout time — with their gradual walk away from the JCPOA — Israel is likely to face a threat that Netanyahu has always defined as existential.”

Makovsky said that “Netanyahu’s self-image is one of being a historic leader, as the guardian of Israel — Shomer Yisrael — and he’s not someone who’s as much about seizing the opportunities as he is about discerning the dangers.”

The next two years will be the most crucial in determining Netanyahu’s mark on history, and achieving his goal of neutralizing Israel’s dangers, said Eugene Kontorovich, a professor at George Mason’s Antonin Scalia School of Law and an expert on Israeli-Arab issues. Having managed to establish a strong relationship with President Donald Trump, Netanyahu sees the Trump years as “an opportunity to undo a lot of the conventional wisdom around Israel’s diplomatic situation,” Kontorovich said.

Netanyahu believes the United States and other allies can “deal a decisive blow to Iran’s nuclear ambitions,” law professor Thane Rosenbaum tells JI, “and Bibi would be able to take credit for never kicking the Iranian can down the road — he remained fixated on the existential threat and was committed to leaving office having rid Israel of the Iranian menace.”

But according to Yossi Klein Halevi, a senior fellow at the Shalom Hartman Institute in Jerusalem, while Netanyahu “rightly sees himself as the standard-bearer of the struggle against Iran, he has compromised himself in so many ways, especially in his recent assault on democratic institutions. Whatever gain we have from Netanyahu the anti-Iran prime minister is undermined by Netanyahu the anti-democratic prime minister.”

When it comes to Netanyahu’s ultimate legacy, much depends on how and when he leaves the political scene, says Ross.

“The picture will be mixed,” the former diplomat suggested. While Netanyahu will “deservedly” get credit for “enhancing Israel’s economic and military power” and for strengthening relations with Russia, India and Egypt, “he will bear much responsibility if Israel loses its bipartisan relationship with the United States.”

Ross said Netanyahu’s embrace of Trump goes beyond warm relations, and noted that his government policies on the Kotel and conversion have alienated Democrats and American Jews. And “perhaps, the most dangerous of his legacies may be his policies that are leading Israel to become one state for two people.”

Former U.S. Ambassador to Israel Daniel Shapiro also pointed out that Netanyahu’s record on security and handling diplomatic relations with various key players of the international community “is impressive.” Nonethless, the ambassador said, Netanyahu should also be judged by “his reticence to reinforce the viability of an eventual two-state solution for when better Palestinian leaders emerge” along with “the expansion of settlements and increasingly normalized talk of annexation,” which will “imperil Israel’s Jewish and democratic future, and its long-term, bipartisan, values-based relationship with the United States.”

Pinkas, who is a fierce critic of Netanyahu, bemoaned the fact that Netanyahu began his career “as a great promise, a highly educated, articulate and urbane prime minister,” but turned into “a bitter, resentful, paranoid authoritarian.”

For that, Pinkas argued, “Netanyahu has very little to show for in terms of achievements and enduring impact on Israel. His only lasting success is making the two-state model all but unviable. Whether he is right or wrong, he never offered an alternative.”

The Israeli right-wing leader’s inability to show movement on the peace process, is actually one of his greatest achievements “from his political perspective,” according to Dr. Einat Wilf.

“He proved that Israel could enjoy a decade of relative calm, prosperity and ever-growing and stronger diplomatic relationships with countries around the world, without making peace with the Palestinians, and without even negotiating with them,” she told JI. “He demonstrated that in this world, many countries are more than willing to overlook the Palestinian issue, if they find economic, military and intelligence benefits in their relationship with Israel. In that, he has punched a hole through the left-wing thesis that without peace negotiations Israel would suffer ‘a diplomatic tsunami.’”

As a result, if these relations materialize and lead to normalization with the Arab world in the years to come, “Netanyahu will rightfully be considered on a par with David Ben-Gurion, as one established the state and secured its existence by military force, and the other would have ended the conflict with the Arab world, and secured Israel’s existence with peace,” Wilf predicted.

Lipner highlighted the fact that even Netanyahu’s political rivals “have attacked him almost exclusively on matters of character and impropriety — with limited focus on policy,” because “under his stewardship, Israel has marched toward record economic prosperity, world-class achievements in science and technology, and diplomatic breakthroughs on all continents.”

Nonetheless, his legacy is also one of “hyper-polarization” and “divisiveness within Israeli society” and therefore, Netanyahu “will be remembered as a prominent factor in the erosion of national solidarity during his years in office.”

The division and hatred between major segments of Israeli society and the Israel-Diaspora crisis will likely get worse “if Netanyahu wins in September and the makeup of his next coalition remains the same, with ultra-religious and nationalist-religious parties as his main allies,” Arbel predicts.

“I worry that that polarization will deepen,” Makovsky agreed.

According to Rosenbaum, while Netanyahu has taken advantage of his close relationship with Trump, “the one failed area and opportunity missed” was not getting ending Hamas’s rule in Gaza with an effective military campaign, “especially these last few years, when the world was focused on Donald Trump and the Syrian crisis, and unlike Obama, Trump would have not stood in the way.”