Have our people email your people. Share this sign up link with your friends.
IRAN DEAL: “GOP Sen. Corker Acknowledges Momentum For Iran Deal” by Erica Werner: “Some supporters have now begun aiming to get 41 votes, which would allow Democrats to kill the disapproval resolution outright in the Senate and protect President Barack Obama from having to use his veto pen. Corker said he didn’t know if opponents could stop that effort. But he criticized Democrats’ attempts to filibuster the disapproval resolution and block a final vote, given that Congress overwhelmingly endorsed hard-fought legislation giving lawmakers the right to weigh in on the deal.” [AP] • “Iran pact takes center stage in battle for Senate” [Politico] • “Iran Is Huge Right Now in North Dakota” [Bloomberg]

Reminiscent of the drip-drop headlines surrounding Bibi’s speech to Congress, with a different Member of Congress announcing each day whether they would attend or not, deal proponents seem to have spaced out announcements of support to provide momentum. Yesterday’s announcement: Sen. Patty Murray. [PressRelease] • Flashback: “On July 19th, NORPAC hosted Senator Patty Murray (D-WA) at the home of Rabbi Steven and Yael Weil in Teaneck. [JewishLink]

Coons to announce next week: “Delaware Sen. Chris Coons will announce his position on the Iran nuclear deal next Tuesday at the University of Delaware. We are assured he is still undecided, but his impending public announcement indicates there’s likely to be few, if any, Democrats that are still wavering when Congress comes back.” [Huddle] • Word on the street is Coons will likely announce his opposition to the deal. If he was announcing support, a simple statement would suffice. Watch Coons discuss the Iran deal with ABC47 News [YouTube]

“White House: Obama’s ‘Crazies’ Reference A ‘Little Too Flip’: White House spokesman Eric Schultz says Obama may have been “a little too flip” with his language, and adds that the president and Reid had discussed the legislative challenges they expect to face in the fall. Schultz says Obama was not talking about Iran.” [AP]

HAPPENING TODAY: Joe Biden hosts a conference call to discuss the Iran deal with members of the Democratic National Committee. “The call is an opportunity for Mr. Biden to emphasize his role in the Obama administration and to show off his foreign policy chops while keeping his name in the presidential conversation with committee members.” [FirstDraft]

“How to put some teeth into the nuclear deal with Iran” by Dennis Ross & David Petraeus:“Now is the time for the Iranians and the world to know that if Iran dashes toward a weapon, especially after year 15, that it will trigger the use of force. It is critically important for the president to state this clearly, particularly given his perceived hesitancy to use force. Indeed, were Obama to be unequivocal about the use of force should Iran violate its commitment not to seek nuclear weapons, the international community would accept the legitimacy of military strikes in response… The president’s letter to Nadler was useful but fell short of addressing our concerns.” [WashPost]

Max Fisher: “Dear groups that oppose the Iran deal: Here’s why you’re losing, and how to fix it” [Vox]

“Obama Must Engage the Iran Deal’s Critics” by William Galston: “He’s winning in Congress but losing public support, and that is where the deal’s fate ultimately lies.” [WSJ]

Colin Kahl: “How the U.S. and Our Allies Will Confront Iran’s Destabilizing Activities” [WH]

“Iran Deal Truthers” by Tom Nichols: “Late last week, the Associated Press found itself on the receiving end of a kind of Iran Deal “trutherism,” in which people upset by an AP report on one of the Iran Deal’s side-agreements have taken on the same role as the 9/11 “truthers” who were “just asking questions” about conspiracies. They’re not making direct accusations, but the implications are hard to miss. And like the 9/11 truthers, the conspiracies point to the country beloved by truthers everywhere: Israel.” [DailyBeast]

“David Duke on Trump: He’s ‘the best of the lot'” by Jeremy Diamond: “David Duke, the anti-Semitic former Ku Klux Klan leader, praised Republican front-runner Donald Trump for his immigration policy proposals and said Trump is “the best of the lot.” After ranting about “Jewish supremacy” and Jewish domination of the media, Duke took time out of two of his radio programs last week to talk up Trump’s candidacy…” [CNN; BuzzFeed]

Tevi Troy on 2016 — ‘most Jewish’ race: “Think about it,” said Troy. “Both leading candidates, Hillary Clinton and Donald Trump, have machatunim,” Jewish in-laws of their daughters. “It’s remarkable how little comment there is” on this phenomenon, Troy said. “The larger American society accepts this with nary a second thought. I can’t think of any other country where the leading candidates have machatunim — except Israel.” [NJJN]

ON THE HILL: “Congresswoman Asks For Investigation Into Israeli Shooting Of Two Palestinian Teens” by Jessica Schulberg: “Rep. Betty McCollum (D-Minn.) has requested the State Department open an investigation into whether the killing of two Palestinian teenagers last year by Israeli security forces warrants withholding of military aid under the conditions of the Leahy Law.” [HuffPost]

RISING STAR: Hakeem Jeffries, ‘Brooklyn’s Barack’ — by Farah Halime: “His pro-Israel stance, although favorable when he was first elected, has since divided Arab and Muslim constituents and diplomats. As of mid-August, he hadn’t made up his mind on the Iran nukes deal. Significantly, he hangs a Jewish blessing outside his office, given to him by a Jewish group he met with (in honor of the Russian Jews in his district, he says, skirting the Israel reference).” [Ozy]

TALK OF OUR NATION: “New Pew report highlights Modern Orthodox Jewry straddling two worlds” by Jared Sichel: “Just as Charedi Jews in the United States are likely to enroll their kids in a yeshiva, attend synagogue every week and vote Republican, so too are Modern Orthodox Jews. But also, just as non-Orthodox Jews in the United States tend not to marry before the age of 25, earn at least a bachelor’s degree and have a significant number of non-Jewish friends, so, too, do the Modern Orthodox. And unique among Jewish Americans, the majority of Modern Orthodox households earn at least $150,000 per year, and a large majority believe caring about Israel is essential to being Jewish (79 percent), and that the U.S. is not supportive enough of Israel (64 percent). In a report released to the public Aug. 26, the Pew Research Center looked deeper into the Orthodox segments of the survey data from Pew’s groundbreaking 2013 study of U.S. Jews.” [JewishJournal; Pew]

Are Jewish courts engaged in a religious activity or a civil exercise when hearing a case? A U.S. Bankruptcy Judge in White Plains, New York, Robert D. Drain, issued an opinion yesterday holding that it is a violation of the federal Bankruptcy Code to invoke the use of a Beis Din, or Jewish religious court, to attempt to dissuade some members of the Orthodox community from suing others as part of a Chapter 11 case. Judge Drain dismissed the possibility that his ruling, demanding the immediate end of the Bais Din proceeding, unconstitutionally interferes with the Free Exercise clause of the First Amendment. [Opinion]

Noah Feldman: “Arkansas, which is poised to erect a new Ten Commandments monument on the grounds of its state capitol, has just rejected a request by a Hindu group to erect a statue of the god Hanuman there. Constitutionally, the rejection is permissible. … Confused? I hope so.” [BloombergView]


**Good Wednesday Morning! Enjoying the Daily Kickoff? Please share us with your friends & tell them to sign up at [JI].  Have a tip, scoop, or op-ed? We’d love to hear from you. Anything from hard news and punditry to the lighter stuff, including event coverage, job transitions, or even special birthdays, is much appreciated. Email [email protected]**
BUSINESS BRIEFS: “Israel to Ask U.S. to Keep American Airlines Flying to Tel Aviv” [Haaretz] • “George Soros’ Fund Bought Teva Pharmaceutical Industries Stock — Again” [MotleyFool] • “NCH Capital’s Brazil Fund Manager Beating Peers Says Best Time to Buy in Years” [Bloomberg] • “Josh Kushner leads $35M round of funding for Greenhouse Software” [NYBJ] • “Adam Neumann’s WeWork Lays Off Nearly All of Its Office Cleaners After They Move to Unionize” [Gawker] • “Why a Manhattan Co-Op, on land owned by Rubin Schron & David Werner, has plenty of units for sale at a discount” [Bloomberg] • “Schottenstein’s $110 million Hyland-Croy Gateway District project grows by 45 acres” [Dispatch] • “Rebecca Minkoff shows DVF how tech fashion is done” [NYPost]

TRENDING: “Why the Rich Love Burning Man” by Keith Spencer: “Burning Man is earning a reputation as a “networking event” among Silicon Valley techies, and tech magazines now send reporters to cover it. CEOs like Mark Zuckerberg of Facebook and Larry Page of Alphabet are foaming fans, along with conservative anti-tax icon Grover Norquist… Tesla CEO Elon Musk even went so far as to claim that Burning Man “is Silicon Valley.” [JacobInMag]

STARTUP NATION: “This Israeli startup is solving the worst thing about the end of your holiday – pesky foreign currency” [TechInAsia]

SPORTS BLINK: “Curt Schilling suspended by ESPN after controversial tweet comparing Muslims to Nazis” by Steve Almasy: “The tweet re-posted a meme that reads: “It’s said only 5-10% of Muslims are extremists. In 1940, only 7% of Germans were Nazis. How’d that go?” The text was superimposed of a red-tinted photo of Adolf Hitler. At first Schilling didn’t back off from his post, but eventually he said it was wrong to post the meme.” [CNN; BleacherReport]

TALK OF THE TOWN: “Jewish Dating App ‘Tribe’ Seeks to Upstage J-Date” by Savannah Cox: “Ari Ackerman, a New York native and serial entrepreneur, launched a new dating app for Jewish singles in the city last month. This match limit (of 18), Ackerman says, is meant to encourage Tribe users to take the time to really check out other users and be more thoughtful in their search for love… “If [Tribe] can be a vehicle to put people in the same room so they can meet — and not virtually — then ultimately that’s a good thing. It’s smart,” Rabbi Dovi Scheiner said.” [DNAinfo]

“Neighbors demand end to killing of chickens in Jewish ritual” by Julia Marsh: “Feathers flew in Manhattan court Tuesday as a group of residents demanded that a judge stop the “unsanitary’’ Jewish religious ritual of slaughtering chickens on the sidewalk during [the period leading up to] Yom Kippur.” [NYPost]

“Soviet WWII Plane, Jewish Tombstones Found In Polish Rivers” by Monika Scislowska: “As river levels in Poland fall to record lows amid a prolonged drought, Jewish tombstones and a Soviet fighter plane with the remains of its pilots have been found in the riverbank, evidence of Poland’s tortured 20th-century history. Two weeks ago, a man walking along the river in Warsaw came across fragments of the tombstones with Hebrew lettering.” [AP]

LongRead: “Larry King Is Preparing for the Final Cancellation” by Mark Leibovich: “Five years after CNN pulled the plug on his show, the TV host is thinking about whom he’ll book for his funeral.” Highlights: “I despise eggs,’’ he told me, and added, by the way, that ‘‘Jews like things very well cooked. Did you know that?’’ (I did not.)…  A dark-skinned man approached and asked King if he would pose for a photo. ‘‘Where are you from?’’ King asked. ‘‘Saudi Arabia,’’ the man said. ‘‘I’m a Jew!’’ King informed him. ‘‘You sure it’s O.K. to get your picture taken with a Jew back in Saudi Arabia?’’… He showed me the items in his den, or ‘‘trophy room’’ — the cardboard cutout of Sinatra wearing Jewish payos… [NYTimesMag] • “Former CNN host and iconic American celebrity Larry King visits Israel for the first time in 20 years.” [JPost; ToI]

**Free gift idea: Know anyone who might enjoy receiving the Daily Kickoff? Share us with them and they’ll probably love you for it!**

If you enjoy reading Jewish Insider each morning, please consider supporting us with a donation to Tribe Media, our 501(c)(3) parent organization. 100% of your donation will go directly towards improving Jewish Insider. Thanks! [PayPal] 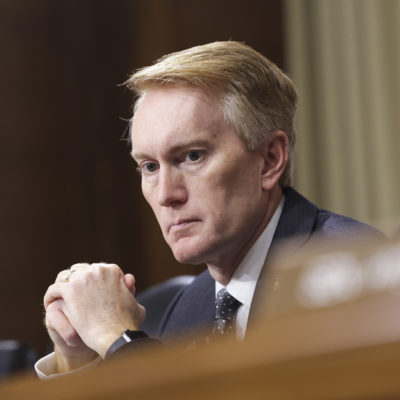