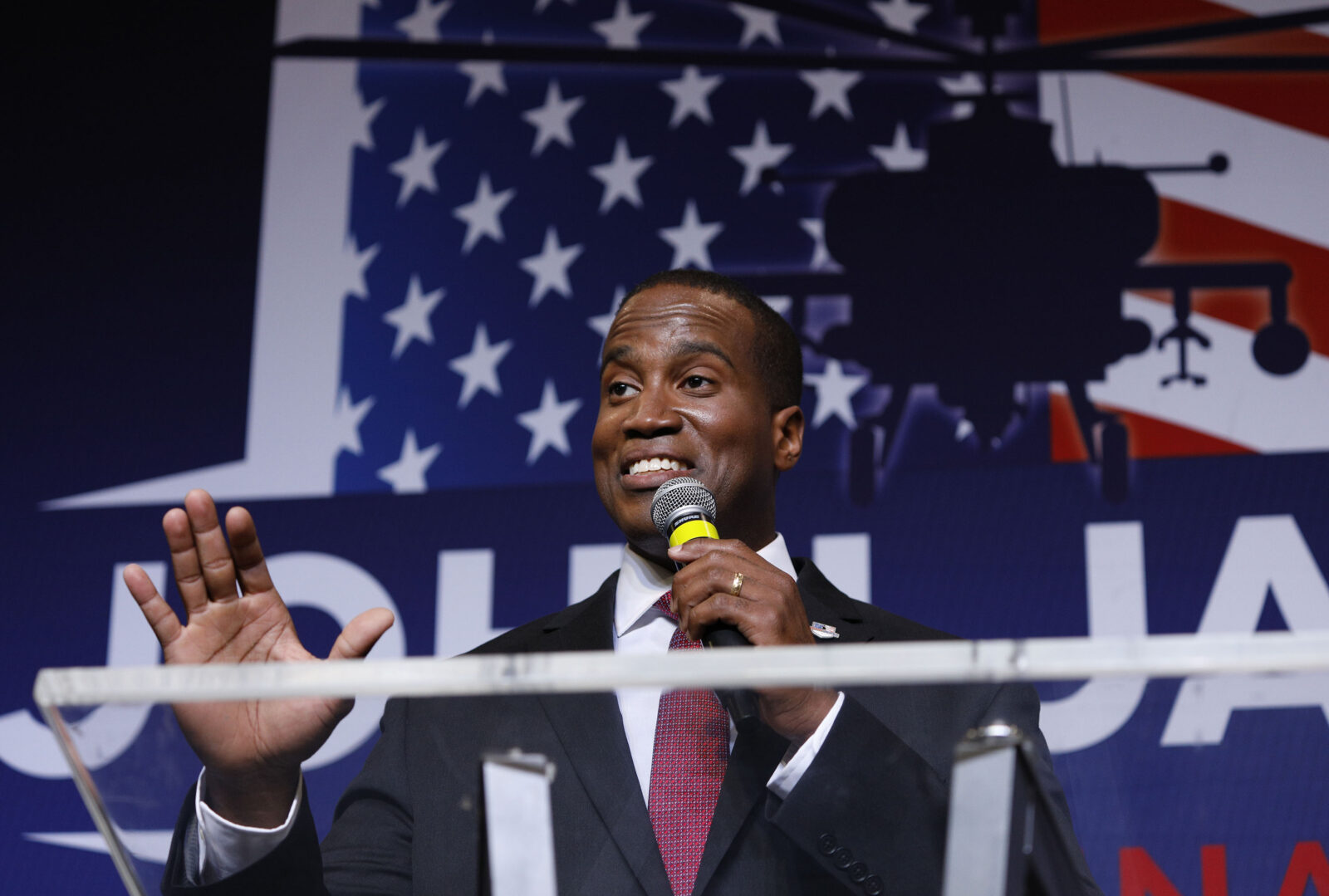 Newly minted rep, who castigated his hard-right Republican colleagues during the speaker-vote marathon, had suffered two defeats in bid for the Senate

Amid the drawn-out, days-long process to elect a new House speaker last week, Rep. John James (R-MI), a freshman from suburban Detroit, stood before Congress to deliver his first floor speech as he exhorted his colleagues to end the stalemate.

In an impassioned address prior to the seventh speaker vote, the newly elected Michigander invoked his personal biography as the Black son of parents who faced discrimination under Jim Crow, upbraided hard-right Republicans for stalling the election and concluded with an enthusiastic endorsement of Rep. Kevin McCarthy (R-CA), who had recruited James to run for Congress after two failed Senate bids.

His appeal fell short of persuading House Republicans to immediately hand the reins to McCarthy, who secured the speakership two days and eight ballots later. But there was little doubt that James, whose monologue was recognized as one of the few positive moments in an acrimonious deadlock where Republicans nearly came to blows, had made his presence known just days after arriving in Washington, D.C.

It had been some time coming. The Iraq War veteran and businessman has sought elective office almost continuously since 2017, when he launched his first unsuccessful Senate campaign. Following his second consecutive bid for the upper chamber, James ultimately set his sights on the House and narrowly claimed victory this past November.

“I am looking forward to getting down to work for the people,” James said in a statement after he and his House colleagues were finally sworn in last Saturday. “They elected us to speak for them and to turn this country around.”

A spokesperson for James’ office said the congressman was unavailable for comment on Thursday.

The newly elected congressman became Michigan’s first Black Republican congressman when he assumed office earlier this month, and he has frequently spoken of his experience as a Black conservative who, by dint of his own family history and upbringing, is attuned to issues of racial injustice.

“I grew up listening to NWA and Tupac and now Kendrick Lamar and Donald Glover,” James said in an interview with Jewish Insider when he ran against Sen. Gary Peters (D-MI) in 2020, losing by just under two percentage points. “You listen to Sam Cooke talk about ‘change is gonna come’ — well, what kind of change? We’ve been talking about this for generations, and the politicians that we continue to send back to Lansing and Washington have done precious little to fix the situation that we find ourselves in right now as a people.”

His election alongside freshman Rep. Wesley Hunt (R-TX), a fellow Apache pilot and West Point alumnus, helped double the number of Black Republicans in Congress. In a statement to JI, Hunt described James as a “friend” and “conservative fighter” who will “make an excellent congressman for Michigan’s 10th Congressional District,” which covers parts of Macomb and Oakland counties.

The feeling is mutual. In an interview with JI last spring, James said he was eager to serve with his “buddy Wes,” noting that he and Hunt would be the first Black West Point graduates elected to Congress.

Listing his priorities in the statement to supporters last weekend, James pledged to “end the growth of government” while vowing to cut IRS funding, “secure our energy independence,” “ban the sale of petroleum from our strategic reserves to China” and “address the crisis at the border.”

Though he earned support from former President Donald Trump, it had occasionally seemed as if James was struggling to chart his own path as a moderately tempered Republican candidate in a party where electoral success has at times hinged on loyalty to its de facto leader.

But if James was caught in what one political observer described to JI as a “Republican bind,” that predicament changed somewhat during the midterms as Trump’s sway among GOP voters appeared to slacken.

In the interview with JI last May, before he had clinched the Republican nomination, James was particularly energized as he stood well poised to win the primary and claim the open House seat in Michigan’s Lower Peninsula.

He said he was simply having “more fun” than his previous Senate bid, which had overlapped with the beginning of the pandemic. “I couldn’t look people in the eyes, I couldn’t hug them, I couldn’t reassure them when they were crying,” he said. “I couldn’t do that from behind a Zoom link.”

“I’m having more fun talking and engaging with people, whether it’s on a shop floor or in a park or in a diner,” James said. “There’s no substitute for being able to look someone in the eye and be able to earn their trust.”

Sheldon Yellen, a business executive and pro-Israel activist in Detroit who has long supported James, said the congressman has a “charisma about him that just invites you in.”

“He came up to me one day, I was at a basketball game,” Yellen recalled in an interview with JI. “He comes up from behind me and grabs me and gives me a kiss on the cheek. That’s what we need, someone who puts it on the sleeve. That’s a real guy.”

“I didn’t give him enough money to warrant the kiss, by the way,” he quipped.

The first-term Republican cast himself as a strong supporter of Israel and said he would stand with the country while in Congress. “There must be no public space between the United States of America and Israel,” he told JI. “We need to make sure that Israel maintains its economic and military dominance in the region. That is without question.”

James said he would “support any and all efforts to build on the success of the Abraham Accords” as well as the Israel Relations Normalization Act, which seeks to bolster the agreements that normalized diplomatic relations between Israel and a number of Arab nations.

He also expressed opposition to pursuing nuclear negotiations with Iran, which “can hit Israel with standard munitions,” he averred. “Make no mistake about it.” The Islamic republic is “building ICBMs to hit us,” James told JI, referring to intercontinental ballistic missiles. In that respect, among others, Israel and the U.S. “have shared interests,” he said.

The war in Ukraine, he added, has underscored the broader importance of backing imperiled allies. “What we see in Ukraine is just the beginning of communist ambitions,” James argued. “We need to make sure that we work with our allies to assist them to deal with the Russian threat — and that, of course, matches what we should be doing with Israel.”

“The guy is all-in,” said Yellen. “He’s pro-Israel. And he has a choice, just like everybody. He doesn’t have to take that position. He takes it, and I think he takes it proudly.”

In conversation with JI last May, James said he would be “an outspoken critic” of the Boycott, Divestment and Sanctions movement targeting Israel as well as an “outspoken critic of antisemitism” and “a friend to pro-Israel and pro-Jewish causes.”

“I support any and all efforts to combat bigotry, hatred and in particular antisemitism,” James said. “I have the support of many Jewish leaders in our community, and I’m excited to continue to learn and see how I can be an asset and benefit. I’m looking forward to a long, positive relationship.”

The same day he delivered his floor speech late last week, Sen. Debbie Stabenow (D-MI) — whom James had challenged in 2018 — announced that she would not seek reelection next cycle, setting the stage for a potentially crowded race to succeed her. Among the names floated as possible candidates was James. He has not commented on whether he will run for the seat.

It isn’t hard to imagine that, after five years campaigning for federal office, the new congressman might prefer to avoid such speculation and focus on his job, at least for the moment.