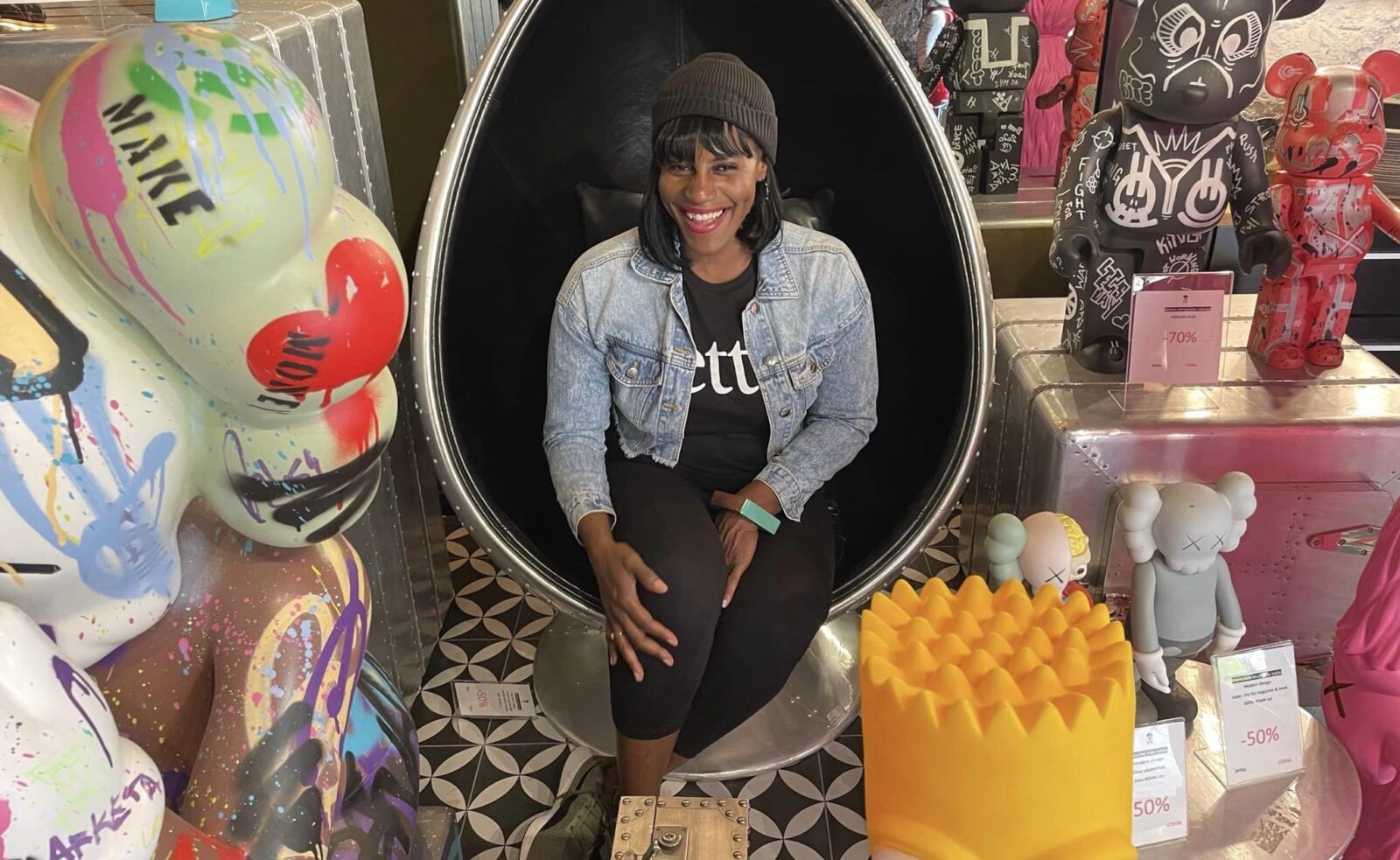 A hip-hop artist in the Holy Land

As a ‘music ambassador’ with the U.S. State Department, Mahogany Jones uses rap and poetry to build bridges among Jews and Arabs in Israel

Over the years, eager diplomats from around the world have come to the Holy Land, hoping to be the ones to finally make peace between Israelis and Palestinians.

Earlier this month, a very different kind of ambassador landed on the shores of the Mediterranean: Mahogany Jones, a hip-hop artist who for the past decade has served as an American music ambassador, traveling to conflict zones around the world to teach lessons on hip-hop, art and activism on behalf of the United States.

She toured in Israel for a week, leading workshops and playing in concerts that brought together hundreds of Jews, Muslims and Christians — both on the stage and in the audience. She played shows in Nazareth and Jerusalem with System Ali, a Jaffa-based band whose members are a mix of Palestinian and Jewish citizens of Israel.

One day, when leading a workshop in Haifa, she heard the sound of live music outside and left her perch to freestyle with the klezmer band that was playing on the street.

“I was doing my workshop, but all of a sudden I hear this magical music,” Jones recalled in a Wednesday phone interview with Jewish Insider. “I take a break and I peek outside and I see, like, this tuba, and I see an accordion and instruments. I’m like, ‘What is going on?’” Her drummer slipped outside to check out the scene, and she sent some of the people in her workshop to ask the musicians if she could join in.

“They’re like, ‘Hey, come on.’ We’re rapping. It’s going down. They’re playing klezmer,” Jones continued. Even though she came up in New York’s spoken-word scene two decades ago, at the same time as artists like Talib Kweli, Mos Def and Erykah Badu, this was her first impromptu street performance. “It took me — I lived in New York City. Street performance happens all the time. I was too chicken. I come all the way across the globe, with a klezmer band, it’s not fazed by a hip-hop street performance.”

Jones, 44, first gained attention for her music more than two decades ago, when she won BET’s “Freestyle Friday” program four times in a row. Her newest album, “Better,” came out last month. But throughout her career, Jones became best known for her activism (what she calls “artivism”) around the world and in Detroit, her adopted hometown.

She has been to 16 countries with the State Department, including Bosnia, Uzbekistan, Iraq and Finland. She works with local populations that are experiencing tensions or distrust, like in Israel; she also arrives in these countries as an American goodwill ambassador, to help people trust the embassy and the U.S. government personnel who are there to offer services to them.

“A lot of times people may be intimidated or not comfortable with coming to the U.S. Embassy and my role is being, like, ‘Hey, I’m human too, and a lot of the negative misnomers that you have about what Americans are like, I’d like to just, in-person, dispel those,’” said Jones. She wants to help young people feel free to express themselves, to be who they are and to feel a sense of comfort and belonging.

“You do programs like this with artists like Mahogany Jones, who has done this in so many different difficult spaces, because they’re able to bridge those divides and create that safe space in which different actors can share their culture, can share who they are,” said Paul Rockower, who used to lead Next Level, the State Department program that uses hip-hop to foster cross-cultural connection, and is now the executive director of the Jewish Community Relations Council of Greater Phoenix.

A short documentary film from Jones’ time in Sarajevo shows her animatedly leading a group of teens in a call-and-response: “I love … hip hop!” It’s the first day of the program, and they’re smiling but tense; by the end of the program, two weeks later, they’re freestyling and dancing in an onstage performance.

“The tools in my bag that I can share with you, you can use them to be free, be comfortable. You may not be the next Eminem or whatever, right? But you get an opportunity to express yourself, to be more comfortable with yourself, to express and talk about things that matter to you in ways that matter, whether that’s through poetry or whether that’s through rap,” said Jones. “I want to share that with you.”

Jones was invited to Israel by Polina Levy Eskinazi, in the embassy’s cultural affairs unit. The trip was supposed to take place nearly three years ago, but the COVID-19 pandemic intervened.

“We were looking for an amazing American artist who is also an educator, who can easily connect with diverse audiences and with young people. All these led us directly to Mahogany Jones,” Eskinazi told JI.

In Israel, Jones worked mainly with educators to teach them the skills to bring hip-hop and poetry to their students.

Participants in workshops included Jews and Muslims, Christians and Druze, religious and secular Israelis, men and women, and people from different economic backgrounds. The American Embassy’s intention in organizing Jones’ tour was to “create a better society that is more tolerant and respectful and therefore more democratic, resilient and strong.”

This trip was doubly meaningful for Jones, a Christian, who got to visit religious sites she had read about since childhood.

“I knew it was going to be spiritually moving for me. I didn’t know that it was gonna be fun,” said Jones, who had never traveled to Israel before. “It was beautiful. Everyone was so open. Everyone was just so gracious. Of course the food was incredible. Haifa was like Brooklyn on steroids. Tel Aviv was like, I don’t know, like L.A. meets Amsterdam meets all of your favorite places in the world, like rolled up into one.”

She saw the beauty of a small, ancient place where the world’s three religions commingle, where any random date tree might have biblical significance and every stone could be an archeological wonder. But it was “sobering,” too, Jones added, seeing and feeling the tension there.

“Here I am in Nazareth, and it’s 6 o’clock. It’s December. There’s a huge Christmas tree. I’ve just passed the nun, I just passed a monk. And I’m listening to the [Muslim] call of prayer, and five minutes ago, I saw somebody just pull out their [prayer] mat,” she recalled.

“To see that and to be, like, man, what’s wrong with us, we can’t figure it out? ‘I live on this side of my beliefs, I live on that side of my beliefs.’ But hey, we’re all on the same side, and we’re all sharing space,” she noted. “It’s complicated, but every day we are doing what we need to do to figure it out, and to honor our traditions and to honor who we are, and to somehow still figure out how we’re going to do life together.”