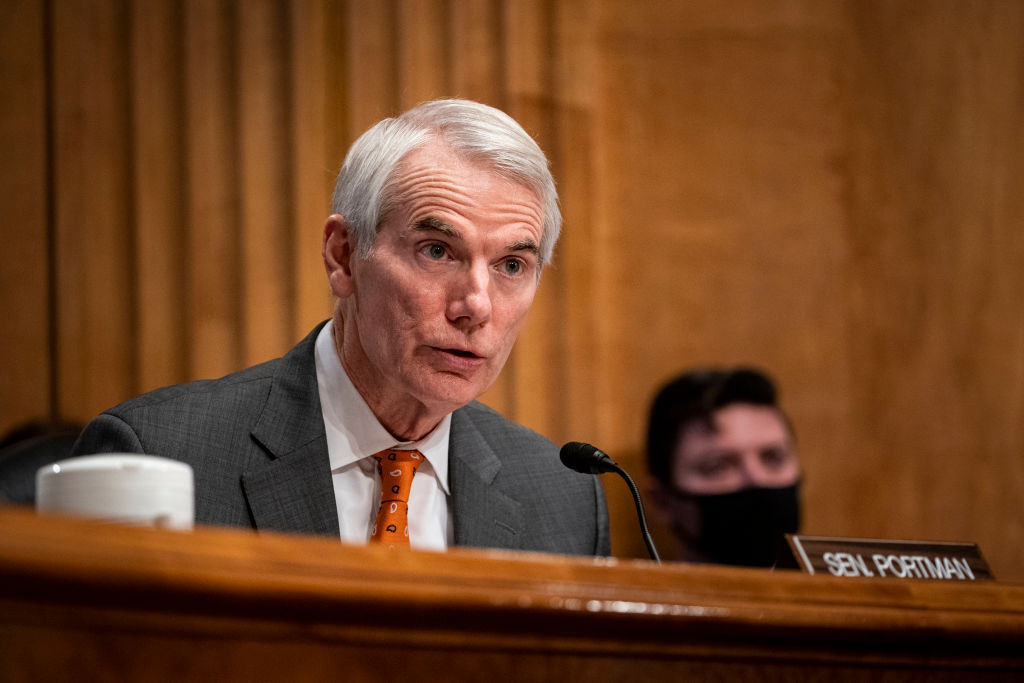 Sen. Rob Portman (R-OH) speaks during a confirmation hearing for Shalanda Young, director of the Office of Management and Budget nominee, on February 1, 2022, in Washington, D.C.

As lawmakers scramble to finalize the 2023 National Defense Authorization Act, the annual mammoth defense and national security policy bill, before the end of the year, advocates inside and outside of Congress are pushing for the bill to include amendments aimed at protecting religious institutions and combating extremism. The bill could come up for a vote in the House as early as next week.

Talks are ongoing over wrapping the Nonprofit Security Grant Program Improvement Act and the Pray Safe Act into the bill, the top Democratic and Republican lawmakers on the Senate Homeland Security and Government Affairs Committee told Jewish Insider on Thursday. The Nonprofit Security Grant Program Improvement Act would recommend an increase in funding for the program and establish a dedicated office at the Department of Homeland Security to manage its implementation, while the Pray Safe Act would set up an online database of information on safety programs and grants for nonprofits.

“We just had a meeting on it today,” Sen. Rob Portman (R-OH), the ranking member of the Senate Homeland Security and Governmental Affairs Committee, said. “I feel pretty good about it… I hope we’ll get both of them in. The Nonprofit Security Grant Program might have a little more support from others. I really want to get these done before I retire, which is going to happen at the end of this session.”

Portman explained that some colleagues have raised concerns about the recommended funding level, $360 million, for the NSGP, which he argued is “a relatively small amount compared to the protection it provides.” The $360 million target in the bill, as amended by the Senate, would not be binding.

Opposition to the Pray Safe Act, Portman continued, stems from the fact that “it’s a little bit newer, it hasn’t been socialized as much,” and its impacts have not yet been seen in action.

“When you have these massive ‘must-pass’ packages, everybody’s looking for an angle to get their [priority] in,” Diament explained. “In all the sort of machinations of the NDAA, sometimes, sometimes non-controversial things are used as leverage points by [lawmakers] who are trying to get some others [priorities] in. And that other [priority] may or may not be controversial.”

Diament said that this has been an issue “less so” with the NSGP legislation, which he believes is on track to be included in the bill after concerns raised by one senator were, to Diament’s understanding, resolved.

Rabbi Abba Cohen, vice president for government affairs of Agudath Israel of America, told JI that, on the NSGP legislation, “our understanding now is that key players have come to an understanding and that the matter has been resolved.” Cohen was less sanguine about the Pray Safe Act, noting that “the reports we’re hearing from sponsors” of the legislation “are not positive and it’s doubtful it will be in the final bill.”

He added that Agudath Israel plans to continue to monitor both bills should there be further issues with the NSGP bill or if opportunities arise to revive the Pray Safe Act.

Ryan Greer, the national security director and chief of staff for government relations at the Anti-Defamation League, noted to JI that both bills have been included in prior drafts of the 2023 NDAA.

“We’re optimistic that they could [be included], we don’t know that they will,” Greer said. “We’ve heard things frankly all over the map, it’s just kind of gone behind the scenes, and right now, we’re not sure what’s going to end up in the final version.”

Elana Broitman, the senior vice president for public affairs at Jewish Federations of North America, told JI that JFNA has also been “working to ensure” that the NSGP legislation passes in the current Congress.

Other amendments to the bill approved by the House and broader efforts to fight extremism within the Department of Defense are also in question.

The DoD released a report late last year on countering extremist activity inside the armed forces, which included policy changes prohibiting involvement with extremist activity and expressed a need to continue tackling the problem. The report found 100 cases of extremism among over 2 million armed service members, although a 2020 outside survey found racist and white nationalist sentiments were much more widespread in the military.

The Senate Armed Services Committee narrowly voted to add non-binding language to a report accompanying its version of the 2023 NDAA urging the DoD to “immediately” stop these efforts to “combat exceptionally rare instances of extremism.” The report calls this work “an inappropriate use of taxpayer funds.”

Sen. Angus King (I-ME), who caucuses with Democrats, voted with committee Republicans in favor of the language. He has not publicly explained his vote.

“The Department of Defense said, ‘We have a problem we want to look into,’” Greer said. “To then have members of Congress turn around and say, ‘Don’t look into a national security threat that you want to look into,’ is bizarre, and frankly, frightening.”

The House-passed version of the NDAA also requires reports from the Defense Department to Congress on the threat of white supremacist domestic terrorists, the threats posed by antisemitism, the results of investigations of antisemitism within the military and the use of social media by terrorist groups.

It also mandates an interagency strategy on combating white supremacist and neo-Nazi activity in federal law enforcement and the military, and reinforces previous requirements for reports from the intelligence community on domestic terrorism that the executive branch has failed to fulfill.

Republicans have broadly argued that Democrats have over-emphasized the prevalence of extremism in the military and federal government, and claimed efforts to combat it target conservatives for their political views and constitute “wokeness.”

ADL’s Vice President for Government Relations, Advocacy and Community Engagement Max Sevillia wrote to House and Senate leaders last week urging them to maintain the House amendments related to extremism and not cut off the DoD’s counter-extremism efforts.

“While we agree with the Senate Armed Services Committee’s assertion that ‘the vast majority of servicemembers serve with honor and distinction,’ even a small number of unchecked extremists in the ranks is a stain on the credibility of America’s armed forces and can cause harm far disproportionate to their number,” Sevillia wrote. “The threat of extremism to the armed forces and uniformed services is too important to be left unaddressed.”

ADL’s Greer told JI that counter-extremism programs seem to be in jeopardy in the ongoing negotiations.

“We are getting signals that make us very, very concerned that Congress is going to leave these issues on the chopping block, and will kind of move on with[out] any of the provisions that address extremism within the ranks or prepare the national security community to deal with these types of threats,” he said.

Following the Senate’s recommendation to halt counter-extremism work would allow the issue to “fester,” Greer said, and potentially provide extremist groups leeway to pick up valuable recruits with credibility, military skills and knowledge of classified information. Allowing those who adopt extremist ideologies to remain in the military could also disrupt unit cohesion and discipline, he continued.

Greer argued that a small number of military-trained domestic terrorists can cause outsized harm.

“To say that [it] is a very few number of people doesn’t make sense when you think of it from a risk perspective,” he said. “Domestic terrorism, insurrection, and veterans and people with military skills participating in [those activities] is a high-severity problem. It’s low probability, because the vast majority of veterans and of members of the military are upstanding patriots, but low probability times a huge number of people is still a noticeable threat.”

Even if the provisions are preserved in the 2023 NDAA, supporters of counter-extremism efforts at the Pentagon are likely to face a steeper uphill battle in the new year, under a GOP-controlled House and a Senate that will continue to be narrowly divided.

Greer said the upcoming change in power highlights the need to advance these provisions before the end of the year, but added that he is “cautiously optimistic about the next Congress taking on these challenges,” explaining, “we’ve worked constructively with a lot of offices on both sides of the aisle.”