Nearly two dozen Senate Democrats huddled with an array of U.S. Jewish leaders on Capitol Hill yesterday, in a meeting that touched on a series of hot-button issues 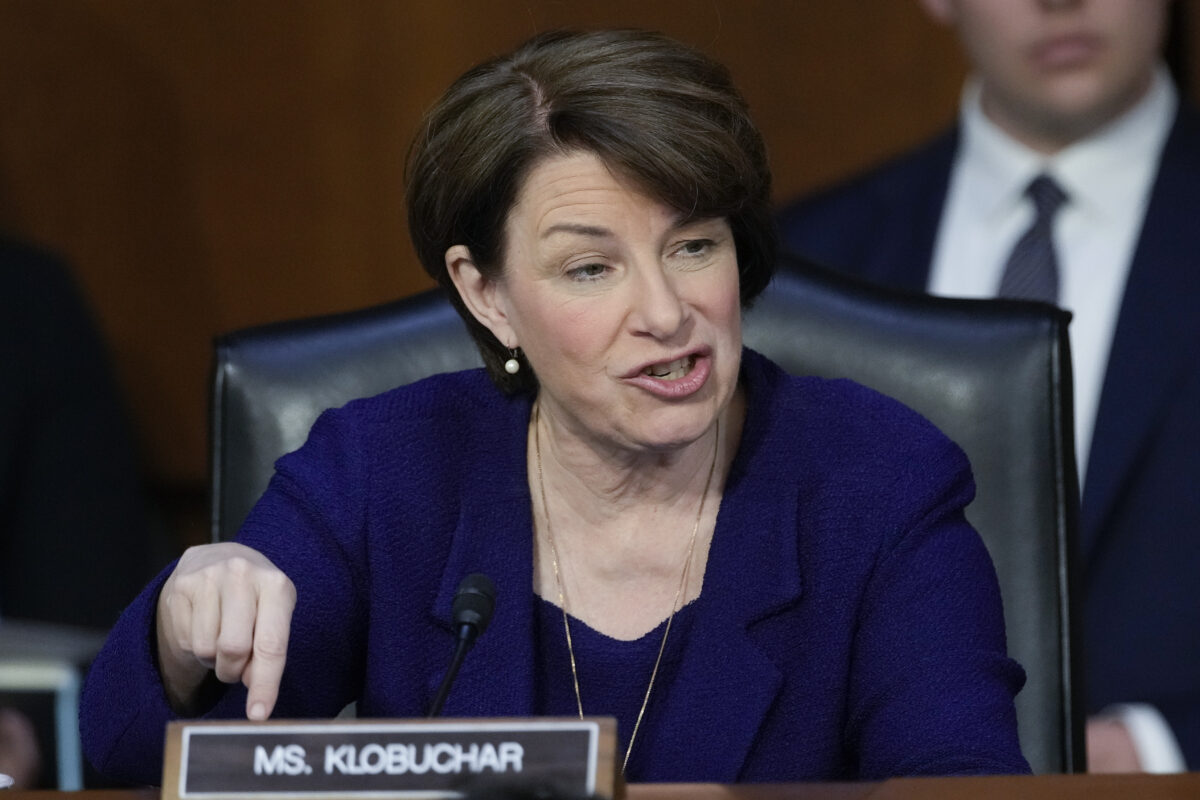 Two dozen Senate Democrats huddled with leaders of around 20 U.S. Jewish groups on Capitol Hill on Wednesday, addressing a range of hot-button issues in the U.S.-Israel relationship and the Jewish community, as well as on Capitol Hill, as Israeli Prime Minister-designate Benjamin Netanyahu works to form the next government.

The meeting, an annual occurrence prior to the pandemic, was organized and led by Sen. Amy Klobuchar (D-MN) in her auspices as the chair of the Democratic Steering and Outreach Committee.

“While there may be challenges at any given time, we must not lose sight of the importance of this very special bond,” William Daroff, the CEO of the Conference of Presidents of Major American Jewish Organizations told the assembled lawmakers in his opening remarks. “We encourage lines of communication between governments to be robust and for disagreements to be conveyed privately – away from the bright lights of those who seek to damage the connection between our two countries.”

An attendee and another source familiar with the proceedings said that leaders from some groups on the left differed from mainstream leaders in advocating a harder-line approach to the new Israeli governing coalition, which is set to include several ministers from the Israeli far-right.

Some of the organizational heads called on Democratic legislators to publicly apply pressure on Israel, while mainstream leaders urged senators to keep disagreements behind closed doors, the two sources told Jewish Insider.

Susie Gelman, the chair of Israel Policy Forum, told JI she “expressed grave concern about some of the extremist, right-wing elements in the incoming government coalition, the responsibilities that they are being given and the threat, long term, to the two-state solution.”

An attendee said Sen. Bob Menendez (D-NJ) was the only lawmaker who spoke specifically about the new government, which has yet to be finalized.

Two attendees and a third individual familiar with the proceedings told JI that Menendez explained to the assembled leaders that he had expected a conversation he had with Israeli Prime Minister-designate Benjamin Netanyahu, in which he warned him that forming a government with far-right Jewish parties would negatively impact the U.S.-Israel relationship, to remain private — but it was leaked, and publicized by Axios. Menendez said he was not responsible for the leak.

Menendez did not respond to a request for comment.

Overall, an attendee who had attended prior meetings called it “the most productive and positive meeting that they’ve had.”

Two attendees said that Senate Majority Leader Chuck Schumer offered specific kudos to groups that had been supportive of former President Donald Trump’s policies in the past for condemning Trump’s meeting with rapper Kanye West and white supremacist Nick Fuentes — echoing remarks he made on the Senate floor earlier this week.

Lawmakers in the room urged the assembled groups to reach out to Republican lawmakers to urge them to pass an omnibus spending bill and a National Defense Authorization Act in the few remaining weeks before the end of the current Congress, other attendees told JI.

Those expansive bills are set to include key Jewish community priorities such as security aid to Israel and increased funding for the Nonprofit Security Grant program. Nathan Diament, the executive director of the Orthodox Union Advocacy center, told JI he urged lawmakers to fully fund the NSGP in his remarks.

Daroff also warned the lawmakers about the threat from Iran and urged the senators to “continue its oversight role” over any agreement with the regime.

The American Jewish Committee — represented at the meeting by Chief Policy and Political Affairs Officer Jason Isaacson, per an attendee list obtained by JI — encouraged increased support for Arab-Israeli normalization.

“We told the senators that the newly forged ties not only create mutually beneficial partnerships but also push back against extremism and the aggression of Iran while offering tools to ease and ultimately resolve the Israeli-Palestinian conflict,” the group said in a statement to JI.

AIPAC was represented in the room by the group’s CEO, Howard Kohr, according to the attendee list.

“We appreciated the opportunity to present our views on advancing the U.S.-Israel relationship and building closer cooperation in a range of areas between the two allies,” AIPAC spokesperson Marshall Wittmann told JI.

Antisemitism was also a prime topic at the meeting. Sheila Katz, the CEO of the National Council of Jewish Women, told JI that she was grateful for the high turnout of senators amid a national spike in antisemitism.

“The amount of senators that showed up to hear from leaders of the Jewish community in this moment was a sign of their care on antisemitism in particular and being in solidarity with us as we’re navigating this [moment],” Katz said.

“Political leaders must use their bully pulpits to condemn, confront, and combat antisemitism and all forms of hate and extremism,” Sevilla said. “We welcome the Senate Democratic Steering and Outreach Committee organizing a discussion with leaders from the Jewish community to discuss this rise in antisemitism and appreciate that this issue is being taken so seriously at the highest levels.”

Democratic Maryland Gov.-elect Wes Moore, who was on the Hill for a meeting with Cardin, also stopped into the meeting and said a few words to the leaders assembled, an attendee told JI.