The Israeli president shared his vision for a ‘Renewable Middle East,’ where countries in the region work together to develop climate solutions for the rest of the world 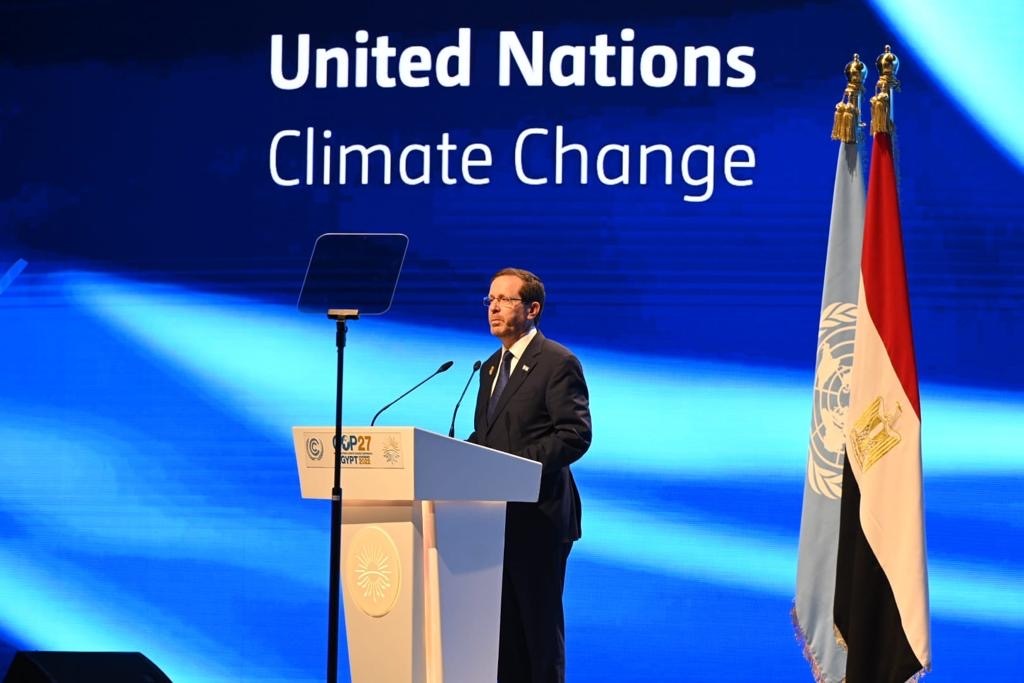 SHARM EL-SHEIKH, Egypt — With the message that Israeli technology can provide solutions to tackling the climate crisis in the Middle East and beyond, Israeli President Isaac Herzog inaugurated the Jewish state’s first-ever pavilion at the annual United Nations Climate Change Conference, COP27, in the Egyptian resort town on Monday.

Showcasing Israeli technology that deals with the fields of water scarcity, renewable energy, agricultural and desertification solutions, alternative proteins and more, a delegation of more than 700 people – from seven different Israeli government ministries, a dozen commercial companies and startups, as well as a variety of experts in the field of climate change – worked together to create the pavilion. It is the first time in 40 years that Israel has such a presence at an international event in Egypt.

Dedicating the booth, Herzog, who was warmly welcomed to Egypt by President Abdel Fattah el-Sisi, told members of the Israeli delegation that every crisis also provided opportunities and that Israel can leverage its position as a leader in environmental technology fields in order to build relations with other nations.

The president expanded on this concept during his address at the opening of the conference, coining the term “Renewable Middle East” and sharing with world leaders his vision for a world where countries in the region work together to develop solutions that “will be available for export to Europe, Asia and Africa.”

“With studies forecasting imminent, severe consequences for our region, the Middle East is on the brink of catastrophe,” Herzog stressed. “Here in Sharm el-Sheikh, I wish to reiterate the State of Israel’s solid commitments to achieving net zero carbon emissions and to transitioning from fossil fuels to renewable energy by 2050.”

Ambassador Amir Weissbrod, head of the Bureau for International Organizations in Israel’s Ministry of Foreign Affairs, said that Israel’s presence at COP27 would not only showcase solutions to the global crisis but could also build practical cooperation with other countries.

He highlighted that on Tuesday, Israel’s outgoing minister of regional cooperation, Isawi Frej, will sign a crucial memorandum of understanding with representatives of the UAE and Jordan laying the groundwork for creating solar energy fields in Jordan. The MOU furthers a 2021 landmark declaration between the countries to build renewable electricity and water desalination options.

Even as Israel tries to promote its achievements in addressing the climate crisis, some local environmental entrepreneurs and green activists say the country has not done enough and there is a growing fear that the incoming government, most likely to be the most ideologically right-wing, religious that the country has ever had, will make it even less of a priority.

Herzog, who attended the conference in place of outgoing Prime Minister Yair Lapid – who canceled his participation following last week’s election results – told journalists at the start of the visit to Egypt that the “battle to save Planet Earth’s climate” was extremely important and would remain a top priority for Israel.

He said that he would use the summit to assure world leaders, and especially those in the immediate region, of Israel’s commitment to doing its part to “save humankind.”

During the conference, the president met with other regional leaders, including UAE President Sheikh Mohammed bin Zayed Al Nahyan, Morocco’s Prince Moulay Rachid, and Jordan’s King Abdullah to discuss climate change and solutions, as well as other matters. Herzog also met with the newly inaugurated U.K. Prime Minister Rishi Sunak, as well the leaders of Chad, Finland, Belgium, Norway and the Czech Republic.