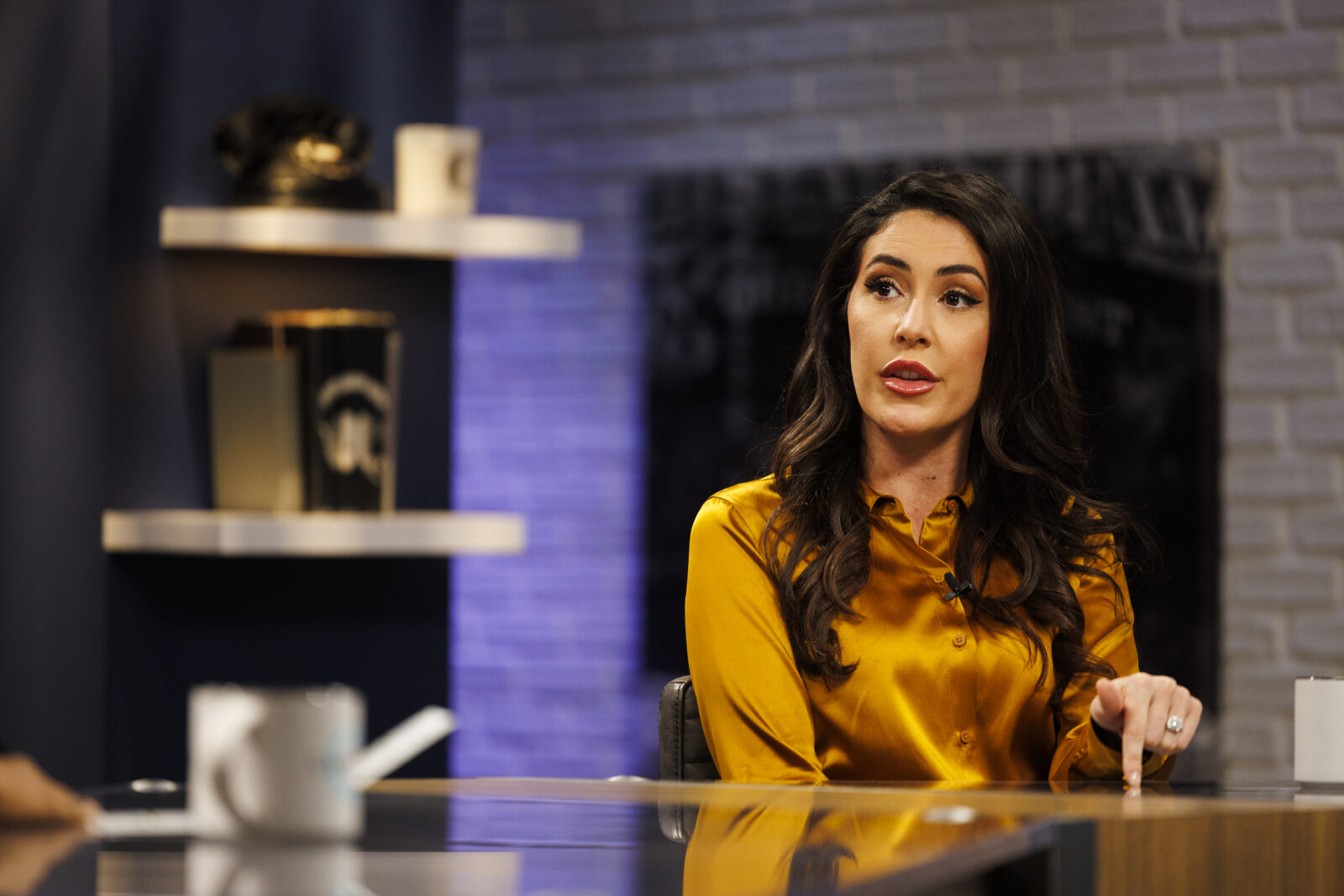 Conservative activist Anna Paulina Luna has made election integrity central to her bid to represent Florida’s 13th District. Her Democratic opponent says election deniers on Jan. 6 prompted him to run

The firebrand first-term congresswoman has faced condemnation from across the political spectrum for a series of remarks viewed as offensive by a wide swath of Jewish community leaders.

In an interview with Jewish Insider on Tuesday, Luna, who is running to represent Florida’s 13th District, stood by Greene and argued that her past comments may have been taken out of context, and that her support for Israel suggests she is not antisemitic.

“MTG did endorse me, and I was raised as a Messianic Jew by my father,” said Luna, who added that she identifies as a Christian. “I am also a small fraction Ashkenazi. If she were antisemitic, why did she endorse me?”

Luna argued that she would not associate with someone who is antisemitic. “I in no way, shape or form would ever put myself in a position where I’m hanging out with someone like that, and so I just don’t see that Marjorie Taylor Greene is that person,” said Luna, who is 33. “If I see it happening on the right, I’m the first person to condemn it and say, like, ‘Hey, that’s not cool. I don’t align with that.’”

Luna’s embrace of Greene and of conspiracy theories about 2020 election fraud set up a sharp contrast with her Democratic opponent, Eric Lynn, a pro-choice former Obama administration official who is Jewish. Luna first ran for the seat in 2020 and lost to then-incumbent Rep. Charlie Crist (D-FL), who vacated the seat this year to run for governor.

Following redistricting, the St. Petersburg-centered district became significantly more favorable to Republicans. But a late October poll shows that Luna is running neck-and-neck with Lynn, a national security professional who served in the Department of Defense in former President Barack Obama’s administration. Luna has stuck to her hard-right messaging from the primary, while Lynn has tried to tack to the center to win over undecided voters.

Former President Donald Trump is Luna’s most prominent backer. She has also been named to the National Republican Congressional Committee’s list of “young guns” and endorsed by Florida Gov. Ron DeSantis.

Despite Luna’s ties to Greene, pro-Israel groups in the center and on the right have avoided getting involved, although the pro-Israel community in St. Petersburg, where the district is centered, appears split on the race. A PAC affiliated with the Republican Jewish Coalition, which has tried to unseat Greene, did not endorse Luna. The group’s executive director did not respond to a request for comment on Tuesday.

Some AIPAC activists in the district recently held a fundraiser for Luna, although the pro-Israel organization’s political action committee has not endorsed either candidate in the race. “The pro-Israel community has been involved in both sides in this race,” said a person with knowledge of the race. Democratic Majority for Israel PAC endorsed Lynn, as did the Jewish Democratic Council of America.

As a senior advisor at the Defense Department, Lynn, who is 42, worked closely on the development of Israel’s Iron Dome missile-defense system, and he pledged to support U.S. assistance for Israel while in Congress at a time when far-left opponents of Israel have gained a foothold in the Democratic Party.

“I will not be shy about my views or my criticism of those that oppose support for Israel,” Lynn told JI on Monday. “Should there be antisemitism within the progressive wing of the Democratic Party, then I will speak out against it. It is something that must be addressed, must have a light shone on it. And we must continue to stand up against all forms of hate, including antisemitism.”

Luna also pledged to support the U.S.-Israel relationship as a member of Congress. “We as a country need to ensure that our allies, especially those in the Middle East sector, are basically well-equipped to do what they need to do in an effort to make sure that there’s a mutually beneficial and national security relationship,” she said. “The Israeli intelligence community is unparalleled. I think that right now, with what we’re facing with China, Iran and Russia, maintaining that symbiotic relationship, I think, is very important, and so I do support Israel.”

When asked how she would combat antisemitism as a member of Congress, Luna, an Air Force veteran, said there needs to be “cultural education” to combat what she described as the media’s double standards. “There’s a big problem with our media, and then also the double standards that exist from political ideologies,” she said.

In a tweet last year, Luna claimed the Food and Drug Administration hoped to compile a “Nazi Germany registry” of “unvaccinated Americans.”

“I’m extremely, extremely distrusting of any database and/or process that forces individuals to bow and cower to, I think, the gross overreach of the federal government. And so I think that that analogy is something that should be taken seriously and looked at from a historical perspective,” she explained.

Greene has made similar comments. In March 2021, Greene compared House of Representatives mask rules to the Holocaust, which House Minority Leader Kevin McCarthy (R-CA) called “appalling” at the time.

Earlier this year, Greene spoke at the America First Political Action Conference, which was organized by Nick Fuentes, a white nationalist and Holocaust denier. She also faced censure in the House of Representatives for tweeting a doctored image that presented President Joe Biden with a Hitler mustache. Luna declined to comment on either incident.

Greene has a history of sharing conspiracy theories on social media, including in one 2018 Facebook post in which she suggested that the Rothschild family controlled lasers in space that caused destructive wildfires in California — a theory believed to be rooted in antisemitic notions about the Rothschilds, who historically were a prominent banking family.

Luna pointed to Greene’s later comments that she didn’t know about the Rothschilds’ connection to Judaism. “I actually haven’t heard her make antisemitic comments. I can also tell you that from what I have gathered, and from what I’ve seen, some of her statements may have been taken out of context,” said Luna. “I do know that from a policy perspective, that she is a very big supporter of Israel.”

Claims of antisemitism have gone both ways in the Florida campaign. Some of Luna’s campaign signs were vandalized, with Hitler mustaches drawn on a photo of her and Trump. She suggested, without evidence, that Lynn’s campaign was behind the graffiti. “​​I’ve already condemned antisemitism, but here are his supporters doing this,” said Luna. A spokesperson for Lynn condemned the vandalism in a statement to Tampa’s Spectrum News in October.

Lynn has criticized Luna for speaking at a July conference hosted by the conservative youth organization Turning Point USA in Tampa, where a group of neo-Nazi demonstrators waved Nazi flags outside the gathering.

“Turning Point does not support Nazis,” said Luna, who previously worked for the organization. But she questioned whether “it’s possible” that the people holding Nazi flags were opponents of Turning Point USA. “When I see that, and I see people that have their faces covered, and then they just up and disappear, and then all of a sudden, it’s like people are trying to blanket label it ‘conservatives.’ I just, I always question it.”

Luna’s top priority is achieving American energy independence, she explained, which she hopes to achieve by renewing construction on the Keystone XL pipeline and by pulling the U.S. out of the Paris Climate Accords. But her first move in Congress would be authoring legislation “that protects congressional candidates from all parties from being discriminated against on social media platforms,” she said. Luna has complained that it took a long time for her campaign account to be verified on Twitter, and she has railed against perceived discrimination against conservatives on popular social media accounts.

Lynn, for his part, is attempting to win over voters outside his political party. “The reason why Republicans and independents are voting for me in this race is because they know that I’m the common-sense candidate in the middle,” he said. He has highlighted economic issues, including his support for social security and Medicare, at times breaking with his own party.

“I did come out and state my opposition to hiring the 87,000 new IRS agents,” Lynn said, referring to Republican assertions that the $80 billion in additional funding Democrats authorized for the IRS will lead to the hiring for tens of thousands of auditors.

“A priority for me as well is protecting a woman’s freedom to make her own healthcare decisions with her doctor,” said Lynn, who pointed out that Luna does not believe in exceptions for rape, incest or to protect the life of the mother. “​​We need to do the humane thing and allow the mother to make that choice for herself with her doctor.”

Luna’s opposition to abortion has been a central point in her campaign and her political advocacy, beginning with her story that her father asked her mother to have an abortion — but she didn’t, and, instead, Luna was born. “A lot of people will say they’re pro-life, but then they’re for exceptions,” Luna said in a video recorded at the Conservative Political Action Coalition conference in March. But, she added, her husband was conceived when his mother was raped. “People don’t get to decide who gets to live and who gets to decide.”

She would not say whether she supports a bill, introduced in the Senate by Sen. Lindsey Graham (R-SC), that would ban abortion nationally after 15 weeks of pregnancy. “I’m not even going to entertain that idea. It’s up to the states to decide,” she said. “I don’t even think that I’m going to have to vote on that.”

Luna has stated that she believes the 2020 election was rigged, and that without fraud, Trump would have been reelected. Lynn, meanwhile, says that watching efforts “to upend the peaceful transfer of power” on Jan. 6 drove him to run for Congress. (He briefly ran for the seat in 2016 in a primary against Crist.) He recalls watching members of Congress being evacuated to the same place members were sent on Sept. 11, 2001, when Lynn worked for then-Rep. Peter Deutsch (D-FL). “This time, it wasn’t because foreign terrorists were attacking our nation. It was because U.S. citizens were violently attacking police and the United States Capitol and attempting to violently overthrow a free and fair election,” Lynn explained.

Since the August primary, Luna has attempted to tone down her rhetoric when speaking about 2020. She declined to say whether she would have joined Republican members of Congress who, on Jan. 6, 2021, voted not to certify the results of the 2020 election.

“I don’t like speculating on things that have been done in the past,” she said. When asked what she thought of the Republicans who did object to certifying the results, she offered praise: “I think that any Republican that stood on the grounds of wanting to ensure that this election was done correctly did the right thing,” Luna stated.

Similarly, when asked whether Biden is the lawfully elected president, she demurred. “Had it not been for COVID-19, President Trump would be sitting in the White House,” said Luna. She later changed her position: “I think Trump is the rightful winner of that election.”