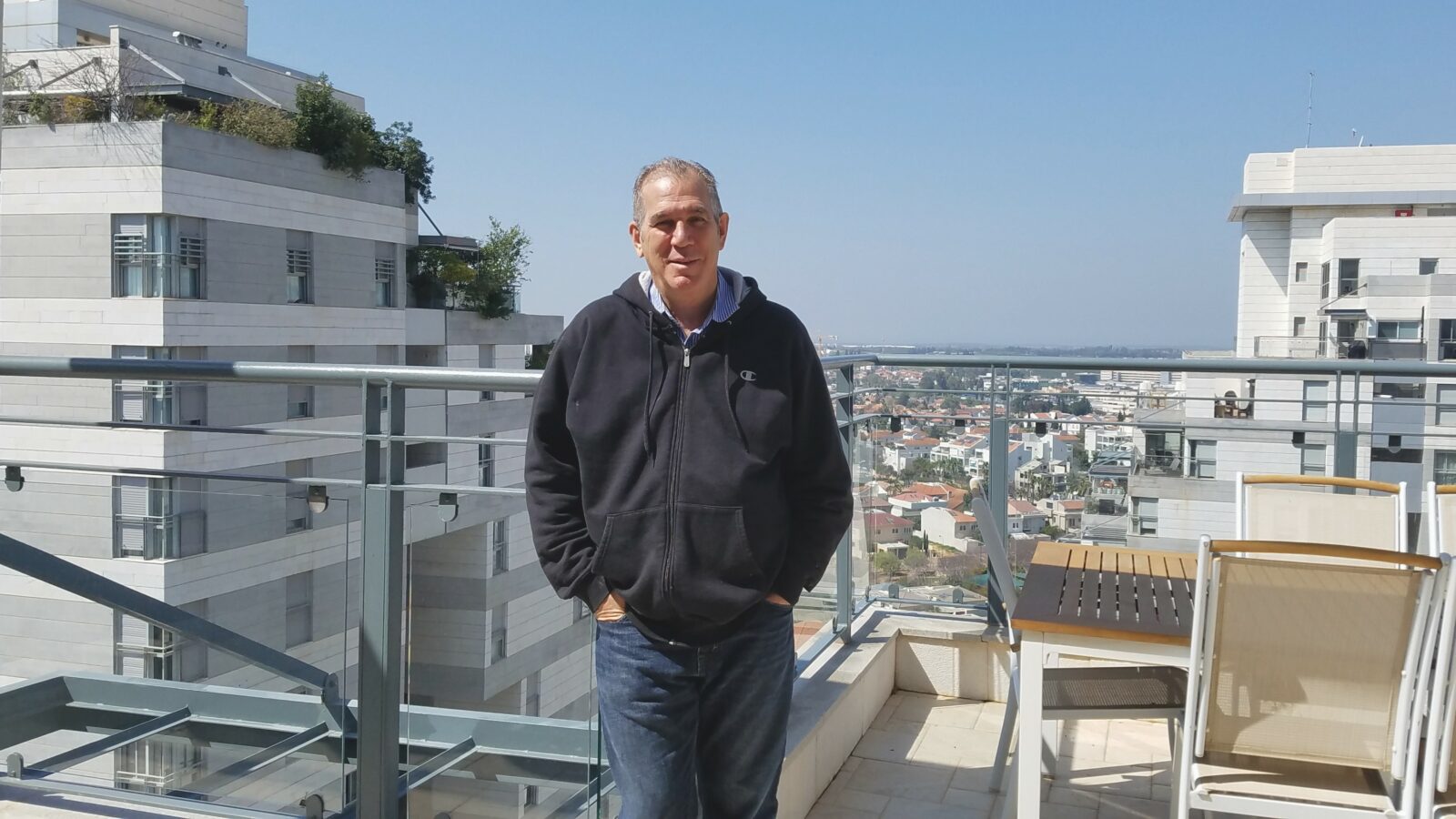 The distinguished gentleman from Ra’anana: The congressman who now calls Israel home

Former Florida Rep. Peter Deutsch has been out of Congress for 15 years — but he has plenty of views on his former colleague Bernie Sanders

For several years, then-Congressmen Bernie Sanders (I-VT) and Peter Deutsch (D-FL) had lockers side-by-side at the House of Representatives gym in the basement of the Rayburn House Office Building.

“I actually know him reasonably well,” Deutsch told Jewish Insider about the 2020 hopeful in a recent interview in his Ra’anana home. “I served with him for many years — his locker in the gym was actually next to mine and we both worked out a lot. And we’re both sort of New York Jews, so I was always very friendly with him.”

In fact, when Sanders ran for the Democratic presidential nomination in 2016, Deutsch said he and his entire family voted for the Vermont senator. That decision, he said, was in part because “no one thought he had any chance,” and also because he viewed former Secretary of State Hillary Clinton as deeply “inauthentic” and “incredibly transactional.”

The last time Deutsch saw Sanders — approximately two years ago — the two men embraced, although Deutsch was quick to add “he’s not a huggy kind of guy.” Deutsch recalls telling Sanders, “‘listen, my whole family voted for you in the primary,’ and Sanders, in all seriousness, said to me: ‘Well, next time you better have a bigger family.’”

Fast forward just a few years, and Deutsch doesn’t take the chance of Sanders winning the presidential nomination as lightly. “Sanders would just be absolutely horrific for the world,” he said. “As a person, he’s a lovely person,” Deutsch said, though he’s “just as ornery as he always seems.”

But the senator, he warned, “is not a socialist. He’s a Trotskyite… I think his agenda is actually to have a confederation of the United States, China and Russia, so there won’t be any wars.” If Sanders were elected president, Deutsch predicted, he would stop not just aid to Israel, but even “spare parts,” and demand Israel open its borders with Gaza and the West Bank.

Deutsch, who left Congress 15 years ago after losing his bid to win the Democratic nomination for Senate in Florida, says he is only nominally active in politics these days. But several months ago, he reached out to the Michael Bloomberg campaign to offer his support, telling JI, “I could not live with myself if I didn’t do something to try to prevent Bernie Sanders from being the nominee.”

Today, Deutsch, 62, lives a very different existence from the 12 years he spent serving in the House of Representatives. The former congressman spends about half his time living in Israel with his wife and children, while frequently travelling back and forth to Florida.

Clad in a black suede yarmulke, jeans and a hooded sweatshirt, Deutsch is casual and relaxed in his modern, air-filled apartment on the 13th floor of a Ra’anana skyrise. His wife, Lori, and their son, Jonathan, pop in and out of the kitchen, chiming in with memories of his time in politics and their more recent adventures in Israel. His demeanor on a recent Sunday morning seems worlds away from the reputation he gained in office as aggressive, ambitious and brash. After all, he’s close to 6,000 miles away from his former life in Washington.

For the past 14 years, Deutsch has essentially split his time between south Florida and Ra’anana, while his immediate family is largely based in Israel. Neither he or his wife have become Israeli citizens, but his children both made aliya, and his first grandchild is a proud sabra.

“I don’t have a set schedule,” he says of his constant travels. “I try not to be away [from Israel] more than two Shabboses.”

A native of the Bronx, Deutsch was elected at age 36 to Congress, representing Florida’s 20th congressional district, in 1992, after a 10-year stint in the Florida House of Representatives. While in office, he distinguished himself during the investigation of the Enron scandal, through efforts to improve human rights in Cuba and a strong push for a recount in Florida following the 2000 presidential election. In 2004, Deutsch ran for the open U.S. Senate seat in Florida. After a bitter campaign, he lost the Democratic primary race to Betty Castor, who went on to lose the general election to Republican Mel Martinez.

Deutsch was replaced in Congress by Rep. Debbie Wasserman Schultz (D-FL), who began her political career as an aide to Deutsch when he was a state legislator. At Deutsch’s urging, she ran for his vacated seat in the Florida House of Representatives in 1992 and won, then later followed in his footsteps again into Congress.

“We’re in touch occasionally,” Deutsch said of Wasserman Schultz. “She’s actually served in Congress longer than me at this point. She is having a very distinguished career.”

But Deutsch is largely uninvolved in politics today. He spends the bulk of his professional work, while in both Florida and Israel, working on the network of Hebrew charter schools, Ben Gamla, that he founded in 2007. The school system — which now includes five elementary schools and one high school — is public, strictly non-religious and government-funded, but teaches Hebrew, Jewish history and culture to approximately 2,000 students of all backgrounds and religions in south Florida.

“What we’re doing is incredible, and the impact on kids is amazing,” Deutsch said of the schools, where he serves as a pro bono attorney. During the recent holiday of Purim, Deutsch noted, there was “some sort of celebration — not in a religious way, but in a cultural-historical way” in the Ben Gamla schools. “And it’s possible those will be the only public schools in America where there’s any acknowledgment of that.”

After 13 years in operation, Deutsch said the schools are still “very much in the startup phase,” but they’re discussing and planning how to scale up, and whether there is a market nationwide for additional Hebrew charter high schools.

With his focus almost entirely on the Ben Gamla schools, Deutsch said that, “in the last 14 years, I really only got involved in one issue politically” — his lobbying efforts in 2015 against the Iran nuclear deal, as a member of Citizens for a Nuclear Free Iran.

And, just a couple of weeks ago, Deutsch did something he said he hadn’t done in 14 years. “I did a fundraiser for a political person,” freshman Rep. Max Rose (D-NY) in Florida: “I think he’s the real deal, I think he’s a good guy.”

Deutsch said he reached out to Rose’s office last year, after he was troubled when Congress watered down a bill intended to condemn antisemitism, ultimately condemning “hateful expressions of intolerance.”

During that period, just a few months into Rose’s first term, Deutsch found the young congressman’s comments to be “probably the most insightful statements of any member of that time.” During a trip to Washington soon after, he reached out to Rose’s office and asked to sit down with the congressman — and ended up “having dinner for a couple hours.” Both men, Deutsch said, were at one point the youngest Jewish members of Congress, and both captains of their high school wrestling teams at rival New York City prep schools.

As for the other Deut(s)ch in Congress from Florida, Rep. Ted Deutch (D-FL), they’re not related, but Deutsch jokes that “he owes all his success to me.” However, their similar names and home states have led to a fair share of confusion. House Majority Leader Steny Hoyer, Deutsch said, still purportedly calls Ted Deutch, “Peter.” And approximately a year and a half ago, Peter Deutsch’s phone rang — it was former Vice President Joe Biden, thinking he had reached Ted Deutch. When Peter realized the error, he passed along Ted’s cellphone number to Biden.

During his dozen years in Congress, Deutsch was an outspoken supporter of the close relationship between Jerusalem and Washington. And while he’s critical of and concerned by President Donald Trump’s “erratic nature,” he notes that the president “has done some amazing things for Israel.” It was therefore disappointing, he said, to see the reaction from fellow Democrats following the administration’s decision to move the U.S. embassy to Jerusalem. Deutsch said he was invited to the embassy opening by Ambassador David Friedman, and wanted to attend, but had to be out of the country at the time. “Had I gone, I would have been the only [former or current] Democratic elected official there,” he noted.

Deutsch says the recent Trump peace plan is more realistic than most people want to admit. “At the end of the day, if there were a settlement, it would sort of look like this,” he said. “There might be a few changes… but, here’s reality. If you don’t want reality, that’s fine. But this is reality.”

Israel has demonstrated for many years, he says, that it can operate without a final-status agreement in place. “Israel can live with the ambiguity of not having final-status,” Deutsch said. “Israel has thrived in the last 14 years.” But, he warned, it’s still politically risky — “if someone like Bernie Sanders gets elected president” — and the BDS movement gains influence within the United States.

“It’s not outside the realm of possibility that the United States, at some point in time, could join the boycott of Israel. It could happen in a nanosecond, who else would stop it? And then where would Israel be — economically and socially?”

Constantly on the go between Israel and the United States, Deutsch considers himself uniquely positioned to fight for the future of Jewish continuity.

“Most Jews in America, at this point in time, choose to be on the outside” of the Jewish community, he noted. “And that’s why the community is in the state that it’s in. But I don’t feel like I’m on the outside. I feel like I’m in the movie… and everyone has that choice,” he said. “I’m pretty blessed.”