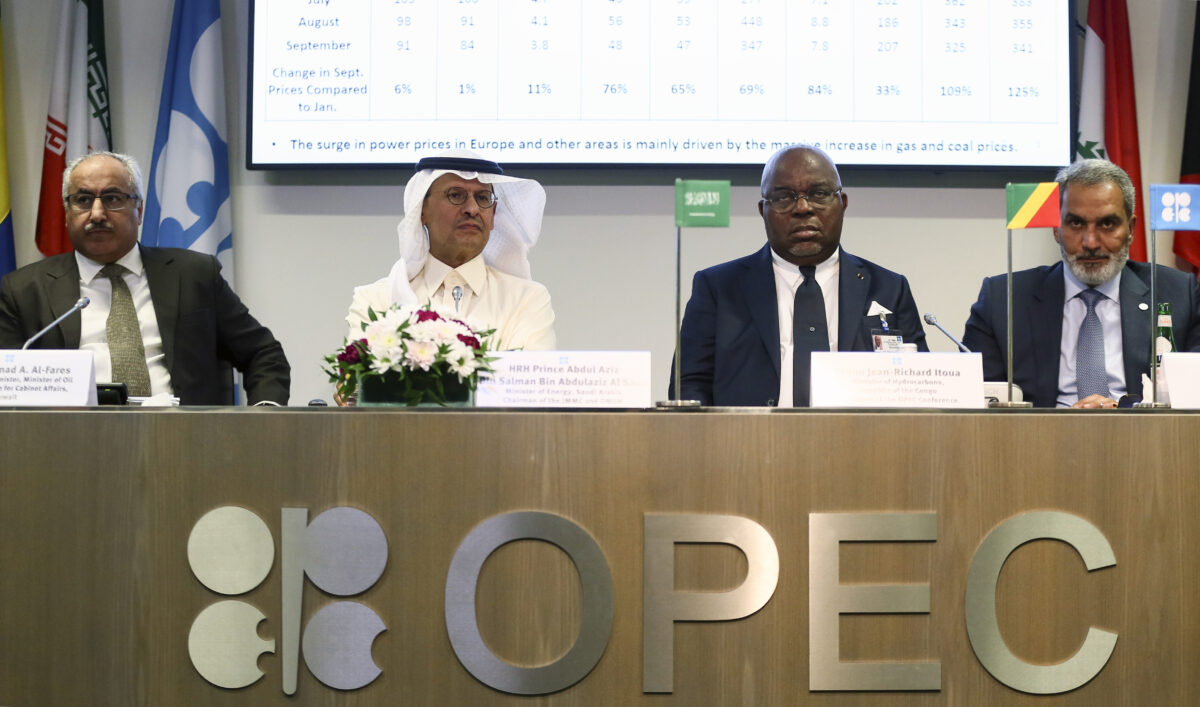 Some Democratic lawmakers are raising concerns over the Organization of the Petroleum Exporting Countries’ (OPEC) decision to slash oil production — in spite of U.S. pressure to increase output — likely driving up oil prices.

Congressional Democrats reacted to the decision by the Saudi- and Russian-led group of oil-producing countries, announced Wednesday, which the legislators warned would bolster Moscow in its invasion of Ukraine. Three lawmakers — Reps. Tom Malinowski (D-NJ), Sean Casten (D-IL) and Susan Wild (D-PA) — introduced legislation seeking to remove all U.S. personnel and missile-defense systems from Saudi Arabia and the UAE.

Those missile-defense systems have served as an important line of defense against Iranian and Iranian-backed attacks on the Gulf states. U.S. officials and lawmakers have also recently sought to promote an integrated regional air-defense initiative, and increased regional military cooperation, among Saudi Arabia, the UAE, Israel and other Middle Eastern states.

“Both countries have long relied on an American military presence in the Gulf to protect their security and oil fields. We see no reason why American troops and contractors should continue to provide this service to countries that are actively working against us. If Saudi Arabia and the UAE want to help Putin, they should look to him for their defense,” the three Democrats said in a joint statement. “They have made a choice and should live with the consequences. Our troops and military equipment are needed elsewhere.”

In a statement on Wednesday, National Security Advisor Jake Sullivan and National Economic Council Director Brian Deese said the administration would “consult with Congress on additional tools and authorities to reduce OPEC’s control over energy prices.”

The lawmakers called the OPEC decision a “slap in the face,” despite overtures by the Biden administration to the Saudi government, including President Joe Biden’s trip to Saudi Arabia earlier this year.

Malinowski, the vice chair of the House Foreign Affairs Committee, is a longtime friend of Secretary of State Tony Blinken, but has urged the administration to take more aggressive stances on human rights issues around the world, including in Saudi Arabia and Russia.

Sen. Chris Murphy (D-CT) called for a “wholesale reevaluation” of the U.S.-Saudi alliance, and questioned the benefits of the U.S.’s arms sales to Gulf states, and said Biden’s trip to Saudi Arabia did not appear to have achieved its goal of reining in oil prices.

Rep. Ruben Gallego (D-AZ), who chairs a House Armed Services subcommittee, also said the U.S. should “take back” its Patriot missile-defense batteries in Saudi Arabia. And Rep. Ro Khanna (D-CA), a prominent progressive, said the U.S. should stop supplying Saudi Arabia with weapons and aviation parts and that the kingdom should be “dealt with harshly.”

Mohammed Alyahya, a senior fellow at the Hudson Institute and a fellow at the Belfer Center’s Middle East Initiative at Harvard Kennedy School, suggested that the pushback against Riyadh “so casually strips [Saudi Arabia] of its right to consider its own diverse interests.”

The OPEC move comes at an inopportune time for Democrats, who had been hoping to maintain a recent trend of decreasing gas prices ahead of the November midterm elections. A new increase in gas prices could drive voters away from Democrats in crucial races next month.