Lapid is in New York for his first trip to the U.S. as prime minister 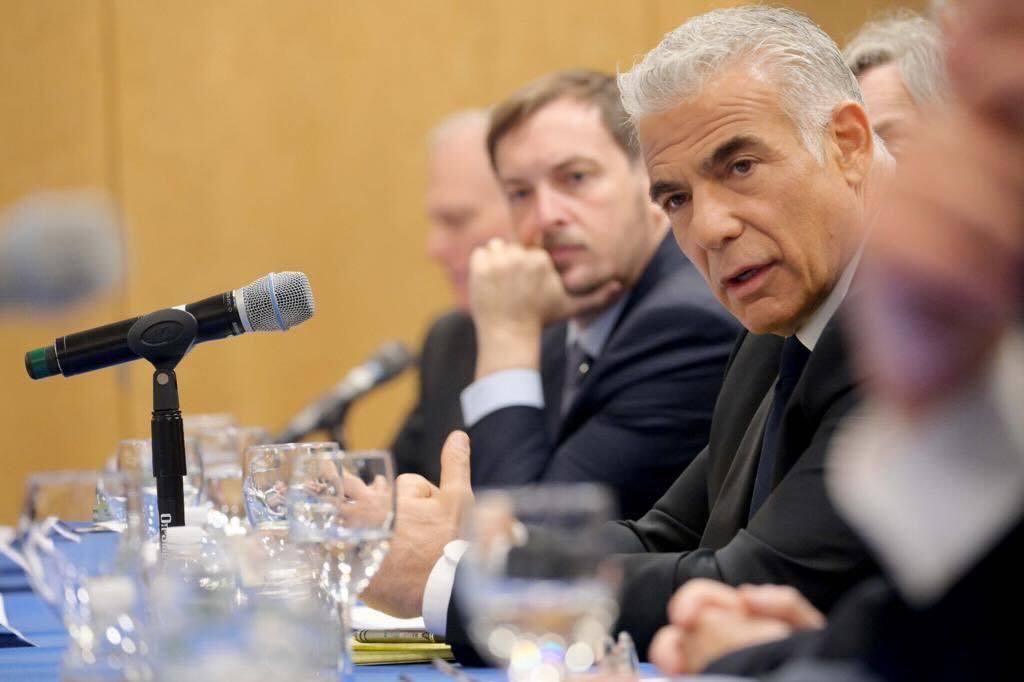 Israeli Prime Minister Yair Lapid emphasized the importance of “celebrating difference” and ensuring that Israel is a welcoming space for Americans of different denominations in a meeting with American Jewish leaders in New York City on Wednesday.

The wide-ranging discussion touched on such issues as Israeli-Diaspora relations, the Iran nuclear deal, immigration, rising antisemitism, the war in Ukraine and maintaining bipartisan support for Israel in Congress.

Lapid, who arrived in New York on Tuesday for the annual gathering of the United Nations General Assembly, spoke for an hour with 50 Jewish leaders from across the political and denominational spectrums. The closed-door event, held at the offices of UJA-Federation of New York in midtown Manhattan, was co-hosted by the Jewish Federations of North America and the Conference of Presidents of Major American Jewish Organizations.

According to two attendees who were present during the meeting, Lapid, who assumed the prime ministership in July, set a warm and engaging tone while delivering his opening remarks, in which he emphasized the “importance” of the Jewish diaspora, recognized a number of familiar faces and said that he “felt at home” in New York.

“We are one family. You are my brothers and sisters. The government of Israel accepts all streams of Judaism,” Lapid told participants. “The special bond between Israel and Jews around the world is one of our top priorities, and we will show this. Israel must be, and will be, an open home for all Jews.”

Among the first issues Lapid raised, one attendee who spoke with Jewish Insider said on Wednesday, was his recent conversation with a non-Orthodox American teenager whose bar mitzvah was disrupted by Haredi protestors at the Western Wall this summer.

“He mentioned specifically that that was a growing challenge,” the participant, who requested anonymity to discuss the off-the-record meeting, recalled. “He talked about safety and pluralism and how Israel should be a place where Americans can come and how the Western Wall is a place where different denominations should feel free to practice their religion.”

“It felt like a nice conversation among friends,” the participant said.

Another attendee, who also asked to remain anonymous, said Lapid’s approach at the roundtable event was “refreshing,” at least in contrast with his predecessor and chief political rival, former Israeli Prime Minister Benjamin Netanyahu. “With Netanyahu, he would come in and basically give a U.N. speech, complete with powerpoint,” the attendee said. “It was more a show than a dialogue and a give-and-take.”

Lapid, for his part, gave a seven-minute introductory speech and then took 10 questions from the group, according to the attendee.

In a joint statement, Daroff and Fingerhut said they were “grateful” that Lapid had “prioritized meeting with leaders of the North American Jewish Community ahead of his address” to the General Assembly on Thursday. “We are heartened by his shared commitment to strengthen Israel-Diaspora relations,” they said, “and look forward to continuing our close collaboration with the Israeli government on issues of common importance with the North American Jewish community.”

Lapid is expected to call for a two-state solution to the Israeli-Palestinian conflict in his U.N speech today, according to reporting from Axios as well as The Times of Israel, drawing criticism from right-wing members of his coalition and support from some on the left.

The Israeli prime minister made no explicit allusion to a two-state solution and did not discuss the content of his General Assembly speech during the meeting with Jewish leaders on Wednesday, the two attendees said.