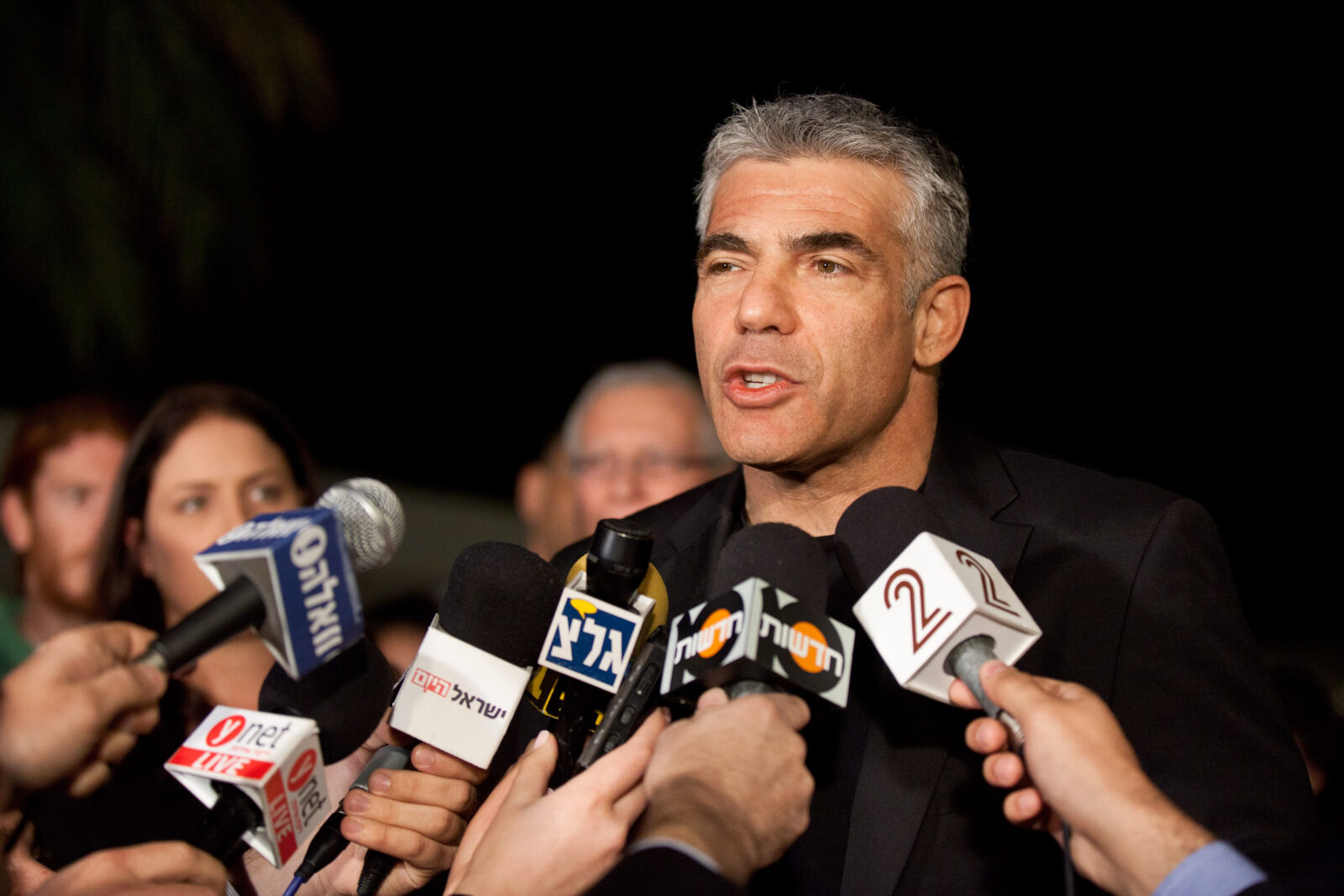 After a week of tumultuous politics, Israel will soon have a new prime minister: Yair Lapid.

A man who has long eyed the country’s top job, Lapid will replace Naftali Bennett as the 14th prime minister of Israel when the Knesset is dissolved in the coming days. Although he will serve only as a caretaker until a general election that is likely to take place in the fall, Lapid will be in a prime position to showcase his talents and make the argument to Israelis that he is a leader worthy of their support.

Lapid’s rise from a journalist and media personality — whose credits include a “Top Gun”-style commercial for an Israeli beer company — to Israel’s most powerful political figure is unusual and, for many, unexpected. Unlike most of the country’s previous leaders, he has no significant security or military background, holds no academic degrees and, although over the past decade has held positions such as foreign minister, finance minister and opposition leader, he does not have professional roots in politics.

“It is unusual that an Israeli person with no security background can become prime minister,” Aviv Bushinsky, former media advisor and chief of staff for former Prime Minister Benjamin Netanyahu, told Jewish Insider.

While Ehud Olmert, who served as prime minister from 2006 to 2009, had a limited military background, Bushinsky continued, he was a longtime political player — a so-called “Likud prince” because he rose up through the ranks of the right-wing party — who took over the premiership after then-Prime Minister Ariel Sharon suffered a stroke and was unable to carry out official duties.

Bushinsky also pointed out that Lapid, unlike his predecessors, did not complete higher education and holds no university degree.

“This is the first time in Israel that something like this has happened,” Bushinsky observed. “In Israeli society, you are respected if you are [an army] general, but if you don’t have that and you don’t have an academic background, it’s awkward.”

“Israel is not like the U.S., it is not a country of endless possibilities,” he explained. “If you are not an army veteran or war hero, if you are not educated, then it’s hard to become anything, and here we have someone who is known for living in the nightlife of Tel Aviv, known for his songs, for beer. This is not something that usually happens in Israel.”

Professor Gideon Rahat, a senior fellow at the Israel Democracy Institute and a member of the Hebrew University of Jerusalem faculty, said he did not believe that Lapid’s unusual-for-Israel background would work against him.

“I think that the status of the military in Israeli politics has declined,” Rahat told JI, adding that some people admire Lapid’s more glamorous professional background.

Best known as a longtime anchor on Israeli television’s highest-rated news show, Lapid was already a household name before entering politics a decade ago. The son of contentious journalist-turned-politician Yosef “Tommy” Lapid, founder and leader of the liberal secular Shinui (Change) party who served as justice minister and deputy prime minister from 2003 to 2004, and Shulamit Lapid, a novelist and journalist, Israel’s next prime minister was born in Tel Aviv in 1963.

He spent his military service as a correspondent for the army’s then-print magazine, Bamachane, before working as a journalist and eventually becoming a regular face on Israeli TV screens, hosting and starring in multiple shows, including the nightly news. In addition, his official bio notes, the soon-to-be-prime minister authored a popular weekly newspaper column, has written a dozen best-selling books and even penned several hit pop songs.

In 2012, he left the entertainment and news industry for politics, setting up the centrist Yesh Atid (There is a Future) party with the aim of promoting a liberal Zionist agenda that would better integrate Jewish and democratic values. Propelled by his fame, Lapid won some 19 Knesset seats in his first election in 2013, turning Yesh Atid into the second-largest party after Netanyahu’s right-wing Likud faction.

Critics at the time dismissed him and his party as a political one-hit-wonder, predicting he would quickly fade from Israeli politics like others before him. Initially, his popularity waned after he joined Netanyahu’s coalition and served in the often-challenging role of finance minister. In December 2014, Netanyahu fired him, breaking up a fraught coalition and taking the country to an early election in March 2015. Battered by his time in the government, Lapid lost nearly half of his electoral support, with Yesh Atid gaining only 11 Knesset seats in that vote.

He managed to remain on the scene, however, with his political tenacity coming to the fore throughout the four recent election cycles that have taken place over the past three and a half years. Through two of those votes, in 2019, Lapid allied with two former generals – current Defense Minister Benny Gantz and Gabi Ashkenazi – in an attempt to defeat Netanyahu. The alliance disbanded in 2020 after Gantz agreed to join one of Netanyahu’s coalitions as alternate prime minister.

After the last election in March 2021, Lapid, alongside Bennett, again surprised analysts by strategically pulling together a broad coalition of eight ideologically conflicting parties from across the political spectrum, including for the first time an Arab-Israeli Islamist faction.

“When Lapid consulted me before he entered politics, I told him that he must join an existing party,” said Rahat. “He did not want to do it and what he is doing now is against all odds.”

Rahat pointed out that in the past parties led by a “personality” have only been successful once or twice. After that, he said, “they disappear.”

“He has managed to strengthen his support and his position as leader of the anti-Netanyahu camp, and he did so within 10 years, which is quite meteoric,” he said of Lapid. “He has succeeded against all odds and he might continue to surprise us.”

Serving as foreign minister and alternate prime minister over the past 12 months, Lapid has boosted his status both in and out of Israel. He has met with numerous world leaders, including Vice President Kamala Harris and other top Democrats. Most significantly, he headed the recent Negev Summit, which included representatives from Morocco, the United Arab Emirates, Bahrain, Egypt and Secretary of State Tony Blinken.

Now as prime minister, albeit in an interim capacity, Lapid has the chance to showcase his political prowess from the prime minister’s chair.

Last week, Lapid flew to Ankara, Turkey, to meet with his Turkish counterpart, Mevlüt Çavuşoğlu, to discuss recent credible Iranian terror threats against Israeli targets in the country. Next month, when President Joe Biden visits Israel, Lapid will be the one to greet him on the tarmac.

Such high-level meetings not only give the caretaker prime minister valuable photo ops, they also strengthen his ability to fend off his top opponent – Netanyahu, who has described himself as being, from a diplomatic perspective, in a “different league.”

“Being prime minister has a symbolic meaning,” said Rahat. “However, the most important thing is setting the agenda, and as long as Lapid can control the agenda or a large part of it, then he has an important asset.”

Rahat pointed out, however, that external factors, such as the ongoing COVID-19 pandemic and terrorism, could shape Lapid’s agenda. In addition, he said, Israeli society remains starkly divided, with few floating voters and Netanyahu’s supporters standing firmly behind him, leaving little that could significantly impact the outcome of the next election.

Polls conducted following Bennett’s announcement that the coalition would disperse still show that no single party or candidate will find it easy to form a government.

Bushinsky said that Lapid might be able to use his new position as prime minister to show that “a guy with no army experience, a former television star who managed to penetrate into politics, can do things on a security level.”

“He will want to be seen on army bases and show that he understands and knows how to deal with these important security issues,” Bushinsky said.