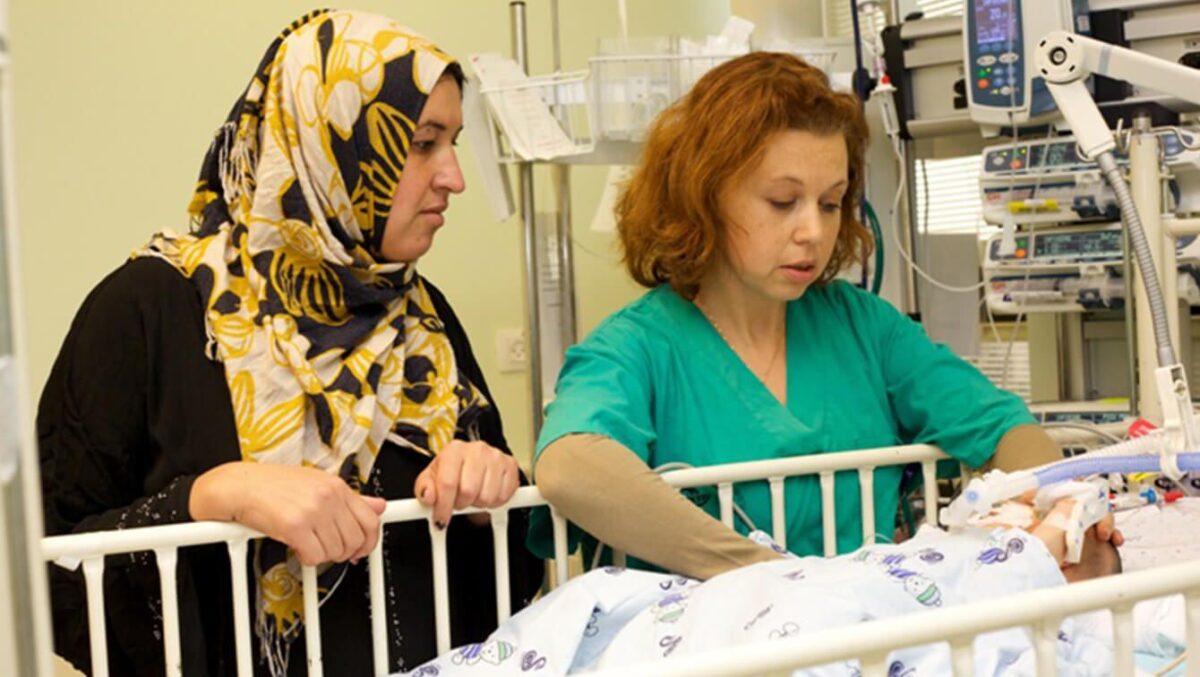 An Israeli and a Palestinian nurse work together in an Israeli hospital.

Walk into any Israeli hospital and one might be forgiven for thinking peace between Israelis and Palestinians has already broken out. Arabic and Hebrew are heard in equal measure from both practitioners and patients, and any nationalistic or religious differences are set aside.

While the healthcare system is a unique bubble of coexistence amid an intractable conflict, it is also a powerful reminder that peace between the two peoples might one day be possible – a small ray of hope that the Biden administration is choosing to build upon.

During his visit to the region last month, President Joe Biden announced that a $2.21 million United States Agency for International Development (USAID) grant was being awarded to the Jaffa-based Peres Center for Peace to create a three-year program to build a cross-border medical community. The grant is part of the Nita Lowey Middle East Partnership for Peace Act (MEPPA) Partnership for Peace Fund, which was enacted in late 2020.

The Peres Center, which was founded by Shimon Peres, the late Israeli president and Nobel Peace Prize winner, is using the grant to lay the foundation for an assortment of initiatives ranging from peer-to-peer training, shared workshops and specialized conferences organizers hope to launch later this year.

“Medicine is a really good field to focus on because when a program is developed well, you can really see the sustainable impact,” Yarden Leal-Yablonka, the center’s deputy director general, told Jewish Insider in a recent interview.

“It sounds cliched, but hospitals and doctors have an oath of doing no harm and helping anyone who needs help,” she continued. “A program that comes from a value-based outlook, bringing together people and showing there is a point to cooperation, creates fruits that can be enjoyed by everyone.”

Currently, Israeli hospitals receive patients on referral from the Palestinian healthcare system, but the process is decentralized and is often a burden on Israeli hospitals, which are already stretched to full capacity. On the Palestinian side, such referrals are a financial strain on both patients and on a semi-privatized health system that faces a shortage of specialists and family doctors, especially those working with children.

The new initiatives, Leal-Yablonka explained to JI, will offer practical solutions to both healthcare systems. The flagship program being developed aims to offer training for medical personnel from both the West Bank and Gaza in Israeli hospitals. They will be given the opportunity to train with some of the top doctors in the world, use state-of-the-art technology and eventually return “to form the backbone of the Palestinian public healthcare system,” she said. The program, together with shared workshops, conferences and face-to-face collaboration, will also create crucial professional connections enabling future consultations in various medical fields.

The Peres Center, which opened in 1996 and also showcases Israeli technology with a permanent interactive innovation exhibit, has already facilitated training for some 300 Palestinian doctors in Israeli hospitals. They, in turn, have treated or interacted with more than 1.5 million Israeli patients. According to data shared with JI, 90% of the program’s graduates now work in the Palestinian public healthcare system, and 20 have gone on to become heads of hospitals or heads of departments.

On a practical level, Leal-Yablonka added, bringing together Israeli and Palestinian doctors and other medical professionals, who are agents of change just by the nature of the work they do, will have a broad ripple effect on ordinary people in the region and on other types of partnerships.

She continued: “As a non-political organization, we fully understand that while peace will be achieved at the end of the day by politicians at the political level, peacebuilding can and should happen outside the political sphere, through civil society work, and through grassroots work.”

“We’re very pleased that USAID and MEPPA are prioritizing the health sector in this way,” said Lyndon. “Israelis and Palestinians are far too separated, with walls, permits, and checkpoints serving as physical barriers that limit their opportunity for interaction. There are also psychological barriers of fear and mistrust, anti-normalization and sometimes outright disinterest in the other population that is only a few kilometers away.”

“We’ve found that work focused on health can be especially effective,” he continued. “In focus groups and polls we ran last year, even the minority of Palestinians in the West Bank who thought that civil society engagement with Israeli counterparts was unacceptable made an exception for those in need of healthcare.”

“Even some of the harder-line views in Israel allow for the need to provide medical assistance to Palestinians,” Lyndon continued. “So, there’s an opening there – the humanization, mutual empathy and interdependence that can be generated from such exchanges and encounters are tools that are badly in need of for Israeli/Palestinian conflict resolution.”

In lieu of any real peace process between Israelis and Palestinians on a political level, Lyndon said it was critical for the international community “to use this period to build, from the bottom-up, the sort of conditions that can make diplomacy more viable.”

“In a way, it’s the inverse of what we’ve seen over the last three decades, where we’ve had elite-level diplomacy delivering diminishing returns over time, but very little attention paid to creating the conditions and the parallel constituencies incentivizing politicians to take the risks necessary for peace,” he concluded. “We hope that MEPPA, and potentially an even more ambitious and well-resourced international fund can use civic and economic tools to build toward an elite-level agreement.”