'It’s important that Israel remains a strong ally and a strong partner in the Middle East,' Barnes said at a forum on Thursday 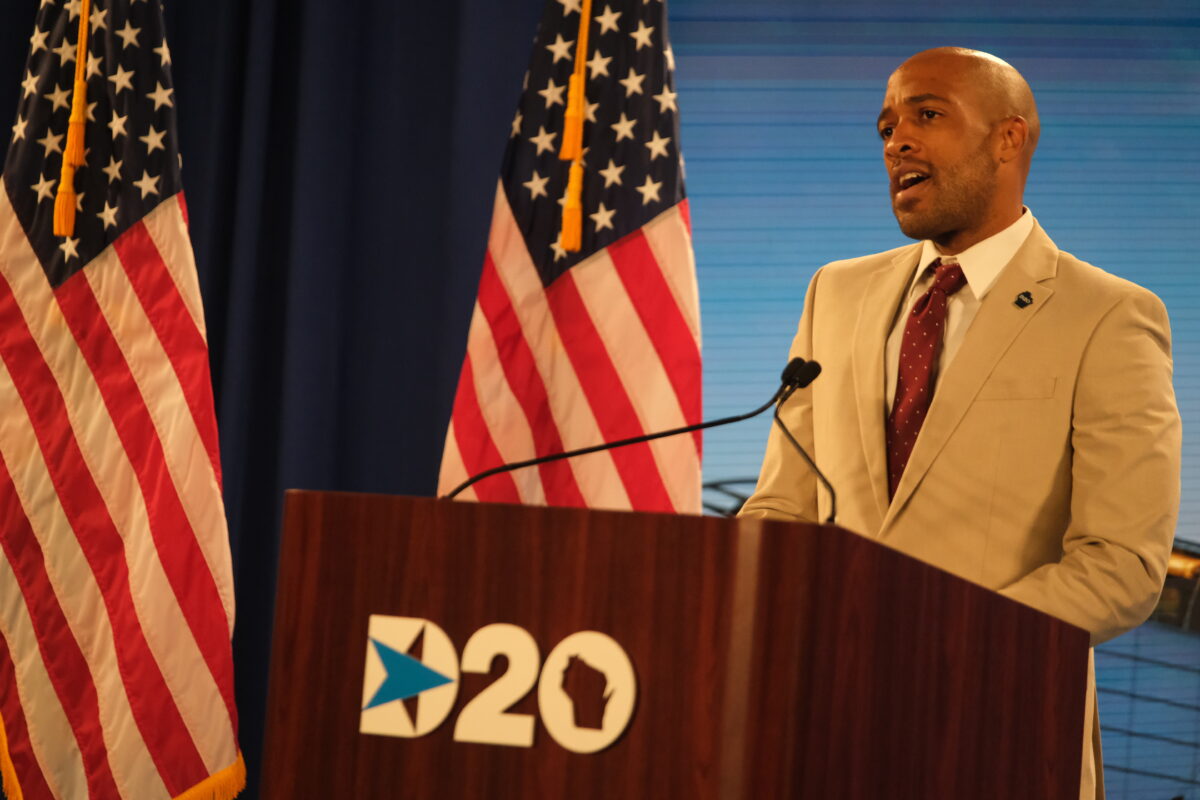 Wisconsin Lt. Gov. Mandela Barnes offers his state's votes to nominate former Vice President Joe Biden as the Democratic nominee for president at the 2020 Democratic National Convention at the Wisconsin Center on August 18, 2020, in Milwaukee, Wisconsin.

Mandela Barnes, a frontrunner in Wisconsin’s crowded Democratic Senate primary, affirmed his support for continued U.S. aid to Israel on Thursday while participating in a virtual candidate forum hosted by the Jewish Democratic Council of America, effectively distancing himself from previous comments in which he had been somewhat less forthcoming in explaining his position.

“I had an incredible opportunity to visit Israel 10 years ago, got to bear witness to the harsh reality of Israel’s national security, and I do support the MOU,” Barnes said at the forum, referring to the memorandum of understanding between the U.S. and Israel that guarantees such funding. “It’s important,” he emphasized, “that Israel remains a strong ally and a strong partner in the Middle East.”

Barnes, the lieutenant governor of Wisconsin, offered a different response in an interview with Jewish Insider last fall. While he said he would “always support funding” for “legitimate security purposes,” the Senate hopeful shied away from explaining whether his views would lead him to endorse placing conditions on the aid. “I want to ensure that no American taxpayer dollars go toward activity that violates human rights,” Barnes explained at the time, “including the demolition of homes, forced evacuations or promoting new settlements.”

During the forum, however, Barnes, who has occupied something of a mainstream progressive lane, made no allusion to his past remarks, nor did he mention conditions or other restrictions on aid to Israel that some left-leaning lawmakers in the House and Senate have supported.

Barnes also said he “would have voted” in favor of legislation providing supplemental funding for Israel’s Iron Dome missile-defense system that passed the House last September in a contentious floor vote, even as he has otherwise admitted to reservations over the “hasty” manner in which the aid was introduced. “Israel needs to be able to defend itself,” Barnes said on Thursday, adding that he does not support efforts “that would deny that,” such as the Boycott, Divestment and Sanctions movement targeting the Jewish state.

“Our nation’s strong relationship with Israel is based on both our shared ideals and our shared national security interests as well as democracy,” Barnes said at the forum, which was moderated by Halie Soifer, the JDCA’s chief executive officer. “I don’t take any of that for granted, and that’s why I’m a strong advocate for security and maintaining that.”

Barnes was joined by three other candidates who are seeking the Democratic nomination in the Aug. 9 primary to challenge Sen. Ron Johnson (R-WI), including Alex Lasry, on leave from his role as senior vice president of the Milwaukee Bucks; Sarah Godlewski, the state treasurer of Wisconsin; and Tom Nelson, an Outagamie County executive and former state legislator.

Independent polling on the race has indicated that Barnes is the favored candidate, even as his lead has narrowed since he announced his candidacy last summer. In a Marquette Law School Poll survey released on Wednesday and conducted in mid-June, Barnes was in first place at 25% among 369 Democratic primary voters, four points ahead of Lasry but still within the margin of error. Godlewski and Nelson, in third and fourth place respectively, both garnered support in the high single digits.

By varying degrees, the four candidates who spoke at the forum — which ran more than an hour and touched on a range of domestic and foreign policy questions — all expressed support for continuing aid to Israel as well as Iron Dome funding.

While Godlewski stressed that backing such assistance is “absolutely critical,” Lasry said he was “disappointed” to have seen Democrats as well as Republicans “criticizing and holding up the ability for Israel” to receive Iron Dome funding “to protect itself.”

Nelson, a self-described “economic populist” who has modeled his campaign in the style of Sen. Bernie Sanders (I-VT), said he supports both “military and foreign aid” to Israel, but was relatively ambiguous on the subject of conditions.

“As far as conditions go, I believe that above all, when it comes to U.S. foreign policy, we have to be consistent,” he explained. “So if we do not have conditions for other countries like Saudi Arabia, why should we single out Israel? I think that’s something that we really need to take stock in.”

In an interview with JI last December, Nelson confirmed his support for so-called “end-use restrictions” favored by the liberal advocacy group J Street, which argues that U.S. aid to Israel should only be used for “legitimate security purposes.”

J Street is backing all four candidates in the primary, though Nelson appears to be the only one among them who has publicly endorsed the restrictions.

The Democratic field also includes some lesser-known candidates like Steven Olikara, the founder of a nonpartisan youth advocacy group, the Millennial Action Project, who has earned support from prominent Jewish leaders in Milwaukee. He did not participate in the forum.

The JDCA has said it is not planning to make an endorsement in the race.