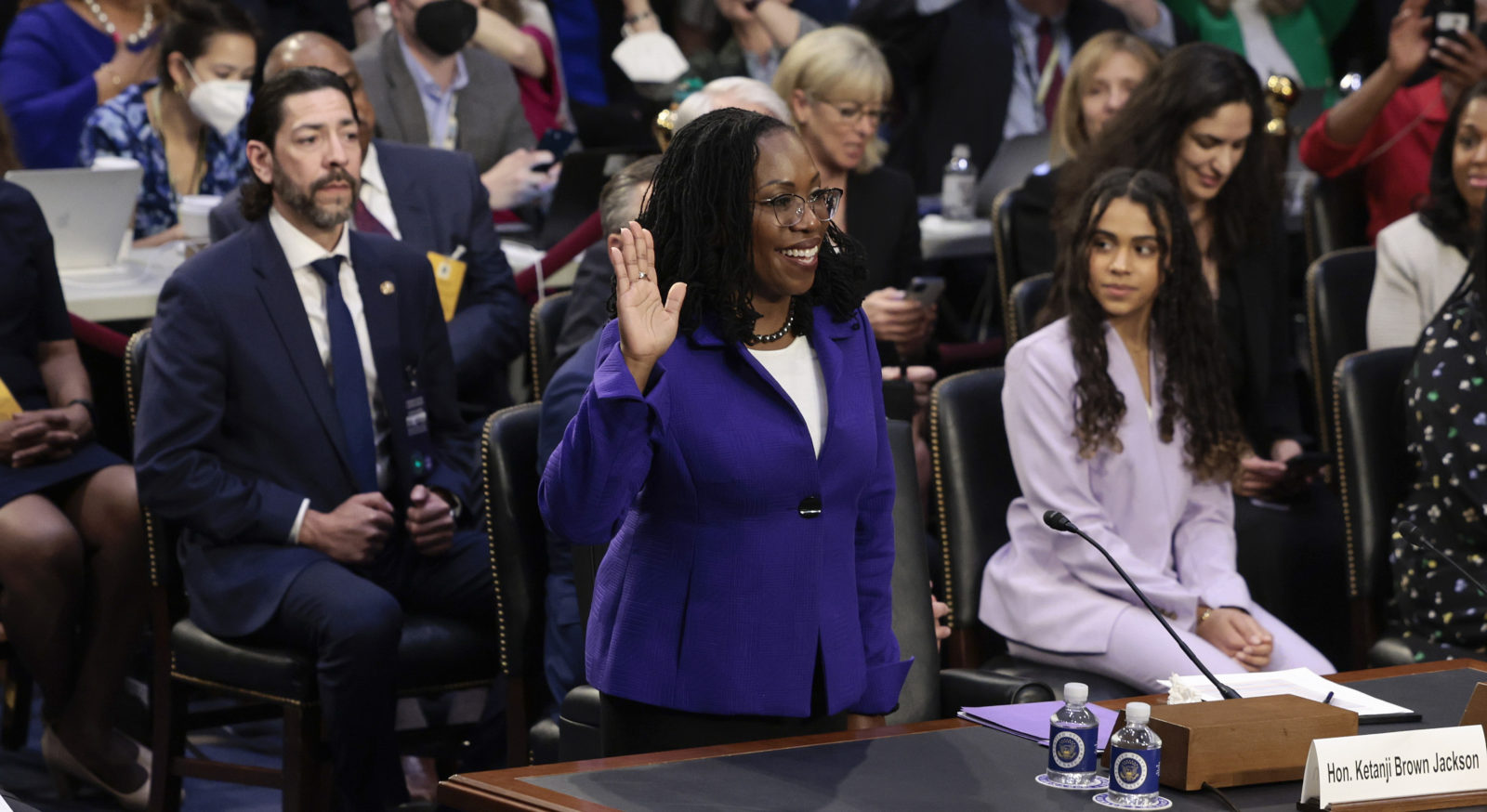 The three jurists most recently nominated to the Supreme Court had very little in common before they were tapped to sit on the highest court in the land. Brett Kavanaugh grew up near Washington, D.C., and attended Yale Law School; Amy Coney Barrett was raised in suburban New Orleans and went to Notre Dame Law School; and Ketanji Brown Jackson, a Harvard Law grad whose confirmation hearings take place this week, hails from Miami.

But they shared one formative experience: As young lawyers, each worked at a now-defunct boutique law firm in Washington called Miller, Cassidy, Larroca & Lewin.

“It was a very unusual firm,” said Nathan Lewin, one of the firm’s founding partners and a crusading attorney known for his decades of work on civil liberties cases. “It was both color-blind and gender-blind. We hired people regardless of race, regardless of gender. It was just the best people, a meritocracy.”

Today, Washington’s most prestigious firms are multinational behemoths that employ hundreds of attorneys. But at Lewin’s old firm — which was acquired two decades ago by Baker Botts LLP, a Houston-based legal giant — the number of attorneys never surpassed three dozen. Other alumni include a who’s who of Washington power players over several administrations. Among them are David Cohen, current deputy director of the CIA; Stuart Levey, undersecretary for terrorism and financial intelligence at the Treasury Department under President George W. Bush; and Jamie Gorelick, deputy attorney general under President Bill Clinton.

“The people who came to us, both the summer law clerks and the associates, were people with fantastic records. We gave them a lot of opportunities to do exciting things because the litigation was interesting,” Lewin told Jewish Insider in a recent phone interview.

Today, Lewin operates an even smaller firm: Lewin & Lewin, a two-lawyer operation with his daughter, Alyza Lewin, who also serves as president of the ​​Louis D. Brandeis Center for Human Rights Under Law. She joined him first at Miller Cassidy, which she called an “extraordinary place.”

The pair has worked on several high-profile cases together, including that of Menachem Zivotofsky, who sued former Secretary of State John Kerry in 2014 in a bid to list “Israel” — rather than “Jerusalem” — as his place of birth on his passport. That was the first case Alyza argued at the Supreme Court, and when a journalist learned she would be arguing the case in lieu of her father, he asked Alyza if her father was sick.

“I tried to teach him what the word nachas meant. I said, my father really actually just wanted to shep nachas and sit back in his chair while his daughter argued her first case before the Supreme Court,” she told JI. “Working with my father has been a privilege and a joy, and a real blessing.” (They lost that case in the Supreme Court, 6-3.)

At 86, Lewin maintains a full caseload, and he filed a recent lawsuit on behalf of Ben & Jerry’s Israeli distributor, who is suing the ice cream maker and its parent company over its decision last year to stop selling its products in what it referred to as “Occupied Palestinian Territory.”

Even amid Lewin’s ongoing legal work, creating a firm that launched the career of three future Supreme Court nominees is quite the capstone for the lawyer from Lodz, Poland, who came to the U.S. as a young boy during the Holocaust.

The Senate Judiciary Committee’s four days of hearings for Jackson began Monday. Jackson, who currently serves as a judge on the U.S. Court of Appeals for the District of Columbia Circuit, would be the first Black woman on the High Court if she is confirmed by the Senate. Committee Chair Sen. Richard Durbin (D-IL) kicked off the hearings by praising Jackson’s “record of excellence and integrity,” while Sen. John Cornyn (R-TX) said Jackson’s past advocacy as a defense attorney has “gone beyond the pale.”

Lewin does not recall working with Jackson, who spent a year at the firm from 1998 to 1999, although he found the initials “KJ” scrawled in his notes from a case he worked on that year, suggesting she may have assisted him. (The case was about a school in Kiryas Joel, so the initials could also have referred to the town in New York.)

In 2020, amid Barrett’s confirmation hearings and concerns about her attitude toward the religious practices of American Jews, Lewin penned an op-ed describing what he viewed as a brief but noteworthy experience working together. “Having worked with Judge Amy Coney Barrett, I have seen her defend the rights of Jewish Americans firsthand,” Lewin wrote.

Barrett worked at the firm from 1999 to 2001 — just barely missing Jackson — at the time Lewin was litigating one of his signature cases. He helped the Chabad movement secure the right to place a menorah on public property in Jersey City, N.J., over the wishes of the American Civil Liberties Union.

The case was one of dozens that Lewin, an Orthodox Jew, has taken on representing Jewish clients over the course of his career. But when he was getting started as a lawyer, that was not his goal; he worked as a prosecutor at the Department of Justice as a young attorney, assisting in the trial of the infamous union leader and mob boss Jimmy Hoffa.

“These cases came to me because I guess people thought, ‘Look, here’s an Orthodox Jewish lawyer who clerked on the Supreme Court,’ which was pretty unusual in those days,” noted Lewin, who clerked for Justice John Harlan and has argued 28 cases before the Supreme Court. “I sort of became known to those who had some interest in litigation for Jewish causes, so almost as soon as I went out into private practice, I began getting calls about these kinds of issues.”

The connections that spawned Miller Cassidy date back to the Kennedy administration, when Lewin, Herbert “Jack” Miller and John Cassidy worked together at the Justice Department under Attorney General Robert F. Kennedy. The Hoffa trial, in 1962, was one of Lewin’s first, and it sent him to Nashville, Tenn., just before Yom Kippur.

“I had to inform the trial team of the fact that I would not be available,” Lewin recalled. He was unavailable for a day and a half for Yom Kippur, then two days for Sukkot and two more for Shemini Atzeret. “They’d been waiting for this fellow to come down to write their legal memoranda, and I was told they called up Bob Kennedy and said, ‘What have you sent us here?’ Turns out, they discovered that I was a workhorse, I guess, and on the days that I was available, produced a lot of stuff.”

Miller, who rose the ranks in the DOJ under Presidents John F. Kennedy and then Lyndon B. Johnson, later convinced Lewin to go into private practice with him rather than sticking around to work for President Richard Nixon.

“Of course, it turned out that ultimately we represented Richard Nixon when he resigned as president. But nonetheless, I agreed at that point to come as he was forming this law firm,” recalled Lewin, referring to one of his most high-profile clients.

The firm specialized in white-collar defense, and Nixon was just the first of several controversial clients that Lewin and his firm represented. “I’ve represented very unpopular men, I’ve represented unpopular clients. No question about it,” said Lewin.

In the 1970s, he represented Bernard Bergman, an Orthodox leader and nursing-home operator who was convicted of Medicaid fraud and bribery. Lewin and Alan Dershowitz currently represent Mike Lindell, the CEO of My Pillow who has been sued by Dominion Voting Systems in a $1.3 billion lawsuit related to Lindell’s claims that Dominion “stole” the 2020 election.

“What Mike Lindell did, and what he continues to do, is to say, ‘Look, I don’t believe that this election was free of fraud.’ He has a right to say that, and he has a right not to be sued for that,” Lewin explained. “I’m not claiming that I’m doing this pro bono or anything. He is a paying client. But his position in this litigation is, I think, fully correct.”

Those groups, such as the American Jewish Congress in its civil rights-era prime, often sided with liberal organizations like the ACLU, who felt strongly that the government could not endorse or “establish” a religion, while Lewin believed the more important part of the First Amendment allowed Americans to practice their religion freely. He is working on another such case now: Lewin is representing a congregant at an Ann Arbor, Mich., synagogue who argues that weekly anti-Israel protests, which have occurred in front of the synagogue on Shabbat for 18 years, impinge on his freedom of religion.

“The people who are standing around this Ann Arbor synagogue are there to harass and intimidate you if you’re trying to exercise religion, and the people who are defending them, including the ACLU, and the Jewish people who are signed on to the ACLU briefs, claim it’s only free speech,” said Lewin.

More recently, this divide has manifested in Carson v. Makin, a case that was argued before the Supreme Court in December. The Court is expected to overturn a Maine law that limits parochial schools’ ability to receive public funds on behalf of students in rural areas who do not live near a public high school. Lewin filed a friend-of-the-Court brief arguing in favor of overturning the law, while other Jewish groups including the Anti-Defamation League and the Union for Reform Judaism filed a brief supporting the Maine law.

In his own career, Lewin says he has faced limited discrimination for being an observant Jew. As a student at Harvard Law School in the late 1950s, students were required to take three classes on Saturdays. He and the one other Sabbath-observant law student in his section only had to take one, to which Lewin showed up each Saturday with no books, notebooks or pens.

Later, when he was thinking about career prospects, some firms “were out-and-out antisemitic,” recalled Lewin. “There were firms who clearly said, ‘We do not want to talk to any Jewish applicant, period.’ That was permitted before the Civil Rights Act.” The ones who were known to be open to Jews often refused to hire an Orthodox Jew who observed Shabbat. Starting his own firm meant he wouldn’t face that problem.

Miller Cassidy had a kosher kitchen for Lewin in its downtown Washington office, and Lewin said his colleagues applauded his travel to Israel and his work representing Jewish clients pro bono.

“If I had to work late, I would call him up and he’d say, ‘Can I make you dinner?’ And I’d say sure,” recalled Alyza, his daughter, who worked at another firm on the same street before she eventually joined Miller Cassidy to work with her dad. “I’d walk down the half a block and meet him for dinner and hang out with him and then go back to work.”

Now, the only law partner Lewin has to worry about is his daughter. But that’s not a problem for him.

“It’s fantastic,” he said. “It’s a capstone to a legal career if you can engage every day with your daughter, in trying to further the things that you’ve spent your life working on.”