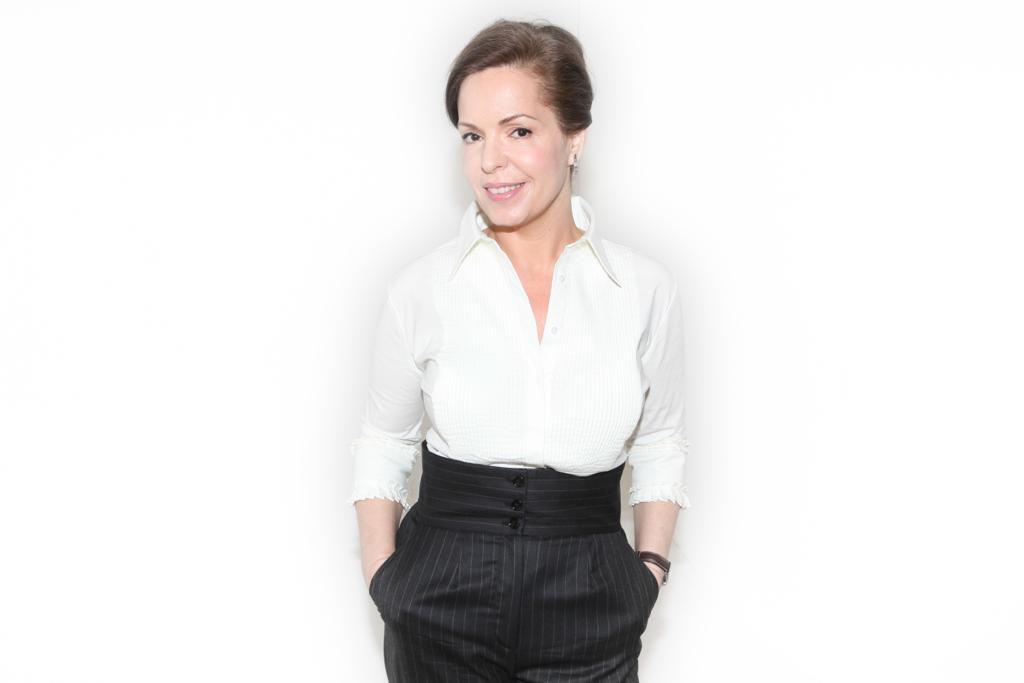 The Israeli attorney was a trailblazer in the country’s legal field. Now, she’s charting her own course in Washington

The story of how Shirin and Michael Herzog met is a fitting meet-cute for Israel’s Washington power couple. The tale begins in the heady Oslo days of the mid-1990s, when she was a corporate attorney at Goldfarb Seligman, one of Israel’s top law firms, and Mike was serving on the Israeli team that was negotiating with the Palestinians.

One of her friends in the legal field was now-Israeli President Isaac Herzog, who at the time was a practicing lawyer, and he pointed out that both Shirin and Mike — his brother — were spending a significant amount of time in Cairo.

“He told me, ‘Oh, by the way, are you single still?’ And I said, ‘Yes, why are you asking?’ And he said, ‘Would you like to meet my brother? He’s in Cairo negotiating with the Palestinians,’” Herzog recalled. The pair ended up meeting back in Israel, not Cairo, but things moved quickly.

“Three weeks from the day we met, I said yes. It was the third proposal,” Herzog told Jewish Insider in a recent interview at a Washington, D.C., hotel. They got married less than four months after they met, and 27 years later, in November, they arrived in Washington as diplomats: Mike as Israel’s ambassador to the United States, and Shirin as his support system, co-diplomat and — still — high-powered attorney.

“She and Mike just have a wonderful partnership,” said Karen Davidson, a personal friend of the Herzogs and a member of the board of directors of the William Davidson Foundation.

“We are two individual players in a united team,” Herzog said. “I’m here to support my husband, but I haven’t given up my career, [with] the full support and encouragement of my husband.”

Mike Herzog is the first Israeli ambassador to the U.S. in more than a decade to be selected by someone other than former Prime Minister Benjamin Netanyahu, who left office last summer. The Herzogs are making a point of reaching out to people of all political persuasions, faiths and backgrounds, following a decade that saw particularly close ties between Israeli officials and many in the Republican Party.

“We would like to engage with everyone. It’s an open tent,” she said. “Everybody’s invited, from all religions, from all denominations, on both sides of the aisle. Everybody.”

Politicians have a habit of referring to their spouses — and in a world where most politicians are men, that’s usually their wives — as their “better halves.” But Herzog is still a partner in Goldfarb’s corporate and technology unit. And while she is eager to engage in diplomacy, she intends to do so on her own terms and with her own skills, with a title that is much longer than “spouse.”

“She’s what an ambassador’s spouse is all about, being in their own right an accomplished person. I think that’s very important,” U.S. Ambassador to Israel Tom Nides told JI. “One of the reasons you get credibility in these jobs is in your own right. She’s a business person. She understands the Israeli politics. She understands the corporate world. She understands how to get things done. I’m sure she’d be a gracious host, but she’s way more than that.”

“I believe the personal touch is important,” explained Herzog, who noted that she had lived in the U.S. twice before, including once in Washington, giving her strong relationships to draw upon in these first few months. “It’s not just what you’re doing in the formal meeting in the office. You can get much more of a relationship if you expand it, if you bring who you are to the table.”

Born and raised near Tel Aviv, Herzog served as a commissioned officer in Israel’s version of the Navy SEALs. After her army service, when deciding what to study, she earned acceptance to both law school and medical school, and chose to study law at Hebrew University. After passing the Israeli bar, Herzog moved stateside.

“I came to New York with $1,500 and a dream, to try to get to study at NYU,” said Herzog. “This sounds like [what someone would say] in the beauty contest, I’m sorry, but I wanted to do something that requires hard work, but can help make a difference.”

She got her master of laws degree at NYU and went on to work at the law firm Simpson Thatcher, specializing in mergers and acquisitions. She stayed in New York for four and a half years, until “I became a New Yorker. And that’s when I said I need to go back,” she recalled. “I had my subscription to the opera. I was playing golf over the weekend on public courses. And I had, I would say, one quarter of a bed in the summer in the Hamptons, like a quarter of a rental, something like that. And I said, ‘If I don’t come back now, it will make me stay here.’”

Back in Tel Aviv, Herzog joined Goldfarb, eventually becoming its first female partner. (She signed her partnership agreement while out on maternity leave.) In recent years, she has taken to giving talks about what she calls the “scale-up nation,” an idea that she thinks better encompasses Israel’s current business environment than the popular term “startup nation” of years past.

“We are no longer only a startup nation. For years now, maybe 10 years, maybe longer, there is a phenomenon that is growing, that companies become more mature,” Herzog explained, and they are not all eager to sell their companies quickly, as many startups aim to do.

She has negotiated deals around the Middle East and traveled around the region well before the Abraham Accords connected Israel with several more Arab countries. Being married to a senior official in several rounds of peace talks didn’t hurt.

Shortly after they got married, Shirin and Mike were invited to visit Petra, Jordan, now a routine tourism spot for Israelis who can cross the border near Eilat. But at the time, just months before Israel and Jordan signed a peace agreement in 1994, such a trip was almost unheard of. Mike had a relationship with the Jordanians from other negotiations, although at first, “he didn’t disclose his name, because his father [Chaim Herzog] was president, and he was in the intelligence corps,” recalled Herzog.

“We were collected in Aqaba [Jordan] by a general. No stamps on the passport, nothing. And we were taken by a jeep, by the general, to Petra,” said Herzog. “It was wonderful. Just wonderful.”

The Herzog family is the closest thing Israelis have to the Kennedys. In addition to Michael and Isaac, there’s their father, an early immigrant to Mandatory Palestine who served as Israel’s president from 1983 to 1993. Herzog said she views her role in this family as a “shlichut,” or mission.

“I tell my children that they should, we should, not take anything for granted. They should know that they are under greater scrutiny and that matters. They should work harder. They should be nicer,” noted Herzog.

The Herzogs’ daughter, who is 22, is living with them in Washington at the moment after recently finishing her tour in the IDF. Their son Erel, who is 25, was named to the 2019 Forbes 30 under 30 list in Israel for his work leading FutureLabs, which created a virtual reality simulation for soldiers to practice combat skills. “This saves lives. It saves costs,” said Herzog. “Later on, it could be translatable to gaming,” which Erel is working on at a Tel Aviv startup.

Throughout her career, Herzog has at times worked with companies that focus on the environment, including Netafim, the first major drip-irrigation company in Israel. Herzog hopes to bring a focus on climate change to her work in Washington. “Research shows that climate change is a crisis throughout the world, but our region is going to be hit very, very hard,” said Herzog. “You need to get ready to tackle it. And we should join hands in finding a solution with our neighbors and with everybody else.”

Herzog also hopes to get involved with Sela, a Hebrew immersion public charter school in Washington with a diverse student body that will give her an opportunity to connect with an audience that is not Jewish or Israeli.

“This will be a way for us to show we are meeting everybody,” explained Herzog. “We are open to everybody. We would like to get everybody close to Israel, show Israel’s beautiful facets, the diversity of cuisine, the wine, the arts, the culture.”

Herzog said there are two activities that, more than anything else, make her happy. One of them is not an activity Americans can expect to see her take up in a diplomatic capacity, unless they catch her on “diplomatic travel” to the beach: windsurfing.

“I grew up rowing and windsurfing,” said Herzog. As a child who lived on the coast, “I was mostly in the sea. But I was a hard-working student.”

The other passion of hers has already made its way into her diplomacy.

“I told you the two things that make me happy. The second is singing,” said Herzog, who led “Hatikvah” at the embassy’s Hanukkah party in December, soon after she and her husband arrived. She said she plans to host a number of evenings this year for singing, “shira be’tzibur we say in Hebrew, singalong. We used to do those evenings in our home in Tel Aviv, and I’d like to bring them here. It makes me very happy to sing.”

Her husband is also a music fan — he plays the flute — but “he would say that as far as singing, our average is good,” she said, laughing.

Recently, Herzog was at home walking on the treadmill when “Bohemian Rhapsody,” the 2018 biopic of Queen singer Freddie Mercury, came on the TV. Most of her singing is reserved for Israeli songs, but Queen’s music has a habit of sticking in your head.

“I was alone in the entire room and found myself singing at the top of my lungs all the Queen music,” said Herzog. “I said, ‘I hope no one comes in.’”