Speaking alongside Sens. Schumer and Cardin, Amb. Michael Herzog framed Israel’s conflict with its foes as ‘a struggle between light and darkness’ 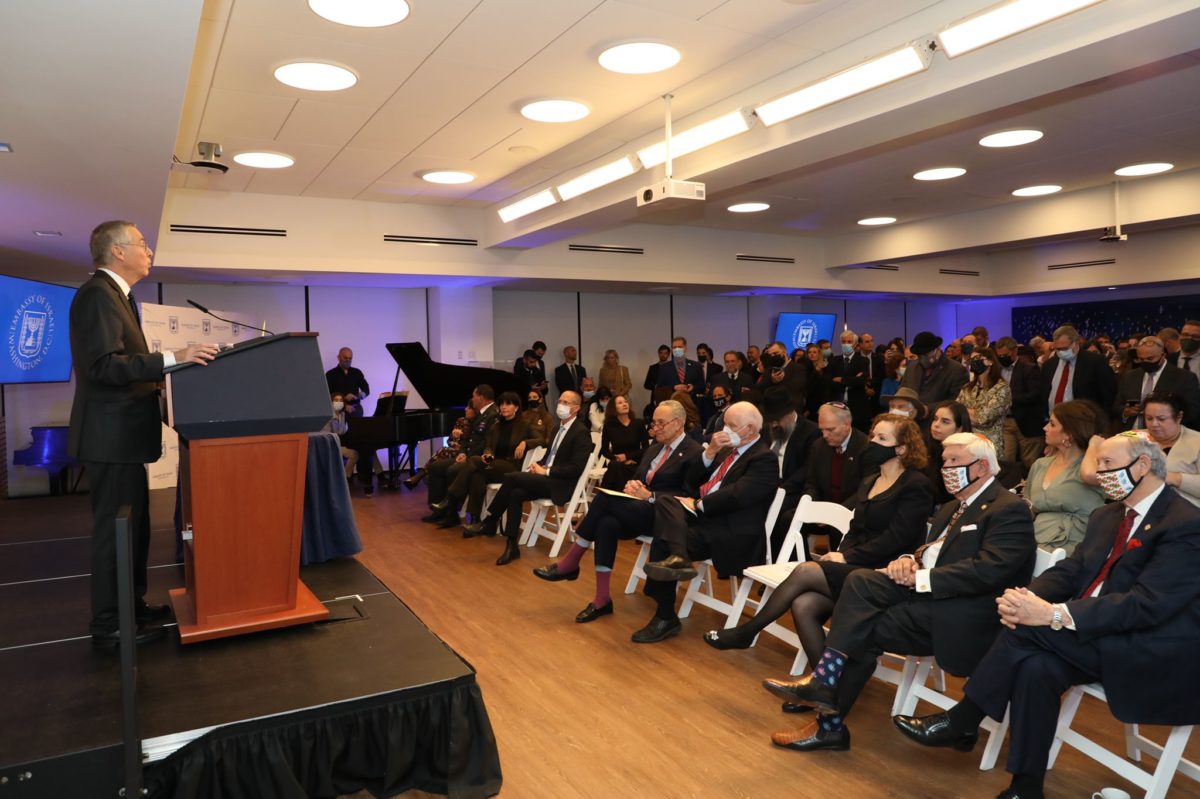 In his first public event as Israeli ambassador to the United States, Michael Herzog framed the conflict between Israel and its regional foes as a “struggle between light and darkness” and a fight against “radical forces who resist any progress.”

Hosting the Israeli Embassy in Washington’s annual Hanukkah party on Monday evening, Herzog said, “When I light this candle, I dedicate it to our effort to spread hope as well as to our unbreakable bond with the United States, our best friend and ally, which is a force multiplier in this quest for light.”

“May these flames symbolize the light that we will pursue together, in the quest for a brighter future for generations to come,” he added.

Herzog also compared the story of the Maccabees to that of the modern State of Israel, reaffirming Israel’s duty and ability to protect itself. The new ambassador’s comments came against the backdrop of renewed nuclear talks with Iran in Vienna, and a statement earlier Monday from Israeli Prime Minister Naftali Bennett opposing the negotiations.

“If our core identity and the values that define us are ever in danger, we as a nation must fight to maintain them and be prepared to make the necessary sacrifices, as our ancestors did,” he said. “The lesson of Hanukkah is as alive today as it was over 2,000 years ago. Today, we have a state that is thriving and strong, capable of defending itself against aggressors and ill-wishers.”

Herzog added that Israel’s “higher calling” is to “improve the lives of people in our neighborhood and beyond.”

“It is such an honor to be here at your first official appearance as ambassador to the United States,” Schumer said. “I know the relationship between the United States and Israel will grow even stronger with you here in Washington and with recently confirmed Ambassador [Tom] Nides in Yerushalayim. It’s a great team.”

Schumer, who sat shiva on Sunday night for his father, who died last week, noted that the Mi Chamocha prayer he recited at the shiva relates to the name of the Maccabees. “The first four words of the prayer – Mi Chamocha – start with the letters Mem-Khaf-Bet-Yod, which spells Maccabee,” the majority leader explained.

He also reflected on the meaning of Hanukkah.

“On the one hand, the season is a reminder that for millennia, Jews have been driven from our temples and our homes, oppressed by regimes who not only sought our subjugation, but also our annihilation,” he said. “In spite of that history of diversity, Hanukkah teaches us to never lose faith in Adonai’s divine presence… So many have tried to annihilate the Jewish people and our spirit. All have failed… But the Jewish people live on in America and in Eretz Yisrael.”

Cardin also related the Hanukkah story to that of modern-day Israel.

“The Maccabees rescued Jerusalem. Built the second temple. It shows that a small but mighty people can do wondrous things,” he said. “That’s the state of Israel. That’s what the state of Israel has been able to do in a part of the world where it’s a small nation, but a mighty nation. And it’s guided by its values. And that’s why this special relationship between the United States and Israel has only grown stronger over time.”

“Tonight we light the candle in hope for our future, recognizing that Israel and the United States are together in our commitment to make this world a safer world, for a more peaceful world for all — one in which our values, values of respect for each other, are embedded in our principles,” he continued.

The hanukkiah used at the event was one of three created for the Clinton White House by Maryland-based sculptor Zachary Oxman and lent to the embassy by Kira Epstein-Begal and William Begal.