‘Before I arrived, my expectations were at a certain level,’ Govrin told JI. ‘After arriving, however, I noticed that the reality was way beyond that’ 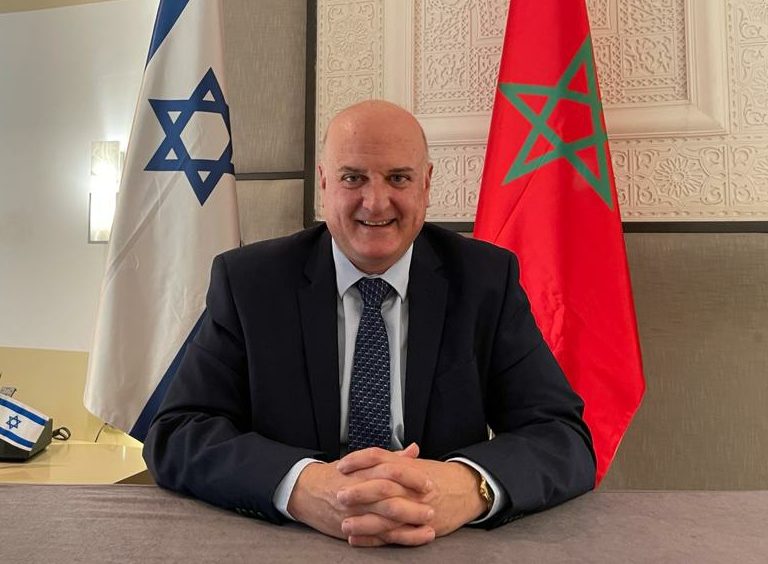 When Israel’s newly installed ambassador to Morocco, David Govrin, recently addressed a gathering of young Israelis and Moroccans in Marrakesh, he summed up his first 14 months on the job by recalling a conversation with a local official: “He asked me if I’d encountered any problems so far; I told him I had one big problem,” Govrin joked. “The food is simply too good here.”

While there is no doubt that delectable and intoxicating Moroccan fare, which is also wildly popular in Israel thanks to the nearly half a million Jews of Moroccan heritage who reside in the Jewish state, might not be good for the waistline, Govrin told Jewish Insider in an interview last week that his answer was the truth – he has received a warm and genuine welcome since arriving in the Arab country in January 2021.

“There’s a lot of enthusiasm,” Govrin told JI. “We feel it and see it every day, the people here are genuinely very excited about Israel.”

Govrin became Israel’s first ambassador to Morocco just a month after the two countries agreed to establish full and open ties in December 2020, and has been working to both establish a fully functional diplomatic mission and build people-to-people ties that will enhance the already warm peace that is rapidly growing between the countries.

A veteran of Israel’s foreign service and a fluent Arabic speaker, Govrin understands the difference between a peace that is warm over one that is not. A former ambassador to Egypt, from 2016 to 2019 – Govrin also served as first secretary in Cairo between 1994-1997 – he said Israel’s relations with the two Arab states differ wildly.

“One has to bear in mind that Israel and Egypt have engaged in five wars, this is not the same for Israel and Morocco,” Govrin began, highlighting that powerful segments in Egyptian society – the Nasserists and the Islamists – have remained an obstacle to Egypt’s ability to develop better personal ties with Israel.

During his short time in Morocco, Govrin has focused on building those cultural and people-to-people relationships. From a young leaders’ seminar last month in Marrakesh to a Jewish women’s festival in the Mediterranean city of Tangiers to mark International Women’s Day, he said it has been easy.

“Before I arrived, my expectations were at a certain level,” Govrin admitted. “After arriving, however, I noticed that the reality was way beyond that. There’s so much enthusiasm and the people here are very excited and eager to visit Israel.”

Indeed, the new consular section, which did not exist before Govrin’s arrival, has received endless inquiries and requests from Moroccans wanting to visit Israel. Israeli airlines began direct flights to Morocco last summer, and the first Moroccan airline held its inaugural flight from Casablanca just over a week ago.

What sets Morocco apart from other Arab states, Govrin explained, is that “the Moroccan people fully understand the importance of the peace with Israel” and feel connected to Jews because of the community’s long presence in the country.

“They have a positive and forthcoming approach to Jews because the Jews were an integral part of Moroccan society, history and heritage for many centuries,” he continued. “This has helped us to push the relationship forward.”

Jews have had a permanent presence in Morocco for more than 2,000 years and with the arrival of Jews from Spain and Portugal – following their expulsion in 1492 – their impact in the country grew even further. Today, while the community has shrunk from an estimated 250,000 to 300,000 in the mid-20th century to only about 2,000 – most fleeing following waves of antisemitism after Israel’s creation –  those still living in the country remain openly and actively Jewish.

“In Morocco, the Jewish presence was welcomed for many years by the kings, and [the current leader] King Mohammed VI is very supportive and encouraging as far as relations with Israel are concerned,” said Govrin. “And we have to bear in mind that leaders play a role in sending a message to their citizens.”

As for the thorny issue of Israel’s conflict with the Palestinian, which served been a point of contention for many Arab countries and prevented them from normalizing ties with Israel for decades, Govrin said the subject feels distant in Morocco. There were a handful of protests against the resumption of relations with Israel in December 2021, but following a recent national election in the country, the strongest voices opposed to normalization with the Jewish state – the Islamists – are now on the margins.

“Morocco’s foreign policy is led by the king and [since] the Islamists are no longer part of the governing coalition, their presence in parliament was greatly diminished, and as far as the relationship between Israel and Morocco goes, we feel that the majority of Moroccans are very much in favor of bilateral ties,” he said.

“The perception of the Palestinian issue changed here following the Arab Spring,” continued the ambassador, author of a 2016 book about the ideological upheaval caused by the wave of popular protests that swept the Arab world a decade ago. “People here are focused more on domestic issues and the Palestinian issue is just one of many other regional conflicts.”

For Israel, Morocco is both a natural ally and a strategic asset exactly because it sits at the gateway to two continents, and, said Govrin, the Jewish state is utilizing the renewed relationship to expand cooperation on multiple levels – diplomatic, economic and cultural, as well as security cooperation.

In the short space of time since he arrived in Rabat, Morocco’s capital, he has already welcomed a slew of top Israeli officials from Foreign Minister Yair Lapid to Defense Minister Benny Gantz to Economy Minister Orna Barbivai. Visits that have paved the way for stronger and deeper cooperation, said Govrin.

“We’ve achieved a lot over the past year,” the ambassador finished, and while COVID-19 has hampered the process somewhat, he promised that a reciprocal visit by a top Moroccan official to Israel is likely to happen very soon.