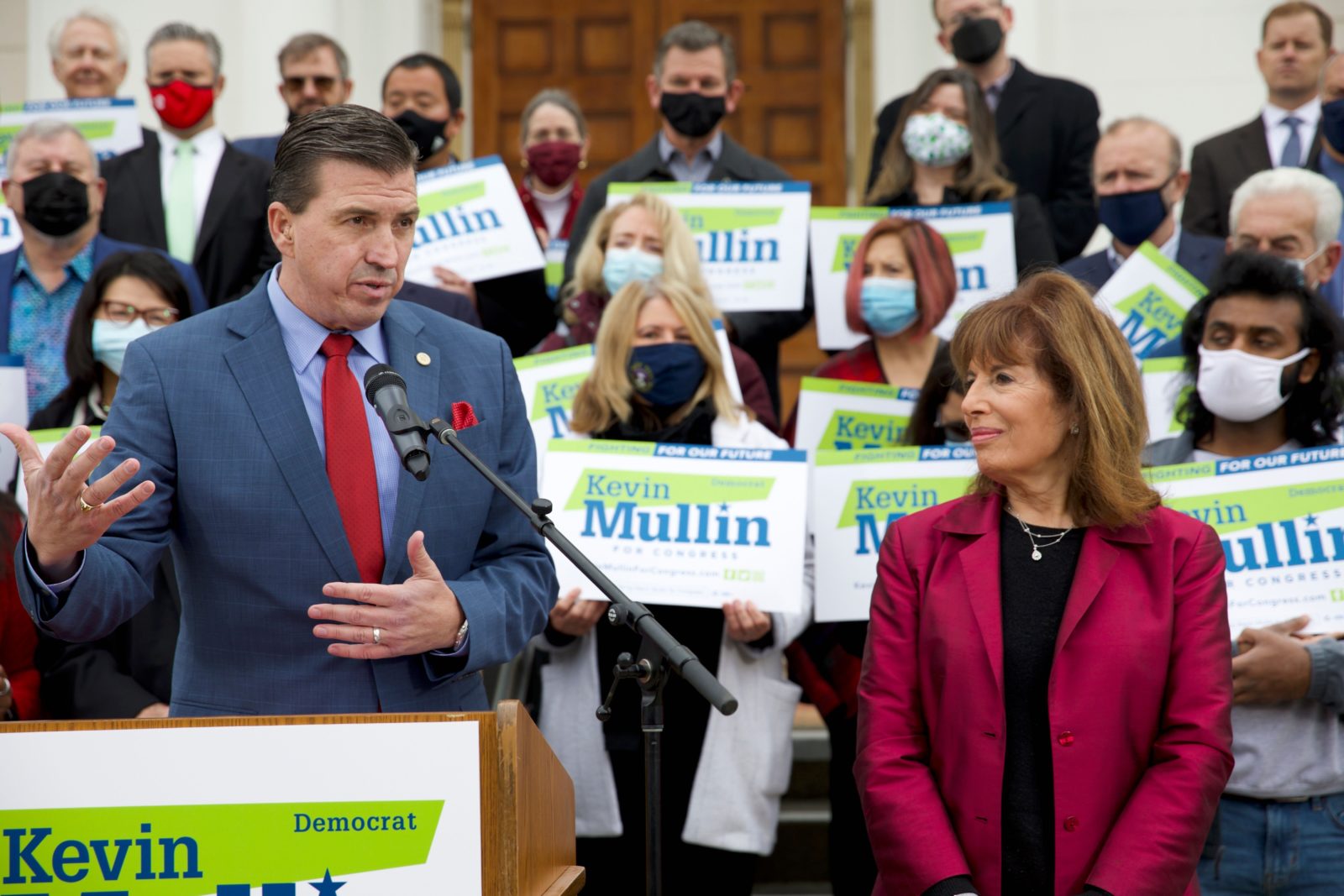 David Canepa and Kevin Mullin are vying to succeed Rep. Jackie Speier, who announced her retirement from Congress in November

The open-seat race to represent California’s newly drawn 15th Congressional District is increasingly taking shape around two leading Democratic primary candidates whose competing policy objectives typify some of the finer distinctions between the moderate and activist wings of the party.

On the far-left flank is David Canepa, a 46-year-old San Mateo County supervisor and Squad-aligned progressive who touts his support for such policy goals as Medicare for All, the Green New Deal and what he describes as a “Marshall Plan” for affordable housing.

Meanwhile, Kevin Mullin, a state assemblyman in South San Francisco, is dominating the establishment lane as he racks up endorsements at the federal level from Reps. Anna Eshoo (D-CA), Jared Huffman (D-CA) and Jackie Speier (D-CA), the outgoing representative, who announced in November that she would not be seeking reelection. Mullin, 51, shies away from the language used by his opponent, arguing in favor of, among other things, “climate resilience” and an “economy for all.”

On foreign policy matters, particularly in the Middle East, the two candidates also part ways along relatively familiar lines, even if the differences are, at first glance, somewhat more difficult to parse.

Mullin, for his part, cast himself as a more traditional “pro-Israel lawmaker” in an interview with Jewish Insider, expressing reverence for America’s longstanding relationship with the Jewish state. “This friendship and allyship,” he said, “transcends presidential administrations and governing coalitions.”

The congressional hopeful favors continued U.S. military assistance to Israel guaranteed in a 10-year Memorandum of Understanding between the two countries. He also backs legislation providing Israel with $1 billion in supplemental funding for its Iron Dome missile-defense system. “These are all crucial elements,” he said, “of maintaining America’s support for Israel.”

Mullin rejected the Boycott, Divestment and Sanctions (BDS) movement as discriminatory because it singles out the Jewish state and says he will push to fortify America’s economic ties with Israel if he is elected.

In a separate interview, Canepa emphasized what he described as a “firm commitment” to strengthening the “critical relationship” between the U.S. and Israel. But he insisted that “we can’t be afraid to criticize” the Israeli government on the “issue of taking properties and lands” from the Palestinians. “These are tough conversations,” he told JI. “But they have to be had.”

Both candidates endorsed a two-state solution to the Israeli-Palestinian conflict. But while Canepa argues that Jerusalem must serve as the capital of “both nations,” Mullin does not believe the U.S. should dictate the terms of any future arrangement. Instead, he suggests that American officials can help create the conditions for an outcome that respects “the self-determination of both the Israeli and Palestinian people,” according to a lengthy position paper.

Mullin and Canepa are also broadly in favor of the Biden administration’s renewed efforts to negotiate a nuclear agreement with Iran, even as Mullin expressed some reservations over “shortcomings” in the original deal. “At the end of the day,” he said, “it’s not about containment or appeasement, it’s about how we prevent a nuclear Iran, for Israel security and for the world’s security.”

“We don’t want to go to war with Iran,” Canepa stressed. “But Congress should have authorization to engage in military operations against Iran if it continues to pursue nuclear activities.”

But in contrast with his opponent, Canepa — who, like Mullin, has never visited Israel — was clearly unversed on a number of basic issues concerning the Middle East.

Asked about his views on BDS, for instance, Canepa indicated that he was unaware of the movement. “You know, BDS, I support BDS,” he said at first. “BDS meaning, can you explain that to me again? I think I know what that is.”

He paused after JI had offered a summary. “I don’t think I’m in support of that,” he said. “Let me get back to you on that one.”

Later in the conversation, he offered a clarification. “I wanted to get back to BDS, which is really, really important,” Canepa told JI. “I do not support BDS. Make no mistake about it. That goes too far for me. It really does.”

While Canepa said he is in favor of additional Iron Dome funding, he was not familiar with the Memorandum of Understanding and asked for an explanation from JI.

“I’m in support of that,” he said, adding, “Anything that we can do to support Israel, we should do that.”

Canepa’s claim is consistent with a position paper, written with the liberal Israel advocacy group J Street, in which he loosely argues that the U.S. should “continue to provide aid to Israel, while also resuming humanitarian and other forms of economic assistance to the Palestinian Authority and to the UN agencies that serve Palestinian refugees.”

In conversation, he expressed support for legislation introduced by Rep. Andy Levin (D-MI) — and supported by J Street — that would place restrictions on U.S. aid to Israel while condemning Israeli settlements. “Basically, what I would do is probably ally myself with him,” Canepa said of Levin, “and oppose actions that obstruct a two-state solution.”

“There are a lot of people much smarter than me on this, I mean, people who are scholars and academics and people at the State Department,” he said of the security funding. “I would really lean on them as well in terms of decisions and decision-making.”

Laura Birnbaum, J Street’s national political director, said local leaders in the Bay Area “have met with and had productive discussions with” Canepa — as well as Mullin and one other candidate in the race — on such matters.

For his part, Mullin also acknowledges that he is somewhat inexperienced in the Middle East foreign policy realm. But he says he has been studying up in hopes that he will be able to address the issues with some command in the House.

“Part of this process of being a candidate and, if I’m successful, a freshman congressmember, is to immerse yourself in the nuances of the situation,” he told JI. “I certainly have my philosophy and I have my grounding — I’ve followed these issues over the years — but not in a policymaking context and not in a way that I’ve actually had to, frankly, articulate.”

In recent months, Mullin has sought guidance from a number of Jewish leaders and pro-Israel advocates in California. Jesse Gabriel, a fellow Democratic assemblyman in Encino who chairs the Jewish Caucus, said he has been encouraged by Mullin’s engagement. “He’s the kind of person who does his homework and really wants to hear what people in the community have to say,” Gabriel told JI. “He’s spending a lot of time to get fluent with these issues and to understand things in detail.”

“He hasn’t had much opportunity to act on foreign affairs in the state legislature, but he has always been strong on BDS and promoting trade between Israel and California,” Sam Lauter, a Jewish community activist in San Francisco, said of Mullin.

Lauter, who serves as a board member of Democratic Majority for Israel and A Wider Bridge, the nonprofit organization that connects LGBTQ communities in the U.S. and Israel, expressed reservations over Canepa’s Middle East foreign policy approach. “He just doesn’t understand the issue,” said Lauter, noting that Canepa had weighed in on the conflict between Israel and Hamas last May with a message that some local pro-Israel advocates viewed as dismissive of Israeli security concerns as well as the broader dynamics at play in the region.

“Peace for Palestine,” Canepa wrote, concluding his missive with a string of victory hand and Palestinian flag emojis.

In the interview with JI, Mullin said he could not comment on Canepa’s positions. “I just know what my position is, and it’s going to be unequivocal in terms of standing with Israel and honoring the traditions of allyship and friendship and that unshakable bond,” he noted. “To that end, I think part of this process will be further educating myself.”

“What can be done to further those goals?” Mullin said he is now wondering as he makes his first bid for federal office.

He touted his commitment to upholding bipartisan support for Israel in the House, even as he recognizes that such “unanimity” may have “frayed somewhat” during the administration of former Israeli Prime Minister Benjamin Netanyahu.

“We need to do whatever we can to rebuild that strong relationship,” said Mullin, who adds that he was “encouraged” by President Joe Biden’s meeting with the current Israeli prime minister, Naftali Bennett, last summer in the Oval Office. “I think it’s going to be strong regardless, but I want it to be a little more visible.”

The matchup between Mullin and Canepa hasn’t yet drawn national attention, and pro-Israel groups have so far mostly refrained from weighing in publicly on a race that is largely focused on local concerns such as affordable housing and the ravages of climate change. The updated Bay Area district remains heavily Democratic.

“We have not yet made any endorsement decision,” Birnbaum, of J Street, told JI. “Rep. Speier has been a longtime friend and ally of J Street, and we look forward to continuing to have a strong relationship with the next representative to hold this seat.”

On Monday, Democratic Majority for Israel’s political arm announced it is backing Mullin in a new round of candidate endorsements.

The two other candidates in the four-way primary are Burlingame Councilwoman Emily Beach — who has also spoken with J Street — and  Redwood City attorney Andrew Watters, who loaned his campaign $10,000 but has otherwise raised no money from individual donors, according to the latest filings from the Federal Election Commission.

There is limited publicly available polling on the race, but a recent survey commissioned by the Canepa campaign put the San Mateo County supervisor in the lead with 19% of the vote. Mullin was two points behind at 17%, and Beach came in at 7%. A plurality of voters, 43%, were undecided.

Corey Cook, the executive vice president and provost at St. Mary’s College of California, who specializes in local elections, suggested that it is too early to draw conclusions from the polling.

“The key question is whether the high-profile endorsements for” Mullin “will matter in what appears to be a rough midterm election for the Democrats,” Cook told JI. “He’s definitely consolidated the party support but this far out it’s hard to discern how much — or if — that will help him.”

Previously, Canepa served as a councilman in Daly City, where he also resides, between 2008 and 2016. He was the town’s mayor in 2014. He says he is running because he wants “to stand up for underserved communities,” including people of color, women and seniors, “to bring the resources they need to succeed in America.”

Prior to joining the Assembly in 2014, Mullin served as a councilman as well as a mayor in his hometown of South San Francisco. He was “moved to run” because of what he criticized as “attacks on our democracy” from “red states across the country who are trying to undermine elections.”

Regardless of the outcome in his own primary, Mullin said he is actively mulling the possibility of visiting Israel this summer as part of what he views as an ongoing effort to learn more about the conflict. “There’s reading newspaper articles,” he told JI, “and then there’s actually being on the ground.”