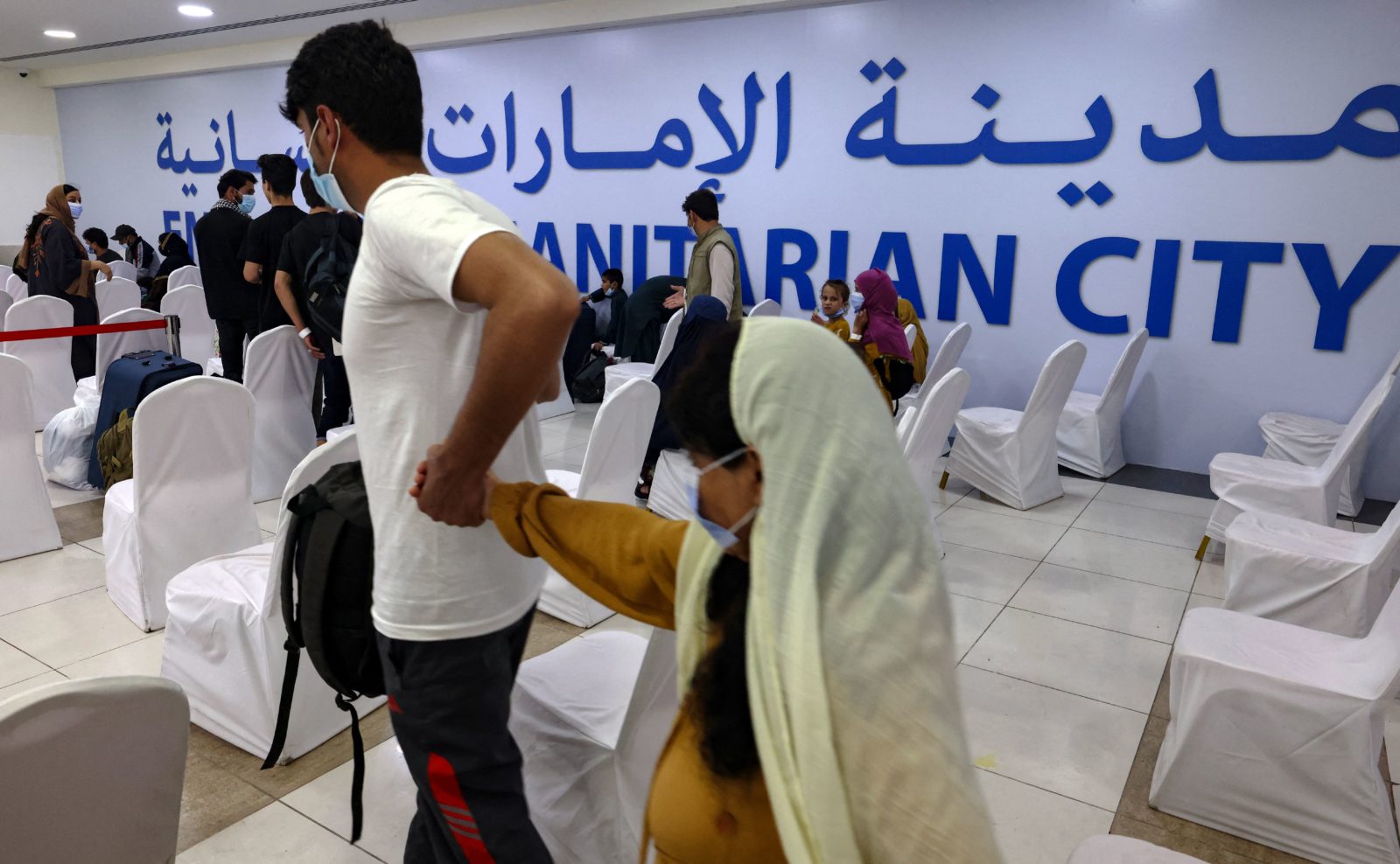 The story of Rodoba Noori’s harrowing evacuation from Afghanistan

This article first appeared on The Circuit.

For five months, Rodoba Noori, 20, an Afghan refugee from the town of Herat, has resided inside the stark, white-walled rooms of Emirates Humanitarian City (EHC) in Abu Dhabi, alongside 10,000-12,000 other Afghan refugees, following the Taliban takeover of the country last August. Most are still in limbo awaiting answers to their entry status to the United States or to other countries. Some still don’t know where they will go. Noori is one of the few whose days of waiting will soon be over. She is on route to Canada, where she will join her mother, who also escaped, before continuing her studies at Bard College, a private liberal arts college in upstate New York, where she was recently admitted on a full scholarship.

Noori’s harrowing evacuation from Herat in August and planned move to Canada are due to the efforts of IsraAID, an international non-governmental humanitarian aid organization based in Israel, and Noori’s friend Danna Harman, a former journalist, activist and now staff member at IsraAID.

Noori’s story is one shared by thousands of refugees from Afghanistan whose lives have been completely uprooted. On Aug. 21, six days after the Taliban took control of Afghanistan, faced with an uncertain life at the hands of the new government — particularly regarding the status of women — Noori felt she had no choice but to flee. There was the possibility of being killed, and the possibility of long-term separation from her family, but for Noori, her future depended on it.

On Aug. 13 the Taliban captured Herat, the country’s third-largest city. Before its takeover, even as she heard that fighting had begun, Noori hadn’t thought to abandon the only country she’d called home. “It was such a hard day for me when my city was captured,” she told The Circuit on a Zoom call. “I realized that everything is going to change. I would have been like a prisoner in my home and wouldn’t be able to leave for my education.”

In Herat, Noori was studying medicine at Herat University. Her dream is to become a doctor — one spurred by her late father’s cerebrovascular disease.

Noori’s mother told her that if she wanted to fulfill her dream, then she needed to leave. “It is not your place anymore,” Noori recalled her saying, urging her to flee with her younger brother, Abdul Rashed, 14.

“After the Taliban came, all women had to stay in their homes; we could not leave without one man who was either a brother, husband, father or son,” she said. Noori said that, contrary to what the Taliban has told the media about the situation improving for women and girls in the group’s second takeover of the country, women’s rights have disappeared again. “They are telling lies,” she said. “Three months before [the] Taliban returned, we were free and now we are not. [The] Taliban even sent letters to my university threatening that if they opened the doors to the university, they would attack it with suicide attacks. No one has been able to return to school.”

“Under Taliban rule, women and girls cannot leave a room without a man,” continued Noori. “Before [the] Taliban we were so free. We could go to school, go out as we pleased, be with men and talk to the media. We could travel to other countries alone as women. We had lots of freedoms.”

In addition to her medical studies, Noori was also a member of Afghanistan’s first-ever robotics team. It was through that experience that she met Harman, who traveled to Afghanistan in 2017 to report on the team for The New York Times.

“When I was with the robotics team, I had the chance to get out of Afghanistan, but I didn’t because my family was in Afghanistan, my friends, relatives; Herat was my hometown and my father was also there,” recalls Noori. “There was no reason for me to go then. Sometimes, though, you need to do things you don’t want to do.”

Harman and Noori became close friends, and it was Harman whom Noori called when she was seeking to flee Afghanistan. Harman called IsraAID and the organization, through an arduous and nail-biting process that involved passing numerous Taliban checkpoints, helped Noori and her brother, along with dozens of others that included women’s rights activists and female athletes, flee Afghanistan to Tajikistan and then to Abu Dhabi, where they now await their papers to immigrate to Canada.

Noori recounts the terrifying journey out of Afghanistan with pain, compassion, sadness and, at times, even laughter. On Aug. 21, she and her brother boarded buses leaving for Kabul, a grueling, 24-hour journey. There was no air-conditioning on the bus and there were no bathrooms. “There was nothing to wash our hands with, and even the streets when we went outside were completely destroyed after the Taliban’s attack. “Me and my brother couldn’t sleep on the bus.” It was also her brother’s first trip ever out of Herat. Banks were closed wherever they went, making it impossible to get money.

When the siblings reached the Afghan capital of Kabul, they spent the night at the home of Noori’s classmate. It was then that Harman helped her find transportation options to get to the airport to board an evacuation flight. There were three different buses: one for employees of the German government; one for those working for The Los Angeles Times; and a third for others wishing to get into the airport. “I kept jumping from bus to bus because sometimes the Taliban would change their mind and not let a certain bus into the airport,” Noori recalled. “When one bus was told not to go, someone would call me to run and get another bus.” She and her brother spent nine days, from Aug. 22-30, jumping from bus to bus. They ate and slept on the buses. “We didn’t have money to buy good food, so we ate junk food.”

Harman helped Noori and her brother get an invitation letter to Germany, so they boarded the German government’s bus. But when they finally reached the airport and the Taliban read the list of those who had permission to enter the airport to board a plane, she and her brother’s names were missing. “Then the Taliban fired their guns as people went to the airport; we were so scared, but I kept showing the Taliban men my invitation letter for the airport, but they refused me, saying my name wasn’t on the list,” she recalls. One of the officials told her to tighten her head scarf, remarking that a few hairs were loose. “I was so close to the airplane; I couldn’t lose my chance and so I kept showing my invitation letter, but he wouldn’t let me in.”

It was 2:30 a.m., and Noori and her brother finally left the airport — tired, exhausted and with their hopes dashed of getting on a plane. ‘’It was the scariest night of my life; I couldn’t even go to my friend’s house as it was so late and her father kept complaining when we were there that he didn’t have extra money to help us, so that night we had to sleep on the street.” It was a full moon, she recalled, and they went to an area where there happened to be many dogs. Noori, usually afraid of dogs, fought her fear but began to cry. “But I hid my tears from my brother because I didn’t want him to see my weakness,” she recalls. “Then, The Los Angeles Times bus called me again and told me where to come. but again it wasn’t successful, and we couldn’t make a flight out.” Noori recalled watching how most evacuees at the airport weren’t Afghanis but foreigners.

Finally, on Aug. 26, she and her brother got a break. They managed to board a bus, showing their letters at the airport — this time, however, their names were on the list. But a suicide attack that day, which killed 13 U.S. soldiers and 70 Afghan citizens, rocked the airport, and once again they couldn’t leave. Harman advised them to take a bus bound for neighboring Tajikistan. After so many failed attempts trying to leave from the airport, it was the only way out. That bus brought them to Kunduz City, on the border with Tajikistan. “Taliban opened the border and said they were sending us to Tajikistan. They even hit some women telling them to leave and go,” she recalls. “The night before, the Taliban had celebrated taking over Afghanistan.”

The Taliban put them in another bus in Kunduz City, telling them they were going to Tajikistan, but in fact the bus was heading back to Kabul. When Noori realized this, she called Harman to tell her. “Everyone on the bus was yelling and screaming not to go back to Kabul,” she remembered. The driver and a security man in the bus were both from the Taliban. Suddenly, the bus stopped in a deserted area and a Toyota Corolla arrived. “We thought maybe they brought us here to kill us, and everyone on the bus started crying,” recalls Noori. “But instead, they just wanted to send us off the bus. The passengers stayed at different homes nearby for several days until they finally managed to cross the border to Tajikistan by car. The IsraAID team had spoken to the Taliban and gotten permission for the group to cross.

“I remember how on the border to cross into Tajikistan there was a river, and I remember thinking how I was leaving my spirit behind in Afghanistan — it was just my body crossing the border to a new country,” said Noori.

There, in Dushanbe, Tajikistan, she happily reunited with Harman after an absence of three years. On Sept. 6, Noori and her brother became part of a 42-person group of refugees assisted by IsraAID that boarded a flight to Abu Dhabi.

“The UAE were particularly helpful and quickly approved this group because of the Israeli connection, which was very important for them,” Yotam Polizer, the CEO of IsraAID, told The Circuit.

IsraAID had called numerous countries around the world seeking a home for the Afghans trying to flee, and the UAE was one of the only ones that would take in the refugees. “This is not a job most of us do for a living, but we all felt compelled to help,” Harman told The Circuit. “We started looking for ways to help Rodoba, and then other girls on the robotics team heard about it and asked me for help and the group grew.”

Harman is now in Albania, where she helped to rescue IsraAID’s second group of refugees from Afghanistan, which includes Noori’s mother, who went to Tajikistan on Sept. 29 and then was flown to Canada, where she awaits her daughter and son.

For Noori, the trek toward a new life is almost complete. Her immigration papers are expected to be ready by March and then she will go to Canada. If all goes as planned, just over six months since leaving Afghanistan she will finally be free to live the life she wants.