A Jew on ‘The View’? Some say it’s long overdue

In the wake of Whoopi Goldberg’s comments, Jewish thought leaders consider a potential Jewish co-host for the long-running show 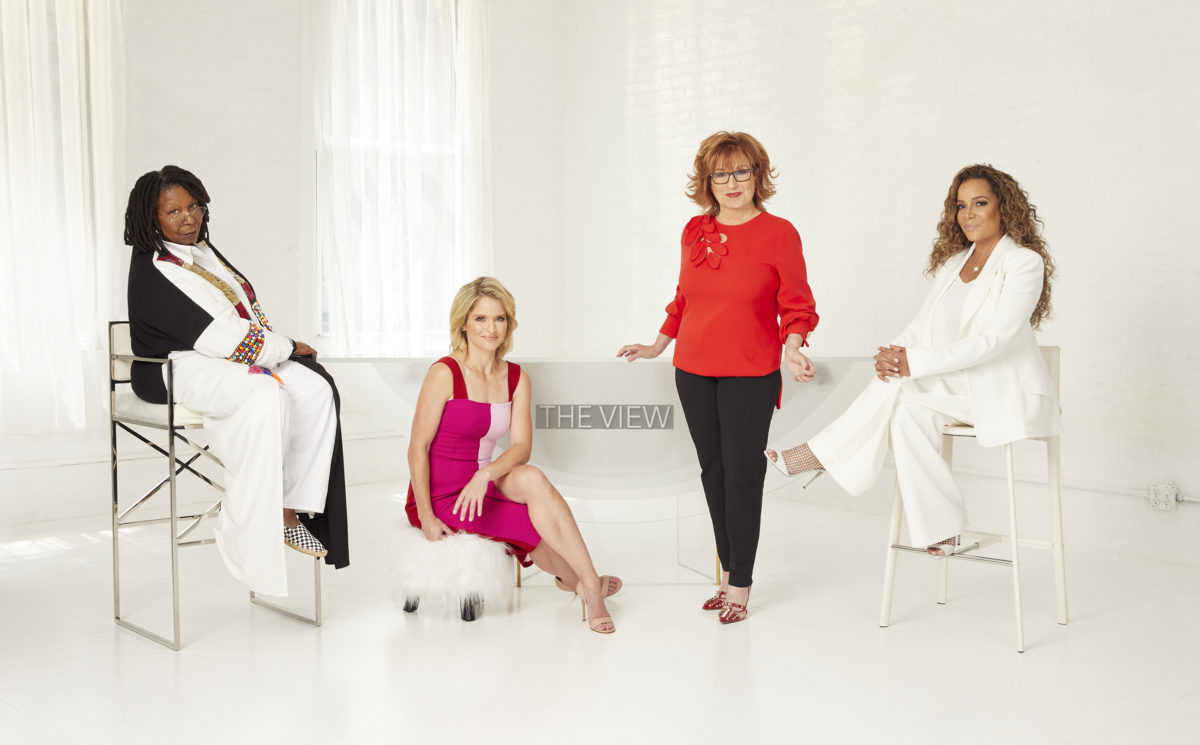 Amid the intense fury over Whoopi Goldberg’s controversial assertion that the Holocaust was “not about race” because it had involved “two groups of white people” — as the actor and comedian said on an episode of “The View” this past Monday, sparking widespread condemnation — was a somewhat more constructive plea from Jonathan Greenblatt, the chief executive of the Anti-Defamation League, that has largely gone unaddressed.

Appearing on the show a day after Goldberg had made her remarks, for which she has apologized, Greenblatt took the opportunity at the end of a long and emotional discussion to suggest that the panelists consider enlisting a Jewish co-host.

“I know you guys believe in representation, and I know you guys work to bring all points of view,” Greenberg told the group before offering his advice. “Think about having a Jewish host on this show who can bring these issues of antisemitism,” he said, “who can bring these issues of representation to ‘The View’ every single day.”

Joy Behar, one of four panelists on the long-running ABC talk show, laughed somewhat uncomfortably. “I guess I don’t count because everybody thinks I’m Jewish, but I’m not,” said the liberal co-host, “so maybe you’re right.” The discussion concluded just a couple of minutes later.

Greenblatt’s suggestion was hardly an idle one. While Goldberg was suspended by ABC on Tuesday for two weeks, another seat has been vacant for months since a former co-host, the conservative foil Meghan McCain, quit last August. The search for a permanent replacement remains ongoing as the seat has been occupied by a rotating cast of guest hosts including Condoleezza Rice and Gretchen Carlson.

A spokesperson for ABC did not respond to a request for comment from Jewish Insider about whether the network is considering hiring a Jewish panelist following the backlash elicited by Goldberg’s remarks, which were criticized for their ignorance of the explicitly racial motivations behind the Nazi genocide of European Jewry.

Out of 22 co-hosts who have worked for “The View” since 1997, when the show was created, only two have been Jewish, the last of whom, the comedian Michelle Collins, departed in 2016 after just a year in the role. The broadcast journalist Barbara Walters, who helped launch the show 25 years ago, retired from her seat in 2014.

On Thursday, Greenblatt followed up on the conversation he had started, after JI inquired about his own preference for the seat. He had two picks, provided by way of an ADL spokesperson: the actress Debra Messing, who has put her Jewish identity front and center in speaking out against antisemitism and other injustices, and Juju Chang, the Korean-American “Nightline” anchor on ABC News who converted to Judaism in the 1990s after her marriage to the media executive Neal Shapiro.

The spokesperson said Greenblatt considered Messing and Chang to be “great choices” but had no further comment.

Noa Tishby, the Israeli actress and author who splits her time between Tel Aviv and Los Angeles, said she agreed wholeheartedly with Greenblatt’s broader suggestion that “The View” consider hiring a permanent Jewish panelist. “I think the idea of adding a Jewish host is incredibly important,” she told JI in a phone interview, “especially with the skyrocketing antisemitism.”

Tishby, who has appeared as a guest on the show and described herself as a fan and longtime viewer, said the panelists often “set the tone for pop culture conversations in America.” The fracas over Goldberg’s comments, she added, has given the show a unique “opportunity to learn” more proactively about issues of particular concern to the Jewish community.

With that in mind, JI asked a range of Jewish figures from across the media, entertainment and nonprofit worlds about who they would prefer to see navigating such questions if “The View” were to hire a Jewish co-host.

Silverman, the actress and comedian known for her raunchy humor and provocative commentary, was among the candidates most frequently suggested.

In recent months, she has placed herself at the center of a high-profile debate over representations of Jewish women in Hollywood, after criticizing what she described, on her podcast this past fall, as a “pattern in film” and TV in which non-Jewish actors are cast as Jewish characters — a topic of discussion that seems particularly well-suited for a show like “The View.”

Joshua Malina, the former “West Wing” actor who is himself the co-host of a new Jewish-themed podcast, “Chutzpod,” offered an additional vote in Silverman’s favor. “She’s a sharp, fierce, independent thinker, who has been making trenchant social commentary for decades,” he told JI. “She’s endlessly funny and has a huge, Jewish heart. She’d be perfect.”

“I think there’s no one better suited for that slot,” Maer Roshan, the editor of Los Angeles magazine, said of Silverman.

Another commonly cited pick was Bari Weiss, who has already appeared on “The View” as a guest host. The former New York Times editor who publishes a popular Substack newsletter, “Common Sense,” has previously expressed concern over instances in which, as she wrote for Tablet two years ago, “Jews are flattened into ‘white people,’ our living history obliterated, so that someone with a straight face can suggest that the Holocaust was merely ‘white on white crime.’”

In social media comments on Monday, Weiss reiterated that view in describing Goldberg’s remarks as a “whitewashing of the Jewish people and Jewish history.”

Bethany Mandel, the conservative columnist who is outspoken on Jewish issues, said that Weiss could help bring a renewed focus to addressing antisemitism in a manner that, she believes, has been lacking since McCain left the show.

But she was equally enthusiastic in recommending a somewhat lesser-known journalist who would be a “provocative” addition to the cast: Batya Ungar-Sargon, the former opinion editor of The Forward who now serves as a deputy opinion editor at Newsweek.

“She talks about the class issues that are happening, especially with regard to COVID, and that’s not a conversation that anyone is having,” Mandel told JI, adding that Ungar-Sargon is “powerfully equipped to handle” the subject of antisemitism as well.

John Podhoretz, the Commentary editor and New York Post columnist, said that Mandel herself was his choice for the job, but he declined to elaborate beyond that.

In an email exchange with JI, Sadie Stein, a freelance culture writer and a former deputy editor of The Paris Review, put forth a seemingly more improbable suggestion: Naomi Fry, the New Yorker staff writer who grew up in Israel and covers pop culture and celebrity news with wry authority.

“I’m not sure what would be in it for her,” Stein added.

Allison Josephs, the founder and executive director of Jew In the City, a nonprofit dedicated to countering stereotypes associated with Orthodox Judaism, said religious Jews have, in her observation, largely been excluded from “The View,” if not mocked outright in some discussions.

One episode that she mentioned, from 2009, drew criticism from the Chabad-Lubavitch community after the Jewish actress and comedian Susie Essman, promoting her role as a Lubavitch woman in the TV movie “Loving Leah,” offered an uncharitable assessment of Hasidic fashion customs that received little to no pushback from the panelists.

“I think this Whoopi Goldberg saga is a positive overall moment because it allows a conversation to come out that has needed to be talked about for some time,” Josephs said.

Adding a Jewish co-host to “The View” would help bring a “more diverse perspective to the conversation,” said Josephs. Listing a few people offhand, she expressed a preference for Weiss in addition to Tishby and Horn — all “strong voices against antisemitism,” who are “so well-read and well-spoken,” she said.

Eve Barlow, a Scottish journalist in Los Angeles who often writes about antisemitism, suggested the actress Goldie Hawn before settling on the singer and actress Barbra Streisand, who “knows how to stand up against antisemitism” and — perhaps as important — “has the best nails of all time.”

Streisand has said it is “undeniable that antisemitism is one of the most vexing, terrifying issues of our times.”

Roberta Mock, a professor of performance studies at the University of Plymouth in England who specializes in stand-up comedy by Jewish women, said “The View” should consider hiring Sandra Bernhard, the actress and comedian. She also recommended Danya Ruttenberg, a rabbi and the author of Surprised by God: How I Learned to Stop Worrying and Love Religion.

Still, some observers questioned, among other things, whether “The View” was even in need of a full-time Jewish co-host at all.

“I don’t think the answer is to have a co-host of every religion or ethnicity about which others express ignorant or even hateful comments. Or even to banish people so that their education is hidden,” David Wolpe, the senior rabbi at Sinai Temple, a Conservative synagogue in Los Angeles, told JI. ”Rather they should invite people on who can speak intelligently about it and enlighten both viewers and hosts.”

Meanwhile, Emily Tamkin, the U.S. editor of the New Statesman and the author of a forthcoming book, Bad Jews: A History of American Jewish Politics and Identities, expressed reservations over what she described as “a tendency to turn to the person of a certain identity to speak with authority on issues related to that identity.”

There is “no one Jewish perspective,” Tamkin explained, “no one ‘Jewish View,’ if you will.”

“I hope that whoever fills this hypothetical role is fully cognizant of that, and speaks as a Jewish person, and in a way that is informed by being Jewish, but with an appreciation that she cannot speak for or on behalf of Jewish people,” Tamkin said. “No one can.”