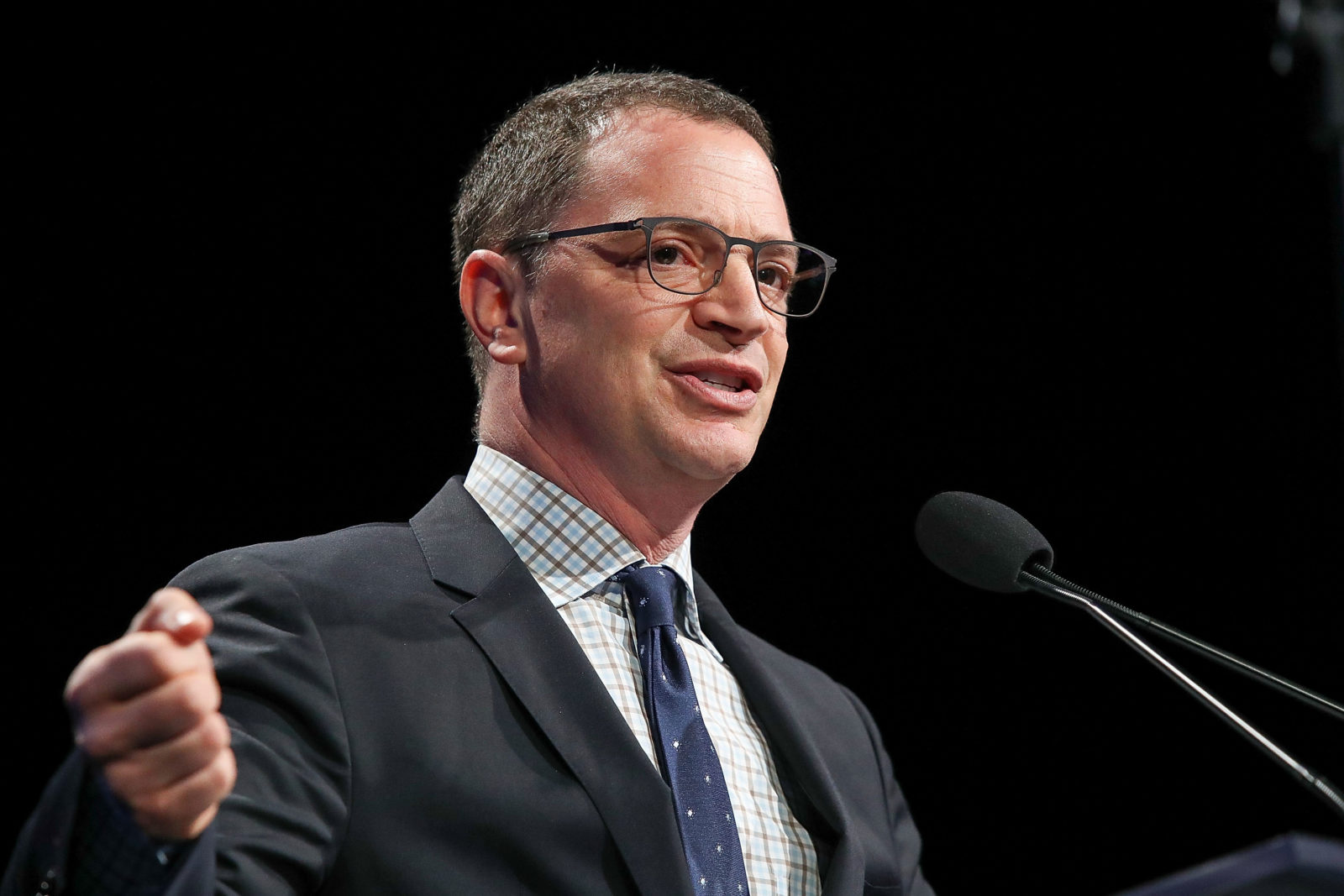 The actor Joshua Malina is perhaps best known for his supporting role as Will Bailey, the precocious presidential speechwriter and White House advisor with a vaunted — and decidedly non-Jewish — military pedigree, in NBC’s cult-status political drama “The West Wing.”

In reality, as dedicated fans are likely aware, Malina, 55, has long been involved in Jewish communal life, describing Judaism as “the key element” of his identity. The former yeshiva boy, who grew up in New Rochelle, has visited Israel several times, and has long expressed dismay that Jews in Hollywood often avoid speaking openly about the Jewish state.

Years ago, the online Jewish outlet Tablet — in which Malina once extolled gribenes as “the sine qua non of Jewish food” — earnestly proposed that he assume the role of White House Jewish liaison. Malina, for his part, welcomed the suggestion, tongue only slightly in cheek.

It was not to be, though Malina has lately been assuming an even more high-profile role as one of Hollywood’s unofficial Jewish ambassadors in what the veteran actor describes as something of a turning point in his long history of public engagement on Jewish issues.

In recent months, for instance, he has joined the board of Americans for Peace Now, the left-leaning nonprofit organization dedicated to promoting a peaceful resolution to the Israeli-Palestinian conflict. All the while, he has forcefully spoken out against antisemitism on his Twitter feed and, most notably, in a combative viral essay for the The Atlantic, where he questioned why Mel Gibson continues to find work in Hollywood despite his status as “a well-known Jew-hater.”

While Malina’s cancelation campaign was well-received, he remains subject to a constant stream of anti-Jewish social media attacks from Gibson’s most impassioned defenders. “Of course, attack an antisemite and, boy, are you going to arouse the antisemites,” Malina said in a recent interview with Jewish Insider. “It’s like, thank you all for proving my point.”

Malina’s safe haven, as one might think of it, is a cleverly named new podcast, “Chutzpod!,” that he is co-hosting with Rabbi Shira Stutman, until recently the spiritual leader of Sixth & I, a non-denominational synagogue in Washington, D.C. Distributed by PRX, the weekly podcast, which debuts today, will engage with current events and other more whimsical concerns through a Jewish prism, including regular Torah discussions, that Malina hopes will appeal to Jews and non-Jews alike.

“One of the things about Jewish observance is the beauty of being part of a community and kahal and this idea that we’re better together than alone — and, during the last couple of years of the pandemic and not a lot of shul-going, or maybe none other than through Zoom, I like the idea, even if it’s virtual, of building another Jewish community,” Malina said. “Not solely Jewish, but anyone who’s interested in Judaism enough to listen to the podcast I’m interested in interacting with.”

Malina became friendly with Stutman in 2017, when they traveled through Israel and the Palestinian territories together on a Jewish leadership tour hosted by Encounter, a nonpartisan educational organization. A couple of months ago, she reached out to ask if he would be interested in co-hosting a Jewish-themed podcast.

While Malina was intrigued, he initially turned down the request because he had recently finished hosting a separate weekly podcast about “The West Wing” and was hesitant to jump into another project so quickly. “I’ve turned down a variety of things,” he said. But after a couple of days mulling over the rabbi’s proposal, he changed his mind.

He even came up with the name, he said. “I will take the credit or the blame.”

For Malina, the podcast is an opportunity to glean insights from Stutman’s interpretations of Jewish liturgy as he positions himself, at points, as a kind of student interlocutor.

“I went to an Orthodox yeshiva for eight years, so I have a certain knowledge base,” he told JI. “I still want this to be something where I’m going to learn. But at the same time, we want it to appeal to people who are maybe in an interfaith marriage or relationship and interested in their partner’s Judaism,” said Malina, who is married to a Jewish convert. “We want it to be interesting to people who did not enjoy Hebrew school, but are looking for a way maybe to find a little relevance in their Judaism.”

The first episode centers on an examination of “Parashat Bo,” the weekly Torah portion that, “counterintuitively, is read in January, but is about the Exodus,” Malina told JI, “of course nowhere near Passover.”

But one phrase in particular, he said, seemed relevant at a moment of profound disunity in American politics. “There’s a specific mention of the phrase ‘mixed multitude’ — erev rav left Egypt with the Hebrews,” he mused. “What is the mixed multitude? Why did some Egyptians leave with the Jews? Were they converts? Were they just non-Jews? Did they add to the experience in the desert?”

“As I was anticipating, you can take two words of the Torah and, under a teacher like Rabbi Shira, who is wise and just absolutely sort of a volcano of creative energy and thought, we have a conversation for an hour pondering what that ‘mixed multitude’ really means and what it means to be ‘other,’” Malina added. “Jews often feel othered as a very, very small part of the world’s population — and also, how do Jews approach the other? Do we villainize them? Do we welcome them? We touched on something that I hope we will talk about further.”

As a new board member on Americans for Peace Now, Malina is also eager to engage in what he imagines will be some challenging if worthwhile conversations pertaining to the Israeli-Palestinian conflict. “I deeply care about Israel, I love Israel, and I would like it — as many people would like it — to more fully realize the democratic ideals on which it was founded,” he explained. “These are issues that are important to me.”

“Anything around Israel and the Middle East and the Palestinians is a very difficult area to discuss, but if you don’t discuss it, then everybody just falls back into the sort of black-and-white narrative that they take to or whatever their point of view is,” he added. “But if you get into the gray area, and it’s really all gray area, then that’s maybe sometimes where you come up with something productive and you have uncomfortable conversations that lead to something positive.”

On a lighter note, the podcast also gives Malina the chance to flex his connections in the entertainment industry. The debut episode includes an appearance from the actor Josh Charles as well as a brief interlude in which the comedian Michael Ian Black explains a handful of basic Yiddish and Hebrew phrases that may be unfamiliar to some listeners.

In preparation for future episodes, Malina has already invited Jon Hamm, a close personal friend, to discuss Yiddish terms as well — a task he is most likely prepared for, given a recent appearance on “Curb Your Enthusiasm” in which he is educated on the intricacies of Jewish slang by Larry David.

Before speaking with JI, Malina said he had emailed the Jewish actress and comedian Sarah Silverman, who caused a stir on her own podcast last fall while criticizing what she described as a “pattern in film” and TV in which non-Jewish actors are cast as Jewish characters.

Malina suggested he was interested in addressing that topic on the podcast. “I’m very intrigued by it,” said Malina, who experienced the reverse scenario on “The West Wing,” though Bradley Whitford, who starred in the series and was raised in a Quaker family, did play a Jewish character. “I think Sarah is very smart and interesting and so I was intrigued to read and to listen to her podcast and hear what she had to say about it.”

“My own response, especially as an actor, is it’s a tough one, because certainly, I’m moved by issues of inclusion and the stories that get told by Hollywood, and I think things are changing,” he said. “The other part of me is like, ‘Well, anyone should be able to play anything if they’re good,’” he added. “I don’t have a knee-jerk response when I see somebody playing a Jewish character that I know isn’t Jewish. There are just times where I go, like, ‘Ach, I don’t buy it.’”

Ultimately, Malina said he “would like to see a lot more Jewish stories being told.”

It goes without saying, too, that Malina would prefer if Mel Gibson were banished from the industry because of his well-documented history of anti-Jewish comments. Malina said his recent Atlantic tirade came about when the magazine’s editor, Jeffrey Goldberg — whom he met, coincidentally, through Stutman — asked him to expand on social media remarks that seemed substantive enough for a full-blown essay.

Malina has no expectation that he will end Gibson’s career, particularly amid rumors that Gibson is in talks to direct “Lethal Weapon Five,” which motivated the piece. Malina anticipates that the industry will “keep its emphasis on making money” rather than grappling with Gibson’s controversial past.

“If he wants to sit down and chat with me, I’m available,” Malina, who has never crossed paths with Gibson, chuckled incredulously. “I don’t know why he would want to.”

Malina has continued to antagonize Gibson since publishing his screed. On Monday, Gibson turned 66 — an occasion Malina recognized with a donation to the United States Holocaust Memorial Museum “in honor of Mel Gibson should go fuck himself,” as a confirmation email from the museum that Malina posted to Twitter read.

Amid rising incidents of antisemitism in the United States and abroad, Malina said he now feels something of an added sense of urgency to raise his voice. “I will say that these are scary times,” he told JI. “I was raised, as many Jews of my generation were, with ‘never again’ and ‘do not forget,’ and so it surprises me at times that you kind of have to remind people, like, antisemitism, you know, it’s real, and it’s ugly.”

Malina has personally experienced that dynamic on Twitter, where he feistily seeks to expose the antisemitic rhetoric that is directed at him and that seems to have intensified since the Gibson essay. “When you talk about antisemitism and then when someone says, ‘Oh, you’re a Zionist,’ it’s like, ‘OK, so you’re equating all Jews with Israel, that’s antisemitism,’” he said. “Rather than ignoring it, which some people would have advised me to do, I’d rather amplify it and say, ‘See, this is antisemitism.’”

Aside from the podcast,, Malina — who has also appeared in “Sports Night,” “Scandal” and “The Big Bang Theory” — is in the process of pitching a new TV series based on what he characterized as a “comic spy thriller” he has optioned. “That’s the big iron in the fire that I’m hoping I can make happen,” Malina told JI, though he declined to provide further detail beyond noting that he would produce and star in the series.

For the moment, he seems enlivened by the range of Jewish issues to which he is now dedicating his time, even as such involvement has created some tensions that he might otherwise prefer to avoid.

“It’s not fun to be attacked by anyone or have people saying negative things,” he said. “But it always makes me think, if you’re getting it from both sides, then you must be existing and functioning in that uncomfortable area of compromise, and to me, that’s the interesting, potentially productive side of things — and that’s the sort of area to explore.”