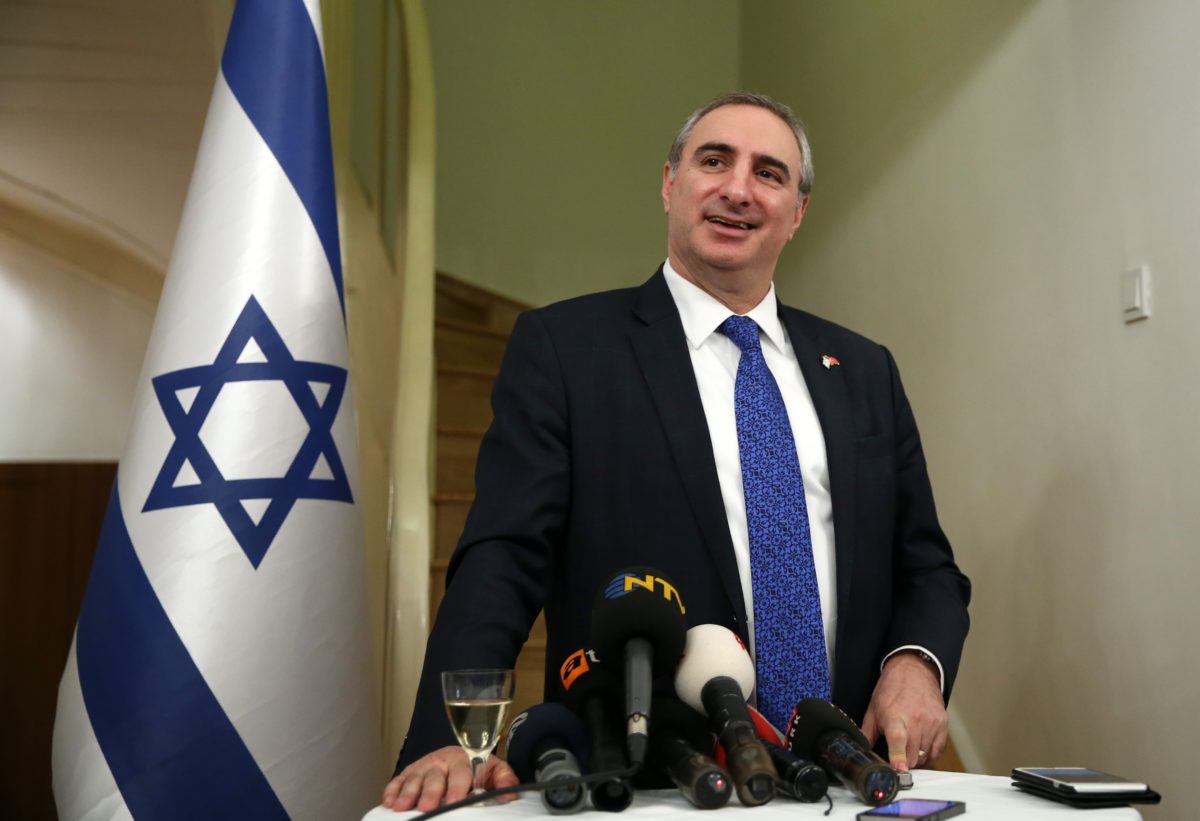 Then-Israeli Ambassador to Ankara Eitan Naeh gives a speech during his first reception in Ankara, Turkey on December 5, 2016.

Less than a month after presenting his credentials to King Hamad bin Isa Al Khalifa, Israel’s ambassador to Bahrain, Eitan Na’eh, is still marveling at his new surroundings. The longtime Israeli diplomat, who was famously expelled from Turkey in 2018, some days cannot believe that he represents his country in an Arab kingdom that less than two years ago had no formal ties with Israel.

“I sit here in Manama and look outside to a beautiful view of the [Persian] Gulf, and I am still pinching myself,” Na’eh told Jewish Insider in a recent interview. “I feel lucky to work in these countries.”

Na’eh arrived in Manama, Bahrain’s capital, last November, vacating his temporary posting in Abu Dhabi, where he spent nine months serving as the first diplomat to represent Israel in the United Arab Emirates. Israel signed normalization agreements with the UAE and Bahrain in September 2020, with Morocco and Sudan joining what is now known as the Abraham Accords a few months later.

“From the first day I landed here, I found myself sitting in homes and living rooms with people from all over the region – Iraqis, Saudis, Kuwaitis, Lebanese and Palestinians – and they all told me, ‘Enough, let’s put our political disagreements aside and do business; that in its place will calm things down,’” Na’eh told JI over Zoom from Manama.

While Na’eh, who will be in Bahrain for the long term, is focused on developing economic and trade ties between the two countries, he is also well aware of the kingdom’s regional and geographic value as a country that sits in the Persian Gulf just off the coast of Saudi Arabia.

“We are looking at Bahrain as a gateway to the region, to the East, and from the East to Israel,” he said.

Aside from the lucrative financial opportunities, including in tourism — Na’eh said direct flights from Tel Aviv to Manama will begin in a few months once the Omicron strain of COVID-19 subsides — Israel has indicated that it would like to see Saudi Arabia, the most powerful country in the region, joining the accords.

“What I’ve learned since coming here is that Bahrain and Saudi enjoy a very close and amicable relationship, and I hope we will find an opportunity to cooperate with them,” Na’eh said. “Israel is obviously open to such cooperation — economic, financial, trade and investment.”

“Coming now from the first two countries – the UAE and Bahrain – that signed the Abraham Accords,” he added, “I would say that the idea is to build a model, a model of coexistence and a model of cooperation, where other countries in the region will begin to say, ‘Why not us?’”

Na’eh told JI that he hears more and more people in the region asking when such relations will be formed between their countries and Israel. It is “bound to happen” eventually, he said of Saudi Arabia.

“The Gulf countries, certainly Bahrain, the UAE and Saudi Arabia, are very advanced and I think together with Israel, we can do wonders,” Na’eh stated, adding that it was important not to ignore the Arab states who first signed peace deals with Israel: Egypt and Jordan.

“There is a real curiosity here about Israel, about the religion, the culture, the food, the holy sites, and the people,” he said of Bahrain, though he cautioned that there remained some contentious issues, such as the ongoing Israeli-Palestinian conflict.

“We don’t expect countries to simply become all lovey-dovey in a day,” said Na’eh, adding, however, that the Abraham Accords had “reversed a trend.”

“In contrast to the past, when countries raced to show who boycotts more, who incites more, or who shows more animosity towards Israel, there are now countries in the region that are racing to invite Israeli companies to work there,” he said.

However, he noted, the desire in Bahrain to build upon and strengthen growing cooperation with Israel is equally vibrant as in the UAE.

“I have found a real will among people here to live in peace and coexistence,” Na’eh noted.  “There is an indigenous Jewish community here that has lived here for many years, and the only synagogue in the Gulf was in Bahrain.”

Na’eh said he is working with counterparts in the Gulf state to create more avenues of cooperation. “I think that there is plenty in the economic sphere and of course, in people-to-people relations, politics and security,” he said. “It is time to move on and time to explore, and the best way forward to live together is to trade together. That’s what the Abraham Accords is all about.”